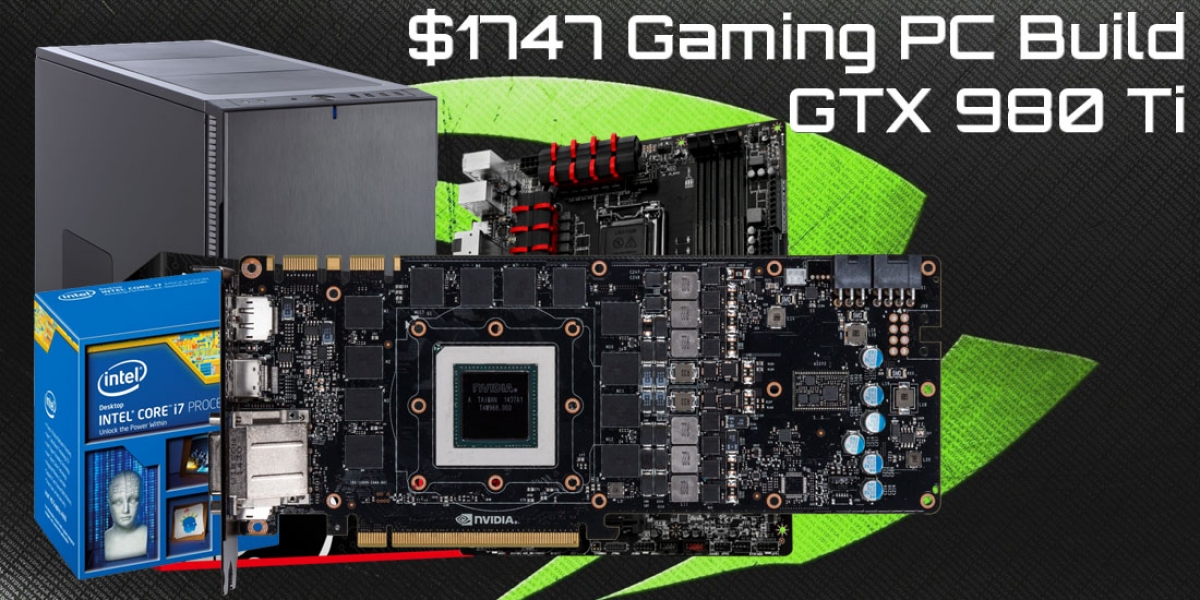 NVidia's aggressive $650 price-point for the new GTX 980 Ti ensures that a build centered around it is more of a reasonable goal rather than a pipe dream.

This $1747 GTX 980 Ti gaming PC build is versatile, with the ability to tackle a variety of high-end gaming experiences. It's useful to think of the build in terms of what monitor will be paired with it, as both 1080p and 1440p G-Sync up to 120Hz are functional pairings. 1080p at Ultra settings and 1440p at High or Ultra (depending on the game) are both achievable on the 980 Ti; as we learned recently, the 980 Ti performs almost as well as the Titan X for a significantly lower price. This build aims to take advantage of that price with a system that does such a powerful card justice while looking badass.

This PC build will easily play The Witcher 3, GTA V, and other modern, high-graphics quality games. 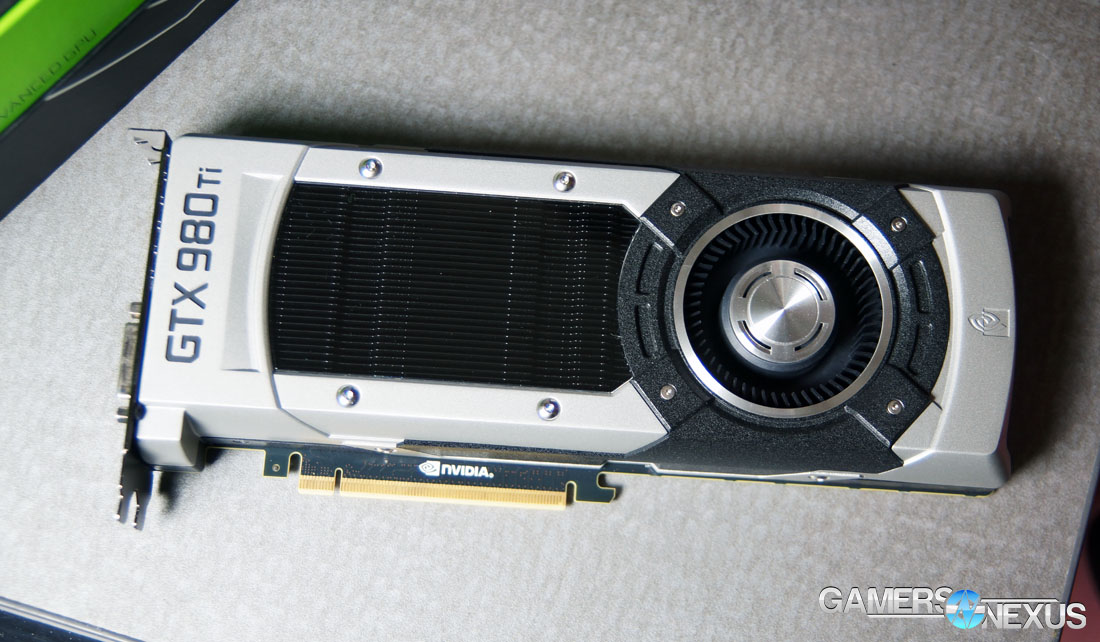 GTX 980 Ti ($650): As the latest Maxwell hotness to drop from nVidia, this video card performs almost as well as the Titan X for considerably less, making it the go-to choice for any high-end machine. Its only major difference from the $1000 Titan X is the halved VRAM to a “measly” 6GB, but you aren't going to need more than that with current games anyway. The 980 Ti trounces its kid brother, the GTX 980, whose MSRP has been lowered to $500 with this new release.

You should be set for connectivity, as the card supports 3x DisplayPort, 1x HDMI 2.0, and 1x DL-DVI ports.

This graphics card is good for 1440p gaming at high refresh rates with a G-Sync capable monitor. You'll have to turn some settings down to High or Very High for some of the most demanding games if you want around 120FPS at 1440p, but it's well worth it. You'll also be able to crush the latest games at 1080p, if 1440p isn't your cup of tea or if you already have a good 1080p monitor.

Intel Core i7-4790K ($340): This is a CPU that we know will almost never hold the GTX 980 Ti back. As a quad-core processor at stock 4.0GHz with solid overclocking potential, system builders can expect some serious performance and longevity out of the 4790K. Intel's Core i7 series has aged very well – the generations-old 2600K is still capable – and we expect this CPU to do the same. For users interested in streaming or video rendering, the i7's hyper-threading proves helpful in its doubling of logical cores to eight.

The 4790K also supports the latest revision of PCI Express, 3.0, along with VT-d for virtualization needs.

Be Quiet! Dark Rock Pro 3 Silentwings CPU Cooler ($90): This CPU cooler performs exceptionally well, looks great, and is reasonably priced for its performance. Be Quiet! Uses silent fans to keep noise levels down, but retains high thermal dissipation potential by using a plus-size aluminum heatsink. The Dark Rock Pro 3 will cool the i7 CPU adequately while staying true to its name and making your PC look like it was built by Batman (Christian Bale, not Val Kilmer).

CORSAIR Vengeance Pro 8GB 1866MHz ($68): You won't find this RAM holding you back, but you will find it looking great. It notably overclocks well, for those into that or who want to try for some extra performance with some workstation tasks. 8GB is all that's needed for gaming, but for some extra breathing room on production tasks, you can opt for the 16GB kit instead, which does have the benefit of being quite a bit cheaper per GB.

Its on-board audio is above average – most users will find the audio chipset commendable, though hardcore audiophiles may still want to investigate expansion cards.

EVGA SuperNOVA 650W GS 80 Plus Gold Modular ($90): This 80 Plus Gold rated unit matches our continuing theme of “performs great and looks great.” It's well-reviewed by a bevy of experts in the field, so you can expect it to be reliable and stable, which is the name of the game when it comes to PSUs. Its 80 Plus Gold efficiency will help save on the power bill, and its full modularity combined with its black braided cables afford a cleaner and more coherent build.

PNY CS2111 480GB ($220): This SSD is a strong combination of affordability, fast speeds, and large total capacity. Your load times will be stupidly short for the most part, and you'll get to experience that oh-so-wonderful snappiness in general computer use that's only found with an SSD.

Unless hoarding games or media, an additional drive isn't necessary. For those who require additional space, we'd recommend a media drive like the WD Green 2TB HDD for storing media and for infrequent transfers of games to and from your SSD; for faster magnetic storage, the WD Blue 7200RPM HDD is preferable for application use.

Fractal Design Define R5 Black Windowed ($100): Cases are a personal choice. It's the one part of a build that's seen every day, so something that isn't an eyesore and is more “timeless” would be ideal. The Fractal Define R5 is a subtle case that won't lose its class with age.

The R5's aim has always been to provide as quiet of a case as possible without needlessly sacrificing cooling ability. As such, it includes noise-reducing padding on the inside of the case to deflect sound. One of Fractal's core approaches to silence institutes padding and case components that are designed to bounce sound waves numerous times before exiting the case; this reduces the strength and amplitude of the wave upon its exit, where it's dispatched in a slight trajectory away from the user.

Being the umpteenth revision of the same line of cases, the R5 has been refined into a quality piece of equipment. It features convenient cable management, 2x140mm fans with seven spaces for additional 120 or 140mm fans. It includes its own dust filters, and you'll find an easier time building and adapting the case to your build with tool-less fan covers and removable HDD and ODD cages, along with SSD mounts on the back of your motherboard to make your build quite a bit cleaner.

This unit comes with a window to see your gorgeous PC insides, but a windowless option is also available here and will be quieter.

If you really want to push the bounds of 1440p, high refresh rate or G-Sync gaming, this is your build. For those who'd like to give 4K a shot, you'll want to consider a second 980 Ti in SLI – just keep in mind that you'll need a beefier PSU to do so.

If you'd like any help choosing parts or building your PC, please feel free to join us in our forums, and if you have any comments or questions or just prefer to post here, you're encouraged to leave a comment below.

Have an awesome day! 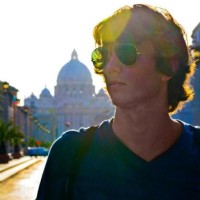