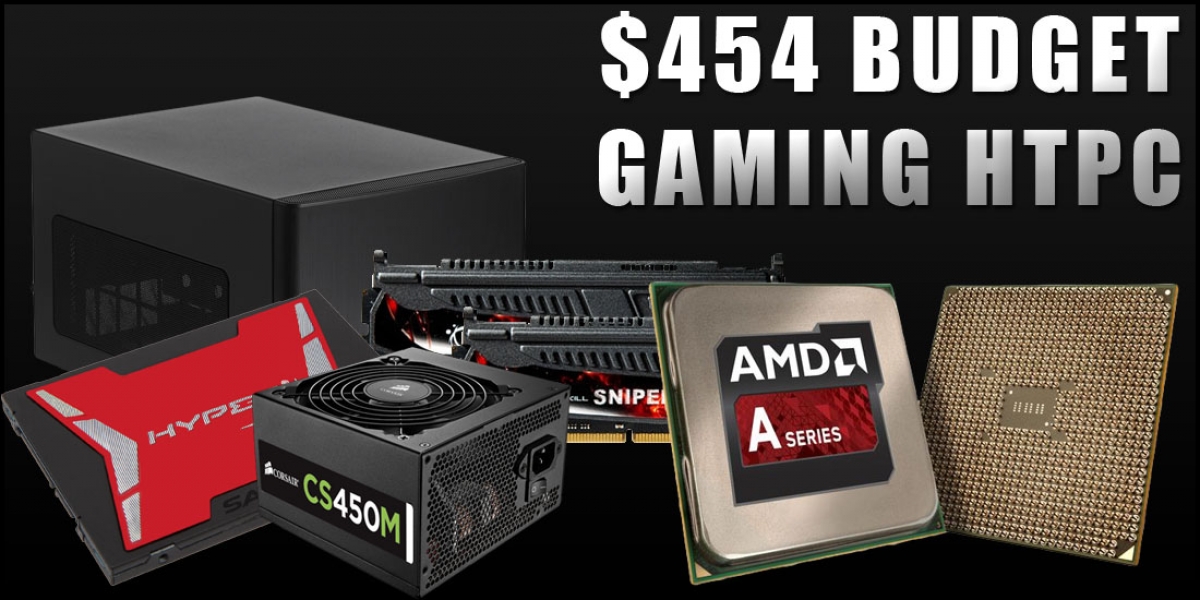 AMD A8-7650K 3.3GHz Quad-Core ($105): AMD's A8-7650K ships with integrated R7 graphics – the IGP – and dedicates a significant portion of the APU's die to graphics processing. AMD's approach to APUs is different from Intel's: Intel, with its HD integrated graphics series, retains a heavier focus on power efficiency and isn't necessarily that great at gaming; AMD, however, allocates around 50% of its total APU die to the GPU component, allowing gaming-grade processing power for users on a restrictive budget.

Both have their advantages, and Intel does excel at the higher-end, but an APU makes for a capable backbone for a cost-limited gaming HTPC. Users considering a GPU add-on may be interested in an 860K + GTX 750 Ti as a more powerful, slightly cost-boosted alternative.

SilverStone NT06 Pro ($53): AMD's APU ships with its own CPU cooler. It's not the best, but it's adequate for basic function for those with lower noise standards. In the event silence is a requirement, we strongly recommend an upgrade to a higher-end CPU cooler – SilverStone's NT06 comes to mind – to ensure quiet operation for living room use. Silence is important in an environment where non-gaming media consumption occurs, especially when relying upon a more traditional speaker configuration. The kind where they're not mounted on your head, anyway.

G.Skill Sniper 8GB 2133MHz ($56): Despite our findings when testing dual-channel configurations, APUs and IGPs still require fast, multi-channel memory for adequate graphics processing capabilities. CPU-integrated graphics require faster system memory to make-up for the loss of on-card graphics memory. With an add-in board, a GPU is able to transact on the significantly faster GDDR5 or HBM RAM, something that's lost when switching to a CPU-only solution. For this reason, it is strongly advised to configure an APU with dual-channel access – two or four sticks – and with an 1866 to 2133MHz baseline speed.

ASRock FM2A88X-ITX Motherboard ($84): AMD's A88X platform and FM2+ socket are better-equipped than its decaying AM3+ line. FM2+ and A88X in combination will allow for natively-supported USB3 – something AM3+ lacks – and still offer overclocking functionality for higher-end APUs. This ASRock board comes in a mini-ITX form factor and is suitable for our home-theater PC build objectives. There's only one PCI-e slot, so that limits usage to either a dedicated GPU (at which point an alternate CPU may be in order) or some form of add-in card, like a video capture card to serve as a DVR.

Corsair CS450M PSU ($50): Home theater PCs thrive on power efficiency and modularity when it comes to a power supply. Because an HTPC demands lowered thermals and power waste for longer up-times, we opted for an 80 Plus Gold PSU with a lower wattage – 450W – for fine-tuned utilization with an APU-only build. Modular cables will allow for a cleaner install, something that's important when dealing with small form factor enclosures. Corsair's CS450M also hosts a quieter fan, another important aspect of SFF PCs.

Kingston HyperX Savage 240GB SSD ($100): We recently awarded the HyperX Savage SSD with our Editor's Choice award, following its competitive arrival to a rapidly-growing market. An SSD is technically an “optional” component for a budget PC – something like WD's Blue 1TB HDD offers greater capacity and a lower cost – but we don't see SSDs as “optional” for a living room-targeted build.

An SSD operates with dead-silence. The nature of a solid-state drive means that we're firing electrons and modulating voltage to access data, as opposed to a physical header reading a spinning platter. SSDs also offer near-instant boot times; our in-house HTPC turns on in fewer than nine seconds (Win 8.1) and is ready to game.

Fractal Design Node 304 Case ($60): Fractal Design is, perhaps, best-known for its Define R4 enclosure. The company outputs a “boutique” vibe, focusing its efforts on discretion and silence. The Node 304 grants some level of modularity – removable drive bays, for instance – but retains a compact form factor. At just ~9.8” x 8.3” x 14.7”, the Node can easily be tucked-away under a TV. The enclosure supports mini-ITX motherboards only and, despite its smaller size, can still support larger video cards by way of removing hard drive cages.

Leave a comment below for quick support, but consider visiting our forums for more in-depth help.