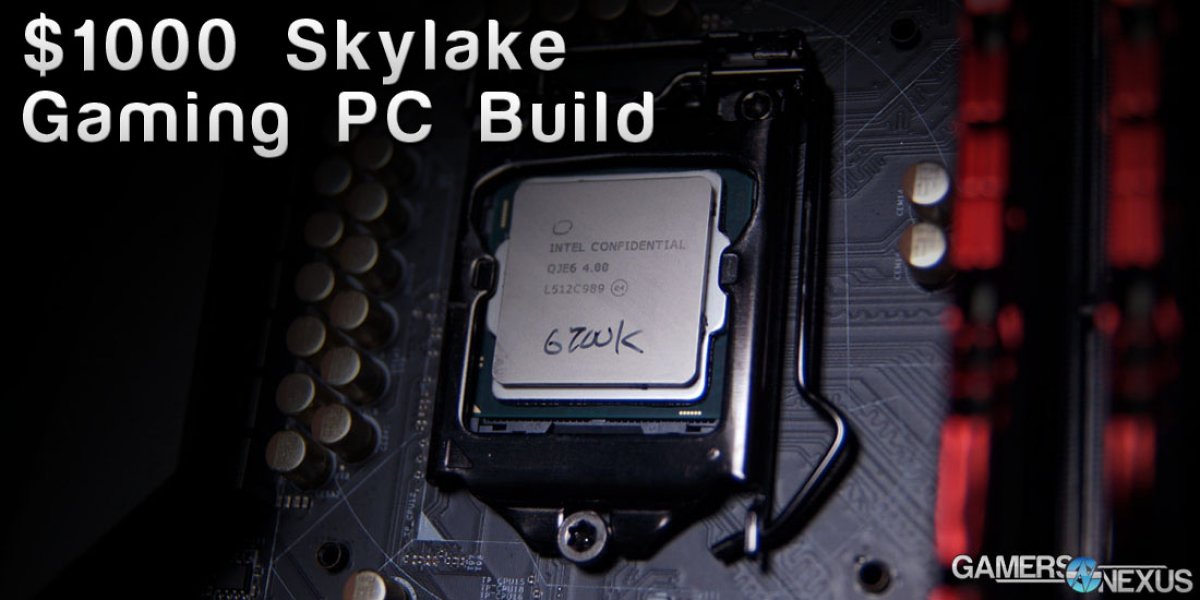 PowerColor PCS+ R9 390 ($310): Starting off, we have the PowerColor PCS+ R9 390. This video card comes with a high-performing cooler that will keep load temperatures reasonable with its triple-fan design. It also comes with a solid 8GB of VRAM on a 512-bit bus, and an effective memory clock of 1.5GHz. We have a comparison of the R9 390 compared to the R9 290X, R9 380, Titan X, 980 Ti, 980, and 970 (among others) over here. It generally performs similarly to an R9 290X and a bit better than a GTX 970. It’ll support DX12 and Vulkan and has 1xHDMI, 1xDisplayPort, and 2xDVI-D, so there is little worry about when it comes to support for imminent standards. At $310 on Newegg, the PowerColor PCS+ 390 is reasonably priced, and currently has a $20 promotional gift card.

Phanteks PH-TC12DX ($50): The i5-6600K is an unlocked CPU that, unlock previous Intel CPUs, does not included a CPU cooler. We’ve picked out the Phanteks PH-TC12DX in white. The white version is cheapest (compared to the identical, different color coolers) and fits the black-and-white theme established by the board. With two fans, four 6mm heat-pipes, and a copper & aluminum construction, the Phanteks PH-TC12DX performs well and has looks to match. It uses 120mm fans that are easily replaced. The unit includes thermal paste, so there’s no need to worry about that.

Crucial Ballistix Sport 8GB DDR4 ($55): As for RAM, we are picking out Crucial Ballistix Sport 2x4GB DDR4 2400 RAM. It is fairly standard as far as RAM goes, with the primary difference from what we’re used to being DDR4. The Ballistix Sport runs with a CAS latency of 16 and a voltage of 1.2v. Having two sticks allows for the use of dual-channel platforms. It has a black, white, and grey color scheme that goes along with the theme.

Seagate Barracuda 1TB ($50): Of course, some form of storage is needed. We will be going with the standard 7200RPM 1TB hard drive. In this particular case, we’ve opted for a Seagate Barracuda 1TB drive at $50. While this hard drive isn’t as fast as an SSD, its accessible cost makes it a solid starter for users with more limited funds.

NZXT S340 ($70): For the case, we’ve opted again for the NZXT S340 (review here). Among its most notable features is a lack of 5.25” bays, a primarily steel construction, and a PSU shroud to help hide cable clutter and unsightly PSUs. The S340 has a largely minimalistic style, with the only external branding being a small NZXT logo at the bottom of the front panel. The unit supports ATX, Micro-ATX, and Mini-ITX motherboards, along with 2xUSB 3.0 and 2x3.5mm. It also comes with 3x3.5” and 2x2.5” bays. The S340 has solid support for watercooling and industry-leading cable management options.

As stated before, Skylake isn’t bringing any monumental changes, but it does bring new technology standards -- DDR4 -- to the forefront. So, to stay with the times – darn those kids with their sky lakes and zen chips! – we’ve made a mid-budget gaming PC build. The mainly minimalistic, white and black theme is fairly simple, but has a bit of a striking look to it. Its focus is gaming, which seems appropriate for a nexus of gamers.