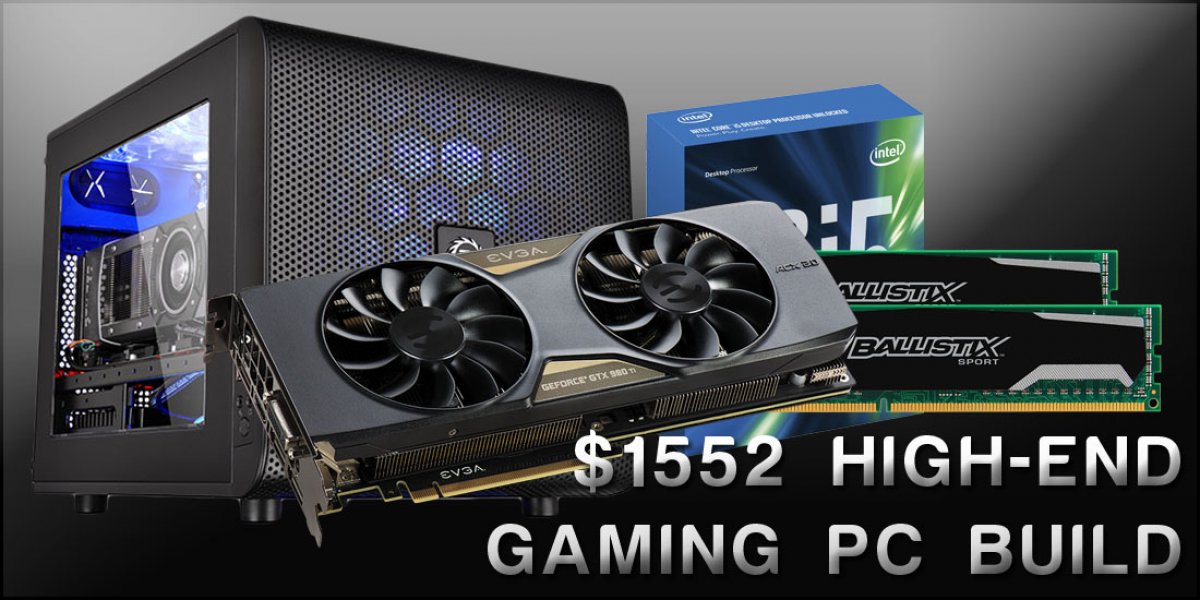 EVGA GTX 980 Ti FTW ACX 2.0+ ($680): The 980 Ti is currently among the most powerful GPUs available. It competes with the Fury X, trading blows depending on game, setting, and resolution. This GPU provides a satisfying experience at 1080p and 1440p – 4K isn’t quite there yet, but it’s close; some games are more friendly with 4K than others. The EVGA 980 Ti FTW ACX 2.0+ has a base clock of 1190MHz and a boost clock of 1291MHz, along with a 7010MHz effective memory clock. The reference 980 Ti uses a 1000MHz clock, making for a 190MHz pre-overclock that actually does impact FPS quite a bit. The card also comes with a dual-fan design to help keep it cool under load. Reflecting its high-end pricetag, the EVGA 980 Ti FTW comes with a backplate.

Intel i5-6600K ($260): Intel’s latest architecture update is Skylake, as reviewed here. Considering the price of this build, it would be a little strange to not use the latest i5 available. The i5-6600K has 4 cores, each with a single thread. It comes in at 3.5GHz but, depending on heat, load, and voltage, the processor can turbo up to 3.9GHz. It has a TDP of 91W and supports dual-channel memory. The i5-6600K is unlocked, allowing for its multiplier to be changed for overclocking.

Since unlocked CPUs like the 6600K are best used for overclocking, it doesn’t come with a CPU cooler, so we’ve included one below.

The below chart saw each card coupled with a GTX 980 Ti reference card. 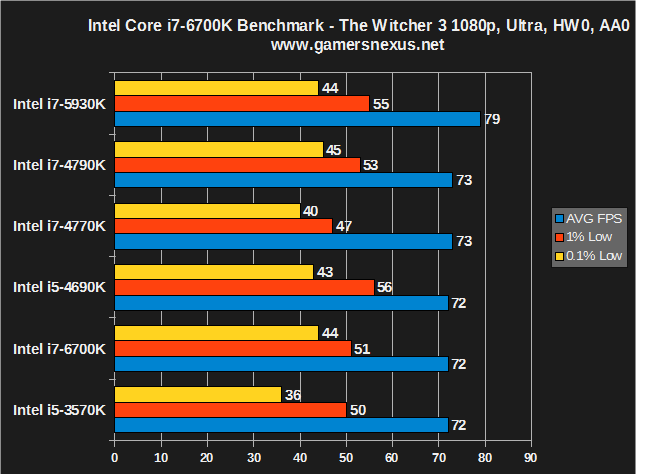 Cryorig H5A Universal ($47): The new unlocked Skylake CPUs don’t come with a stock CPU cooler anymore, getting one is required. For the CPU cooler this go-around, we have chosen the Cryorig H5A Universal. It is made out of aluminum and copper, uses a 140mm fan that spins up to 1600RPM, and is 160mm tall. The Cryorig H5A fits in the case and provides reasonable cooling performance for basic overclocking. The H5A Universal also uses a black / silver color scheme and has a three-year warranty when unregistered, which doubles to six years when registered.

Gigabyte GA-Z170MX Gaming 5 ($150): For this build, we have opted to use an mATX Z170 motherboard that’ll do well for overclocking. The Gaming 5 is Z170, allowing the i5 CPU to be overclocked and fully tapped-into. Other chipset differences are covered in our Skylake chipset comparison, but for this build, the most significant is OC support. For overclocking, the Gaming 5 has a heatsinked 8-phase VRM and unlocked UEFI tuner.

The Gaming 5 has 3xSATAe, 6xSATA 6Gb/s, and 1xM.2 slot -- which are becoming more desirable. It also has 3xPCIe x16 slots, with the top slot being x16, the middle x8, and the bottom x4. There is also 1xPCIe x1 slot. Other than this, connectors and slots are fairly standard: 4x DDR4 DIMMs, 2x USB 3.0, 2x USB 2.0, 3x system fan, and front panel slots. Interestingly, there is also 1x Thunderbolt add-in card slot, for those who desire Thunderbolt. The theme is the reasonably common gamer-esque red, black, and white (mainly red and black). The Gaming 5 is also an mATX motherboard, so this PC build is a smaller form factor.

The Crucial Ballistix Sport 8GB comes with 2x4GB sticks, which run at 2400 MT/s. They have a CL16 latency. Overall, pretty standard. A kit of 2x4GB sticks means it has the ability to run in dual-channel on the platform (benchmarked here). The RAM also has a plain and attractive heatspreader, and to add to all this, Crucial provides a lifetime warranty.

Western Digital Blue 1TB 7200RPM ($53): I was hoping for SSDs to have replaced them by now, but hard drives are still a necessity for most gamers. A significantly large storage medium with low cost-per-GB is needed, and for this we’ve opted for the WD Blue 1TB HDD. The 7200RPM allows for relatively uninhibited gameplay and game storage, though the drive won’t be breaking any speed records (so non-I/O intensive programs/files should be put on it), but it is much cheaper $/GB compared to SSDs.

Samsung 850 Evo 500GB ($175): Speaking of SSDs, our next item is the Samsung 850 EVO 500GB. While the HDD is meant for mass storage, this SSD is better suited for more intensive I/O operations – such as the operating system, Adobe applications, your few favorite games (keep the rest on the HDD), and core applications (browsers, office software). The Samsung 850 EVO comes in a 2.5” form factor with sequential reads up to 540MB/s and sequential writes up to 520MB/s. Random read speeds are rated at 100k IOPS and random write speeds at 90k IOPS. The Samsung 850 EVO series is also among the first SSDs to use the 3D VNAND NAND type, which is denser than TLC and offers greater durability. To reflect the added durability, Samsung has a fairly lengthy five-year warranty on the 850 EVO.

Thermaltake Core V21 ($58): Gaming PCs need not be hulking behemoths – although my case doesn’t put out that idea, and neither does the B2 Spirit we just reviewed. For this build, we’ve gone with the Thermaltake Core V21, an mATX case. The case has a front I/O of 2xUSB 3.0 and 2x 3.5mm. The Core V21 supports 3x2.5”/3.5” bays. One minor downside is the inclusion of only one fan, a 200mm fan placed at the front of the case. Our CPU & GPU cooling solutions ensure that the intake from the included fan will sufficiently dissipate heat within the case. The Core V21 supports CPU coolers up to 185mm tall, GPUs up to 350mm long, and PSUs up to 200mm. Interestly, the V21 allows for the motherboard to be placed both vertically and horizontally. The Thermaltake Core V21 comes with a three-year warranty.

Our first high-end Skylake based gaming PC build has arrived and includes an unlocked i5 and 980 Ti. This PC build will provide a powerful gaming experience at 1080p and 1440p.