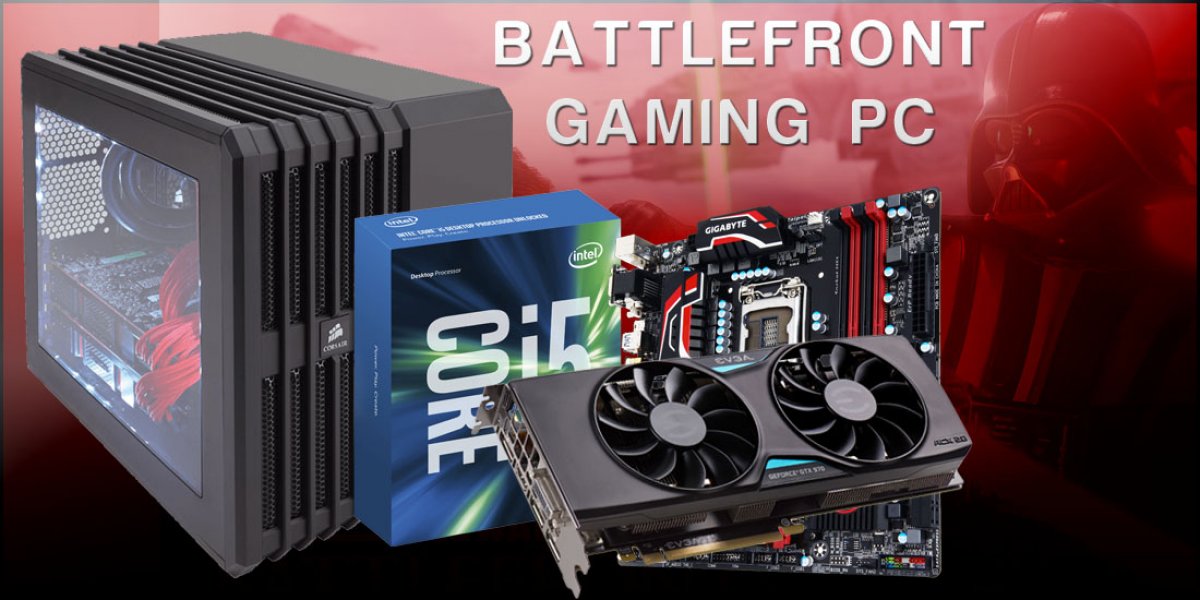 EVGA GTX 970 4GB SSC ACX 2.0+ ($318): First up is the GTX 970, a popular choice for graphics cards. The EVGA 970 ACX 2.0+ is among the lowest-priced 970s currently on market and also hosts EVGA’s dual-fan cooler (“ACX”). ACX, like the ASUS Strix coolers, switches to passive cooling when the GPU is under minimal load (~<30W). This means that a gamer could easily run desktop tasks and low-load games (like LoL) without the GPU fans ever kicking on, reducing thermals overall.

The card comes with a significant factory core overclock of 1190 MHz, with a boost clock of 1340 MHz. The memory has an effective clock speed of 7GHz. The 970 uses nVIdia’s most recent Maxwell architecture -- something we describe here as having increased per-core efficiency over Kepler, as it pertains to gaming. All of this makes the EVGA ACX 2.0+ a solid choice for gaming at 1080p and 1440p. Our most recent Star Wars Battlefront benchmarks show the performance of this exact card at ~57FPS (average) running 1440p / ultra, or ~86FPS (average) running 1080p / ultra.

Intel i5-6600K 3.5GHz ($260): We’ve gone with Intel’s latest unlocked i5 for this build, a CPU that uses the Skylake architecture, as reviewed here. The i5-6600K is an unlocked processor, so to overclock, only the multiplier needs to be changed; there are certainly more options on higher-end motherboards (like the one we picked), but entry-level OCing is trivial. The i5-6600K doesn’t come with a stock cooler because it is made for overclocking anyway, so we’ve included an aftermarket cooler below. The Core i5 is a four-core processor, each of which has one thread each (4C / 4T).

DeepCool Gamer Storm Gabriel ($40): Since the i5-6600K doesn’t come with a stock cooler, we’ve chosen the DeepCool Gamer Storm as the CPU cooler for this build. The cooler is made of aluminum and copper and sits at 119mm tall, fitting inside the Air 240 case. The DeepCool cooler uses a 120mm PWM fan and runs relatively quietly.

Gigabyte GA-Z170MX Gaming 5 ($150): Using a K-SKU CPU, it wouldn’t make the most sense to choose a non-Z170 motherboard -- we lose overclocking support by doing this, which is the whole point of a K-SKU CPU. Of course, there are other differences between the Z170 chipset and others in the 100 series, as we cover in our comparison, but the primary differentiator in this instance is the ability to overclock. The Gigabyte Gaming 5 has an 8-phase CPU VRM with a dedicated VRM heatsink for choke, MOSFET, and capacitor cooling.

The Gigabyte GA-Z170MX Gaming 5 has 6xSATA 6Gb/s, 3xSATAe, and 1xM.2 slot. It also supports multi-GPU setups with 3xPCIe x16 slots, with the top being wired for x16, the middle x8, and the bottom x4. There is also 1xPCIe x1 slot. Like most other motherboards, it features 2xUSB 3.0, 2xUSB 2.0, 3x system fan, 4x DDR4, and front panel slots. One unique feature is that it supports 1xThunderbolt add-in card.

Kingston HyperX Fury 1x8GB 2666 DDR4 ($53): Skylake is the first mainstream computer CPU architecture to support DDR4. For this build, we have chosen a single 8GB DDR4 2666 DIMM of RAM. The single stick will allow for future upgradability to larger memory capacities while retaining a lower price. For those concerned about loss of dual-channel throughput, check out our definitive benchmark on the subject.

The Fury stick has a CAS latency of 15 and runs at a voltage of 1.2v. Overall, pretty standard. It’s black, so it will fit with basically any theme.

Seagate Barracuda 1TB ($50): Every PC needs some form of storage, be it a hard drive, SSD, or 20-year-old floppy disk. For the storage in this build, we’ve chosen the Seagate Barracuda 1TB 7200 RPM drive. Its primary advantage is the low cost-per-GB. For those wanting their computer to be a bit snappier when opening programs or loading the interior to an incredibly modded Skyrim home, we have included the Samsung 850 Evo 500GB SSD as an optional add-on.

Corsair Carbide Air 240 ($90): A small footprint is desirable in computers, especially when there is little to no reason for them to be larger. Unfortunately, smaller form factors run slightly more expensive than their larger counterparts. Sure, you could go for a cheaper case, but a tight case places greater thermal load on the system to begin with; Corsair’s Carbide Air 240 ensures thermals will not be a concern. The Carbide Air 240 is an mATX case that has the unique option of user-specified orientation. The case’s feet can be relocated from one side to another, allowing the window to either be on top (horizontal motherboard orientation) or on the side (vertical orientation), depending on how you want it displayed.

A heavy focus is placed on cooling, shipping with three stock fans and a “push” path for dissipation. With the aftermarket cooler we’ve selected from Cryorig and the ACX 2.0 GPU cooler, this case will work well to keep everything cool.

Our high-end, Skylake i5-based gaming PC is paired with a GTX 970 to provide a powerful gaming experience at 1080p and, to a lesser extent, 1440p at a mix of high and ultra settings.

Feel free to post a comment below for help or questions! For more in-depth, one-on-one support, our PC build forums are also a good place to receive PC advice.