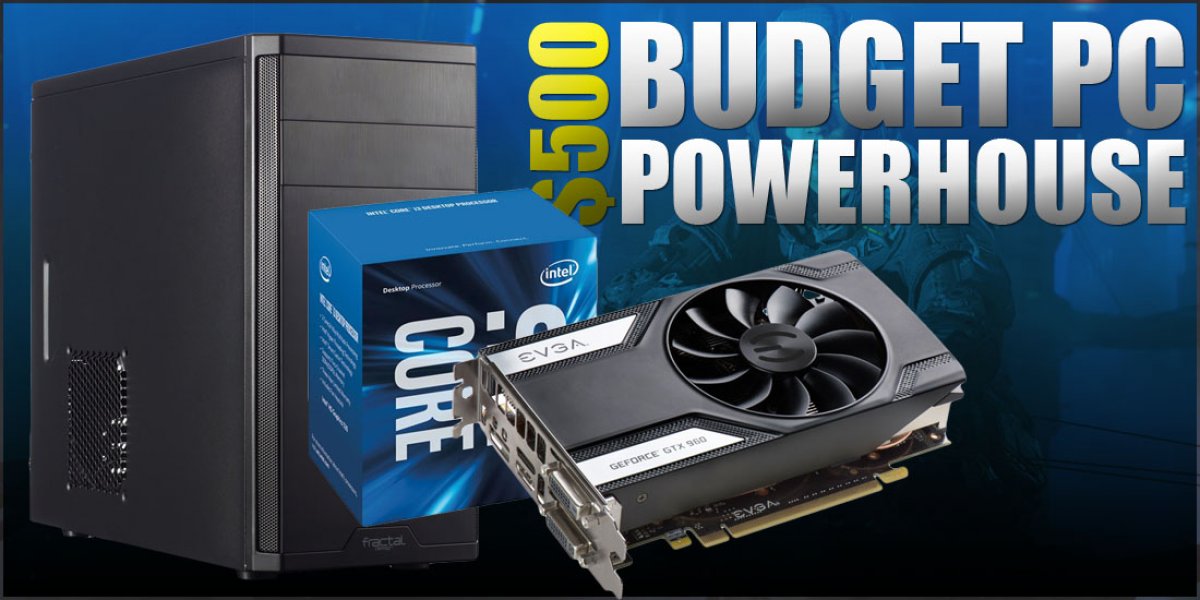 Building PCs is almost always a compromise between performance and cost. In this PC build, we’re making a gaming PC for approximately $500 -- but a good one; a powerful, $500 gaming PC. This $500 PC is meant to be a barebones build that still allows for a very capable 1080p gaming experience in most games at medium to high settings, although it will generally struggle – depending on the game – at resolutions and settings above that.

Today’s $500 gaming PC build uses an i3-6100 running at 3.7GHz, along with a 2GB EVGA GTX 960 with a noteable factory overclock. Together, these parts offer solid gaming performance at 1080p, while also being budget friendly. The build will readily play Call of Duty: Black Ops III, Rocket League, DOTA2, CSGO, and even heavier titles like GTA V.

EVGA GTX 960 Superclocked Gaming AXC ($180): The first part in this $500 PC build is the graphics card, one of the most important components governing gaming performance. Even a budget gaming PC will need a good GPU – among other parts, admittedly – for games to run smoothly. In this case we’ve chosen the EVGA GTX 960 Superclocked. This is the 2GB version of the 960, but the 4GB version is significantly more expensive for mostly insubstantial performance gains. We cover this more in-depth in the 960 2GB vs 4GB benchmarks.

This graphics card comes with a decent factory overclock, running a 1216MHz base clock and a 1279MHz boost clock. It uses a small, single-fan cooler, but luckily this 960 only has a TDP of 120W, so a big cooler is unneeded. The EVGA GTX 960 will perform admirably at high and medium settings for most games running at 1080p, but it generally won’t be adequate for resolutions above that. For specific numbers, feel free to browse our recent benchmarks including the 960, such as our 380X, other 380X, and 960 benchmarks.

Note: EVGA’s B-Stock GPUs (refurbished EVGA graphics cards that are being resold) provide a cheaper option for a 960. Currently, the EVGA GTX 960 Gaming ACX 2.0+ is available for $160. It features a better dual-fan cooler and a worse, but still moderate, factory overclock of 1127MHz base, 1178MHz boost clock; B-Stock only comes with a 1-year warranty in contrast to the EVGA GTX 960 Superclocked Gaming 3-year warranty.

Intel i3-6100 ($125): Of course, the GPU isn’t the only part that of a PC that determines gaming performance; a good CPU is also important to a solid gaming PC. In this case, we’ve chosen the Intel i3-6100. The i3-6100 is a dual core CPU with hyperthreading, allowing it to be seen as four threads by programs and perform better than a dual-core CPU. The CPU is clocked at 3.7GHz and is based on Intel’s latest Skylake architecture although, as shown in our benchmark, Skylake didn’t have large gains over previous architectures. Overall, the 6100 will perform capably in games with this GPU pairing but, like the GTX 960, it won’t be winning any performance records.

Starting with Skylake CPUs, Intel no longer includes stock cooler with overclockable CPUs. In this case, a stock cooler is included, so there isn’t a need to include an aftermarket CPU cooler.

HyperX Fury 8GB (8GBx1) DDR4-2133 ($31): Currently, the go-to “standard” RAM capacity for gaming is 8GB (total system memory), and so in this case, we’ve gone with 8GB of HyperX Fury DDR4-2133 RAM. The memory has a CAS latency of 14 and runs at 1.2v. We chose this RAM kit in part because it features 1x8GB stick, so the system can still be upgraded to 16GB down the road (since the motherboard only has 2xDDR4 slots). Only having one memory stick does mean the system will run in single channel but, as we’ve shown, the difference between dual-channel and single-channel isn’t significant for gaming. This RAM kit also comes with a lifetime warranty.

EVGA 430W 80+ ($35): On account of only having one hard drive, an i3, and a 960, this build actually doesn’t require a large power supply (although even higher-end PCs don't generally need 1500 jigawatt power supplies). We’ve chosen the EVGA 430W PSU. It is a pretty basic power supply, in that it is only 430W, isn’t modular, and only has an 80 Plus certification. That being said, 80 Plus certification isn’t overly common at this price point and the unit has a number of important protections like UVP (under voltage protection), OPP (over power protection), and SCP (short circuit protection), a single 6+2 PCIe power connector (meaning it will work with most GPUs around the power consumption level of a 960), and a 3-year warranty.

Feel free to post a comment below for quick help or questions! For more in-depth, one-on-one support, check our PC build forums.