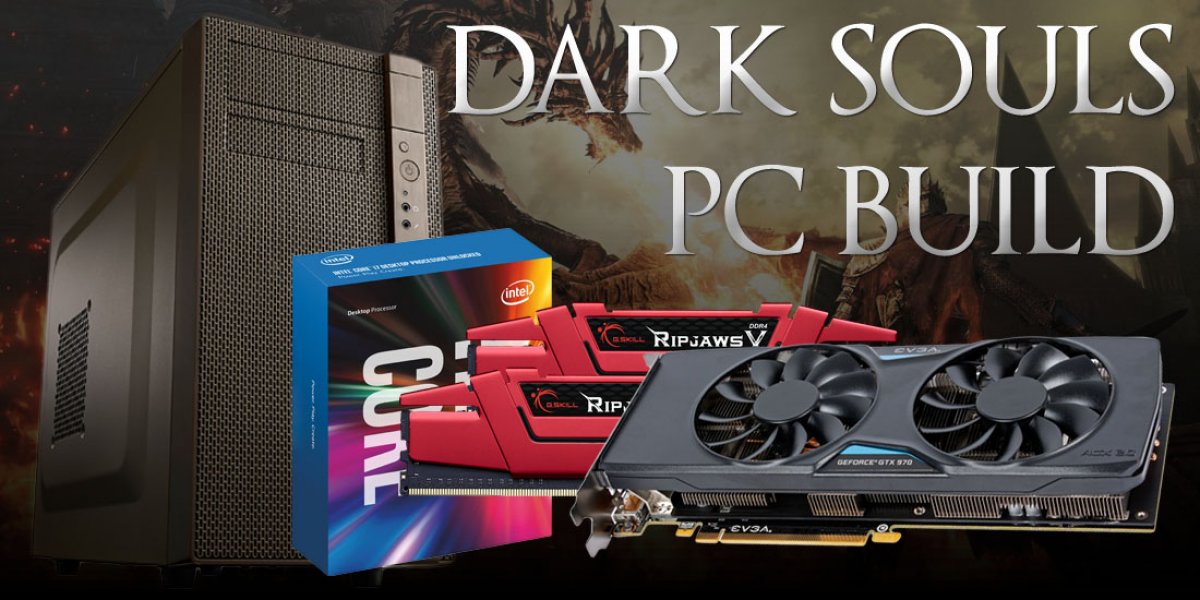 The Dark Souls series is known for challenge and development of player skill, but it is also infamous for its poor PC ports (read our review on this here). On the PC, the Dark Souls games have suffered from sub-par controls, FPS locks, and generally disappointing optimization -- but the third game in the series has improved things for PC. With the recent Dark Souls III launch, we decided to throw-together a $1037 gaming PC for Dark Souls III (and other higher-end gaming).

Today’s $1037 gaming PC build uses an i7-6700K with an EVGA GTX 970 to produce a solid gaming experience for most games, including Dark Souls III.

How to Build a Gaming PC

The above video tutorial comes from our comprehensive, updated (2016) "How to Build a Gaming PC" guide.

Currently, nVidia 970, 980, and 980 Ti graphics cards – this one included – come with a free copy of Tom Clancy’s The Division, if that’s of interest.

If you’d prefer AMD for cost or for performance in other games, we’d suggest looking into the R9 390 or R9 380X (for a cheaper option -- but you should down-class the CPU in turn, if buying a 380X).

Intel i7-6700K ($357): Skylake, Intel’s latest desktop CPU architecture, was an improvement, but performance wasn't game changing. More significantly, Skylake has continued to bring new technologies like M.2, SATAe, and DDR4 into commonality. Intel’s i7-6700K – their Skylake unlocked i7 – comes with a base clock of 4.0GHz and boosts just 200MHz higher (to 4.2GHz). Boost is for heavy-load situations in which temperature and voltage can be increased to boost the clock speed. The i7-6700K runs 4 cores, like the i5-6600K, but each core has 2 threads (hyper-threaded) thus allowing the i7 to operate 8 total threads. In a recent Ask GN video, GN’s Steve explains hyperthreading and simultaneous multithreading for those interested. The additional threads will enable video production or streaming tasks for gamers interested in media creation. The i7-6700K is unlocked, making it easy to overclock for those unhappy with stock speeds. The 6700K has a TDP of 91W and an MSRP of $350.

Intel’s unlocked CPUs – the ones ending in K – no longer come with stock heatsinks since they are meant to be overclocked anyway. We’ve included a CPU cooler below.

Cooler Master Hyper T4 ($25): Because Intel no longer includes a stock cooler with K-series CPUs, this build has to include a CPU cooler -- otherwise the smell of fried silicon may fill the rooms of sad gamers. For cooling and basic, entry-level overclocking of the i7-6700K, we’ve chosen the Cooler Master Hyper T4. This compact cooler features four heatpipes that directly touch the CPU heatspreader and feed into a decently sized aluminum heatsink. The T4’s 120mm fan is rated for 600-1800 RPM and 24-70 CFM. Overall, the T4 doesn’t blow away the competition – after all, it only has one fan and uses cheap materials – but it should do admirably for cooling the stock i7-6700K and even allow for mild overclocks.

ASRock Z170M Pro4S ($100): To connect all of these parts, we’ve chosen the ASRock Z170M Pro4S. We cover the difference between Skylake’s different chipsets in our Skylake chipset comparison for the curious, but the primary difference for the Z170 chipset versus the other Skylake chipsets is that Z170 allows for overclocking. HSIO differences also exist, but are less relevant to this build. The ASRock Pro4S features 4xDDR4 slots (that support dual-channel and overclocked RAM up to 3466MHz), 2xPCIe x16 (which run at x16 and x4), and 2xPCIe x1 slots. For storage the Pro4S has 6xSATA (some of which are disabled if a SATA based M.2 drive is used) and 1xM.2 (supporting both SATA 6Gb/s and PCIe 3.0 x4) slots. The ASRock Pro4S is an mATX motherboard, allowing it to fit comfortably in the Cooler Master N200.

On the I/O side of things, the Pro4S has the standard fare, including 1xHDMI, 1xDVI-D, 6xUSB 3.0, audio ports, and – somewhat surprisingly – 1xPS/2 port. The Pro4S includes a 3-year warranty.

The ASRock Z170M Pro4S is stylized with a lovely burnt orange and black color scheme that would go wonderfully with our RAM, back and blue GPU, silver and black heat sink, and black case. Unfortunately – or rather fortunately – this marriage of colors won’t be seen since the Cooler Master N200 doesn’t have a side window.

G.Skill Ripjaws V 8GB 2400MHz ($30): This G.Skill DDR4 RAM is fairly basic. It’s got a CAS latency of 15, a speed of 2400MHz, and voltage of 1.2v. It features a heatspreader that’s more for looks than function – largely just for aesthetics – and has a black PCB. This G.Skill 8GB kit is 2x4GB stick, meaning dual-channel will work, but for the most part, dual vs. single channel doesn’t have a significant performance impact.

Seagate Barracuda 1TB 7200RPM ($48): In the last couple of years, SSDs have become more and more commonplace in high-end PCs, but they are unfortunately still not positioned to completely replace hard drives. For this reason, we’ve chosen the Seagate Barracuda 1TB hard drive for mass storage on this gaming PC. This hard drive has a 2-year warranty, speed of 7200RPM, and 64MB of cache. The hard drive in this build is meant for mass storage of non-I/O intensive programs and data such as music, video, and rarely-used software/games.

Post a comment below for quick help or questions! For more in-depth, one-on-one support, feel free to check out our PC build forums.