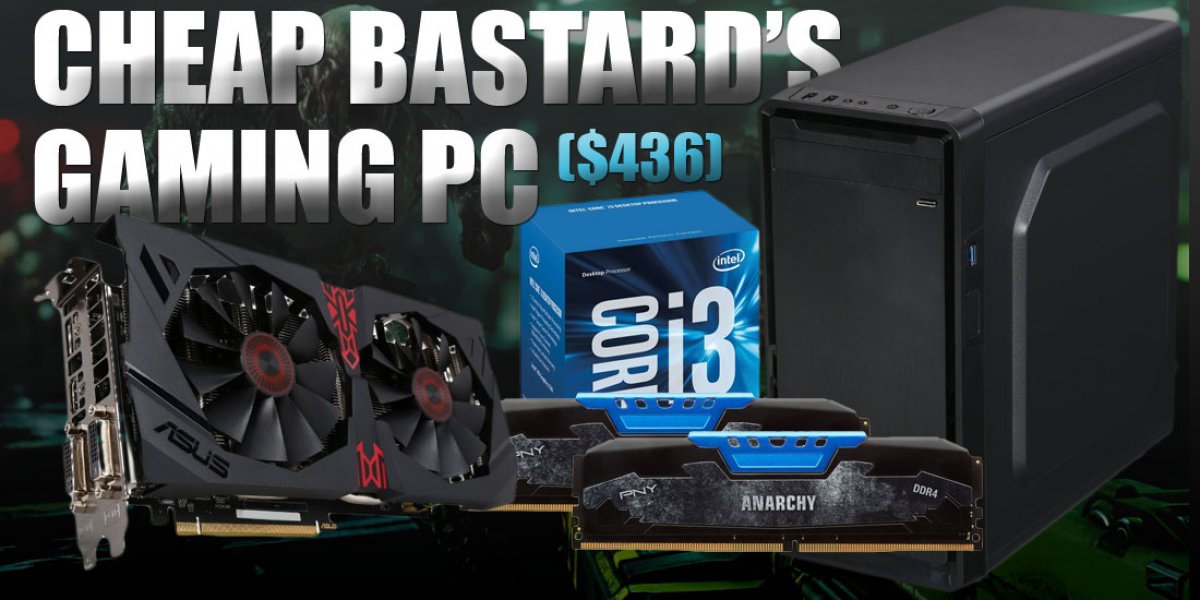 Today’s “Cheap Bastard” gaming PC build comes to a total of about $436, and uses an ASUS R9 380 Strix along with an i3-6100 to allow for solid gaming performance at 1080p. Graphics settings at 1080p will generally fall within the “medium” to “high” range, depending on the game.

Asus R9 380 Strix 2GB ($165): First up is one of the more important components in determining gaming performance: the GPU. In this case, we’ve chosen the ASUS R9 380 Strix 2GB due to its rock-steady performance at 1080p, low price, and decent power consumption. We first benchmarked the R9 380 with its more expensive brother, the R9 380X, but also benchmarked it more recently when testing one of Powercolor’s R9 380Xs. The R9 380 performs a bit below the 380X, and generally trades blows with the GTX 960 while oftentimes having a similar or lower price.

At 1080p, the R9 380 can play games at medium and high settings with relative ease while supporting mid-level power consumption, which can allow for lower capacity PSUs in order to save money. The ASUS R9 380 Strix uses the company’s dual-fan cooler and a default core clock of 990MHz. Currently, this R9 380 also has a $30 mail-in rebate for those interested in lowering its price down to $135.

Intel i3-6100 ($125): The next largest factor in gaming performance is the CPU. For this Cheap Bastard’s build, we’ve chosen the Intel i3-6100. The i3-6100 has a core clock of 3.7GHz and two cores with hyperthreading (explained in a recent Ask-GN Video), making for four total threads. The i3-6100 is based off Intel’s latest Skylake CPU architecture -- at least, short of going to BW-E -- and has a TDP of 65W. It also has Intel HD 530 integrated graphics for the IGP, but since a GPU is included, this is largely irrelevant except for troubleshooting and using Intel QuickSync for recording/streaming.

The i3-6100 also comes with a stock cooler, so an aftermarket CPU cooler isn’t needed.

Gigabyte GA-H110M-A ($46): Motherboards oftentimes just need to connect everything, fit, and work. In this build, the Gigabyte GA-H110M-A fits that bill well. Despite being based on the H110 chipset (which means it only has 2xDDR4 slots and some other limitations), the chipset will do well for this budget build. Its 2xDDR4 RAM slots support up to 32GB of RAM running at DDR4-2133 in dual-channel (but RAM can generally be overclocked easily past the “official” speed specifications).

The GA-H110M-A also features 1xPCIe x16 slot, 2xPCIe x1 slots (running at PCIe 2.0), and 4xSATA 3 ports for storage. It also has all the standard back-panel connections such as 3xUSB 2.0 ports, 2xUSB 3.0 ports, and 1xHDMI. The GA-H110M-A is an mATX motherboard, which allows for a smaller, more compact case.

Western Digital Caviar Blue 1TB 7200RPM ($50): For storage in our Cheap Bastard’s PC, we opted for a standard 1TB hard drive. This WD Caviar Blue 1TB drive runs at 7200RPM and provides enough storage for most people while also not taking up a sizable portion of this PC’s budget. It’s not as speedy as an SSD, but it will do fine for loading games/windows and storing standard media, like photos and videos. The WD Caviar Blue 1TB comes with a two-year warranty from Western Digital.

The EVGA 430W W1 is currently the same price on Amazon and Newegg (with Newegg having a $4 shipping fee), but Newegg also currently has a $10 rebate for those interested in saving $6 via Newegg (and a mail-in rebate).

The Rosewill SRM-01 comes with 1x80mm rear fan installed, but also supports a 1x120mm fan in the front -- we’d recommend installing one. Luckily, the case doesn’t have a windowed side panel, so the lack of color coordination (in favor of budget) with the other components won’t be painfully obvious.

For I/O, the SRM-01 has 2xUSB 2.0 ports along with audio in/out at the top and 1xUSB 3.0 on the right side of the case. The Rosewill SRM-01 is a basic case with decent features and a reserved style, maintaining a low price. Not bad.

Feel free to post a comment below for quick help or questions! For more in-depth, one-on-one support, feel free to check out our PC build forums.