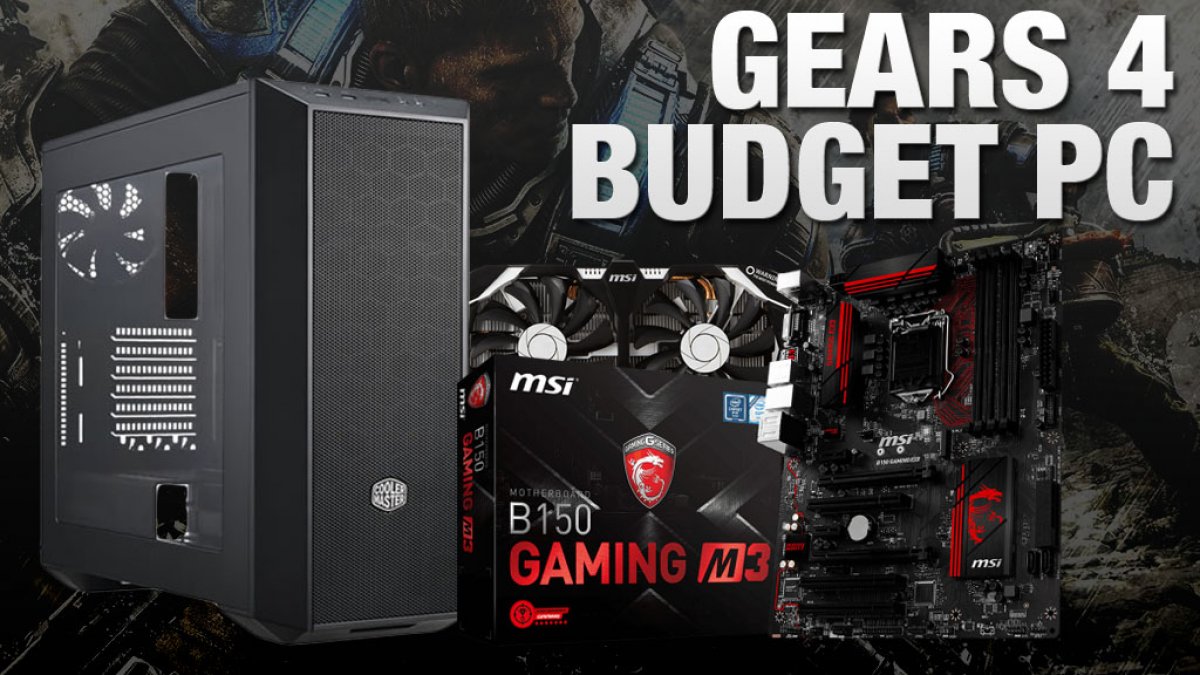 Gears of War 4, despite its woeful exclusivity to Windows Store, remains one of the best iterations of the franchise we've played – and the best on PC, of the two available on the most glorious platform. The game's overall aesthetic is cohesive and, for those first few levels, bright and punchy. As we dug deeper into the underground portion of Gears, we were met with more desaturated, foreboding tones that made Locusts visually pop. And, most importantly, it's a game with 40 graphics options, each accompanied with indicators as to expected performance. This, we think, is the saving grace to counter the game's Windows Store exclusivity.

That also makes it an excellent title for settings tweaking and tuning, though we found the presets to be generally performant across most GPUs currently out, even at High and Ultra. To play Gears of War 4 at 60FPS with High settings, we've assembled this list to build your own gaming PC around $700.

The above walk-through details the system building process, for any initiates out there. The process will be the same for almost any PC build, aside from custom loop cooling or similarly exotic builds. The article form of this walk-through can be found here.

MSI GTX 1060 3GB ($205): When we compared the GTX 1060 3GB and GTX 1060 6GB cards, we stated that the 3GB model falls into a weird price category of sort-of budget builds, and that we'd generally recommend either an RX 480 8GB or GTX 1060 6GB as an alternative. As a practice of attempting to place the 3GB card into a build that made good sense, we've chosen it here for its stand-out performance in Gears of War 4. As AMD (hopefully) stabilizes its frametimes in Gears of War 4, the RX 470 would also become a dependable choice for 1080p/ultra gaming – but its low framerate performance is variable right now, and >16ms swings in frametimes are frequent. 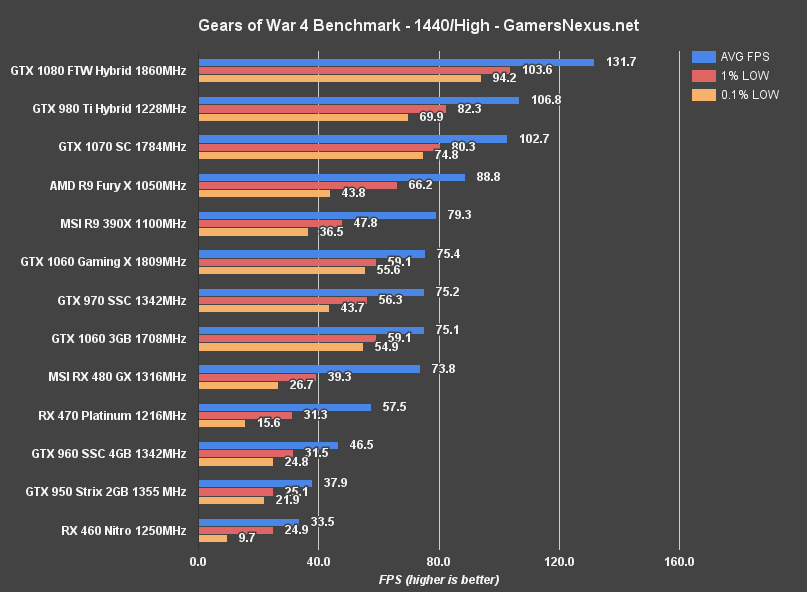 The GTX 1060 3GB manages a ~75FPS AVG output at 1440p with High settings, keeping its low performance near 60FPS. You'd sustain 60 almost constantly through GoW4 with the card, even with its 10% reduction in SMs over the 6GB model, and that's at 1440p/High. 1080/High is supported at 115FPS AVG, allowing room to tweak some settings to Ultra. Watch out for VRAM intensive texture settings, though.

Read more in our GOW4 benchmark.

Intel i5-6400 ($182): Our next PC build will make use of budget-friendly, sub-$100 AMD Athlon X4 CPUs, setting forth to prove the viability of a low-end system for modern 1080p gaming. Today, we're leveraging an Intel i5-6400 for mid-range gaming performance without any focus on overclocking or tuning. The 6400 is a non-K SKU, which means two critical, immediate factors come into play: (1) it includes a stock cooler which, although not the best, will save us some money for the build on day one; (2) non-K SKU CPUs cannot overclock.

Not every build needs to be OC-ready. If you already know that you're not planning to play around with overclocking, this CPU will reduce total investment significantly over the 6600K. If money is short, stick with the stock cooler for a little bit – it'll be fine with the case we've chosen – and maybe replace it within a year or so. See below for a recommendation. That'll reduce noise levels and allow for some preventative maintenance (dust removal) at time of replacement, so it's a win all around.

SilverStone Argon AR01 ($35): The Argon AR01 will clear the MasterBox 5's 167mm CPU cooler maximum height, and remains one of the best budget air coolers we've tested. This would be a good choice for K-SKU CPUs and most beginner to intermediate overclocks, but can also find a home on the i5-6400 for reduced noise levels. We generally recommend replacing the stock coolers within a year or two of life anyway, if not performing routine preventative maintenance, as they'll collect dust more easily than coolers with a better fin design.

MSI B150 Gaming M3 Motherboard ($110): The B150 chipset fits non-K CPUs well. A Z-series chipset is primarily useful for its abilities to support unlocked overclocking, which doesn't apply to us, or other features that won't benefit this build. MSI's B150 Gaming M3 is in the same family of boards as the B150A LED board we reviewed recently. The board supports DDR4 up to 2133MHz, fitting our kit well (will downclock memory if necessary), hosts a SATA-mode M.2 SSD slot, and the usual assortment of SATA III I/O. As a platform for our CPU & GPU, the B150 M3 offers high quality (for its middle-of-the-road chipset) build and power design.

G. Skill Ripjaws V 8GB DDR4-2133 ($46): Maxing-out the native support on the motherboard for memory, G. Skill's budget-friendly Ripjaws V RAM operates at 2133MHz with 2x4GB sticks. The memory fits the red/black aesthetic we've created – because RAM is so commoditized now – and won't choke gaming performance in the system. If you're eying 16GB kits as an upgrade, we'd advise against that for most users; it'd make more sense to invest that money elsewhere, like a better CPU, a CPU cooler, or maybe an SSD. Only in very specific use cases will an extra 8GB be useful on a daily basis, and folks with those use cases likely already know who they are.

Rosewill Valens 500W ($55): Rosewill's 500W PSU gives us a no-frills, efficient source of power for an already low-power system. The Valens is an 80 Plus Gold rated PSU with non-modular cables, a small (but still ATX) form factor to fit in (basically) every mid-tower ATX case, and doesn't provide a superfluous amount of power. Read our “How Many Watts Do You Really Need?” article to learn more about going overkill on a power supply, which is probably the most common occurrence with beginner-intermediate builds.

WD Blue 1TB 7200RPM HDD ($50): We're foregoing an SSD in favor of cost, this time, opting for a higher GB/$ ratio that'll benefit our budget needs. An SSD will speed-up boot times considerably and help with the aging process as Windows inevitably gains some bloat, but isn't flat-out required in a budget build. For $50, we end up with a 7200RPM WD Blue HDD that's got 1TB of starter storage. Depending on your priorities (noise, CPU temperature, CPU power), an SSD would be a fine optional add. Generally, we'd recommend starting with one if planning to get one at all, or minimally reinstalling Windows clean once you've picked an SSD up. It isn't worth trying to migrate.

Plextor M7V 256GB ($70): For an optional SSD, consider a budget-friendly M7V 2.5” SSD at $70 for 256GB. Plextor has its roots in storage media and works closely with enterprise customers, but has recently launched a new lineup of consumer solid-state drives using the Marvell 88SS1074B1 controller and TLC NAND. If you're unaware of NAND Types and what they mean, we recently published an animation + article explaining NAND and how it works.

Cooler MasterBox 5 ($62): Cooler Master's MasterBox 5 is a stout mid-tower box. It measures in a bit wide, but medium in height, with dimensions of 18.70" x 8.66" x 19.69". The MasterBox's big gimmick is its modularity – but that actually proves useful, in this case. We immediately shed some weight with a lack of stock optical drive cages (also helping cost), with pre-installed fans more than adequately cooling the rest of the build. The case includes 1x120mm rear exhaust fan and 1x120mm front intake fan, with room for radiators, should liquid cooling become interesting.