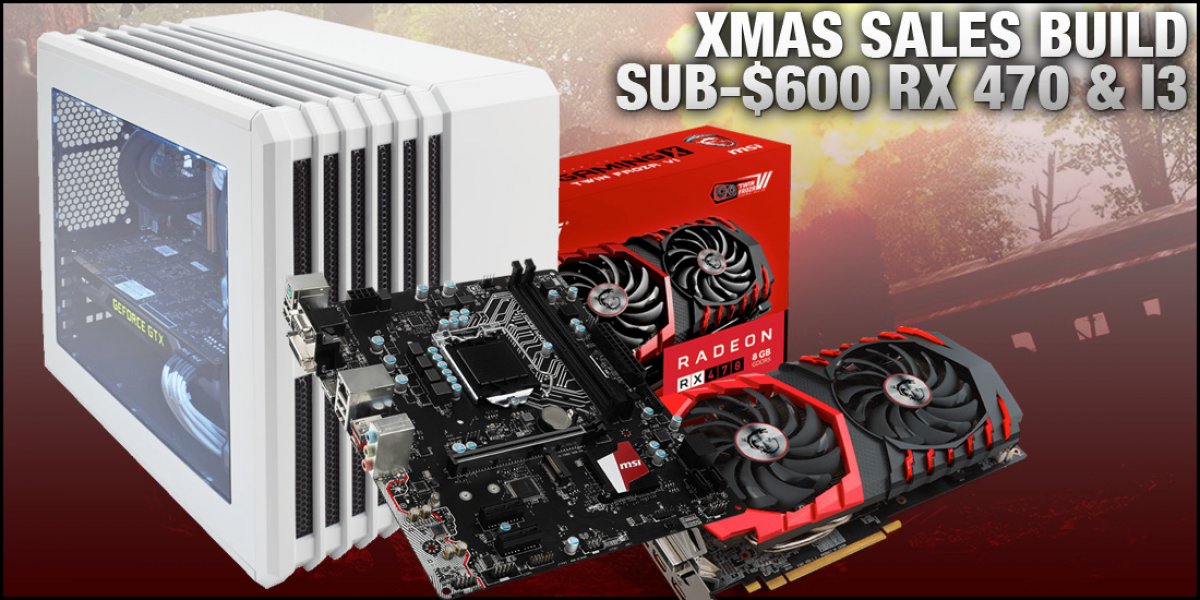 The holiday season is upon us. In due time, the Steam Holiday/Winter sale will be flowing like a river, and many users will be preparing their wallets for the impending profligacy. As Newegg, Amazon, and other retailers usually offer sales of their own, other users may be eyeing core component upgrades or new systems entirely. That said, we’ve attempted to take some of the legwork out of putting together a mid-level gaming machine that is comprised mostly of hardware currently on sale, or discounted through current rebates. Admittedly, that narrows options; however, we’ve still come up with very capable and modern build without becoming lusus naturae.

This rig will be a sub-$700 system focused on gaming at the respectable, and still most popular, 1080p. If by chance you are needing more horsepower for, say, the 1440p domain, check out another recent build guide of ours. As an aside, we’ve selected mATX hardware housed in an mATX chassis; something that will please space mindful users wanting a build with a minimal footprint. Before getting into it, I’ll preface with this: more ardent enthusiasts might balk at the presence of a core i3, specifically the i3-6100, but keep in mind that this is a value-oriented build, and the i3-6100 fills the space well. We’ll discuss this a bit more below.

Per the usual format, we will list an OS in the below DIY build list as an optional purchase in addition to an optional, but advised, SSD. Also below, find our tutorial on building a gaming PC or check out our more in depth article.

This gaming PC build is priced below $700 (though may be below $600, if the sales are still active), and is targeted at high graphics settings with a 1080p monitor.

MSI RX 470 Gaming X 4GB ($160): The MSI Radeon RX 470 Gaming X 4GB card can currently be had for roughly $160, including a free game, making this an attractive Christmas deal. The RX 470 is based on AMD and GloFo’s new 14nm FinFET Polaris architecture that brings better performance per watt efficiency, full support of modern APIs such as DX 12 and Vulkan, Async Compute advancements, and the new AMD Wattman bundled software suite. The MSI RX 470 Gaming X runs a maximum boost clock of 1254 MHz on the core and a 6700 MHz memory frequency. Noteworthy as well is the custom PCB and 4+2 phase power design which, in theory, can allow for marginally better power handling for overclocking. Additionally, the revised Twin Frozr VI cooler has been well received, and will see noise levels and thermals significantly improved over reference design. The lack of a backplate is worth mentioning, but this is really only noteworthy for aesthetics in a card like this.

Intel i3-6100 3.7GHz ($110): The i3-6100 is not currently on sale or discounted, but it does offer a very real performance per dollar ratio; an increasingly important metric as the build budget shrinks. Our i3 is of 2C/4T and is without Turbo Boost, operating at a flat frequency under load. As previously mentioned, some will no doubt assert that the i3-6100 will cripple performance, but the impact isn’t big enough to justify a price jump. Embattling the i3-6100 with its i3-6300 counterpart, the price disparity between $110 and $150 is hard to justify for a ~$600 system. The cache deficit is largely a non-issue for gaming purposes. For production workloads requiring the local cache, it would be a hindrance – but this is not a workstation or production system. The i3-6100 working in tandem with a mid-range GPU is more than capable of providing enough horsepower for fluid, 60+ FPS graphics at 1080p/high without being a bottleneck. Being a value-conscious, entry- to mid-level gaming system, the i3-6100 will pay performance dividends resolutely.

Cryorig C7 ($27): Normally when building a PC under a budget, we might advise forgoing the purchase of a CPU cooler upgrade to save money upfront on build day and then upgrade within a 6-month or 1-year timeframe. However, the presence of a few worthy coolers on sale warrants serious consideration. As such, we’ve listed the Cryorig C7 mini CPU heatsink as a suitable replacement to the Intel stock cooler. The Cryorig C7 uses a copper coldplate and heat pipe arrangement, helping in affording the 100W TDP cooling capacity that’ll cover our i3. The C7 has a total height of 47mm, fitting well within our chassis clearance for CPU coolers. The C7 will also reduce noise levels considerably.

MSI B150M Grenade mATX ($66): The B150 chipset isn’t quite as “upper mainstream” as the Z/H170 series, but it affords budget gamers a platform with modern hardware support like DDR4 memory and Intel’s 14nm Skylake processors. The bulk of savings comes from B150 boards relinquishing overclocking support, allowing users to skip the price premiums of “K” SKU processors. The MSI B150M Grenade board is aimed at offering dedicated performance features typically reserved for more sumptuous boards. Such include USB 3.1 (Type-A and C), PCIe x4 M.2 (which MSI calls “Turbo”), upgraded onboard audio, debug LEDs for troubleshooting, and reinforced PCIe slots. That latter is a trend we’ve seen in other MSI boards and is a purported solution to GPU sag.

EVGA BQ 500W ($45): Available for roughly $45 after rebate, the EVGA BQ Series 500W model is a good value power source. The BQ series is EVGA’s answer to Corsair’s CX Series of PSUs. The 500W is a recent adding to the well-received BQ lineup. Similarly, it offers 80 Plus Bronze efficiency, a sealed bearing (as opposed to a sleeve bearing) avowing lower noise levels, and a semi-modular cable design—something that will better facilitate cable management in our mATX case. The EVGA BQ 500W comes with a three-year warranty and a MTBF rating of 100,000 hours, translating into several years of use barring any catastrophes.

WD Blue 1TB 7200 RPM ($50): While not currently on sale, the Western Digital Blue 1TB is earmarked for budget-minded builders. Having several of them deployed in our current production systems, they come easily advised over the WD Black series, within which there is little difference.

Samsung 850 EVO 250GB ($90): Perhaps the gold standard in the consumer/enthusiast segment, we are listing the Samsung 850 EVO (which is currently on sale), as an elective upgrade. The Samsung SSD uses TLC V-NAND with a Samsung MGX controller. As such, it is capable of higher endurance and more P/E cycles than traditional TLC implementations, contributing to the 5-year warranty. At this point, read/write speeds are typical of what can be expected from a SATA III connection, an interface that is slowly becoming archaic and being superseded by NVMe or PCI-e storage. The Samsung 850 EVO will serve well as host for the OS, seeing greatly reduced boot times over mechanical drives. Likewise, the Samsung 850 EVO would also fare well has an option for auxiliary storage or game library storage, facilitating lower loading times and speedier file transfers or storage tasks.

Corsair Carbide Air 240 MicroATX ($75): The chassis of choice is the Corsair Carbide Air 240, also on sale at the time of this writing. The Corsair Carbide Air 240 is an mATX version of the Air 540, suitable for mITX builds as well. The Air 240 comes equipped with 2x 120mm fans, 3x 3.5” HDD bays, 3x 2.5” SSD bays, a removable dust filter, and the usual connectivity options adorned to the front panel. Radiator support is at the front panel (240mm) or the bottom (240mm) if using an mITX motherboard. When constructing a small form-factor build, it is ever more important to pay heed to the clearances offered by the chassis. Our CPU cooler, GPU, and PSU selections are all in accordance with said clearances.

Leave comments below for assistance with this PC build. Our forums are also open for more in-depth discussion.