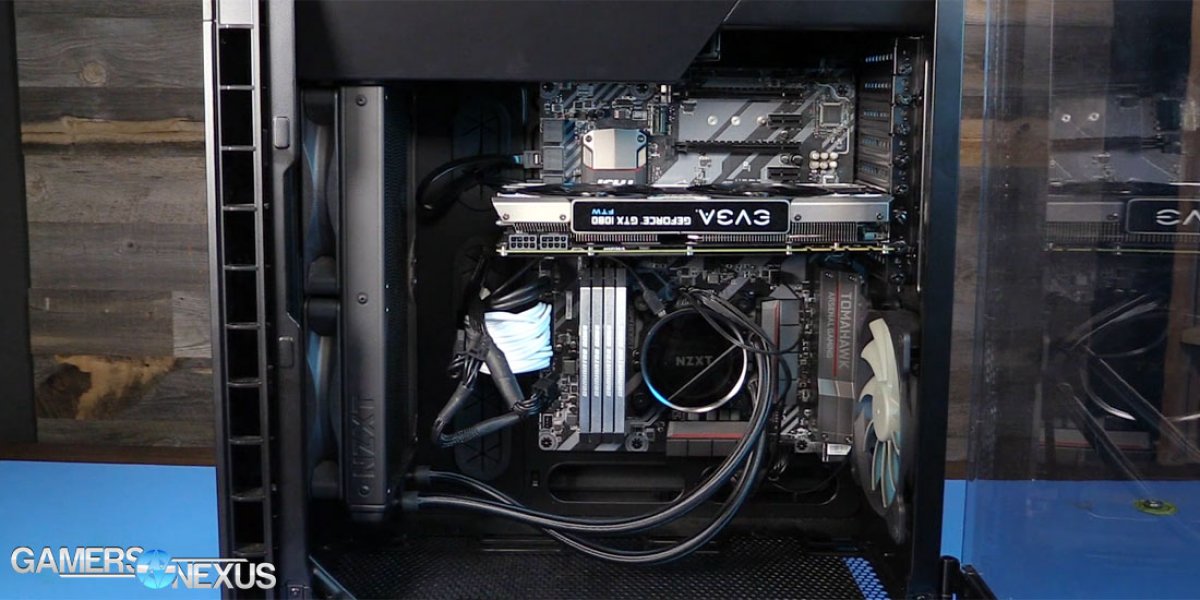 With the arrival of Kaby Lake on the microarchitecture roadmap, Intel had effectively signaled the end of their long-established “tick-tock” cadence of manufacturing and design, opting instead for the new “process-architecture-optimize” paradigm. Specifically, the “optimization” step comes by way of a revised fin profile as part of the new process that Intel has dubbed “14nm+.” While the architecture remains largely unchanged from Skylake, the improved fin profile and larger fin pitch affords a less transistor-dense design, making way for MHz headroom in overclocking performance, which can be ascertained by looking at our review of the i7-7700K. Furthermore, readers can learn more about the Kaby Lake architecture, SKUs, and the Intel 200-series chipsets amongst the usual thermal and benchmark performance. To an extent, Kaby Lake can be viewed as the Devil’s Canyon counterpart to Skylake.

The scope of our build today will be dual purpose, so to speak. In its duality, the foremost objective will be leveraging the new Intel i7-7700K in combination with a GeForce GTX 1080, underpinning our second objective: 144Hz & 120Hz based gaming. The build will be ready for resolutions at 1080p or 1440p with higher refresh rates (144 & 120), and will still manage a minimum of 60 FPS with ultra settings. Lowering settings will allow for that 120-144Hz refresh target.

We will also deploy one of the new Z270 motherboards, complimenting the overclocking aptness of the i7-7700K. Speaking of overclocking, the i7-7700K approaches the 5GHz barrier with relative ease. We’ll be relying on a CLC cooling solution with 280mm of radiator space. While it may prove conceivable to approach a 5GHz overclock with active air cooling thanks to a better frequency/voltage curve with Kaby Lake, there are a couple reasons we won’t go that route, detailed below.

Additionally, we will list a 144Hz, G-Sync-capable display as an optional purchase. Find our tutorial on building a gaming PC below, if this is all new. In an interesting deviation from our normal methodology, the team at GamersNexus will be replicating this build and running it through the benchmark gauntlet.

Editor's note: The point was to use only products that we had in our inventory, meaning no purchases or product requests allowed.

How to Build a Gaming PC 2017 Tutorial

EVGA GTX 1080 FTW ($590): EVGA is no stranger to the enthusiast segment, often being synonymous with high-end builds. In this build we will utilize the EVGA GeForce GTX 1080 FTW to realize our 144Hz gaming overture specified above. The thermal issues that have troubled some of the EVGA GTX 1080 FTW cards have been resolved by means of a VBIOS update and thermal pads--both of which will be included in newer cards. We did our own thermal testing and analysis of the EVGA GTX 1080 FTW, both before and after the resolutions offered by EVGA.

Digging into the specs of our 1080, the EVGA GTX 1080 FTW features the GP104 chip based on nVidia’s 16nm FinFET Pascal architecture; that’s likely nothing new to the GN audience at his point. Additionally, our card runs 8GB of GDDR5X memory clocked at 10Ghz effective. The core runs a 1721Mhz base clock and 1860MHz boost. The EVGA GTX 1080 FTW sports a max refresh rate of 240Hz, which is well within the range we’re building for.

Here’s a look at some results when running 1440p resolutions with High and Ultra settings: 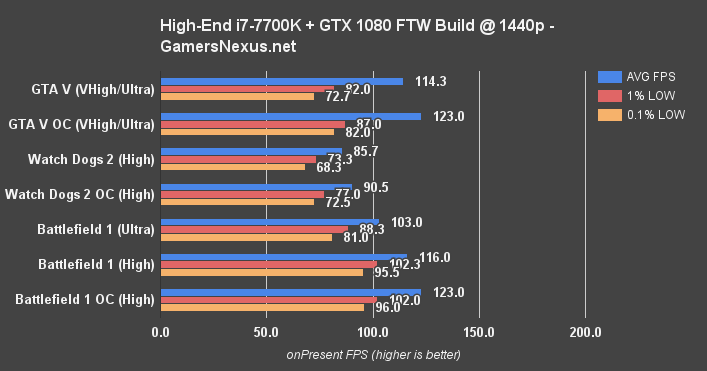 Not quite there -- we can hit 120Hz in some instances. 144Hz would be possible with the likes of Rocket League, CSGO, and similarly low-fi eSports titles. Major AAA endeavors need a drop to 1080p. Dropping to 1080p would more or less guarantee 144Hz refresh targets (even with High/Ultra settings), for competitive players in need of the highest refresh gameplay. If you’d rather have the higher resolution 120Hz framerates aren’t out of reach with fine tuning of game graphics.

EVGA employs the third generation of its ACX custom cooling design which includes a nickel-plated heat sink, six heat pipes, and a pair of 100mm fans. The EVGA GTX 1080 FTW operates >200W via a pair of 8-pin PCIe power connectors, and uses a 5+2 power phase design (often counted as 10 due to the doublers). Noteworthy as well is the way EVGA handles the 3-year warranty -- disassembling the card will not void the warranty, making it an exemplary choice for water cooling aficionados.

Intel i7-7700K ($350): Perhaps the most enticing reason to invest in Intel’s 7th generation CPU is the overclockability afforded by Kaby Lake. Intel offers its high-end SKUs as unlocked, and that hasn’t changed with the 7th gen line-up. The i7-7700K sits at the top of the stack, with 4C/8T, its out of the box frequency is at 4.2GHz with a turbo boost frequency of 4.5GHz. If our samples (which hit 5.1 GHz), as well as other samples in the wild, are any indication, users can expect a 300 to 600 MHz overclock to be typical. While raw gaming performance doesn’t see a meaningful improvement, production workloads see nice performance gains. Notable changes Kaby Lake brings are support for Intel technologies XPoint and Optane, improved integrated graphics, and SpeedShift v2. While Skylake owners are unlikely to upgrade—and they really shouldn’t--Kaby Lake makes sense if on a CPU a couple generations behind.

NZXT Kraken X62 ($160) : Thanks to a better frequency/voltage curve and increased power efficiency, sustaining a heavy overclock on the i7-7700K with air cooling could be possible – but we’ve had pretty rough thermal results on both of our CPU samples. On average, we’re seeing a temperature increase of ~6~7C over Skylake if assuming equal voltage and cooling configurations. High-end air coolers can be just as capable of maintaining temperatures as liquid, though with the caveat of extra space required and heavy blocks mounted to the board (particularly with Kaby Lake, which does have thermal issues). Liquid cooling can also bring a CPU back down from its peak temperature much quicker than air. When cooling an overclocked CPU in a daily system, the peak-to-idle temperature time can go a long way in preserving working life.

Using even the X62 280mm cooler with a 75% fan speed and 100% pump speed (front-mounted push), temperatures are tough to maintain with our torture workload (Prime95 LFFTs + FurMark simultaneously):

You’d want to manually lower voltage as much as possible (Kaby Lake boards are a bit overzealous on vCore, so far). The above is an absolute worst case scenario, though. Gaming won’t push the cores that hot – but you’ll still want the 100% fan speeds for long production workloads or overnight processing.

Further complicated by the potential crux of inefficient heat transfer between the CPU die and IHS on the i7-7700K, we feel that a CLC with abundant radiator surface area is the best cooling mechanism for this build. We will deploy the NZXT Kraken X62 for this one, which we both reviewed and tore down. Ultimately, we found the new NZXT Kraken series offer the best noise to performance ratio and their cooling efficacy is better than the previous generation. The custom PCB inside the pump block allows for independent control of lighting, pump speed, and fan speed through CAM, NZXT’s monitoring software.

MSI Z270 Gaming Pro Carbon ($175): With Intel’s newest silicon also comes their latest chipset: the 200-series chipsets. In this build we’ll be using Z270 which, like the Z170 chipset, caters to enthusiast builders and overclockers. While it is not necessary for users on a H170 or Z170 platform to upgrade to a 200-series motherboard for Kaby Lake support, the 200-series chipsets offer support for Intel Optane, 30 HSIO lanes (vs. 26 on the Z170 chipset), and a higher end for DDR4 frequencies. The MSI Z270 Gaming Pro Carbon is one of the boards included in the testing and benchmarking of our i7-7700K sample, and we found it to be a better platform at the time. The MSI Z270 Gaming Pro Carbon is a standard ATX board using an 11-phase VRM and is comprised of features such as 3x PCIe 3.0 x16 capable slots, 2x PCIe x4 M.2 slots, 1x USB 3.1 Type-C with Gen.2 support, 1x USB 3.1 Gen1, and support for 64GB of DDR4 3800MHz. Moreover, the board uses steel reinforcing around PCIe slots, as well as the DIMM slots. Also included is MSI’s new M.2 shield, which is both a heatsink and decorative cover for any installed M.2 drive.

Corsair RMx 850 ($100): The Corsair RMx series isn’t unlike the higher end RMi series. The RMx series relinquishes Corsair Link monitoring support, and substitutes a cheaper fan in the form of a rifle bearing alternative. Keeping the RMx series closer to top tier, however, is a fully modular cable design and the usual OCP/OVP/SCP options. The Corsair RMx series uses all-Japanese capacitors on both the primary and secondary side, is 80 Plus Gold rated, has excellent ripple suppression, features all heavy-duty protections, and comes with a 7-year warranty from Corsair. We’ve elected to go with an 850W capacity to amply provide for a multi-GPU array and accommodate added power draw for overclocks.

Seagate BarraCuda 2TB ($70): To diverge from the earmarked WD Blue that we’ve frequently recommended, we will go with the Seagate BarraCuda for 2 TB of mass storage. At this point, there is little to behold of mechanical drives, although they’re still viable as cost effective auxiliary storage. The Seagate Barracuda uses the SATA III interface, contains a 64MB cache buffer and spins at 7200 RPMs. GN recently used a 4TB variant in a last minute Christmas build.

Samsung 850 Evo 250GB ($98): The Samsung 850 Evo again finds itself in another build guide. The drive works well as a host for the OS or a media library for games, music, video, etc., or a combination of both. The MGX controller is designed for client PC usage, and the throughput speeds are on the upper end of what can be expected from the SATA III interface. The 850 Evo’s random access speeds, which contribute to overall responsiveness, are consistent and rival the top end 850 Pro. The TLC V-NAND touts a high endurance rating of 75 TBW (TB written) with a 5-year warranty.

Corsair 600C Inverse ATX Full Tower ($130): The Corsair 600C is the chassis we will use to house our Kaby Lake build. The layout is the most prominent feature of the 600C, as it inverts the motherboard to allow for unobstructed airflow across the CPU and GPU. Additionally, a top mounted PSU shroud is employed for both cable occlusion and to use the PSU as an exhaust of sorts, drafting air up and out of the case. Overall, the cooling design is effectual, as can be read in our Corsair 600C review. 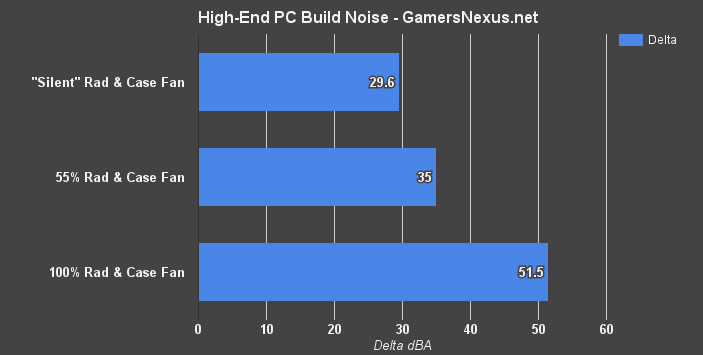 That’s it for this guide. Tweet at us or post in the comments below for quick help.