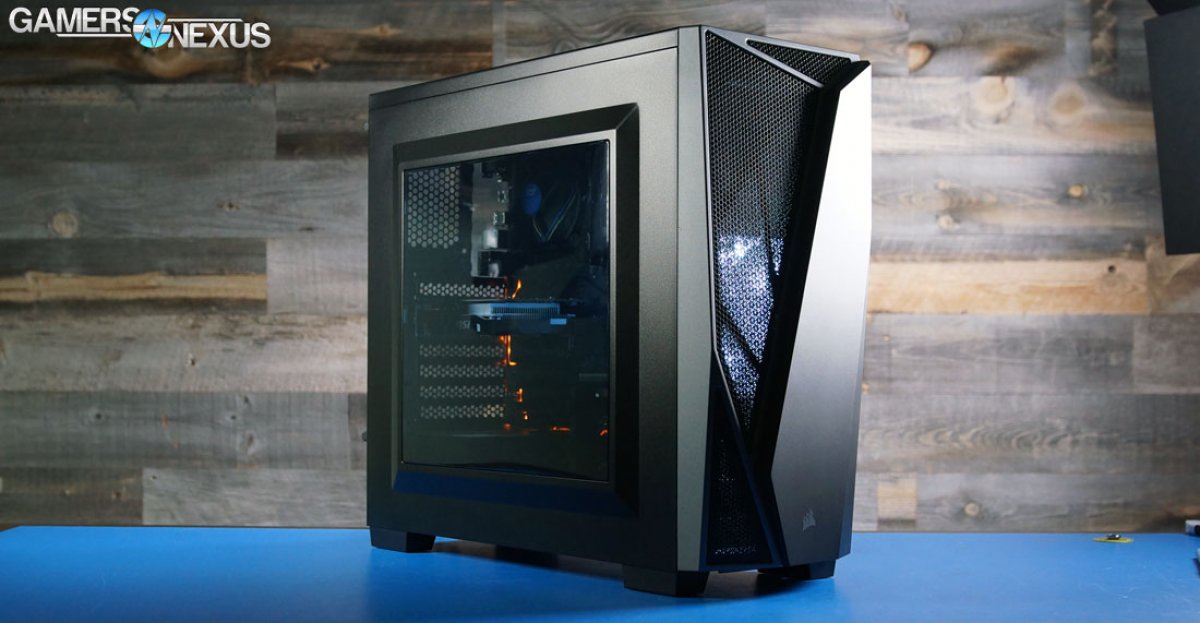 Intel’s Kaby Lake launched to a sweeping shrug of insouciance amongst enthusiasts, as the upper-end Core Series parts—aside from the manifest overclocking headroom—failed to provide any prominent impact. While the i3-7350K attracted the gaze of frugal-minded overclockers for being the first unlocked i3, it is simply priced too close to the neighboring Core i5 CPUs. Yet, Kaby Lake may still hold a gift for budget builders: the Pentium G4560, arguably the most interesting aspect of Kaby Lake.

The Pentium G4560, alongside its G4600 ($87) and G4620 brethren, received a boon in the form of boosted core clocks and enabled Hyper-Threading. This marks the first time Intel has released a Hyper-Threaded Pentium since the Pentium 4. The G4560 is of particular interest for a being a 2C/4T processor at ~$70, making it roughly half the price of both the i3-7100 and 6100 (see here). The G4560 can’t cannibalize the i3 line entirely, as cost cuts come by way of a hamstrung iGPU (HD Graphics 610 vs. 630) and stripped AVX instruction support; now, the former is largely a non-issue for our audience, as even pennywise builders usually opt for a discrete GPU. The latter can prove a hitch for strenuous workloads; i.e., certain types of encoding, video capture, and blender rendering. Still, we—and likely any of our readers interested in a processor like this—are far more interested in raw gaming potential at the cost.

There are clear limits as to the kind of video card the G4560 can push before becoming a bottleneck, so ascending to the top of the GPU performance ladder isn’t an option here; users will need to limit themselves to an appropriately classed card. Still, the ultra-low price offers atonement of sorts. Perhaps unable to rival the eminency of the venerable G3258 for upper-bound clock rates, the G4560 can theoretically encroach upon guarded Core i3 territory for games requiring 4 threads, warranting the gaze of thrifty gamers looking to break into the PC gaming scene.

This budget gaming PC build features Intel’s Pentium G4560 and costs less than $500, while still capable of 60FPS gaming at 1080p. As is customary, we’ll list optional upgrades below. For the uninitiated, find our PC building tutorial below as well, as this build is a good jumping off point for first time builders.

There are a few changes we’ll suggest in the content, as you could save some more money where we couldn’t – we’re using only parts that we have in-house and have experience with, which imposes some limitations.

MSI GTX 1050 OC ($100): On a high-end machine with no budget ceiling, it’s easy to slap in an unlocked i7 part and a 1080 Ti without paying much heed to the pipeline between the two—budget machines necessitate a more delicate balance of power and parity. Even with low overhead APIs, a dual core chip (even one with four threads) can’t keep an overpowered GPU data-fed. We’re using a GTX 1050 here for its price:performance compromise.

Yes, there are other options. The RX 460, 470—and their new 500 series counterparts—and 1050 Ti are all appropriately classed contenders. The RX 460 and 470 have been supplanted by the Polaris refresh, and those cards are either out of stock, approaching $200, or of limited availability. Depending on game, we also found the 1050 to be a better price:performance than the RX 560 in the right scenarios, though you’d want the RX 560 instead if playing games like DOOM and Sniper Elite (where software optimization favors AMD).

The goal for gaming performance in such an inexpensive PC was roughly 60FPS at medium to high settings. Starting at the low end of the spectrum, Sniper Elite 4 on high ran at 44.7 FPS average, despite excellent optimization. This is a game that relies heavily on the GPU, as demonstrated in our G4560 bottlenecking article, where the 1050Ti installed in a similar system scored a good 10 FPS higher. There was no stuttering, though, and medium settings raised the average near enough to our 60FPS goal. As stated, this particular title would go better with an RX 560, as would DOOM.

The more demanding Ghost Recon: Wildlands benchmark at medium settings remained below 50 FPS, while GTA (at our usual very high/ultra settings) had a higher average, but comparable 1% and .1% lows. Nearing 60FPS with effectively maxed settings in GTA V is an impressive feat for the G4560 + GTX 1050. Total War: Warhammer fared better, again nearly at a 60FPS average. Overwatch at the maximum possible settings performed roughly the same, but consistently high framerates are much more important in competitive gaming. By following our Overwatch optimization guide, we raised the average to 87 FPS and the .1% low to a much more manageable 51 FPS.

Looking at our recent review, the G4560 performs akin to the once gaming champion i5-2500K. Moreover, the performance gap between bordering i3s is very narrow, unapologetically taking some of the shine off the i3 price tags.

Pentium G4560 3.5GHz ($70): CPU innovation has somewhat stagnated lately, due to lack of competition along with manufacturing processes approaching the limits of physics. While the high-end Kaby Lake chips are fun for tuners, they don’t offer much to talk about being a rewarmed Skylake. Intel’s refreshed Pentium family is more exciting.

As previously stated, the Pentium G4560 is a dual-core CPU with Hyper-Threading, offering a flat 3.5 GHz frequency under load—no turbo boost. Additionally, Intel omitted AVX/AVX 2 instruction support, both as a cost cutting and sales saving measure. While the distinctions from the i3 line don’t stop there, these are the most decisive. The omissions are unlikely to have an adverse impact on a low-cost gaming machine at 1080p. Some games benefit from higher clocks, while others might scale better with cores/threads, offering a benefit from parallelization. Still, the common trend is most modern games become GPU bound before a CPU bottleneck manifests.

While a dual-core CPU with Hyper-Threading isn’t going to match the muscle of a quad-core CPU every time, it opens the door for better performance from games expecting 4 threads. The Pentium G4560 paired with a sub-$200 GPU will provide enough horsepower for a more potent gaming experience over a console. A stronger Pentium family might very well be Intel’s preemptive salvo on AMD’s anticipated low-end Ryzen opposition.

Thermaltake Contac Silent 12 ($25): To save costs upfront on build day, it isn’t necessary to invest in an aftermarket cooling solution for this build, especially considering the power efficiency and thermal envelope of the G4560. That isn’t to say it is a bad investment; rather, spending $25 to preserve the working life of a chip and reduce cooling audibleness over an intel stock cooler is never a bad investment.

GN’s Patrick deployed the Thermaltake Contac Silent 12 cooler in his recent R5 1600X build guide, and found the performance to be satisfactory. If the Contac Silent 12 can manage the heat of the R5 1600X, users can be assured it is more than capable of handling the 54W TDP of the Pentium G4560.

Gigabyte GA-B250-HD3 ($95): There is little reason to pair a Pentium with a Z270 board; we can save money by going with one of Intel’s more minimalist chipsets, like H270 or B250. Builders could always buy a more premium board with the intent to upgrade the processor later, like a Z-series motherboard for later occupancy by a K-SKU upgrade, but that’s not a common approach.

For this Pentium build, we’ve chosen a B250-based board from Gigabyte that we had in the lab. Although the Qxxx and Bxxx chipsets are technically business oriented, that doesn’t stop motherboard vendors from saddling them with “gaming” branding. That said, gamers looking for a no-frills, inexpensive gaming board could do well with the B250 chipset. The B250 chipset has more HSIO and PCIe lanes, in addition to support for Intel’s Optane technology, when compared against the last-gen B150. For single-GPU gamers not looking to overclock and wanting at least one M.2 device plus basic I/O and connectivity options, B250 is well suited.

As alternatives, cheaper motherboards could shave $20 off the price of this build. We did not have them here for testing, so did not use them, but consider looking into the ASRock Pro4 or Gigabyte MATX DS3H.

Kingston HyperX Fury 2400MHz 8GB ($68): Unfortunately, with current DRAM prices such as they are, it isn’t an ideal time to be piecing together a new system. We did find an 8GB kit for ~$70 – not a great price, but not as excessive as some higher capacity and clock kits. There’s nothing especially noteworthy about this kit: it’s a solid set of sticks from Kingston, and one we’ve had in the lab before. They run at 2400MHz, which is the top end of what our motherboard and CPU support, and they’re in a 4x2 GB configuration for dual-channel operation.

EVGA 500 B1 ($40): This is a low-power system that could easily run on a 400-450W PSU (check our article on PSUs and gaming PCs). But we’ve got a 500W EVGA unit we like, and it regularly goes for $20-40. The price of most 400W-450W PSUs doesn’t make a whole lot of sense right now, as the market is still figuring out the tradeoff between pragmatism and marketing speak. Granted, at that price, OEMs (HEC for this unit) cull the sumptuousness—compromises for this unit come in the form of a sleeve bearing fan, no special capacitors to speak of, and fixed cables. Still, it’s a solid entry-level, 80 Plus Bronze PSU with a few heavy-duty protections and a 3-year warranty. Realistically, this should offer a service life well beyond the life of this build.

Here’s a look at our power consumption during different workloads:

WD Blue 1TB 7200RPM ($50): For archival storage, we’ll go with the unanimous budget favorite WD Blue. For more details on WD Blues and other WD drives, consult our updated article on the subject. In recent years, we’ve taken to recommending a decent SSD over a cheap HDD, while making plans to purchase mass storage down the road. Escalating SSD prices give pause when making suggestions for a budget gaming rig. Still, for those with the budget, the Corsair MP500 M.2 will make for a snappy boot drive, and it can be had for less than $100. We’d just recommend investment elsewhere first – like the CPU and GPU.

Corsair Spec-04 ($50): Cases in the $50 range usually offer enough functionality for economy builds—the Spec-04 from Corsair is one such offering. This chassis is something of an amalgamation of the Spec-ALPHA and Spec-01, as discussed in our review of the SPEC-04. It follows suit with some of Corsair’s recent asymmetrical designs while maintaining the budget premise of the Spec-01. The cooling layout offers 5 spaces ready to equip with fans: 2x front (120/140mm), 2x top (120mm), and 1x rear (120mm). Finally, 3x 3.5” HDD bays, 2x 2.5” SSD bays, and dust filters for both the front panel and PSU round out the options. Not exactly robust, but it’ll get the job done for a $500 Pentium build.

Here’s a look at our thermal readings:

This was tested with a 26dBA noise floor at 20” away. If you were to run the case fan at auto RPMs, noise output would be lower; we tested with the max case fan RPM, as the stock CPU cooler doesn’t do us any favors.

More of these to come, as always.