You swear. You make up the most outrageous, histrionic combinations of words followed by an authoritative slam of the enter key - *whhhack!* Grief or be griefed, there is no try. Objective: annoy those around you. Optional objective: remain sane.  Given time, this persona transcends the Internet and wades into your daily life – slowly at first, but that’s just the beginning. 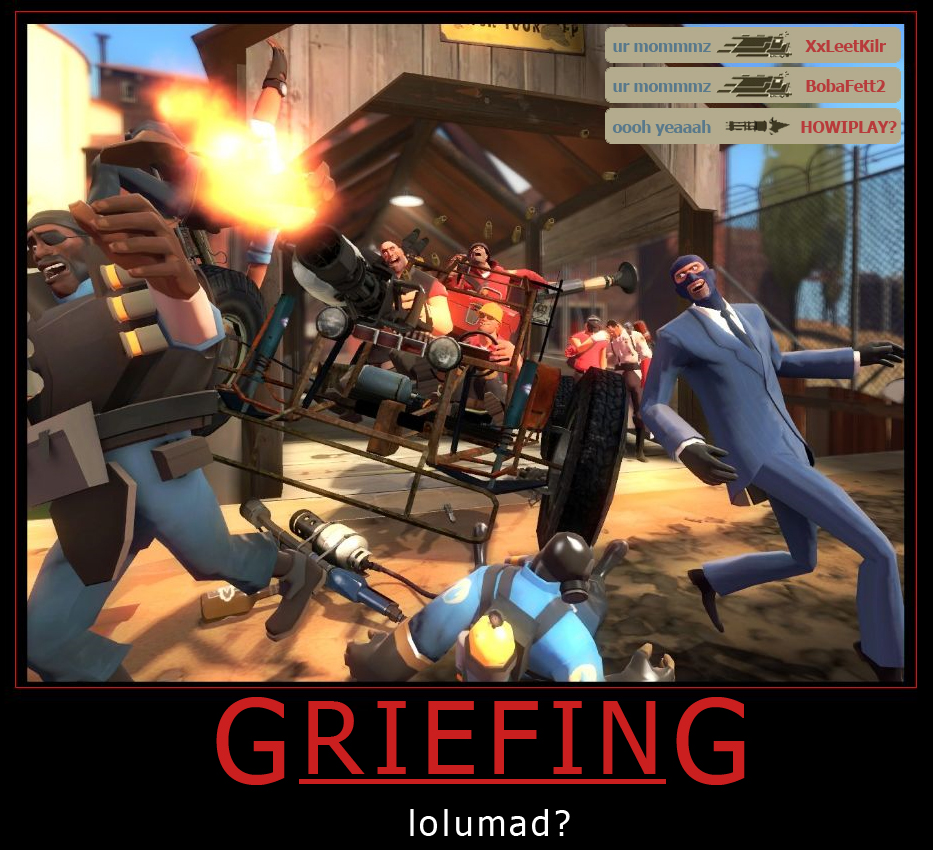 When seated atop your hallowed throne, pwning absolutely every poor bastard that wanders into your sights seems trivial. You are the right-hand of destruction – the digital God passing judgment on to all of those unworthy… yet everyone damns your name. Have you ever stopped to wonder why profanity is so inveterate a habit among gamers? In order to answer this question, we must delve deeper into the black abyss that we call “Online Gaming.”

We all know that ‘gamers’ have their own set of rules, codes of conduct, culture, and language – mainly 1337 5p34|<, or 133t speek, or however you spell it. Heck, we've even proven self-awareness by building full-on gaming rigs for under $500, but under which category does the vulgarity fall? I have two theories:

Strategy: Most gamers are drowning in twelve-packs of ‘Dew as we speak. These are the people that think sudden on-set spasms are normal: they’re wound-up like watch springs, and the first word out of your mouth will set them off. You could be cleaning house in a server, getting an endless stream of multi-kills, up until caffeine boy shouts into the mic: “You noobtubing punk! Admin! Admin! Somebody kick this hacking piece of –“ the whole game goes to hell. You didn’t even use a noobtube, either! Your retort probably contains a plain GTFO/STFU, spoken with hope to continue your game in peace, but we know that won’t happen. He’s just flamebait – he knows exactly what is going on, and he’s going to mic-spam the server until you decide to hunt him down. It’s time make sure he doesn’t spawn long enough to see the light of day, right? Wrong. You’re now probing  a thirty-slot server in pursuit of the one t-bagging douchebag that is singing into his mic. Instead of focusing on the entire enemy team, you avoid the easy kills and save all your munitions for that troll. This heedless inquisition leads to a decline in KDR akin to that of our stock market, and you can’t even find this guy. Good game. You just raged without even knowing it, meanwhile the troll is in a stupefying fit of laughter. He knows exactly how pissed you are, and he’s going to keep hurling those insults at you until you finally leave.

It’s the oldest trick in the book, but definitely not the only trick.

Threat Replacement: On the other end of the spectrum, it could be that the player targeted for verbal assault is currently being ineffective. Zero kills, infinite deaths, and no flag caps to speak of. The rage builds up within them, eventually leading to an eruption of the most vibrant mosaic of swearwords ever to grace this planet. Words invented on the spot – the kid’s a Shakespeare prodigy, spouting things like, “You grenade-molesting, floppy-headed motherbitch! I’m going find where you live and kill you so hard!” (note: taken from a real game of CoD4). The server freezes. For the first time in Internet history, all the players in the game are literally rolling on the floor laughing. Even if this chump could find enough change in the couch to pay for a taxi, he’s nothing without his headset.

There’s always that third reason for everything, but this is the reason why we do as the column name suggests (that’s ragequit, by the way). The pre-teens with a potty-mouth the size of my server’s new hard drive, hell-bent on letting every damn one of us know how amazing they are at games. Alas, that is another time, another rage.

What makes this happen to you? Can you remember some of the funny combinations of words you've used while gaming?