If belligerent gamers ignorantly complain about price to content ratio and have no regard whatsoever for your insistence as a developer to release only sequels, consider the following briefing.

Gamers are a sub-species that is most difficult to please. "The pricing of video games is unfair!" they lamented, "fix the price point," they cried. So we did. Taking heed of their most obvious dissatisfaction, the industry made the challenging decision to fix that pricing system by increasing the average price of a game from $50 to $60. Problem solved! Frustration averted! Now we can finally sit back, relax, and have our enslaved indentured developers do their magic. The ensuing backlash stunned Research & Development departments industry-wide; they could not understand what had unfolded: the gamers were still unhappy! Those ingrates! Yet again they cry, this time perhaps louder, that the price is truly undignified. Can't you moneybags just buy our games and leave us alone? It's really that easy.

Fine. We'll fix the prices... again! Now when you purchase your $60 commodity, divinely crafted by Gods such as Bobby Kotick, you can also purchase - wait for it - downloadable content! Yes! We've replaced that pesky patching system with nickel-and-dime styled upgrades! For only $1.89, you can get that awesome horse armor you never knew you wanted; for 800 MSP, a new map; $15 will grab you an entire 'stimulus package!' How about that?! Once again, crisis dissolved.

Unless the gamers complain again.

... which they did. The steps should be quite simple, really:

1. Gamers purchase our new game, Call of Halo: Modern Sequel 17, for $60.
2. When the six maps included lose their appeal, we release four new maps for $15.
3. Gamers are now happy with the game once more, their wallets no longer slow them down, and they can expect more DLC in the future! 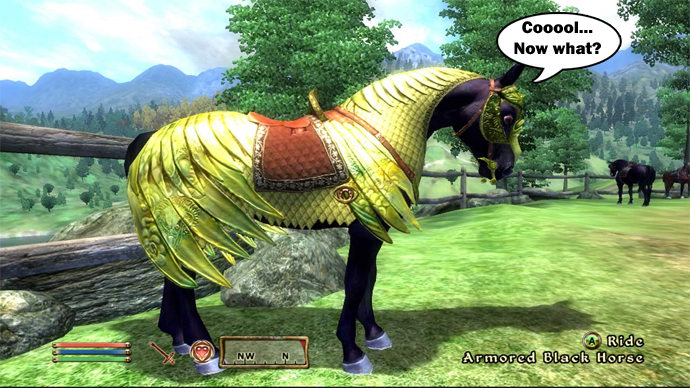 Yes. This is my perception of how the big-name gaming conglomerates understand their consumer base. They used to be called patches, expansions, or just free plugins; the developers fixed up broken content and provided new content all in a single, downloadable patch. Publishers and developers worked together to include such patches solely out of their love for the masterpiece they created. The introduction of DLC removed the soul of the software and created a churn resembling the snowball effect... only with money, not snow.

For years modders have provided top-quality modifications of original games that outclass the more recent $10, two-hour long content sold by developers, so with that in mind - why buy DLC? Of course the answer is summed up in one, maybe two words: Consoles (or 'Microsoft'). DLC is just business as usual in the industry.

What do you think? Will the industry continue to devour its consumers?