Singleplayer and Multiplayer CAN Co-Exist, Damn it!

There has been some growing concern in the gaming community - a theory that disheartens hardcore, originalist gamers like myself: are single-player games being superseded by multiplayer frag-fests? In an industry that prides itself on community interaction and the vast quantities of titles and genres, are single-player games actually becoming obsolete? Damn. I really should stop reading those forums.

It's all preposterous! Single-player titles will not be going anywhere anytime soon.

The logic behind these fears stems in large part from the steady increase over the years of fantastic multiplayer titles, ranging from fighting games like the Soul Calibur series to FPS's like those dastardly Halo titles we have all come to respect. Personally, I'm a fan of MMORPGs - especially with emergent games like Star Wars: The Old Republic - and as a genre, they allow you to fully immerse yourself into a story while still having a huge multiplayer element. Well, as long as the grind is successfully masked. However, to believe that these games can replace the visceral experience of becoming Kratos from God of War, the Dragonborn from Skyrim, or even the freaking Batman from Batman: Arkham City and Arkham Asylum is as ludicrous as it is fallacious.

It's easy to mistake an increased focus on implementation of multiplayer elements as an outright sacrifice of the single-player experience. I can't deny the race toward multiplayer support -- and it is true that many single-player games are adding supplemental multiplayer compatibility -- but games like Warhammer: Space Marine are meant to be played in the single-player world. To be able to fully appreciate this game in all of its glory, one must go to battle with orks and demolish the demons of chaos in a fully-realized and fully fleshed-out story. In fact, the multiplayer often feels like a sideshow or after-thought; it's fun, but most certainly not the focus of the game (and absolutely not worth the scam-worthy $60 price that games now ask).

There are still far too many players that want an immersive storyline -- especially those that fall into our "adventurer" gamer personality -- in a single-player experience and either (A) don't play multiplayer, or (B) enjoy bashing in skulls on multiplayer, but want to get the most out of the game that they paid oh-so-much for.

Like in some MMORPGs, a story worthy in concept of a full single-player game can be told through NPCs and background events, yet still have a solely multiplayer experience. I recently started playing War of the Immortals, and I must admit the story is fantastic... but it is extremely difficult to produce an MMOG that has a story anyone really cares about. How many people actually know what happens in World of Warcraft or City of Heroes, honestly? It's about leveling and questing. In the case of MMORPGs and other multiplayer-heavy titles, game designers work within the confines of a budget that allows them to allocate a marginal amount to the narrative of the game, perhaps even hire an expensive voice actor, and shift the rest of the focus on multiplayer weapon balance and mechanical elements. This makes for a backdrop with as many holes in it as the corpse of a dead grunt in Halo. 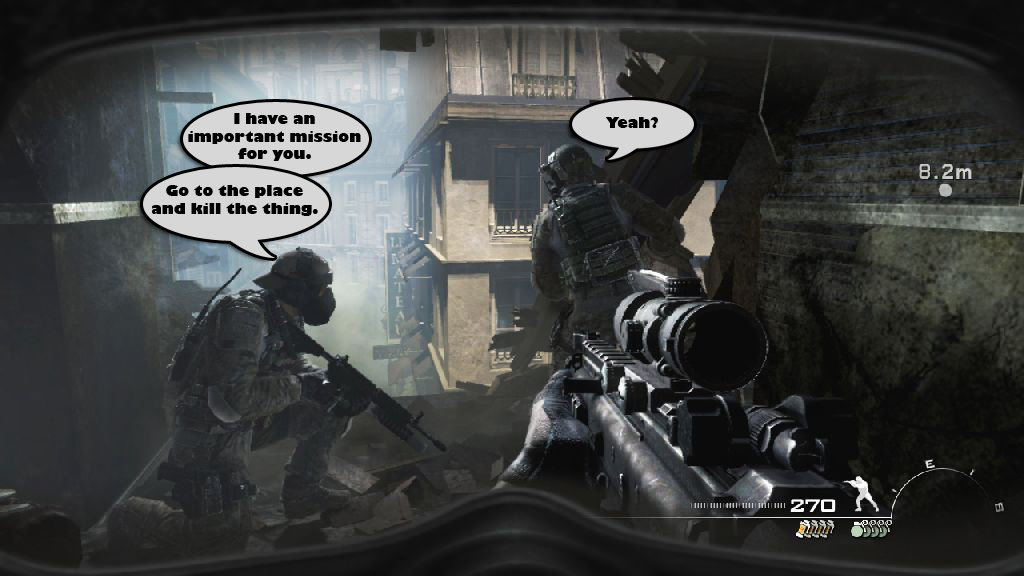 Where did this idea that multiplayer games will be the death of single-player come from in the first place? The Konsole Kids that our ragequit columnist has complained about before are largely responsible for the appearance that the market is escalating in multiplayer gaming. That's just an appearance. Without so much as ever venturing into the campaign mode, they've dictated that developers create an increasingly-competitive multiplayer environment at the expense of any believable single-player whatsoever. This isn't to knock multiplayer -- no, we're all fans of that -- the problem is that other devs feel pressure to move into a more profitable, more exposed division of gaming (normally with innovative gameplay that involves pointing, shooting, and reloading).

Taking this into account, one must also recognize that there is an entire subculture of gamers out there who share the exact opposite view – single-player is the only option for them as multiplayer tends to be aggressive, overly-competitive, and at times thoroughly frustrating. I have never wanted to throw a controller into my television when playing Skyrim or Deus Ex: Human Revolution, but I can't count the number of times some troll on Modern Warfare 3 has angered me to the point of smashing my Xbox 360. Single-player gamers tend to prefer the immersion of the game, not competition with others, it is merely an opposing viewpoint and cannot be ignored by any means.

While this argument may seem at first to tear the gaming world apart, in doing so it creates a very unique circumstance to the industry: opportunity. Game designers are quickly learning that to create a truly fantastic experience, they do not necessarily have to stick to one style of play. Games can be created that are solely single-player (like Ninja Gaiden II), solely multiplayer (World of Warcraft), or a little bit of both (Mass Effect 3). The competition that I mentioned earlier -- the one that pushes devs to analyze the yield of multiplayer titles -- is the very same competition that pushes developers to say, "You know what? We can make a way better single-player game than anyone else right now. We might not have multiplayer, but we'll make the best single-player experience possible."

This allows for more growth in the industry, which means that if anything, multiplayer games are assisting in the growth and development of single-player titles by not taking up space in that specific market, despite the competitive push toward one way or another.

These two game styles make for vastly different experiences, allowing the game industry to capitalize on the very different opinions gamers have on single-player vs. multiplayer functionality. The benefits to having both single-player and multiplayer games far outweighs the idea that one is somehow better than the other, and I stand firmly against the notion that single-player will be leaving us any time soon, it is too big of a market and provides too many benefits to be leveled by the train that is multiplayer titles.