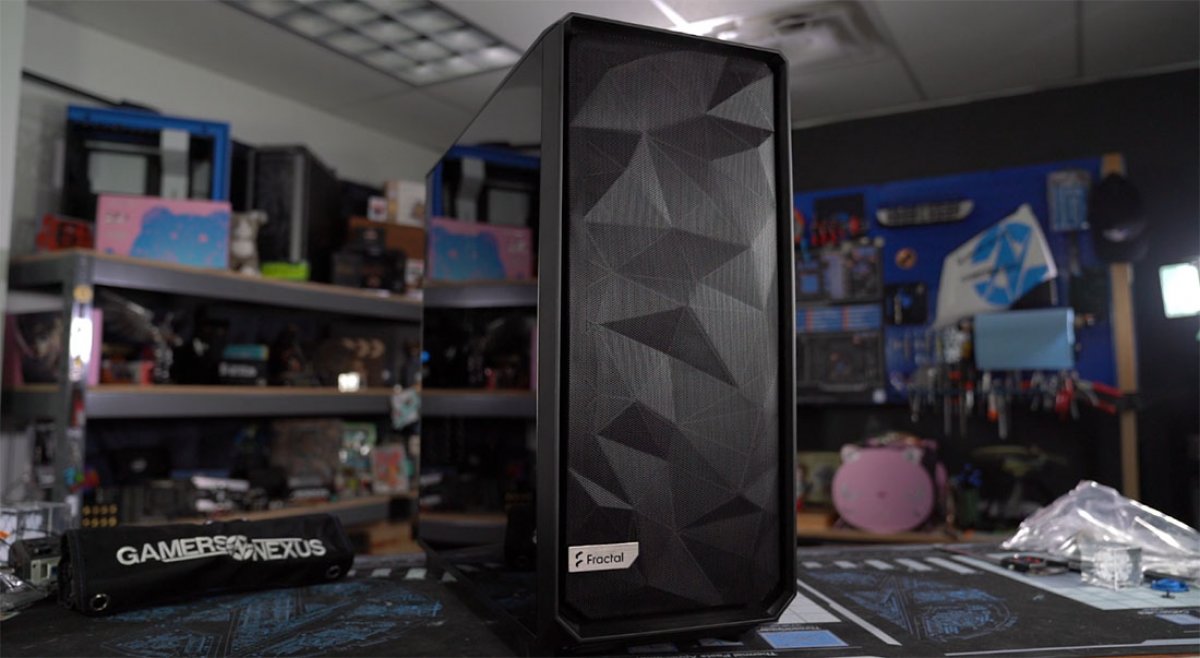 We’re keeping the build section relatively brief this time to avoid repeating information from our Meshify 2 non-XL review. Check that content for basic information on elements that the two cases share, like cable management and the front panel design--this review fills in the blanks and adds additional information, so the original content is must-see for anyone considering buying one of these cases. 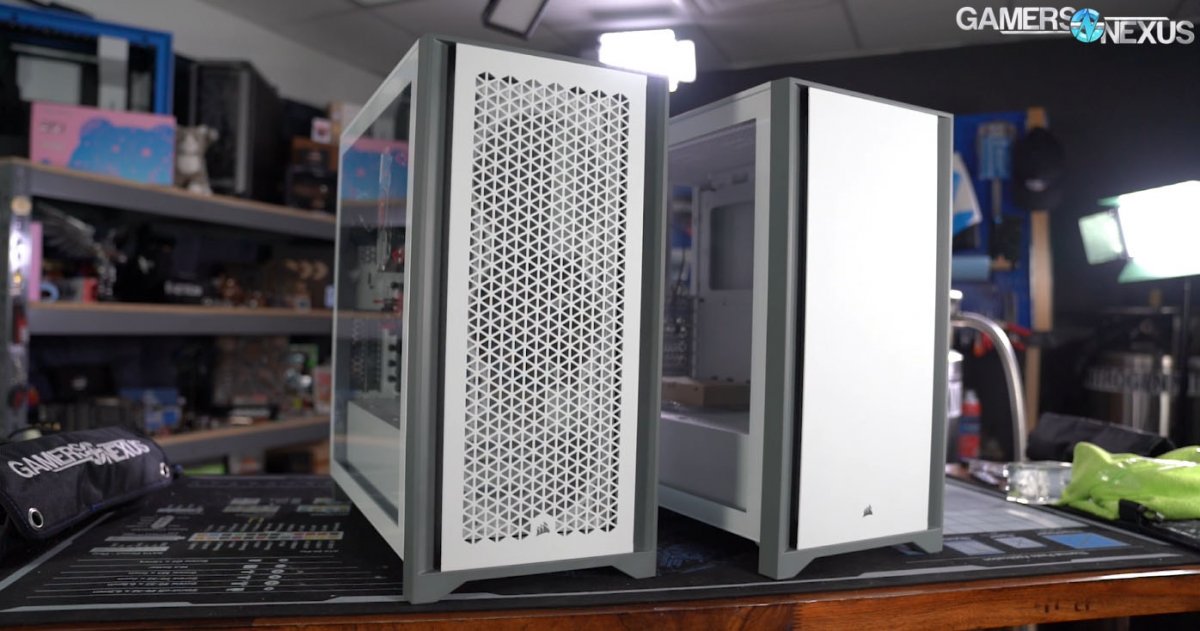 We’ve been sent three cases for review by Corsair: the 4000D, the 4000D Airflow, and the 4000X. Today we’ll be covering the two 4000D variants, since they’re entirely identical other than the “front bezel” plate that ships with the enclosure. Companies like Phanteks and Cooler Master have sometimes handled situations like this by sending us multiple front panels, but Corsair is fighting hard to eliminate our last few square feet of storage space--we have all three. As of this writing, all 4000D SKUs are available for sale for $80. 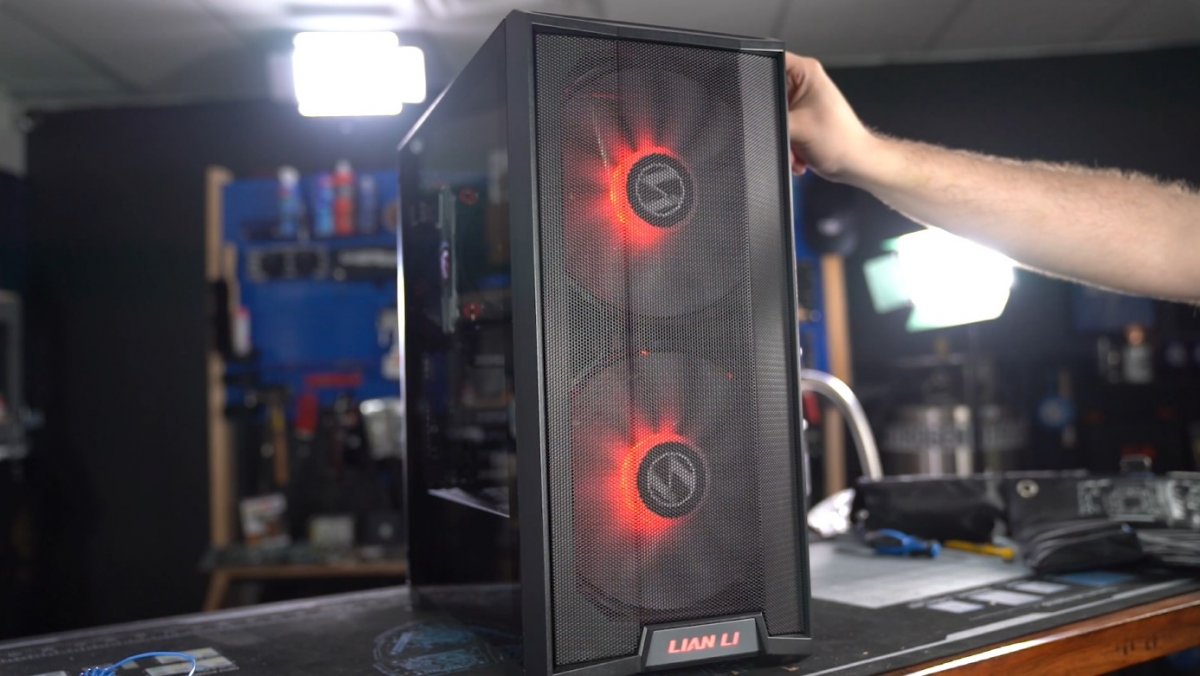 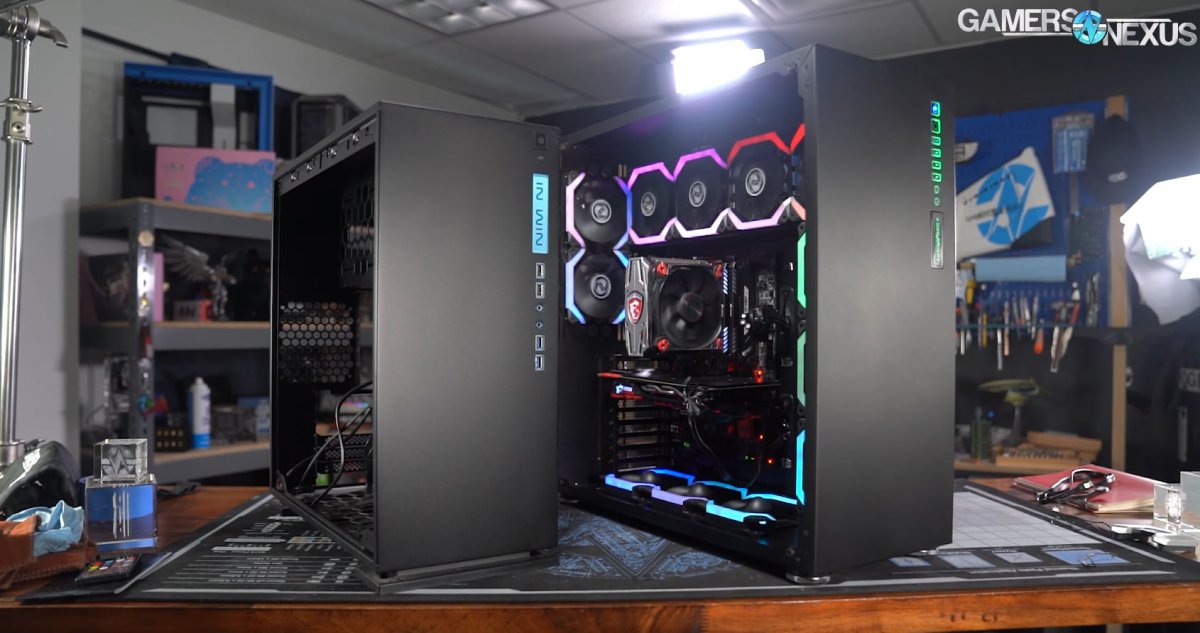 The Abkoncore Ramesses 780 is a case that our friend Brian from BPS Customs discovered back in mid-2019. He dubbed it “the most interesting case I’ll never build in,” and with encouragement from our benevolent community he then decided to dump it on us. At first glance, the 780 is a full-tower that seems visually inspired by the In Win 303, with the most unique feature being the twelve preinstalled 120mm ARGB fans. We say visually inspired because the 780 lacks most, if not all, of the functional features that merited our Editor’s Choice and Quality Build awards in our 2016 review of In Win’s case, which admittedly has flaws of its own to begin with. Let’s not mince words: the Ramesses 780 is a bad case, and it was specifically sent to us because everyone knew we would say so. That makes it hard to decide where to begin, so we’ll treat this like a normal review and start with the build process.

The Phanteks P400A Digital was our winner for best overall case in 2019, but our feelings were mixed about the less-expensive P300A because of its single stock fan. Today, we’re reviewing the latest addition to the family, the Phanteks Eclipse P500A Digital, to see whether Phanteks is back on track.

Like the P400A, the P500A comes in both normal and “digital” variants. The base model comes with two 140mm non-RGB fans, the digital version comes with case lighting effects and three 140mm “D-RGB” fans, which is how Phanteks refers to addressable RGB. Listed specs for the fans are identical other than the LEDs. The lighting is compatible with the 3-pin 5V headers used by ASUS, MSI, ASRock, etc. Other than the fans, thin strips at the top of the front panel and along the edge of the PSU shroud are lit. The base model has a reset button, the D-RGB model replaces this with color and mode buttons. The built-in controller has baked-in lighting profiles for those that can’t or don’t want to use control software.

EK is best-known for its open-loop liquid cooling components, as we show at CES every year in the company’s bombastic display of systems, but that’s a small market, and EK has been trying to get into closed-loop liquid coolers for years. The EK AIO series is its newest attempt at that, but after facing one delay after another for shipping, it’s taken some time. Today, we’re reviewing the EK AIO 360 and 240 closed-loop liquid coolers for thermals, noise, noise-normalized thermals, coldplate levelness, efficacy on Intel and AMD platforms, and more.

EK’s AIO D-RGB series of coolers is a new approach to closed-loop liquid coolers from EK, most recently shown in public at CES 2020. Following that public update, the company encountered months of setbacks, but has finally reached the market with its new liquid coolers. Competition is fierce for CPU coolers right now, with Arctic’s Liquid Freezer II, which we reviewed here, posing the biggest challenge for EK.

Pricing for EK’s solution lands at $155 (via EK’s website) for the EK AIO D-RGB 360 and $120 for the AK EIO D-RGB 240. At time of writing, the Arctic Liquid Freezer II 280 is $95, but out of stock (at least via Amazon, and Newegg). It’s been mostly out of stock following positive reviews like ours, so although the LF II is directly competitive in price and performance (seen below), it’s somewhat moot if no one can buy it.

NOTE: This is a transcript of our video, for the most part, although the video has some more discussion in the intro and conclusion than found here. We publish these articles to be helpful, but make most our money to sustain this expensive operation via videos. If sharing the content, please consider sharing the video instead.