Today, we’re reviewing the GTX 1660 Ti, whose name is going to trip us up for the entirety of its existence. The GTX 1660 Ti is NVIDIA’s mid-step between Pascal and Turing, keeping most of the Turing architectural changes to the SMs and memory subsystem, but dropping the official RTX support and RT cores in favor of a lower price. The EVGA GTX 1660 Ti XC that we’re reviewing today should have a list price of $280, sticking it between the $350 baseline of the RTX 2060 and the rough $200 price-point of modern 1060s, although sometimes that’s higher. For further reference, Vega 56 should now sell closer to $280, with the RX 590 still around the $260 range. 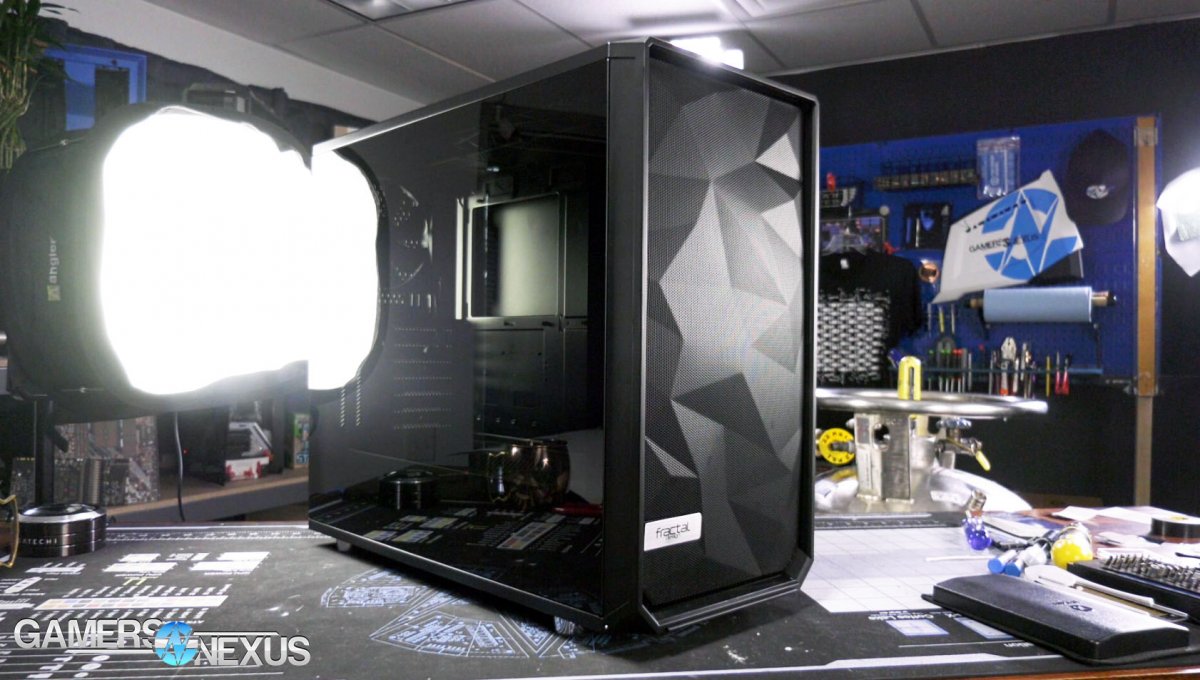 This is a review of a revision of the Define S2, a case which we already dismissed as nearly identical to the Define R6 (a case we liked and found of high build quality), making this the third review we’ve published of the same(-ish) enclosure. That description may not sound promising, but the newest case’s name does: the Meshify S2 establishes a trend of Fractal “meshifying” cases by replacing solid front panels with better-ventilated ones, as they did previously with the Meshify C (another case we liked) and Meshify C Mini.

Our AMD Radeon VII review is one of our most in-depth in a while. The new $700 AMD flagship is a repurposed Instinct card, down-costed for gaming and some productivity tasks and positioned to battle the RTX 2080 head-to-head. In today’s benchmarks, we’ll look uniquely at Radeon VII cooler mounting pressure, graphite thermal pad versus paste performance, gaming benchmarks, overclocking, noise, power consumption, Luxmark OpenCL performance, and more.

We already took apart AMD’s Radeon VII card, remarking on its interesting Hitachi HM03 graphite thermal pad and vapor chamber. We also analyzed its VRM and PCB, showing impressive build quality from AMD. These are only part of the story, though – the more important aspect is the silicon, which we’re looking at today. At $700, Radeon VII is positioned against the RTX 2080 and now-discontinued GTX 1080 Ti (the two tested identically). Radeon VII has some interesting use cases in “content creation” (or Adobe Premiere, mostly) where GPU memory becomes a limiting factor. Due to time constraints following significant driver-related setbacks in testing, we will be revisiting the card with a heavier focus on these “content creator” tests. For now, we are focusing primarily on the following: 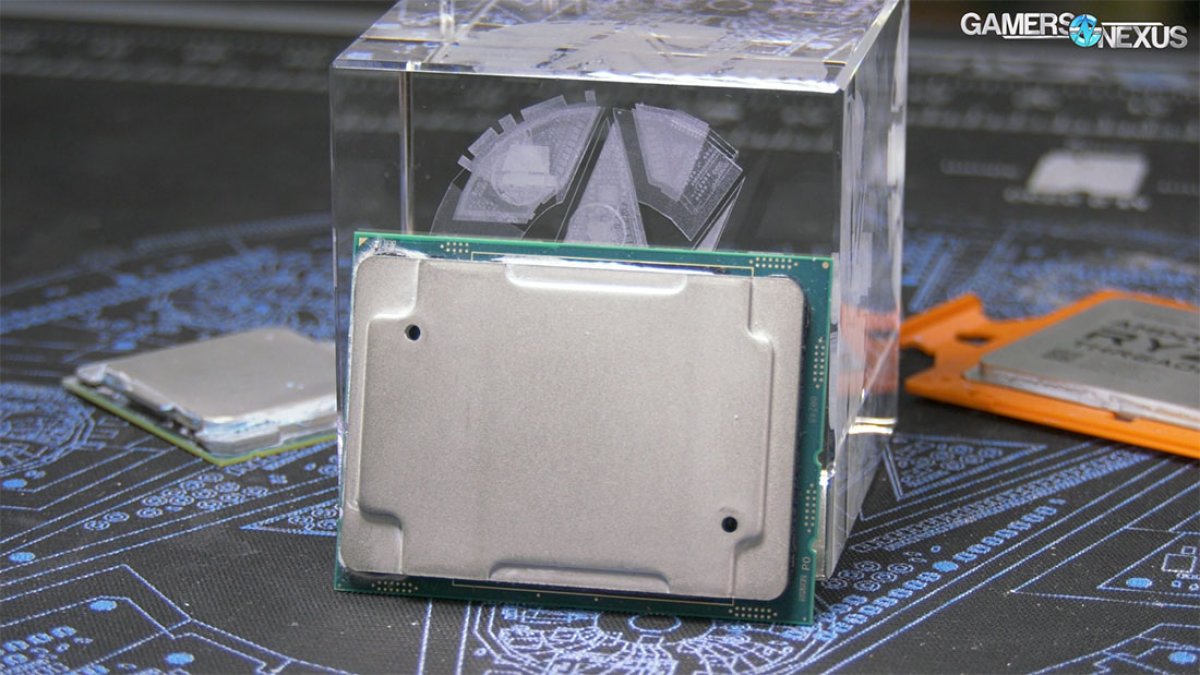 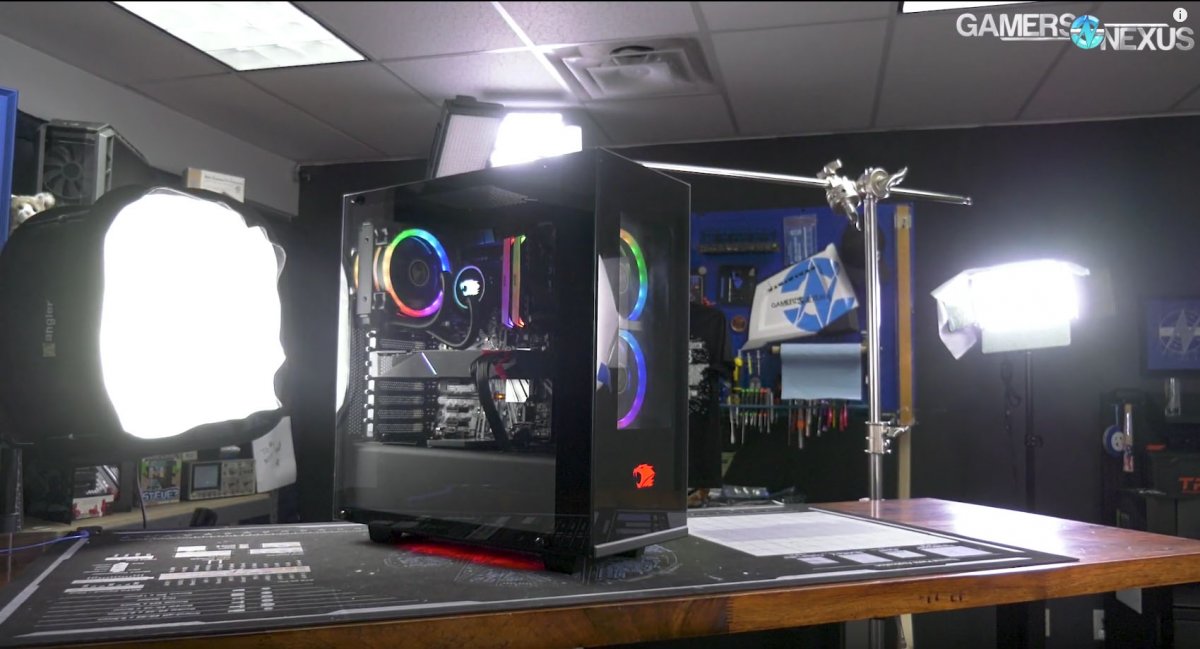 We recently reviewed (and weren’t impressed by) the Thermaltake Level 20 MT, but Thermaltake is nothing if not prolific, and there’s always a new enclosure to try. The A500 TG was released back in October under the full name “Thermaltake A500 Aluminum Tempered Glass Edition Mid-Tower Chassis,” and enters the lab today for a full thermal, acoustic, and build quality review.

Thermaltake’s A500 case primarily touts aluminum, glass, and trend-advancing features without necessarily introducing new ideas. It’s OK for a case to advance features rather than invent them, but it really must make advancements at the $250 price-point of the A500.

Today, we’re reviewing the NVIDIA Titan RTX for overclocking, gaming, thermal, and acoustic performance, looking at the first of two cards in the lab. We have a third card arriving to trade for one defective unit, working around the 1350MHz clock lock we discovered, but that won’t be until after this review goes live. The Titan RTX costs $2500, outbidding the RTX 2080 Ti by about 2x, but only enables an additional 4 streaming multiprocessors. With 4 more SMs and 256 more lanes, there’s not much performance to be gained in gaming scenarios. The big gains are in memory-bound applications, as the Titan RTX has 24GB of GDDR6, a marked climb from the 11GB on an RTX 2080 Ti.

An example of a use case could be machine learning or deep learning, or more traditionally, 3D graphics rendering. Some of our in-house Blender project files use so much VRAM that we have to render instead with the slower CPU (rather than CUDA acceleration), as we’ll run out of the 11GB framebuffer too quickly. The same is true for some of our Adobe Premiere video editing projects, where our graph overlays become so complex and high-resolution that they exceed the memory allowance of a 1080 Ti. We are not testing either of these use cases today, though, and are instead focusing our efforts on the gaming and enthusiast market. We know that this is also a big market, and plenty of people want to buy these cards simply because “it’s the best,” or because “most expensive = most best.” We’ll be looking at how much the difference really gets you, with particular interest in thermal performance pursuant to the removal of the blower cooler.

Finally, note that we were stuck at 1350MHz with one of our two samples, something that we’ve worked with NVIDIA to research. The company now has our defective card and has traded us with a working one. We bought the defective Titan RTX, so it was a “real” retail sample. We just wanted to help NVIDIA troubleshoot the issue, and so the company is now working with it.