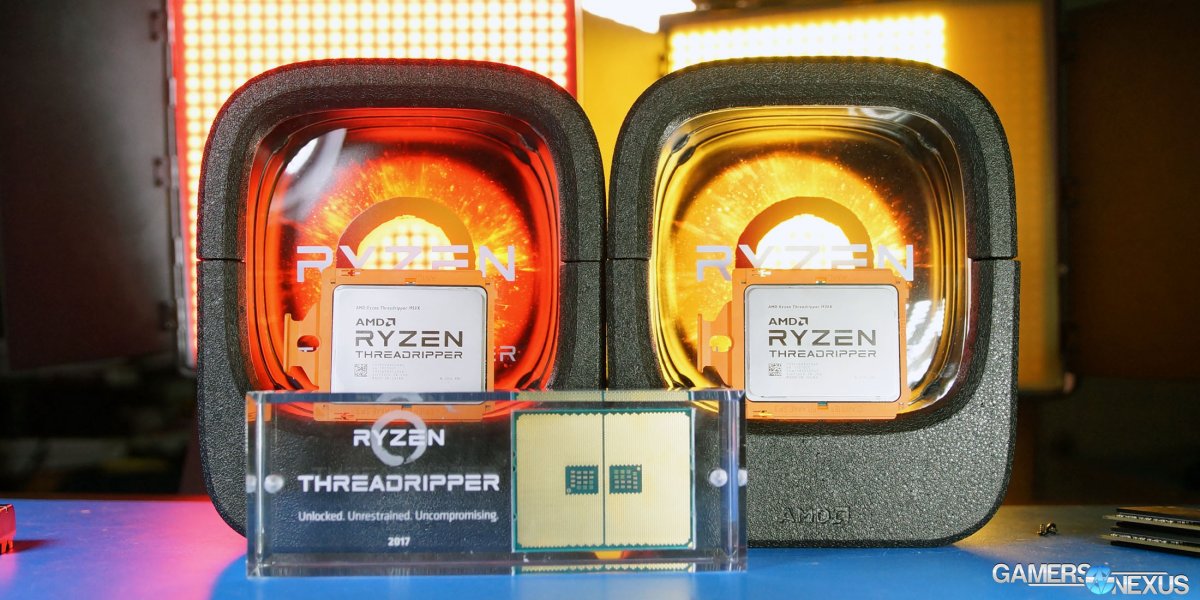 Threadripper 1950X (launch MSRP $1000): Let’s start with the big one: The Threadripper 1950X CPU, which we reviewed originally here and for which we’ve updated game tests here, usually retails at $1000 MSRP, but is now $800. We had already declared Threadripper to be an exceptionally fierce competitor to nearby Intel i9 CPUs – primarily the i9-7900X – but at $800, it’s a no-brainer for users of heavily multithreaded workstations. Anyone working with rendering workloads that lean on the CPU would be wise to consider the Threadripper 1950X. One use case would be data sets with large vectors or tile-based renders, particularly those with short per-tile render times (benefiting the CPU tile-count over fewer GPU tiles).

Recommended motherboard for TR 1950X CPUs: If you’re looking for a motherboard to go with it, we can recommend the Gigabyte X399 Designare or ASUS Zenith Extreme.

AMD Ryzen R7 1700X (launch MSRP $400): Although the 20% price reduction on Threadripper was impressive, the R7 1700X has undergone precipitous drops to $280 (and lower) lately. Presently, at the time of this writing, the R7 1700X is priced at $280 with the cooler, and is normally priced at its $400 MSRP. The R7 1700 is $10 cheaper at $270 and, if you’re overclocking, is basically the same thing. Save the ten bucks. If not overclocking, the 1700X will give higher out-of-box clocks, and would be worth the $10. At $400, we never really liked the 1700X – we though the 1700 made far more economic sense, and that a 10-minute overclock would counter the difference. At $10 more than the 1700, as opposed to the usual $100 increase, it’s much more sensible to recommend – almost crazy, really, and is a testament to the MCM configuration that allows AMD to shuffle the same Zeppelin dies between all CPUs. If you were already in the market for an R7-class CPU, now seems to be a good time to jump on one. If you’re not sure if Ryzen is right for you, check our CPU Awards guide.

Recommended OC motherboard for the R7 CPUs: Our AM4 motherboard guide goes live at 3PM EST today, but if you’re looking for a board to go with the R7 1700X, we can recommend the Gigabyte X370 Gaming K7 as a high-end overclocking option. The K7 has a clock gen with 1/100th MHz accuracy, a strong VRM, dual-BIOS, and a good price. That’d be well-suited for the R7-class CPUs.

AMD R5 1600X (launch MSRP $250): The R5 1600X, which received an Editor’s Choice Award and whose non-X counterpart was given the Best Overall award, is presently available for $200 via Newegg and Amazon alike. The R5 1600(X), we think, offers tremendous value over competing i5 CPUs. Where the i7-8700K and 7700K remain leaders in raw gaming performance, particularly the 8700K, the R5 1600 and 1600X stay much closer to i5 CPUs in gaming workloads. Coupling this with the fact that (1) 8th-Gen i5 CPUs are presently overpriced, and (2) non-Z370 motherboards aren’t yet available, and you’ve got the R5 CPUs leading the mid-range class. We like the R5 1600(X) for its versatility as an entry-level production CPU and well-suited gaming option.

Recommended OC motherboard for the R5 CPUs: To OC these CPUs reasonably, you could get by well with either the Gigabyte X370 Gaming K5 ($135, includes clock gen, but slightly weaker VRM) or ASUS X370-Pro.

Check back later today for our Best AM4 Motherboards guide.