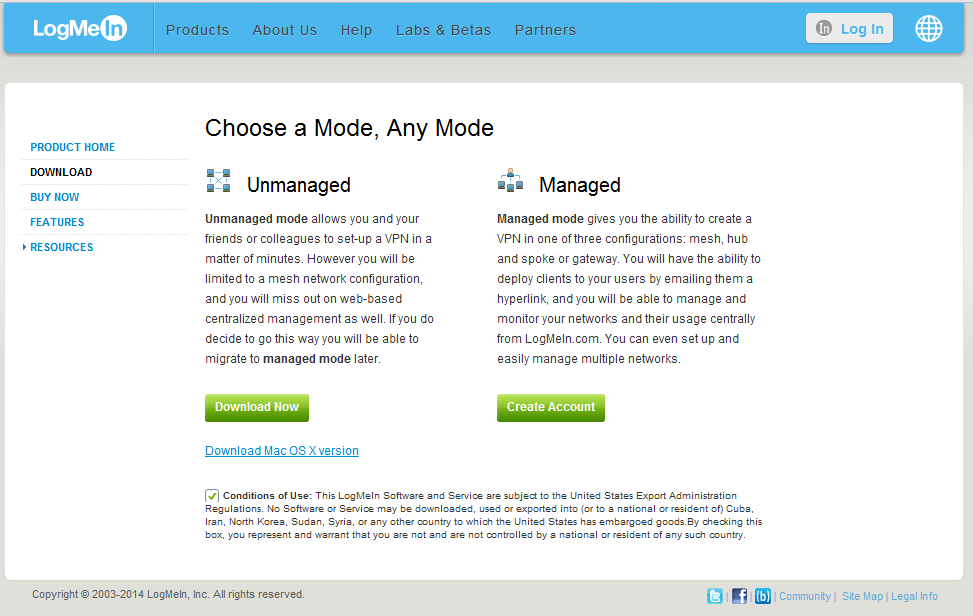 LogMeIn Hamachi differs from the others in this article in one large way: It is impossible to find a game to play just by logging in. The intention here is to create an actual virtual private network (VPN) between the computers that are using this. It is a requirement to either create a network or log in to someone else's network. This isn't bad, as it ensures the players will most likely know each other and can trust the VPN; keep in mind that more progressive malware can be transferred in this way if machines are not clean. There are forums set up to find people in the event you need friends to join. 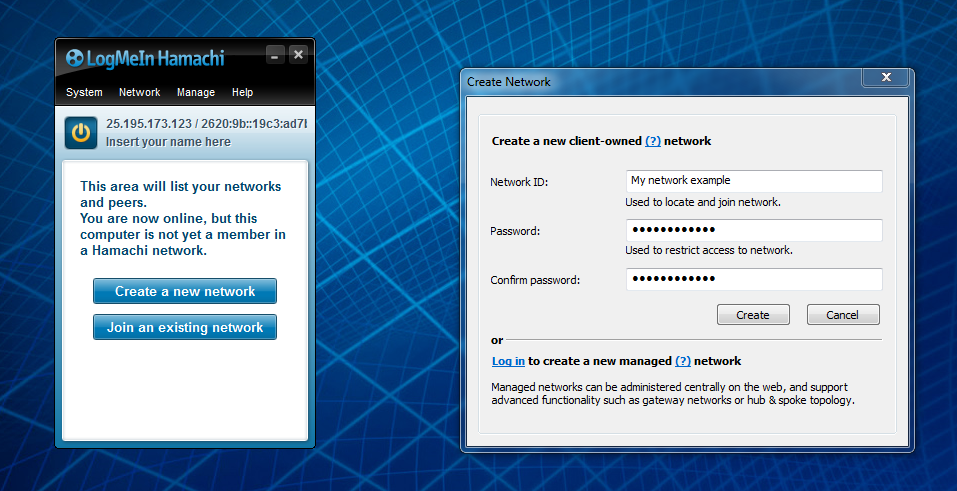 The program itself is fairly simple to use, but does require a few extra steps. First, you need to download the unmanged version, which is free. After installing it, open the program and create the name of your system (this is how you will be identified when joining networks). There are now two options -- join a pre-existing network or create your own. If joining a pre-existing network, just enter the network id and password (if it has one) and it should connect as long as there is room in the server. 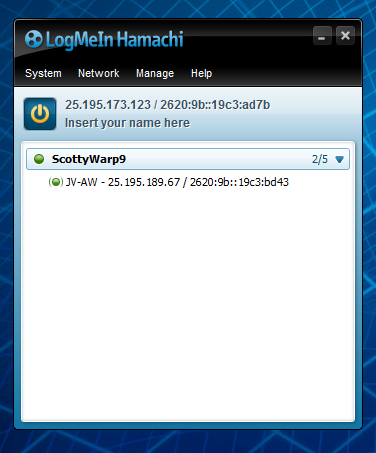 To create a network, select that option and move forward. This will most likely trigger Windows' network wizard to help with setting up. Create it as a public network for the easiest and slightly more secure way of sharing. Home and Work network options can allow those who join the network to access certain parts of the system if not done correctly. Create the network ID and password (free version requires password to create network) and then share with up to 4 others, max is 5 people in the unmanaged free VPN setup.

Once people are in on a network, they can open and play any game that has LAN as a multiplayer option. 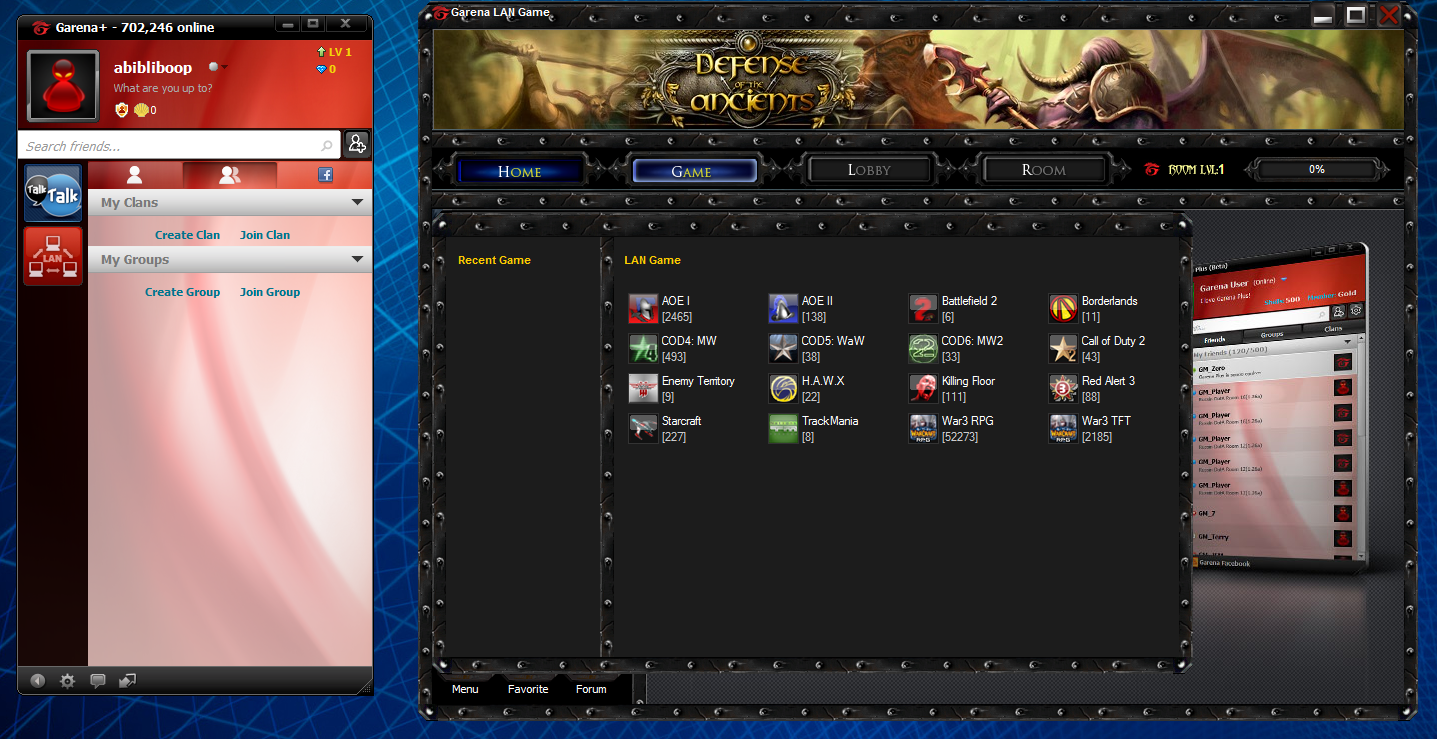 Garena is by far the easiest of all the programs to get going. It is a simple download, install, create account, and run situation. There is no verification email when creating the account, so that saves a step over GameRanger. The only downside is that there is a very limited selection of older LAN games, at least for those outside of their current target market.

With over 575,000 online, the community is much larger than Tunngle's (see below) but the inability to find the games I want to play is frustrating. This is currently a beta release, so it is hoped, at least by me, that when the program is fully released it will have a better selection of games for those outside the Asian market. It is possible to access the games on the regional servers they have, but again the selection is very limited. 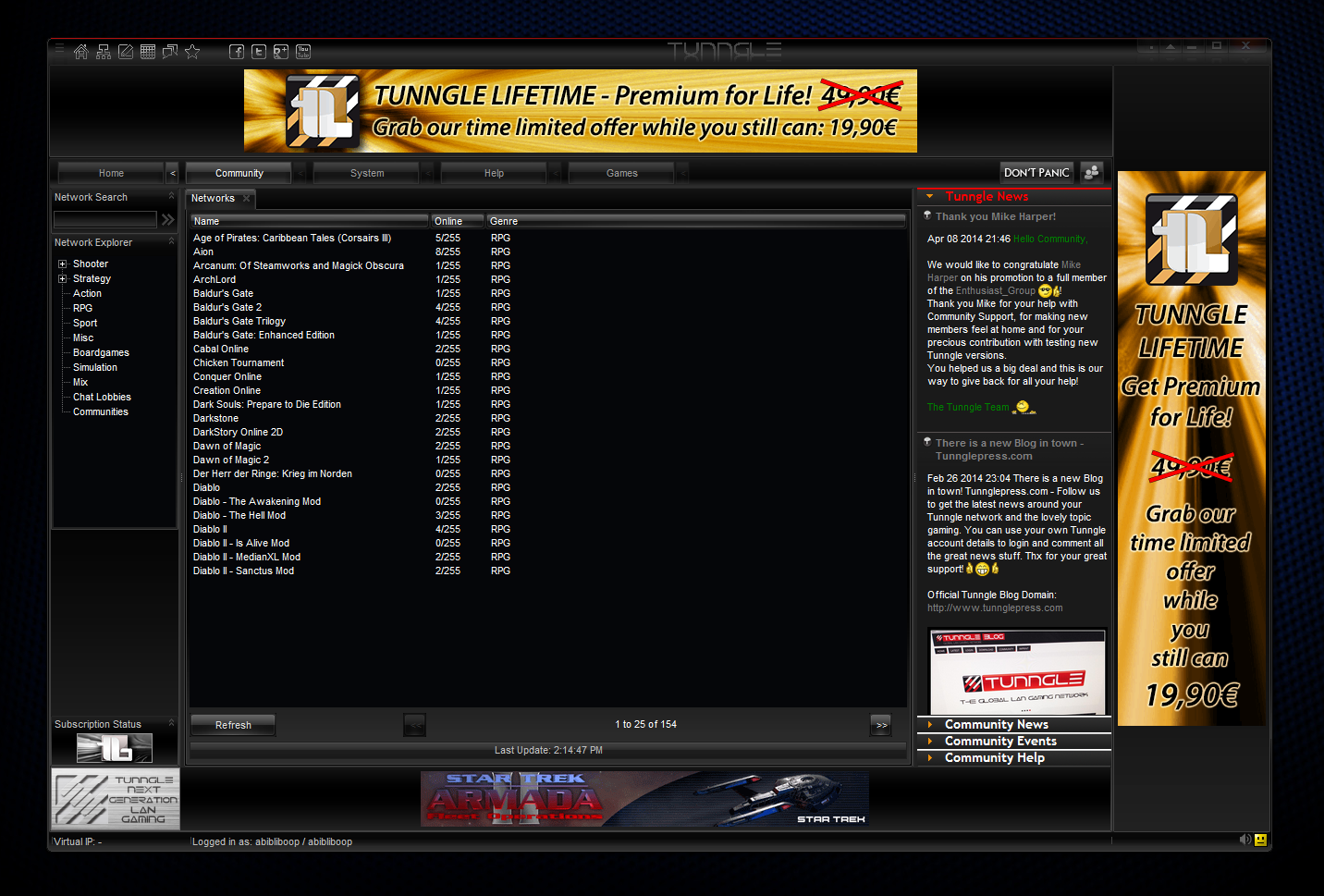 Tunngle, also in a beta build currently, is a VLAN hosting site that enables people to play any game that has LAN connection capabilities. The interface is simple and straight-forward, but it is the slowest to load, takes up the most resources, has ads galore, and has the smallest community of active players. It is also, by far, the largest headache to install.

The download page redirects repeatedly. It's almost enough to make me think they don't want me to use their product. Of the programs tested, it is the slowest to download and install. The file is not huge, only 15.5 MB, but it took over 10 minutes to download; all the other programs combined took under 3 minutes to install. My only guess is it is being throttled on the side of the site hosting the Tunngle installer. It is also the only installer that requires a system reboot.

After surviving the install process—I'm impatient—it wa then time to create the account. This asks for the most information and has 2 proof of human tests. It will then send an email verification. Now it's time, finally, to play anything that has the ability to connect via LAN, assuming you are able to find people online. Just like with LogMeIn Hamachi, anything that has LAN multiplayer is accessible by using this program. The community is not very large, though. This also has links to web-based browser games if those are of any interest.

Using Game Ranger as an Alternative to GameSpy 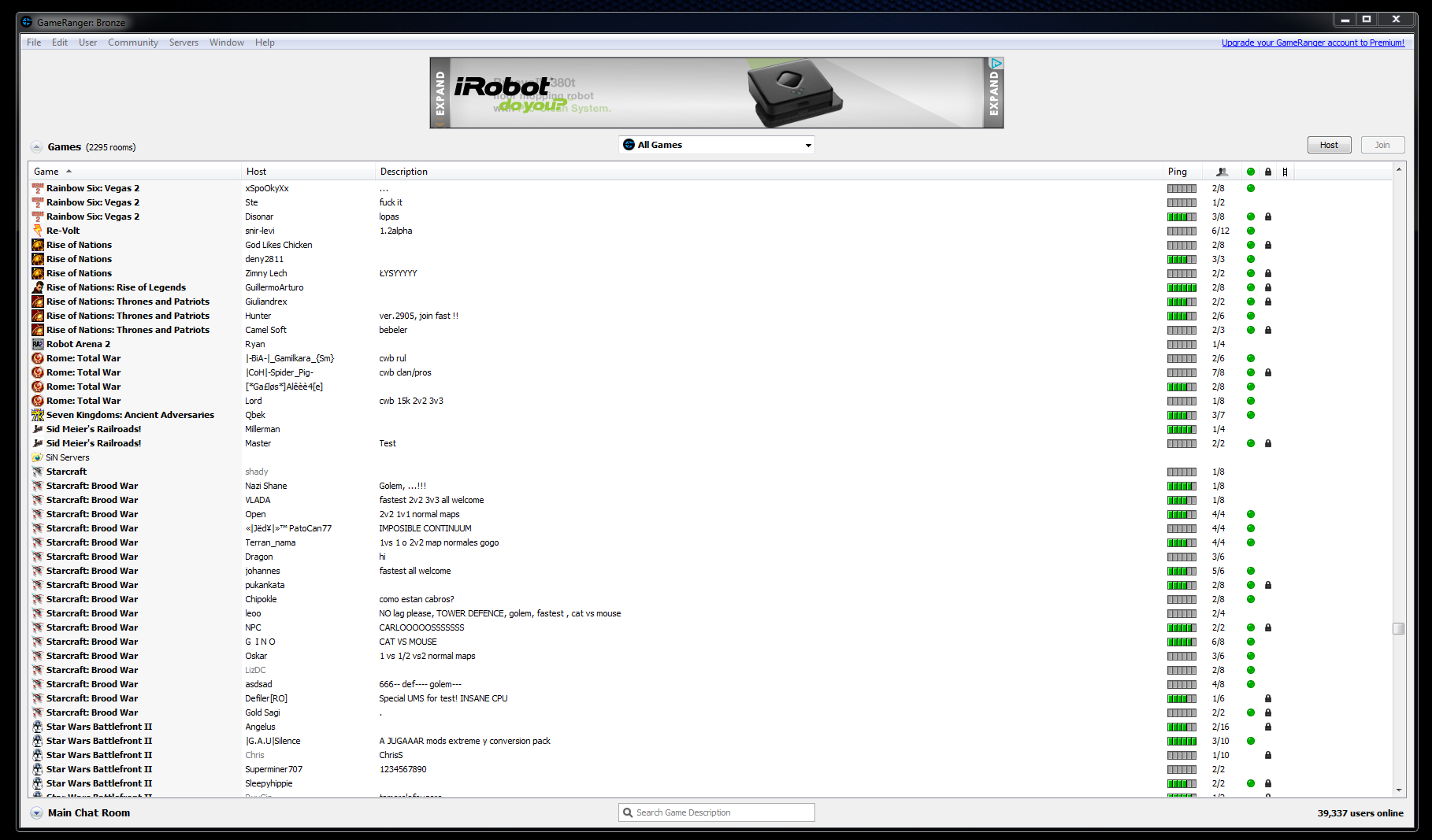 GameRanger has been around almost as long as GameSpy. It operates under the same principle as most game hosting sites do. This involves logging in, find the game to play, and either hosting or joining an already hosted game (often P2P). Very simple and straight-forward, and it has a community that just surpassed 5 million registered users back in March. It also features ladders and rankings, friends lists and instant messaging, and most of the other goodies that a gamer would expect. With a community this large, if the game is available, this is a great choice to use. GameRanger must support the game already to use it, but it is one of the most stable networks; with GameSpy's death, it is reasonable to hope GameRanger will add on legacy titles that they don't already support.

For a full list broken down by PC, Mac, or cross-platform of the games currently supported, check out: http://www.gameranger.com/games/

After creating an account, a verification email will be sent, and then it's as simple as a login and finding a game to play.

Let us know if you need help setting up Hamachi as a means to virtualize LAN or as an alternative to GameSpy / GameRanger.