How To: Install Steam Games to Different Hard Drives

Our SSD article kicked off a discussion among a few forum users and commenters, even a couple of staff, all wondering how to better manage limited SSD space when Steam forces its games to be installed on a single location on the hard drive. Due to this Steam restriction, you're basically forced to have all of your games on a single, designated drive, at which point -- if you had a 60-100GB SSD, you'd have to add and remove games quite frequently.

In this short tutorial, we're going to address the question of how to move Steam games to a different drive or folder/directory. It's quite easy, actually, and we're going to do it all with a simple utility that I discovered about a year ago when I had the same questions.

Fair disclaimer: neither we nor the author of the utility can guarantee the safety of your files, so please back up your save game data prior to transferring it en masse. This will ensure the security of your save games in the event the game gets corrupted, which it likely won't, but it's always possible given the amount of people out there. 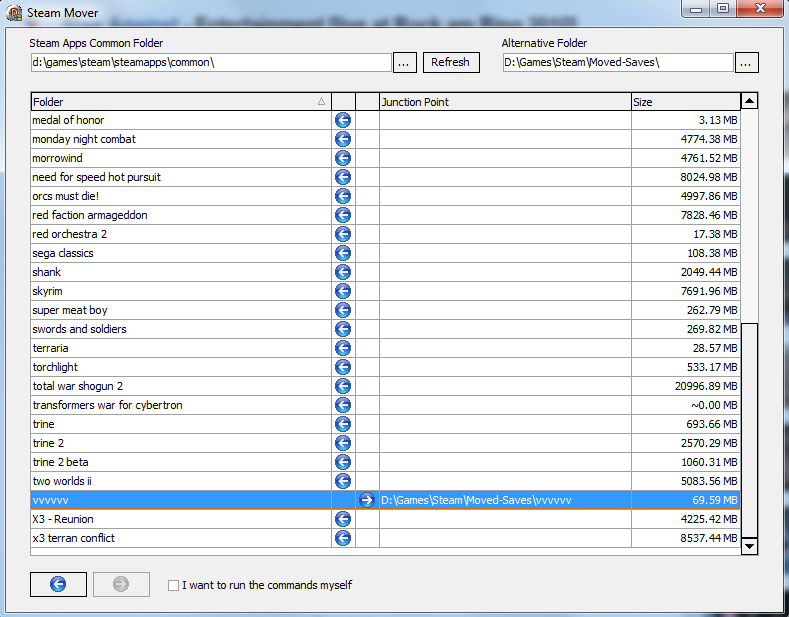 Don't judge me. I have an issue with never uninstalling things.

You have a 120GB SSD, 30GB of which is consumed by a large install of Windows, several GB used by core applications, leaving you with only 50GB or so for games. You want to run your favorite 3 - 4 games on your SSD while 'storing' the rest on your HDD. Why not just uninstall the unused ones? Well, if you decide you don't want to re-download a game all day and night, it's useful to have it ready-to-play on a different drive. All you have to do is move it back.

Here's how to move your files around.

As always, questions are more than welcome below if you have issues.