Cut PC Energy Consumption in Half with Hibernate

Disabling the predefined Windows power saving features is one of the first things we do when preparing systems for exhaustive benchmarking (a process we detailed extensively here), and I'd imagine that many users -- likely annoyed by the low default sleep times -- do the same. As the tendency to leave gaming rigs online 24/7 for months at a time increases, power bills, wasted energy, and hardware degradation also increase significantly.

Aside from increasing the lifespan of your gaming PC, utilizing sleep states (most notably, S3 - Sleep, and S4 - Hibernate) is an easy and convenient way to cut-down on your electrical bill and carbon footprint. Depending on the drive and hardware used, booting from sleep often takes a matter of seconds (less than 10 in all cases of gaming rigs we've tested) and booting from hibernate is only slightly longer.

What's the Difference? Hibernate vs. Sleep

ACPI (Advanced Configuration Power Interface) specifications make for fairly standardized power management and utilization - Microsoft and Windows have already made efforts to supply sufficient power saving options to its userbase - the only following step is to ensure usage.

S3 (above) is the prepackaged version of sleep/standby that is most accessible in standard Windows 7 installations. Putting a system into the S3 power state will disable all non-vital components of the system until prompted by the user to be kicked back into use; the RAM will remain actively powered to contain the user's session when the system was placed into the S3 state and low power may be provided to other components, but the most notable differentiation between S3 and S4 is S3's desire to maintain power to the RAM and keep the session alive. Any hard drives, video cards, or expansion / optical drives will be disabled entirely (or almost entirely) during S3; power to the CPU will also often be diminished or non-existent.

Instead of powering the video card and all these other components (often including fans) when a system is not being used, sleep modes ensure that a very low amount of wattage is being constantly supplied to keep the memory 'alive.' RAM uses an insignificant amount of power (mainstream memory averages a few watts per stick) and, in comparison to the entire system constantly running, can be the difference of several hundred watts.

Unlike sleep and standby modes, hibernate requires a large amount of non-volatile storage (often 75% of the total RAM in the system) to contain the session on a hard disk or solid-state drive; this is because even the RAM is powered-down during hibernation, minimizing the power usage (to almost 0) while still maintaining the convenience of active session storage. Hibernate normally takes a bit longer to boot from, but is almost always less than 1 minute if on a fairly healthy system. Normally even less than that, depending on hard-drive specifications and system health.

How does Sleep (S3) work in Windows?

As above, setting a computer into the S3 sleep-state will disable nearly all components (with the exception of RAM or other components considered vital to the specific system). The RAM maintains the active session -- right down to the mouse pointer's current location -- and awaits instruction from the CPU that the system is being awoken, at which point the session is restored and the user is where they left off.

How does Hibernate (S4) work in Windows?

Hibernate, primarily intended for laptop and mobile device usage, is a sleep state with better overall power preservation and even longer states of disuse. Putting a Windows-driven computer into hibernate mode will write all of its volatile memory to non-volatile storage space, upon which point the hardware is powered-down and the system is effectively 'off.' Re-activating the machine (normally awoken by pressing a key or the power switch), the last user session is restored from the non-volatile storage and all components spin back up.

This is the most power efficient way to temporarily deactivate a machine without completely shutting it down. Hibernation does come with a set-back, though, as its utilization requires significant free storage space.

What is "Hybrid Sleep?"

Hybrid Sleep acts as an amalgamation of sleep and hibernate, with the primary and noteworthy difference is its ability to restore the user's previous session even after power has been completely cut from the system, but it can also resume with the relative speed of S3. Hybrid Sleep is preferential for desktop use.

How much energy does Sleep or Hibernate save/use?

The simple answer to the above is: Almost none. Use a power monitor when the system is on and in an idle state (i.e. programs are opened but nothing substantial - like a game or rendering utility - is currently active) to tell how much power is consumed when it's left on all day. That's how much you're saving by hibernating. To give an idea, my system -- a 1st Gen Core i7-powered rig with a GTX 580, 4xHDDs, 1xSSD, several fans, cold cathodes, and other standard components -- reads out at right around 430W in its average "walk away from the computer and leave it alone" state. Before researching for this article, I left this system on for months at a time, only rebooting when due to software updates, hardware changes, or failures and power surges. It has had almost 100% uptime for several months.

How much money does Sleep or Hibernate save?

Continuing to use my high-end gaming system as an example, 430W at 24 hours a day came out to around 10.32kWh (kilowatt-hours) used for one day, or just below $1 in electricity, where I live. Let's say I have the system hibernate or sleep for 12 hours of the day, leaving it on for the other 12 hours. My power consumption drops by half, putting me at around ~5.16kWh for the day (or 12 hours of usage), which halves my energy bill for that day. Sure, it's something like $0.45 in savings, but that adds up fast (grab a kWh calculator here). Not to mention the positive impact on the environment from lower power consumption.

One year of near-constant uptime for a gaming rig of similar or equivalent specifications to mine would cost its owner at least a few hundred bucks. This all varies based on kWh pricing where you live (the average US resident spends around 11 cents per kWh). Let's make that number 10 for easy crunching (substitute this with whatever your costs are). 430W for 24 hours a day at 365 days a year comes out to around $377 spent on that one PC. Keep in mind that this 430W spec is quite high as it is a high-end gaming desktop, but many of our readers are on similar hardware.

Not sure what your power usage is? You can use a PSU calculator to get a rough estimate, just set its System Load level to be something low (50% or so should do) and make an educated guess.

How to Enable Hibernation in Windows 7

Windows' Hibernate setting requires a significant chunk of free storage space on your C:\ drive for activation, so as long as that requirement can be fulfilled, the fastest way to enable hibernate is to follow these steps:

This will enable hybrid sleep and restore the hiberfil.sys file, in the event it's been deleted. You'll also need to follow these steps to fully enable hibernate:

Windows' power options section of the control panel offers sufficient power saving avenues for the purposes of this article, although third party software could certainly be found. The default Windows power plans are composed of power saver, balanced, and high performance preset power definitions. Customizing one of these plans to your liking can help optimize performance while still keeping an eye out for the energy bill and planet's future; let's create a new power plan and tweak its settings. My below settings will assume the target user is a gamer who often leaves peripherals alone for minutes at a time while watching replays or wasting time on YouTube, but feel free to change them for your own uses. 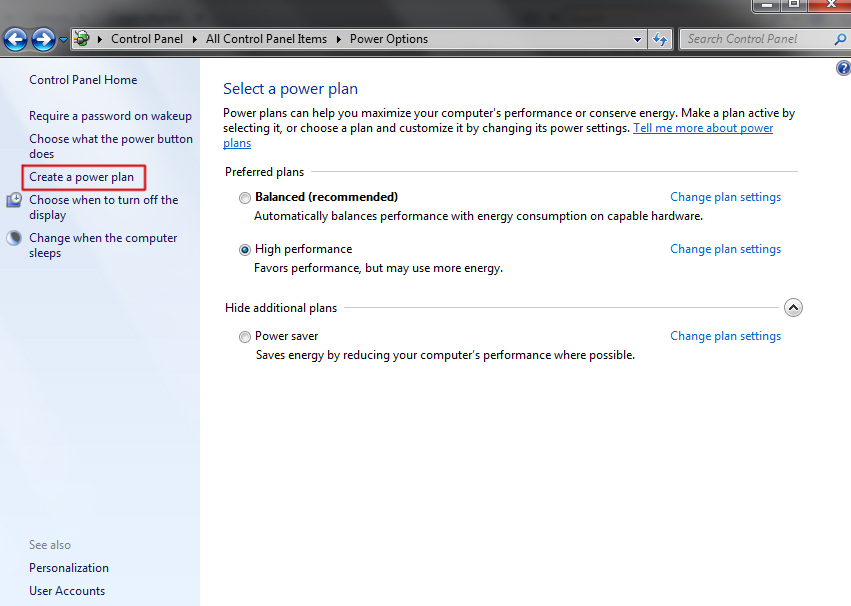 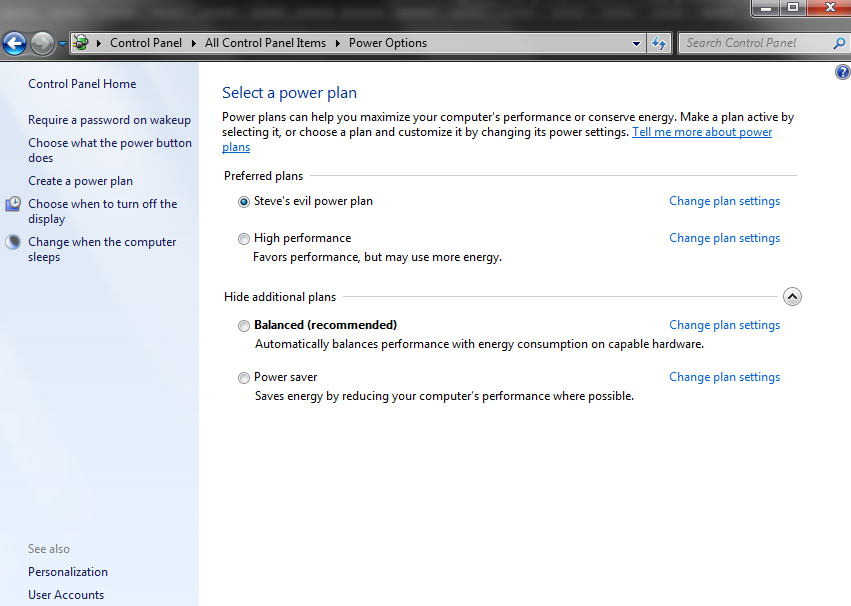 Configure as it pleases you; consider the following settings:

These should be a great starting point for most gamers, but again, don't hesitate to tweak. I'd advise using something along these lines for a day or two; if you feel like it sleeps too frequently, up the numbers to better fit your usage cycles. Don't forget that manually initiating a sleep or hibernate state is also always an option if you know you'll be leaving for a while.

Laziness is a great thing to break up society's demand for impossibly-high productivity expectations and computers are enablers; enabling S3 and S4 states takes seconds and has a profound impact on the utilities bill, the environment, and the health of your system. Remember, every hour those fan bearings generate heat or the hard drive spins (or even if the SSD is "wasting" P/E cycles semi-idly on pagefiles and caching) is an hour that could be put off 'til later with proper power saving states. Optimize the power saving settings of your home systems and work systems -- don't go crazy (or do) -- but save everyone a bit of money, increase system longevity, and help the green effort.