In 2013, fans watched roughly 2.4 billion hours of competitive gaming, nearly twice as many as in 2012. This number is anticipated to grow as high as 6.6 billion in 2018, as predicted by market research group IHS.

In the west, we’ve gotten used to watching eSports through online sites like YouTube, DailyMotion, and of course Twitch, but we’re not the only viewers. In the first and third largest viewers of eSports, China and Korea, nearly one-third of all eSports viewing was done through traditional television outlets. In fact, the skew towards televised competitive gaming in the East was so strong that it wasn’t surpassed by online viewing until 2013, where online viewing made up 70% of all eSports viewership. 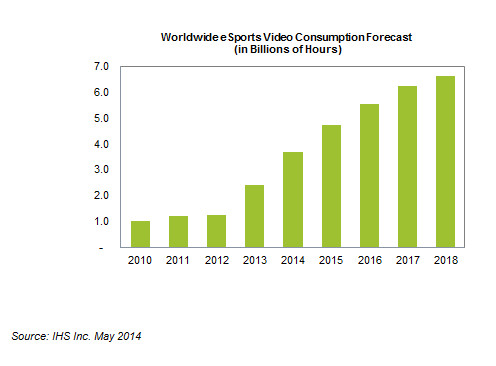 The report notes that League of Legends, DOTA 2, and StarCraft 2 are the largest titles presently watched; this hasn’t changed in at least a year now, so it’s not much surprise. Counter-Strike: GO has seen eSports viewership growth over the past few months as FPS titles have grown in popularity on the PC.

The full report can be accessed here: https://technology.ihs.com/502419/soaring-esports-viewership-driven-by-online-video-platforms.