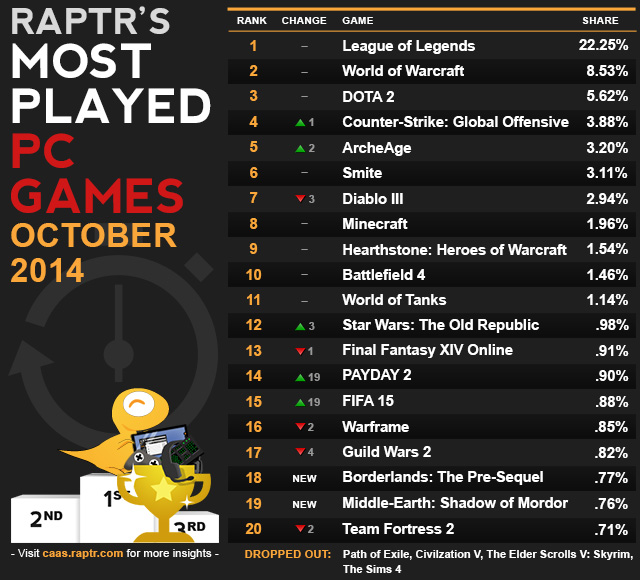 PAYDAY 2 benefitted from an October event that offered new missions daily and a tempting promotion that allowed gamers to play as Keanu Reeves’ character from John Wick.

Though Blizzard just released its Warlords of Draenor expansion for World of Warcraft this November 13, they were still able to entice players to keep coming back and logging more time. WoW’s Iron Tide patch and other in-game sales helped boost game time 16.32 percent. World of Warcraft is now 10 years old.

Bioware’s Star Wars: The Old Republic (12) rose three spots, the most for any game that remained on the list from September.

Borderlands: the Pre-Sequel, a title we found unbalanced and repetitive, debuted on the list at #18. Just behind it was Monolith’s open-world action game, Middle-earth: Shadow of Mordor -- a title we enjoyed very much.

Skyrim, The Sims 4, Path of Exile, and Civilization V dropped out of the top 20.

Note from Raptr: The “Share” number by each game represents that title’s gameplay time as a percentage of the total time spent on all the PC games played by Raptr members, and is useful for comparing the relative amount of playtime between particular games.

We’d love to hear what games from November you think will make their way on this list next month. Let us know by typing in a comment below!