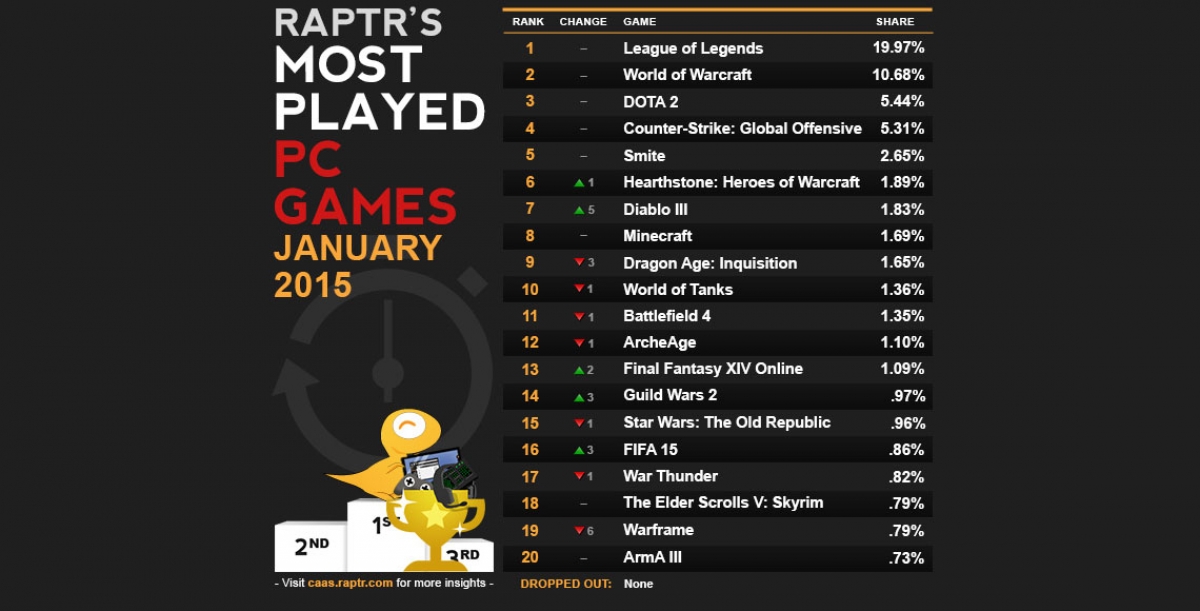 Raptr has once again released their list of most played games for January. This month the names are unchanged, but their numbers certainly aren’t.

Valve games DOTA 2 and Counter-Strike: Global Offensive managed to snag a bit more play time last month, with DOTA 2 up 23.18% and CS:GO up 37.23%. This is likely due to various updates to items and maps throughout the month of January.

Despite World of Warcraft ending 2014 with strong numbers, it has lost 5.28% of playtime in the last month. The temporary increase was likely due to its Draenor expansion.

Smite has remained largely unchanged, with play time only up 1.00%, even though a new god was recently released.

Hearthstone managed to achieve a 23.73% play time increase, which allowed it to jump up a spot for the month of January, to end up in 6th.

Diablo III is one of the games that has done best in the month of January. It saw an increase of 77.27% in play time, moving up five spots to 7th. The 2.1.2 patch in January featured major updates to classes & items, the addition of Season Legendary Items, and more, which is the most likely reason for the bump in play time for Diablo III.

Despite World of Tanks, Battlefield 4, and ArcheAge gaining play time last month, all three went down a rank due to Diablo III’s rise.

Warframe has had a significant blow to its play time, with a 17.89% loss. Due to this, Warframe dropped six places to land in 19th. This is all despite the addition of a new mini-game, weapons, and skins.

Note: The Share number by each game represents that title’s gameplay time as a percentage of the total time spent on all the PC games played by Raptr members, and is useful for comparing the relative amount of play time between particular games.