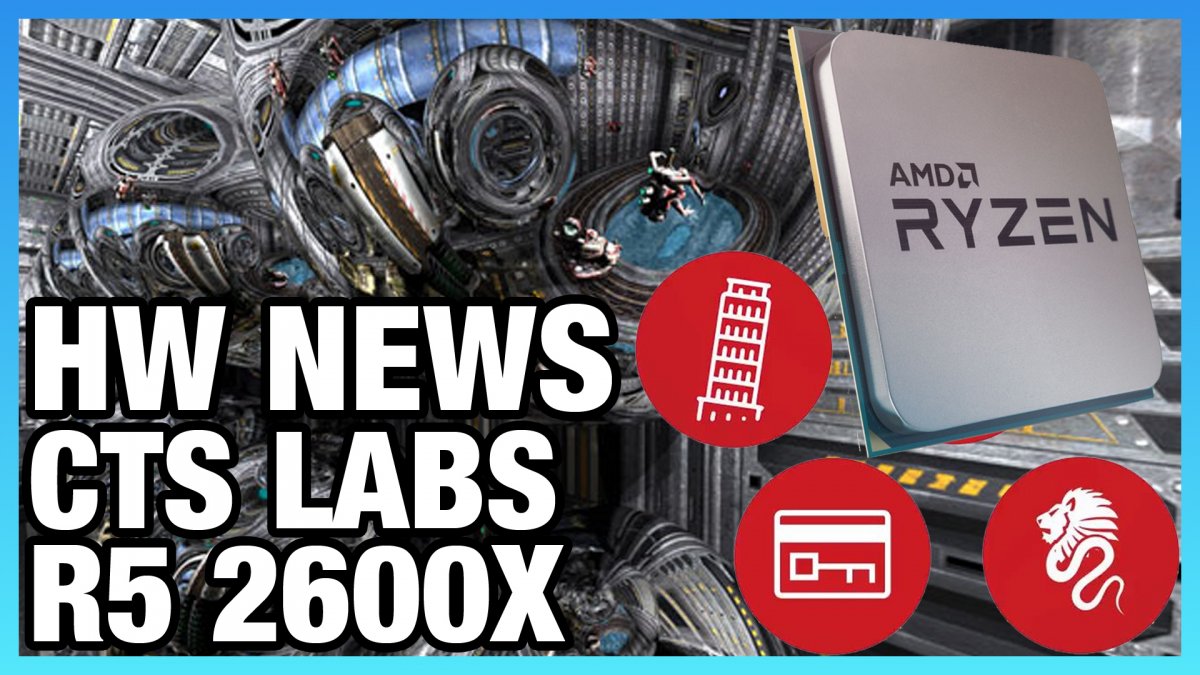 We have a brief update on CTS Labs and the presentation of their security research, which alleged severe flaws in the AMD Zen architecture. These findings gave way, moments after publication, to a 30-page tirade from Viceroy Research, a company that makes its living off of shorting stocks. The silence was deafening as we waited for official responses from CTS Labs on our pressing inquiries last week. Thus far, the company has skirted direct answers to our questions.

We asked the questions shown on screen now of CTS Labs.

We are still waiting for clarity on this. Some digging revealed an SEC document that lists Yaron Luk-Zilberman as President of NineWells Capital as recently as March 8, 2018, just days before CTS Labs released its exploit list. We can’t make links at this time, but we have asked for clarity on this point. Luk-Zilberman was also listed on the CTS-Labs website as a Managing Director of NineWells Capital.

Regarding Viceroy, we asked this question: “What is CTS Labs' affiliation with Viceroy Research? Did Viceroy commission CTS Labs for this report? Have the two companies had any previous connections or affiliation?”

The response was as follows: “"Viceroy is not a client of CTS. We did not send Viceroy our report. For any additional questions, please ask Viceroy."

Unfortunately, this response side-steps half the other questions -- like our question about the affiliation between Viceroy Research and CTS Labs. There is some affiliation, even if unofficial or distant. Viceroy Research is on-record with Reuters stating that they received the CTS Labs research document prior to launch, via leak, and took a “sizeable short” on AMD as a result. Given the small size of CTS Labs, it’s interesting that a leak would happen to such a specific firm.

We also asked the following: “Does CTS Labs, or do any of its employees, currently hold a position on AMD in the stock market?”

CTS Labs did not respond to this question.

Given the avoidance of answering our hardest questions, and the skirting answers to our few that were addressed, we remain skeptical of the motives of CTS Labs. Even though the exploits are rooted in legitimacy, we question the motive and mode of publication. A lot of the defenses to media have been that CTS Labs is new, and therefore didn’t know what they were doing. Their entire company background page talks about how they each have a decade of experience in security. That’s some dichotomy.

A listing on Amazon Germany accidentally revealed the price and release date of the AMD R5 2600X. The processor was priced at 248.93€ with tax (just over $300) and was scheduled to become available for purchase on April 19th. Some extremely basic specs were also revealed on the product page: frequency is 3.6GHz base and 4.25GHz max turbo boost, and it’s based on a 12nm process.

About a week or two prior to the CTS story taking the news cycle by force, we spoke with Intel about security updates across the past five years of Intel CPUs. These pertain to Meltdown and Spectre, and should harden security without sacrificing too much performance.

Our present understanding is that CPUs from the 6th generation onward will experience the least performance impact, often single-digit percentages, as they’ve had the most optimization work thus far. Older generation systems will experience heavier performance impact, sometimes falling to a relative performance of 88% -- or 76% in responsiveness, as measured by SysMark -- versus baseline. Note also that Intel has measured more significant relative performance loss with older systems coupled with SSDs than with HDDs, largely a result of bottlenecking on storage with hard drives as primary storage.

For gaming performance, it looks as if the newest microcode updates should generally have minimal impact on gaming -- as we’ve previously measured with Microsoft’s Windows updates -- but there’s more to lose in responsiveness or workstation applications.

NVIDIA’s been talking about real-time ray-tracing since we got into the hardware industry, and they have another substantial announcement on the advancement of the technology. The company announced its new NVIDIA RTX at  GDC, which is a ray-tracing technology for game engines. RTX was demonstrated running on Volta architecture GPUs, and integrates primarily with a new Microsoft DirectX Raytracing API; alternatively, or in addition to this, RTX can be accessed via GameWorks libraries. NVIDIA announced that 4A Games, Epic, Remedy Entertainment, and Unity have begun working with RTX.

A picture of an ASUS ROG X470-F Strix motherboard was sent anonymously to videocardz.com. Techpowerup translates the Chinese characters between the CPU socket and memory slot as “Players,” indicating that it’s a gaming motherboard (if the VRM heatsinks and I/O cover didn’t already tip you off). No explanation was offered for the word “Hybrid” or the other characters on the board.

This is now one of six known ASUS X470 boards. The others, listed by videocardz, are: Prime X470-PRO, ROG Strix X470-I Gaming, ROG Crosshair VII Hero (standard and WI-FI variants), and the TUF X470-Plus Gaming.

This one is a quick story: Motherboard manufacturer ASRock has officially confirmed that it will begin manufacturing video cards. The cards will exclusively host Radeon GPUs for the time being, and seem to be branded under a new “Phantom Gaming” brand. We don’t know much more than that at this time, other than ASRock’s proclamation that the cards will be “mysterious” and “unpredictable” -- mysterious in price and unpredictable in availability, assuming they follow the rest of the market.

Either way, we welcome more vendors to graphics card production. There’s not much more to know right now.

Specs have leaked for a mining-specific GPU from NVIDIA. The GP102-100 is based on the GP102 chip used in 1080Tis and Titan Xps, but with limited non-mining-specific features. The P102-100 is the source of the leak, an I/O-less mining card from Inno3D that claims a hash rate of ~47MHS for Ethereum, ~660 Sol/s for Zcash, and ~879 H/s for Monero. Notably, it uses just 5GB of memory and PCIe x4, as extra memory and lanes are irrelevant to some mining algorithms. The card runs at 1582MHz (base), has 3200 CUDA cores, 11Gbps GDDR5X memory, 400GB/s memory bandwidth, and a 320-bit memory interface.

Samsung’s massive Pyeongtaek fab--which we mentioned in Hardware News a couple weeks ago in the context of a second fab opening--experienced a 30 minute power outage on March 9th. Reports have since come out stating that 60,000 wafers were damaged due to the outage, which translates to 3.5% of global NAND wafer production, according to Tomshardware. We’ve been keeping track of NAND prices on DRAMExchange, but they don’t appear to have been strongly affected, at least not yet.

Half hour power outage kills 3.5% of global flash for march

Logitech G has announced the G560 gaming speaker and G513 mechanical keyboard, both with “Logitech G Lightsync” to synchronize RGB LEDs to gameplay. Logitech says both are intended to complement the popular G502 gaming mouse.

We’re most interested in the G513 keyboard, which will offer a choice of Romer-G Tactile and Romer-G Linear switches. The new Linear switches are said to be similar to Cherry Reds, but unlike Cherry switches Romer-Gs are designed to not let light spill out of the sides of the stems. According to Logitech: “The switches actuate up to 25 percent faster than the leading competitor at a distance of 1.5mm, combined with a low-force 45g actuation.” An optional memory-foam palm rest is included.

Both will be available in April. MSRP is $200 for the speakers and $150 for the keyboard

SteelSeries seems to be trotting out a new line of flagship gaming headsets in the new Arctic Pro Series. The new headsets are largely similar to one another in aesthetics, and use premium flourishes like steel and aluminum, but deviate slightly in configuration. In total, the new lineup is comprised of three models -- the Arctis Pro, Acrtis Pro + GameDAC, and the Arctis Pro Wireless.

The Arctis Pro sits at the bottom rung, and is your classic PC headset, offering USB connectivity and RGB lighting via SteelSeries’ Prism lighting system. Secondly, The Arctis Pro + GamDAC uses an onboard sound card certified for Hi-Res audio, and offers RGB lighting as well. Finally, the Arctis Pro + Wireless is a wireless headset, capable of of transmission using either 2.4 Ghz wireless, or bluetooth. This particular model is bereft of RGB lighting, and comes with a base station that doubles as a battery charger.

Corsair appears to be continuing its revival of one of their most popular case series. After the recent launch of the 500D, Corsair’s newest member appears to be the Obsidian 1000D, ostensibly a successor to the 900D. The new monolithic case will be a super tower, capable of housing two separately derived systems. Leaked specs include support for 2x 480mm radiators, 1x 420mm radiator, 1x 240mm radiator, 8x 120mm fans (front), 2x 120/140mm fans (rear), 3x 140mm fans (top), 6x 2.5” bays, 5x 3.5” bays, and integrated Commander Pro Lighting. The styling of the case employs aluminum, steel, and curved tempered glass on hinges, much like the new 500D.