Analysts at Trendforce continue to aggressively adjust expectations for memory pricing for the last quarter of this year and into 2019. Trendforce is typically accurate in its price calculations.

DRAM prices could lower as much as 20% YoY in 2019 due to weak prices and a growing over-supply. Also affecting this is the slow smartphone shipments and sluggish notebook shipments, the latter of which is mostly due to the shortage of Intel 14nm CPUs. This would effectively kill the lucrative growth cycle that has been going for nine consecutive quarters in the memory world.

NAND is also expected to see a 25-30% priced decline in 2019, mostly resulting from increased production capacity from manufactures. If you haven’t looked recently, take a look at some of our SSD sale links in the description below. We just bought five SSDs for test systems because pricing is lower than ever, now down to around $55 for a Samsung 250GB 860 EVO, or about $150 for a 1TB SSD that’s suitable as a game drive. It seems that there is finally some price relief in the memory segment.

NVIDIA recently published specifications for a new GTX 1060, indicating a move to GDDR5X for the now-fourth SKU of the same-name card. The GTX 1060 6GB card now comes in two flavors: 8Gbps GDDR5 and TBD GDDR5X, with the GDDR5 option likely being phased-out soon. If you had forgotten, there was also a 9Gbps GDDR5 GTX 1060, but performance was largely within margin of error versus the 8Gbps model. There’s also still the 3GB GDDR5 version of the GTX 1060, for what that’s worth.

NVIDIA isn’t the only one rehashing the same product for the fourth time. AMD is now silently releasing an RX 580 with 2048 streaming processors, which is actually equivalent to an RX 570’s FPU count. The RX 570 is a 2048 FPU GPU with a reference boost frequency of 1244MHz. The RX 580 2048 SP is the same thing, except its boost frequency is 40MHz higher. In other words, it’s literally an RX 570 with a different name. AMD and NVIDIA have both done things like this before, but the frequency with which we see these re-re-refreshes seems to be accelerating as new processes and architecture decelerate.

The collective tech space of the internet was abuzz last week due to controversial benchmarks published by Principled Technologies showing Intel’s i9-9900K in an overly-favorable light against AMD’s Ryzen competition. It quickly became clear that Principled Technologies had not equalized testing methodology for fair and objective testing.

The AMD camp responded in kind with their own “best practices” for benchmarking Ryzen. AMD’s complaints mostly echoed the ones of media and enthusiasts -- questionable memory configurations, uncontrolled thermal testing, unclear settings for C-states and Multicore Enhancement among various, unaddressed motherboard settings. They also released this information on the same day Intel lifted their embargo for 9th gen reviews, and likely not by accident. 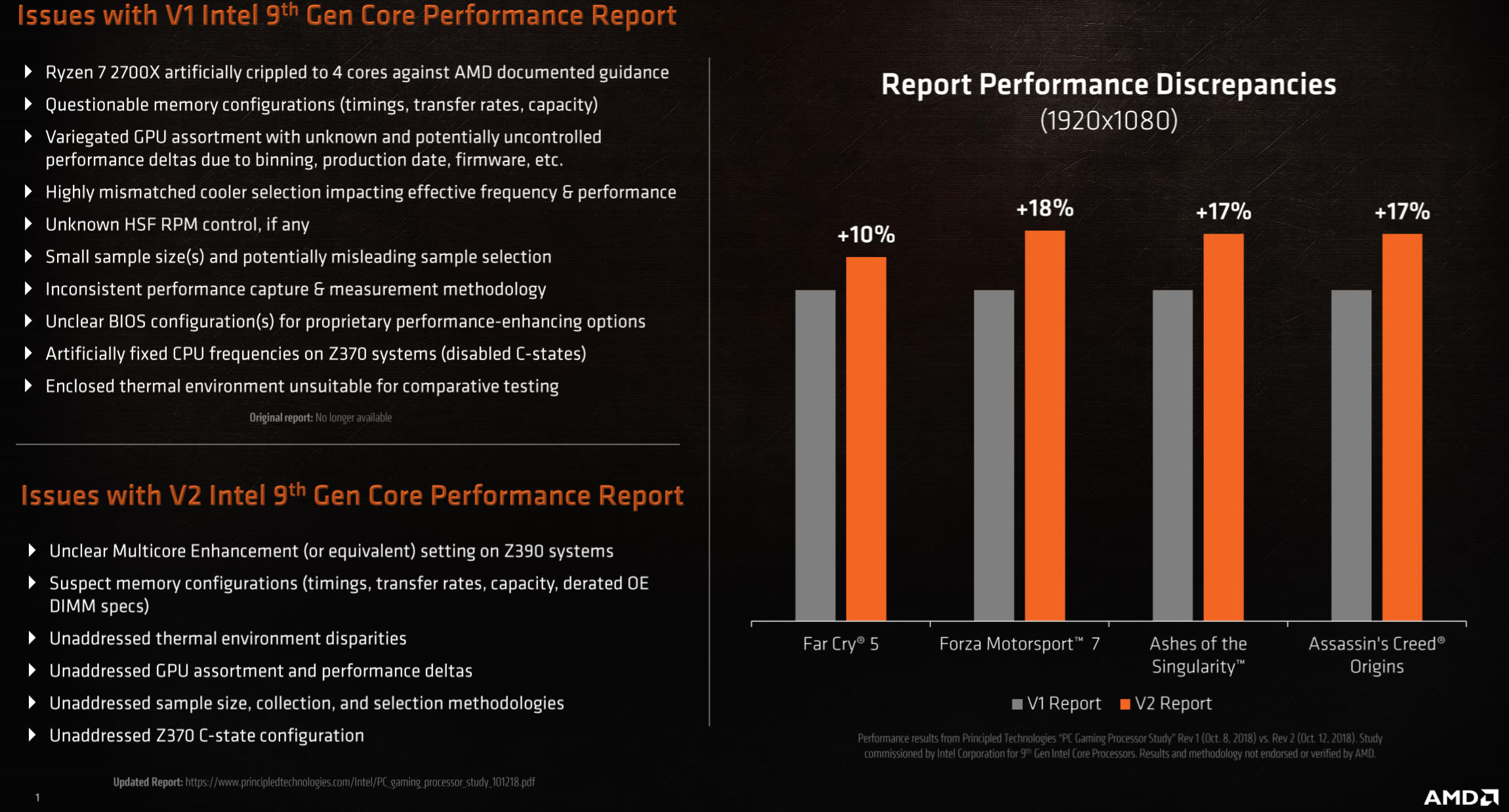 Chinese publication PConline interviewed MSI, and dug into topics like the US-China tariff war, and the RTX 20-Series graphics cards.

PConline inquired as to whether recent tariffs will impact manufacturing costs for CPUs and GPUs in an adverse way. Liao Wei, Deputy General Manager of MSI Global Multimedia Business Unit, stated that he believed the prices for Nvidia’s RTX 20-series cards will remain consistent, as the majority of the cards are constructed outside of China.

Speaking to availability, Wei stated that shipments on RTX cards were tight, mostly due to production challenges; the Turing die is significantly larger and more complicated, and TSMC has reportedly had yield issues. Additionally, all of the RTX cards use well over 2,000 components to produce, compared to the GTX 1080 Ti’s 1,600.

Silicon Lottery, the famed website known for binning chips and offering delid services,  released their history of binning success, dating back to Devil’s Canyon. These statistics are especially illuminating if you’re looking to overclock a CPU on the list, as it contains voltage applied, instruction sets used during testing and what percentage of chips hit are able to obtain a certain frequency.

There are a couple caveats to the list. Intel’s Skylake-X, Kaby Lake and Coffee Lake CPUs were delidded, and many more CPUs were excluded from the list due to low sample size for testing.

Backblaze have released their latest quarterly report on HDD failures, with 97,600 monitored drives making up the data in the report. According to Backblaze, data growth is expected to continue unabated, with most of that data being stored in the cloud. The bulk of data is still expected to remain on spinning drives, so either density must continue to increase, or data centers must be built out.

3TB and 6TB drives are being supplanted by 12TB HDDs as manufacturers continue to up densities. Backblaze reports that the larger drives still have a very low AFR (Annualized Failure Rate) of 1.21%, while the overall failure rate for Q3 is 1.71%. This is the lowest ever achieved by the company.

To check out rates for specific models and manufactures, check out the report.

For this week, our primary sales of note are the SSDs linked earlier: The 860 EVO 250GB and 860 EVO 1TB are both good considerations. The RX 570 (Newegg) has also been returned to normalcy in its pricing.