Using a sample size of several hundred purchases from our audience, we can plot this chart to look at popularity of cards between the 10- and 20-series. Note that, again, this isn’t a perfectly representative distribution. Most of our referred sales are in the US market, which will favor US market conditions. Also, although several hundred samples is a good amount, it’s not fully representative. 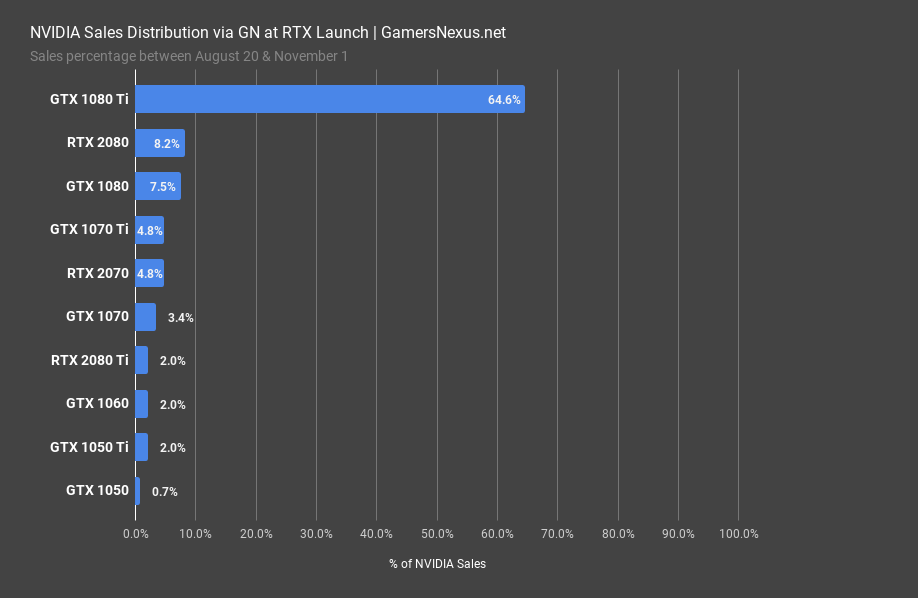 This chart shows sales between the dates of August 20th and November 1st. August 20th is the day that the RTX 20-series was announced and put on pre-order, so we’re not starting our data collection until the RTX series was made available. We can see that the GTX 1080 Ti distribution holds a significant lead at 65% of all sales to GN viewers. The next closest card is the RTX 2080 at 8%, which is followed by the GTX 1080 at 7.5% and GTX 1070 Ti at nearing 5%. The 1070 Ti and 2070 are roughly equal. 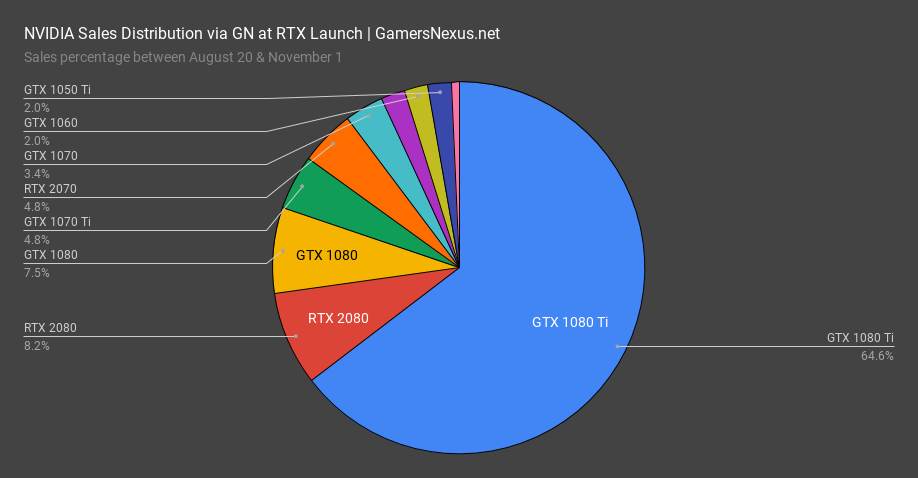 Just to help visualize total market distribution, here’s a pie chart for each device. The GTX 1080 Ti has been an immensely popular card, and NVIDIA deserves tremendous credit for making something that has held relevance even through now. The 2080 performs about the same as the 1080 Ti, telling us that our audience has favored high-end GPU purchases over the last few months.

So far, all this tells us is that 1080 Ti sales far-and-away exceeded everything else, but it doesn’t tell us if there began a switch-over upon launch. We can use an over-time chart for that:

This is plotting only the GTX 1080 Ti for GTX and is not taking account of all the other GTX cards. All RTX cards are plotted under one banner. Overall, sales for our audience were slow, and people largely stopped buying GPUs leading up to the review embargo lift. The highest amount of RTX sales happened on day 1 of this plot, where the cards were announced, but not yet reviewed. Again, remember that this data is inherently biased toward our audience: We told people to hold purchases and wait to see our review, and it looks like the purchase trends followed that. This will bias the data toward either no purchases or GTX purchases, so keep that in mind. Different audiences may have swung the other way.

On date of review embargo lift, there’s a massive spike in total NVIDIA sales for the GTX 1080 Ti. These percentages are based off of all GTX and RTX sales, not just the 1080 Ti and RTX, so this spike is substantial. Our review of the RTX 2080 came first and noted that it was not worth buying when compared to the GTX 1080 Ti, which seems to align with the embargo lift day data that only GTX sold. Our 2080 Ti review was next and noted that the 2080 Ti is objectively good, it’s just expensive. Compared even to the RTX 2080, very few 2080 Tis moved. This is likely due to the price.

From this point on, most sales were GTX, numbering in the hundreds for all Pascal cards combined.

We also don’t yet know if this is standard behavior for a new architecture launch and unfortunately, our readership was small when the GTX 1080 launched. We still have enough data to make a basic chart, but we’re working off of fewer samples. 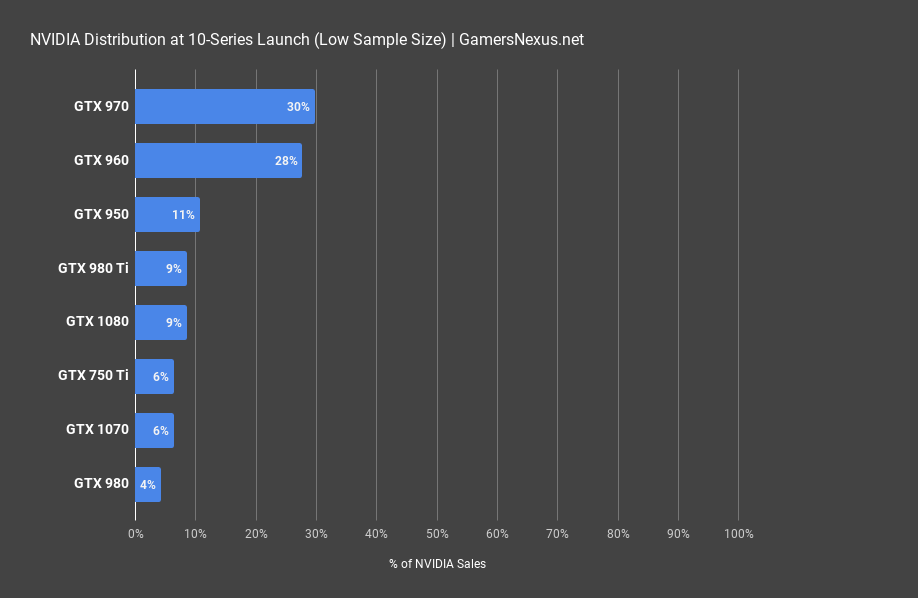 In this chart, you’re looking at the Pascal launch for the GTX 1080 and 1070 as compared to the 900-series. We saw similar behavior, with 900-series cards more popular for our audience of 2016. That said, sample size is under 100 units, so we really can’t draw any conclusions here. The 10-series comprised a total of 12% of all sales logged for the GTX 10-series launch window, measured over the same time period as the RTX vs. GTX launch. The 970 remained the most popular card, true even today where it has been one of the best-selling cards of all time. 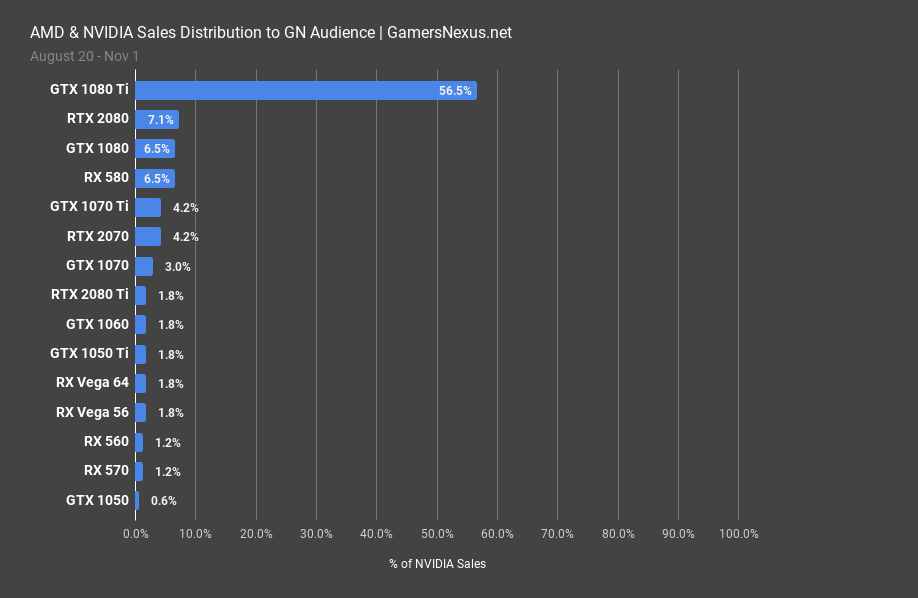 If you’re curious about AMD sales during these time periods, here’s a chart recalculated with those numbers.

AMD’s RX 580 shares the same popularity as the GTX 1080, and is a bit more popular than the 1070 Ti, 1070, and 2070 in this two-month window. Remember, this is just the window from when the RTX cards went on sale, so NVIDIA is driving the most marketing during this time. The Vega cards were at roughly 2% sales during this period.

We really have to emphasize just how crazy the 1080 Ti sales are during this window. It’s not like that year-round, but the timeline biases data toward the high-end, since most users were waiting to purchase RTX or the predecessor, and our audience seems to also be largely enthusiast-aligned.

We don’t have enough data from the Maxwell to Pascal switchover to really draw conclusions, unfortunately, as we were a much smaller outlet at the time (and had a limited sample size). We can draw one conclusion, at least, and it’s that the 1080 Ti is more popular than it’s ever been. Everyone has wanted one over the past few months. As inventory for the 1080 Ti dwindles, leftover would-be buyers will be forced to the RTX 2080 or (if spending a lot more) a 2080 Ti.