Venturing once again into the dark, dungeon-like halls of the Joystick Labs building in Durham, NC, I descended the stairs into a hallway lit primarily by the dim screens of laptops and monitors; in these halls stood some fifty-odd game developers and enthusiasts, each showcasing his or her respective work. This is where greatness comes to fruition. There was also free food.

The local IGDA chapter meeting housed some of our favorite indie developers, including the team behind Digitanks, and was headed up by Glen "Famine" Swan of FunCom (with whom we met at CGS 2011). Serving as a base of operations for exchanging notes and business cards, the IGDA chapter meetings are fueled by a rising level of interest in communities across the globe.

The International Game Developers Association (IGDA) is one of the most successful organizations currently aiming to aid game developers in the production process; the IGDA is divvied into location-specific chapters, each composed of local developers, students, and enthusiasts. There's no better way to break into the field than to go hang out with the guys behind the games in your area, and they're always eager to share tips and tricks with newcomers. 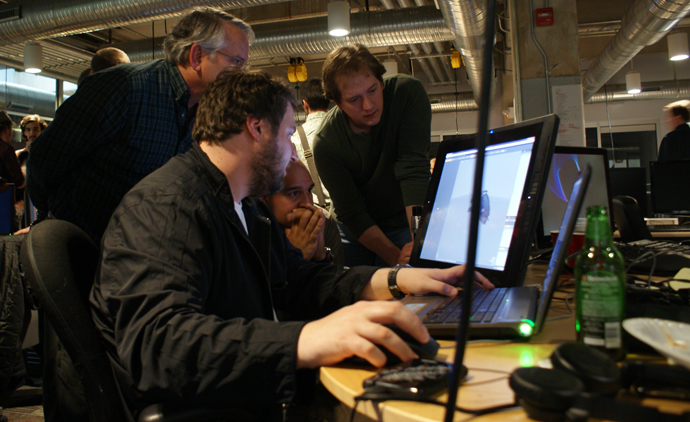 Each meeting often showcases projects that are being worked on within the chapter and tries to help members network with each other; the idea is that, thanks to the chapter meetings, the right connections can be made to make a difference in the competitive gaming industry. This meeting had some of the awesome games from the Global Game Jam on display (like Hubert's Safari Adventure and Weekend of Mass Destruction, each made in 48 hours) as well as some of the up-and-coming projects aided by Joystick Labs.

If you haven't been to a developers' meeting near you, it's definitely worth it. The opportunity to absorb information is unparalleled, you'll get honest opinions about your game, and the atmosphere is extraordinarily friendly; it's easy to make acquaintances and start up that project you've been kicking around for a year.

Check the IGDA page to see if local chapters exist near you, and if they don't, do what our friends at Lunar Giant Games are doing and create your own!