A look into how PCs will inevitably take control of the video gaming market, and how they currently rake in 42.5% of all global video game software sales.

Our review of 3D Vision PC gaming technology and our guide on how to build a $550 budget gaming PC have led us to understand that PC gaming's influence in the global video gaming market never waned, and -- in fact -- is growing, especially when the dichotomy between console and PC hardware is considered (believe it or not, GPUs will soon be 1000% more powerful than they currently are).

We recently examined data presented by DFC Intelligence to NVIDIA about global PC gaming software sales and found that PCs currently bring in an estimated 42.5%of total video game software revenue. That's right: almost half of all video game-related money goes solely toward PC video games, with the remainder getting apportioned between all major consoles (PS3, Xbox360, Wii, and so on).

The data collated by the neutral group DFC Intelligence (as shown in the above chart) may seem provide an overly-optimistic projection for future PC gain, but for now, focus entirely on this year's revenue -- as of 2011, PC video game sales are bringing in a calculated ~$17B, while all current-gen consoles combined nearly meet ~$23.5B, up from last year's PC and console revenue of $15.5B and $23B respectively, showing a greater growth trend for PC sales. Projections indicate that -- and yes, this does account for expected new emergences in the console arena -- at this rate, global PC video game revenue will surpass the rapidly stagnating console revenue in 2014 (which has proven to be erratic in its behavior, especially in 2008, 2009, and 2010). On the same note, PCs will make nearly 50% of all video game software revenue (meaning that, in essence, all major current-gen consoles will be split between the remaining 50%) around 2013. 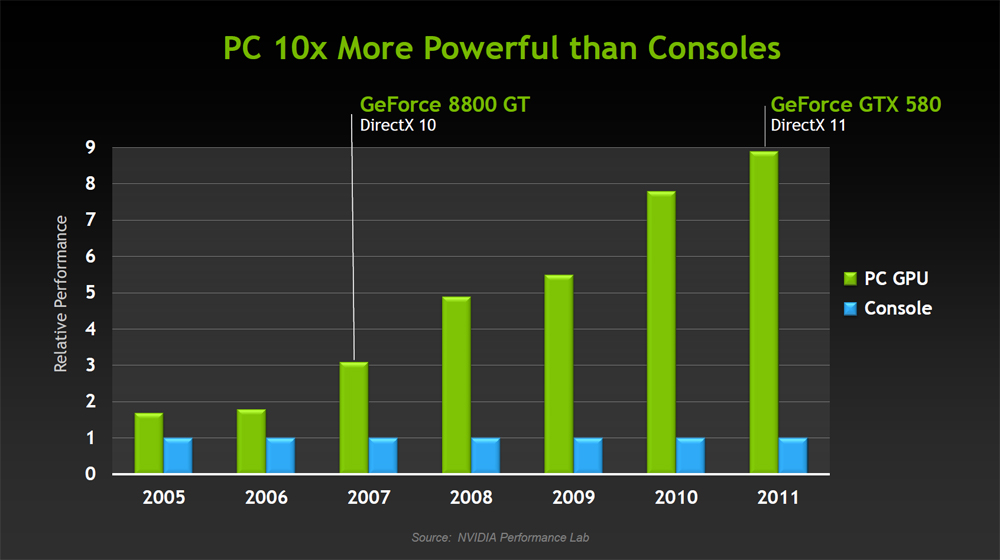 Let's break it down to its fundamental implications: as of now, the PC alone brings in more than every individual console, and nearly matches the revenue generated by all combined consoles. The key message, here? According to Tom "TAP" Peterson of NVIDIA, makers of powerful graphics processing technology utilized across multiple platforms, that message is simple: "PC gaming is not dead. That's a myth." DICE, the team behind the visual masterpiece that is Battlefield 3, seem to think equivalently: "PCs are way more powerful than consoles today. We're aiming to use the PC to set the bar."

How, then, does the PC maintain such a disproportionate amount of video game software market-share? According to NVIDIA, a lot of that has to do with the migration from traditional models of video game distribution toward a more open and free-play-based gaming economy: with games like League of Legends, which currently has an estimated 15 million players and has had prize pools as large as $5M, and World of Tanks, which went from 0 to 4 million players in only one year, PC gaming's ability to churn out high-quality video games at a base "starting investment" of $0 gives it the defensible high-ground against its console brethren. Peterson clarified what this meant for us: "this model represents growth in PC gaming," implying that as developers feel more pressured by the higher-quality games developed by competitors, they are forced to creatively devise new payment platforms. 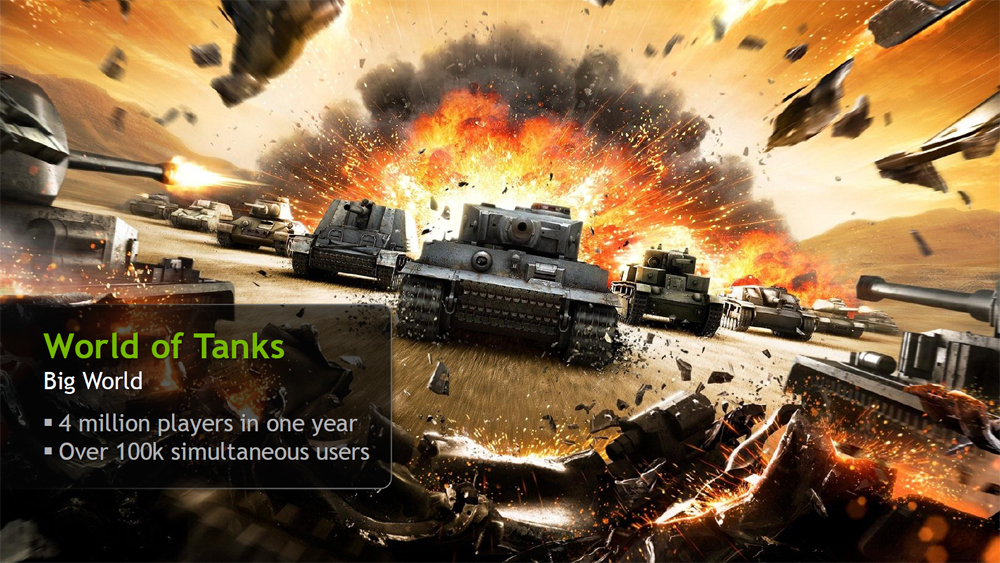 Similarly, the PC gaming e-sports scene has exploded lately (you can view all of our e-sports news here). Events like MLG Raleigh 2011, which had over 138,000 simultaneous stream viewers, have proven that games like StarCraft 2 and League of Legends have a natural ability to draw spectators in a culture that was previously stereotyped as being forever enslaved to the couch or armchair. The gladiatorial showmanship from big-name PC e-sports contenders has contributed massively to the PCs resurgence as the dominant platform, namely in its "viral marketability;" players like STBomber from StarCraft 2, who is now famous for his epic trolling of DRG, propel the sport toward a future that could never have been imagined by the pioneers of video gaming. PC games have the best spectation potential -- as demonstrated by StarCraft 2's takeover of the main stage event at MLG this year (previously owned by Halo) -- and as our friends over at DICE, Blizzard, and NVIDIA tell us, that's essential to the advancement of the PC as a viable market option for gamers. Peterson gave his spin on the eruption of e-sports spectating:

Another phenomenon that is happening is spectating: 20,000 live spectators and 30 million stream views at MLG Anaheim -- there's an audience to watch PC gaming that is being executed at a pro level. It's just like any real sport that has an audience: once you develop the technology that allows that model, it turns into a marketing platform. I think you're going to see more and more games that are built with an eye towards audience spectation.

When we break it down into real, hard-evidenced numbers, though, PC gaming has a hidden contributor that consoles simply do not have backing them: China. It's been made clear that China is on the road to a technological and economic boom, and due to import limitations and an overall lack of interest in consoles, Chinese gamers have dedicated themselves almost entirely to playing PC video games. "Consoles don't exist there, and it's because they're used to [free games] and import restrictions," Peterson told us, indicating the strong grasp that free-model and micro-transaction-based games have on the Chinese and Asian gaming market. China's sort of big, for those who haven't noticed, and as China expands and increases in its monetary allowance to spend on consumer electronics, so too will PC gaming glide on its trajectory toward the top of the global gaming market. 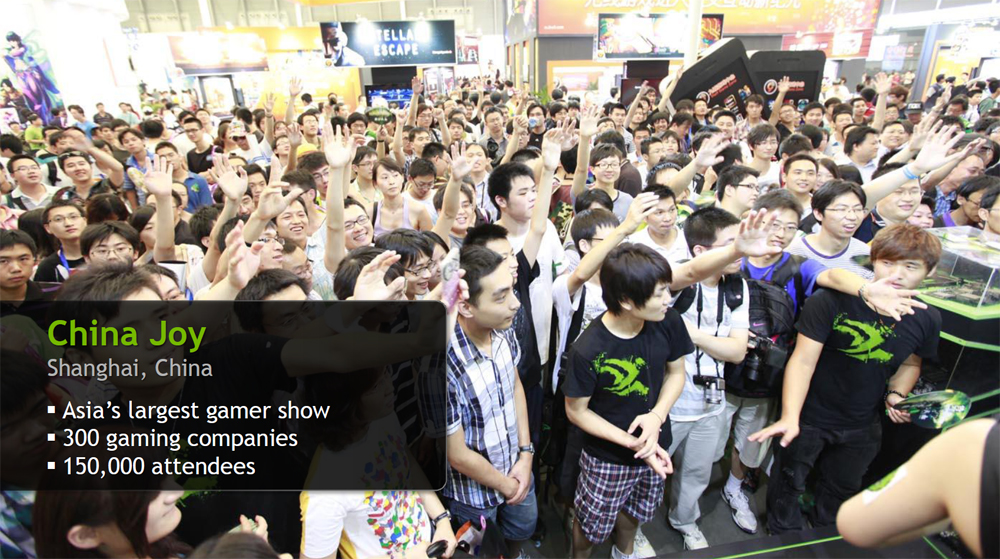 Nearly everyone depicted above is a PC gamer.

This isn't to say that you shouldn't play consoles, nor is it insinuating that consoles are failing (anything making upwards of $20B is fairly safe, don't fret). It boils down to something I tell people often: play what you want. If you like a particular platform or console, go play it; don't let anyone tell you differently. If it's fun for you, that's what matters. However, this should open the eyes of the naysayers and provide some insight as to the industry's phenomenal growth as a whole (console and PC gaming included). We're all gamers, here, and we're contributing to an industry that has now surpassed many other entertainment industries (motion picture and music included). Let's keep growing gaming, regardless of our individual and petty console discrepancies.