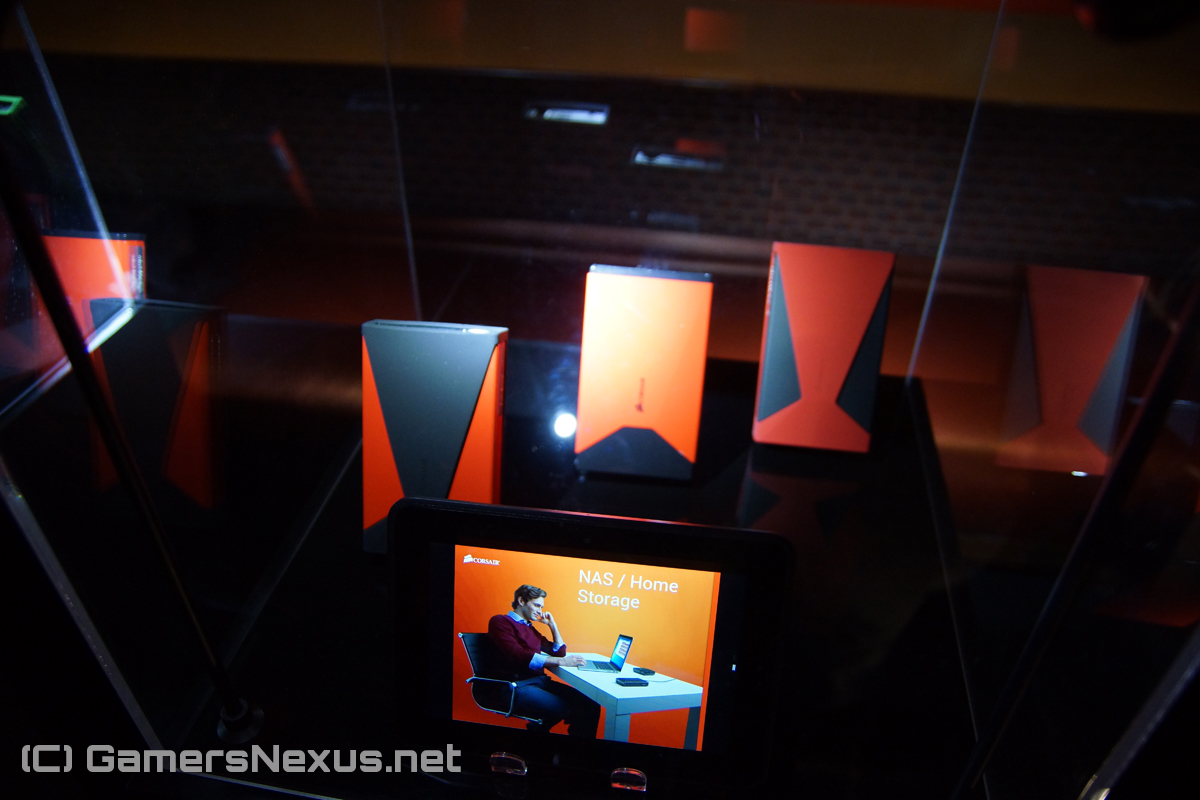 Corsair’s newest-announced line of products, wirelessly accessible portable storage, will take shape in the form of the Voyager Air, their first USB3.0 portable storage drive that also doubles as a NAS. As we did with the 900D, we had the chance to get some hands-on preview time with the Corsair Voyager Air – below is what we thought.

You could probably anticipate that it comes in the standard 500GB and 1TB sizes, and that it has USB 3.0 via a micro connector, gigabit ethernet via an RJ-45 port, and wifi for all the necessary connectivity. I wasn't at all moved by these features, as I’m sure many other avid portable media users won’t be.

I started to warm up to it when they mentioned that it has an erase lockout feature so people (read: children) don't accidentally delete entire libraries while connected to it. Useful. It runs on a pretty nifty custom Linux kernel, optimized to perform its specific functions (for all you non-Linux users out there, it uses the SAMBA protocol to make the Linux file system play nice with Windows FS). It has a nifty little app obtainable from the App Store, Amazon, or Play to help you fully manage the device. Check out the associated GN video to see this in action.

The company said in our meeting:

“[In terms of] what we think about USB drives and portable storage – the market is changing a little bit. We don’t make small USB devices anymore, let’s face it: who needs to move a few megabits of data around anymore? What we find is a need today of portable storage, really hinges around massive music libraries and HD Video content.

With that we come to the most important announcement of the evening. Portable storage devices: Voyager Air is the first portable wireless drive, network attached storage, usb drive, and wireless hub.”

One item of note is that it comes packaged with a car charger and home charger, so you won’t have to go online and buy another charger set. This accompanies its rechargeable 7-hour battery.

So far, we have a regular portable HDD with wifi, some cool software features and solid battery. What did catch my attention was what it can do with the wireless connectivity – the Voyager Air has a feature they call “wifi passthrough,” within which you can connect your Voyager Air to a wireless network and then connect devices through it to the internet. The maximum of five connected devices can then choose to either browse the web or watch videos that already exist on the Voyager Air, all streamed simultaneously. Corsair further reminded us that its wireless will allow consumers to connect their wireless storage device to TVs, laptops, PCs, game consoles, or BluRay players.

I could see the value in that. And they continued by presenting the idea that it could easily also be a gigabit wired NAS, if consistent connectivity is a concern. Pricing is $180 for 500GB and $220 for 1TB.

While this still fits in to the growing portable hard drive category, it is certainly the most feature rich one I've seen to date. One final note, keep in mind that we haven't actually tested this device, and that as you watch the video from Corsair, the speeds they quote are likely max sequential 120MB/s read and write. We'll wait for some hands on testing before making any final conclusions. Stay tuned.