With nearly all the major case manufacturers under belt at this point—specifically Corsair, NZXT, and Rosewill, Cooler Master, Zalman, and Lian Li (all four are pending publication)—it only made sense that we check in with SilverStone, who’ve maintained a reputation for quality since the company’s inception.

Checking out their booth in the LVH at CES 2013 was a refreshing change of pace; the cases were focused not on being large or over-simplified, but rather entirely geared toward performance. Entirely. This post offers first impressions on SilverStone’s gaming- and enthusiast-class cases, the Fortress FT-04, Raven RV-04, and Mammoth MM01; we also got to look at the new SUGO SG10 mATX enclosure, a few HTPC enclosures, and several other miscellaneous products. This post will heavily focus on the gaming options, but I’ll briefly touch on the NUC and HTPC options in a forthcoming post. 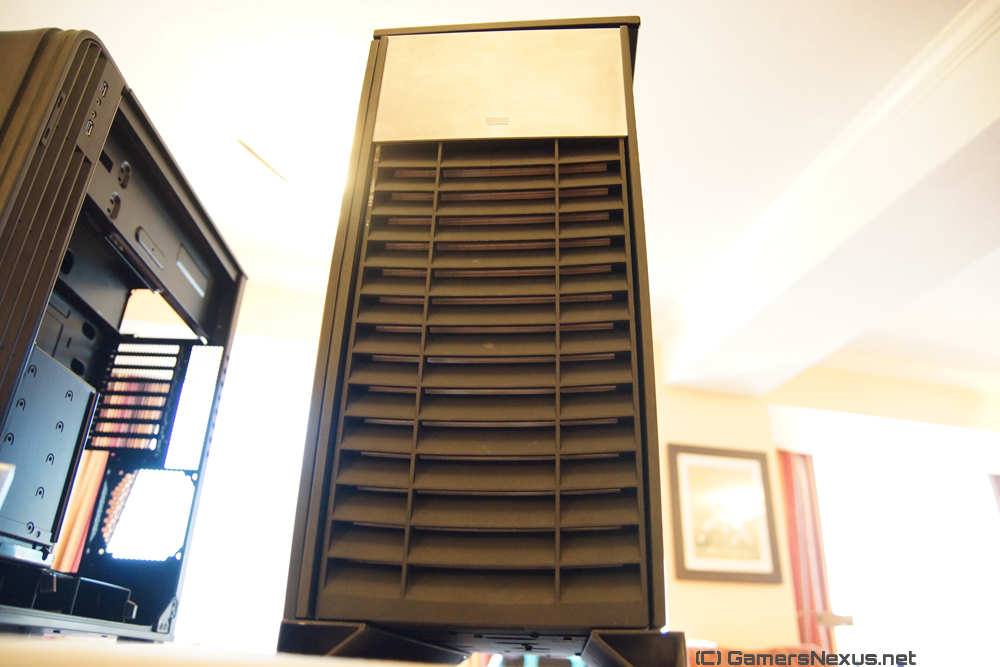 A close-up of the Mammoth.

First, I’ll set the stage by saying that Tony Ou—SilverStone’s on-site tour-guide—has given us insight to case and thermodynamic engineering principles that we previously did not have access to; the SilverStone group easily has one of the most educated on-site staff I’ve personally worked with, and that is reflected heavily in the quality of their work. Initially, I wasn’t impressed by the seeming lack of fans, cable management, and ease-of-installation options offered in the new full-size cases, but that rapidly changed as the performance optimization was highlighted. Fans don’t mean everything – optimization does, though. SilverStone wants to do more with less.

Let’s start with the video, just as a solid primer of what I’m about to discuss. This is just a product walkthrough with Tony Ou of SilverStone, but he offers a little more than the standard brochure knowledge and takes an extra step to explain design choices.

And with that, we’ll start on the Raven, as Tony did. 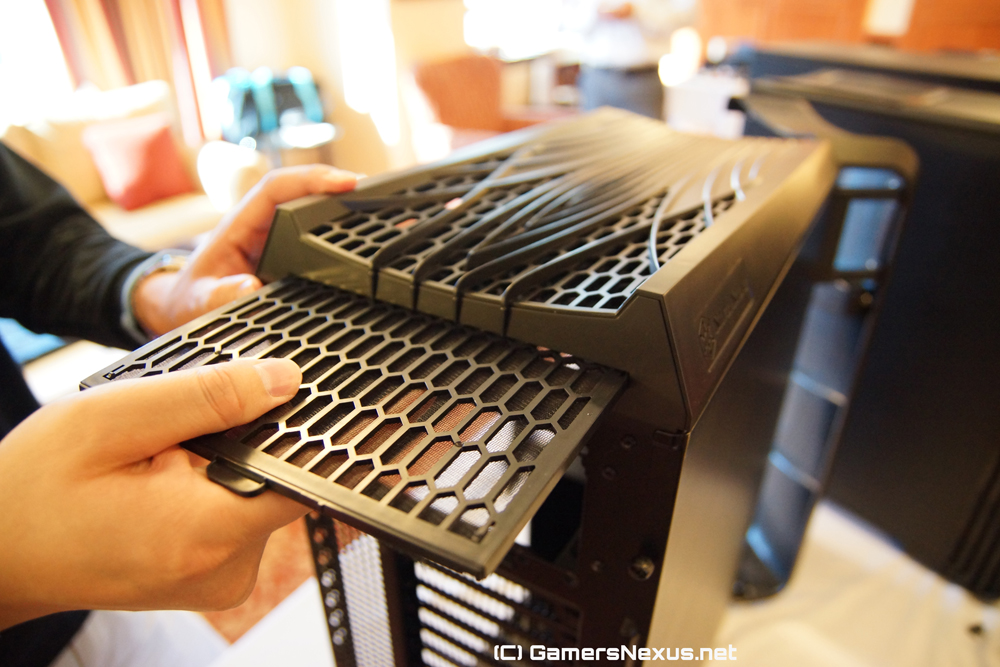 The new Raven RV-04 is a rebirth of the famed Raven series, which broke ground on new cooling techniques not previously utilized in mainstream cases; you may recall it for its rotated motherboard mount and stack airflow, but the new one amps things up a bit. The RV-04 has a few key features:

All three of these cases use the same interior, but have improvements on the exterior dependent upon needs of the user. The cooling optimization was what had me most interested – in terms of the RV-04, the case’s front intake pulls air in from the sides of the front bezel, then pulls through a filter (there is no metal mesh suffocating the fans), and shoots it into the case; at this point, the air passes through an angled air channel that helps guide airflow across the GPUs. Many other cases don’t make use of this, so it’s an important item to touch on for your future purchasing decisions: When fans simply blast air through the front panel—especially with fans that sort of scatter-shot air in a more turbulent outward-spread—you’ll lose a lot of that cooling potential to the side panel of the case. SilverStone’s internal bezel is slanted inward, ensuring air is not lost to the steel interior and pushing it toward hot components instead. 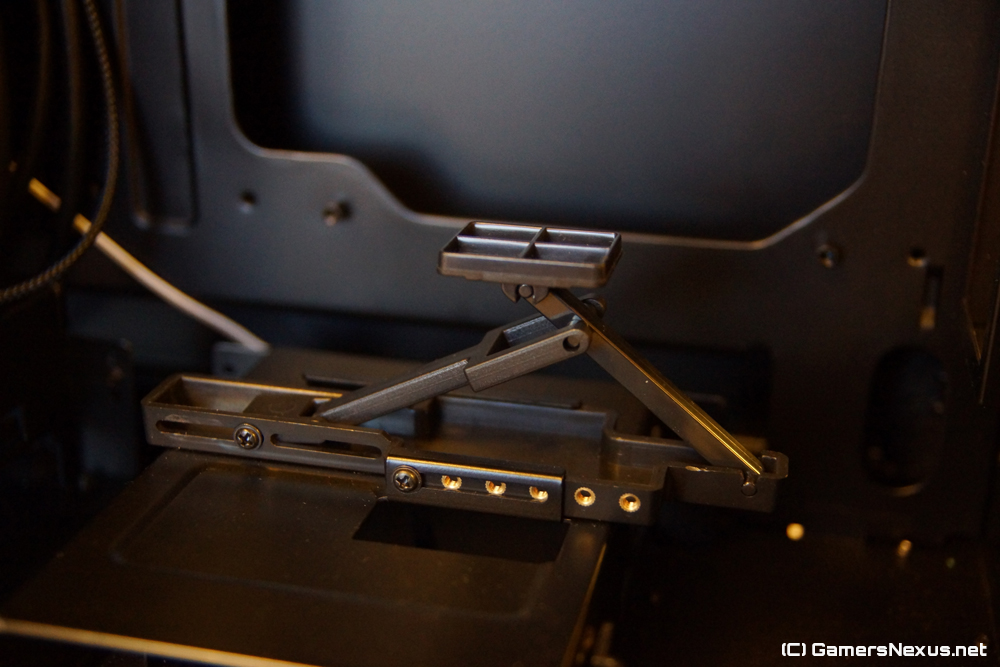 The RV-04 supports Extended ATX and anything smaller and has more than enough space for cable management between the board mounting panel and the side wall. The RV-04 also ships with two fan spindles for fan-speed control, both of which linearly adjust the power of the fans (meaning it’s not using presets – it actually gives you Y when you input X). On the aesthetics front, the RV-04 has an aggressive raven-like design etched out of the top plastic that fits the scheme, but is easily outdone by the Fortress’ aluminum paneling. That’s not to say the Raven looks bad, just that the FT case may have a more sleek design for your purposes. The Raven will MSRP somewhere in the $150 range. 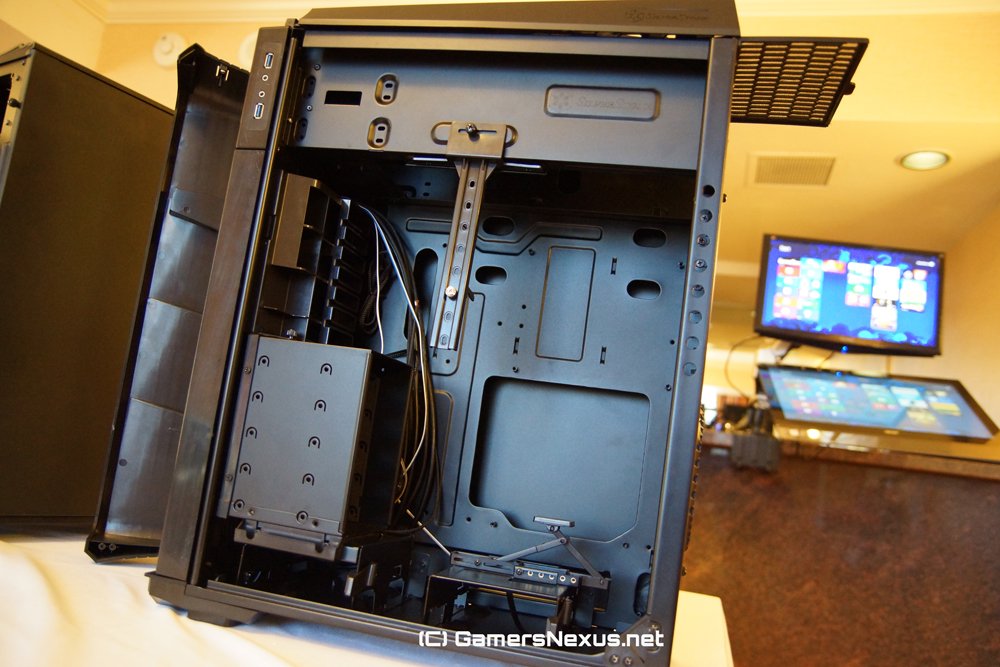 The interior for all three cases is mostly the same; small touches were made on cables and sound-dampening materials, but the mounting is unchanged.

Keep in mind that the interior is identical (or nearly so), so I’ll focus on the added exterior benefits. With its aluminum unibody, the most immediate difference is the general appearance – it’s a clean design that tends to be compatible with almost any building mentality. Speaking to the airflow elements that were more interesting, you’ll see in some of our photos that the side of the front bezel (remember, the front fans intake through the side of the front bezel) has an extruded fin angled toward the back of the case. The objective of this, we were told, is to direct the noise generated by the front fans away from the user. It seems obvious now that we’ve seen it, but is a very important feature. I’d be curious to see how large of a dB difference there is between the Raven and Fortress.

Internally, the major difference on the FT-04 is its foam-covered panels, which should help significantly insulate noise and further reduce the dBs exposed to the user. Aesthetically, the FT-04 also ships with white cable tethering/braids and white front fans, making for a more striking color contrast.

This case is… interesting. And damn big. I also happened to be laughing at Tony’s expense during the filming process for the Mammoth (we were both fairly exhausted from the show), mostly because of his explanation of the name: Named the Mammoth because it can survive extreme environments, just like the actual mammoths. Just, uh, this one isn’t covered in fur. And hopefully won’t go extinct because of an ice age. 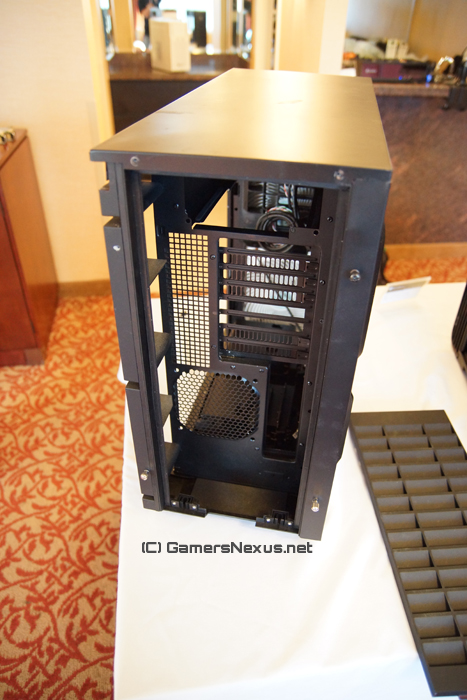 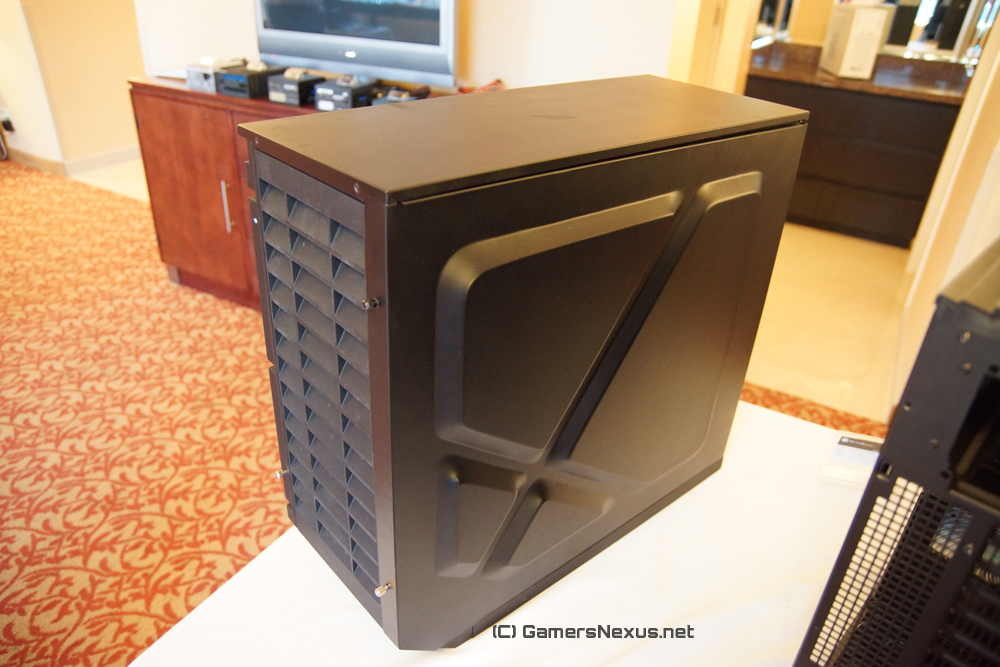 This case uses an air conditioner-grade dust filter on the front and rear, has a somewhat spill-proof downward-angled design, and has even more depth for cabling. So much that you’ll never have to worry about management on the rear-side. Using the same three fans internally as the previous two systems, the Mammoth is able to overcome even the highly-resistant filters and provide adequate cooling for workstation and high-end systems. The target for the case is primarily workstation-related, though anyone in a dusty environment would do well to consider a purchase. The video should cover most of the features in this one, so check that out (above) for more info.

And with that, I’m off to get a few hours of sleep before our plunge into Day 4 of our CES/Pepcom week. I can promise further information on SilverStone’s Mammoth and smaller cases in the near future, though – but I also have a desire to not die of exhaustion at CES, so I’m going to bed.

Let me know if you have questions, as always.