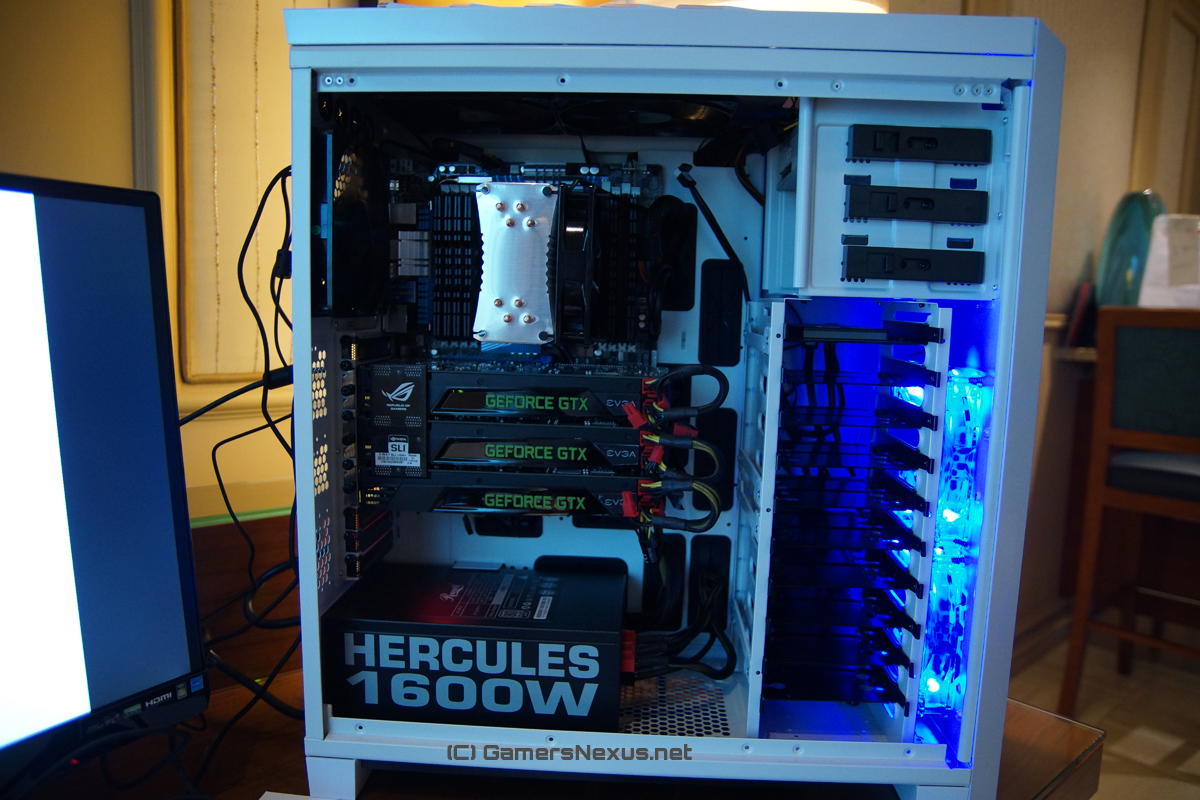 Although we’ve previously posted about Rosewill’s new Armor Evolution series case and the THRONE and mechanical Helios keyboard, but as of tonight we’ve finally gotten some hands-on time with the company’s new gaming equipment. We were joined by Buu Ly, Product Marketing at Rosewill, and Chinny Chuang, owner of awesome name and Marketing Manager at Rosewill, to get an extensive hands-on with the new gaming offerings.

Aside from the Armor Evolution and THRONE—both of which are certainly “old” news at this point, relatively—the company also has a new budget-class gaming case for system builders: the Rosewill Line M, marked for MSRP at ~$50. Although it wasn’t the focus of Rosewill’s CES venture, we found it to be one of the most appealing for the majority of our builders-on-a-budget; there’s a very clear market carved out for affordable gaming PCs, as we’ve proven time-and-again, and with the Challenger now aged and a bit outclassed by newer cheap enclosures, it was time for something fresh. This noted, let’s start off with a quick video overview from Buu, who walked us through the Throne and Helios RK-9200 mechanical keyboard.

This preview of Rosewill's Throne and RK-9200 Helios mechanical keyboard, included with our impressions below, should supply enough info to tide you all over until review time.

Yeah, yeah – so I didn’t cut the first second out. It’s CES, we don’t have the level of processing power demanded for re-rendering out here! Let’s start with the Throne, then transition briefly to the Line M and keyboard.

Regardless, it’s a thorough walkthrough of the features. The specs table hasn’t changed from our announcement post, but my impressions have. The THRONE is not an official successor to the Thor V2, contrary to what I thought (the features and name lined up, and the frame is very similar), but is close enough that it may as well be. Using the same “sharkfin” design, or “chevron” design, as I’ve called it previously, the Throne aims to isolate noise and keep dust out when idle, but allow airflow when under load. The case ships with 5x140mm fans (two of which are blue LED- or red LED-enabled, depending on case color) and a side 230mm fan, a side-ejected bottom filter that covers the entire usable bottom of the case, roughly 15-18mm of cable management space on the right side (no bezel), and slots for 2x140mm HDD bay fans.

Aesthetically—at least as far as I’m concerned—the Throne looks excellent and has a very clean interior; it’s begging to be outfitted with custom cable sleeves to give a stark black/white contrast or white/blue contrast (blue cable sleeves and blue LEDs?), which makes it a potential playground for enthusiasts looking to enjoy the interior design aspect of system building. The Rosewill team informed us that they’re going for a very “aggressive look,” primarily focusing-down on the gaming market; actually, having worked closely with Alienware in a previous job, the Throne reminds me very much of Alienware’s pre-built innovations from several years ago. That’s not to take anything away from the Throne, especially considering that the AW cases were not available separately, just to note that it’s a tried-and-liked design.

Granted, not everyone wants an aggressive exterior—the sleek look of SilverStone’s new Fortress FT-04 and Corsair’s new 900D look fantastic in their own way, and might even be preferable for many builders.

And with the name-drop of these new cases, we start dipping into discussion on what is growing to be an extremely competitive market: It’s not as easy as it was a few years ago to sell a new enthusiast-grade box; enthusiast computing is accelerating in growth where other realms of system building (mid-range) have sort of stagnated, and with that growth, we see all the manufacturers trying to tap into that market. The Corsair and SilverStone cases are just the start of what we’ve seen at CES – I haven’t even gotten around to writing our Lian Li coverage yet, and they’re looking to take a portion of the share, as is NZXT with the (very impressive) Phantom 630 we previewed.

It’s not easy, and I commend these companies for taking risks, but it also means that we have to be more careful with our recommendations; there’s a lot more out there to choose from, and they all tend to match differing system builder styles: The performance builder focused on airflow optimization will want one case, the mid-range gaming builder might focus on a killer design, and the sleeper approach aims to keep things sleek and clean, but we don’t have to confine ourselves to these boxes. Not anymore.

Without any thermodynamic testing on the Throne, I obviously can’t give you any accurate cooling data to help aid in product choices (though we should be benching all of these cases shortly), but I can comment on the design of the cooling. The HDD cage mounts an additional 2x140mm fans if desired, as I mentioned, but I’m curious as to whether those might actually inhibit continuity of airflow to the CPU—easily the hottest component—by accelerating intake directly into the GPU fans.

The proximity of the 680s in the case to these fan mounts furthers my suspicions of better GPU cooling at the sacrifice of poor CPU cooling, but at the same time, closed liquid loops are now common-place and may circumvent this issue by nature of being, well, a cold plate with a pump rather than a complex air unit. As I explain in my “How CPU Coolers Work” post, though, air coolers still have a place in this world—they’re not obsolete. With vapor chamber integration and fins in the proximity of passive heatsinks on the VRM and memory modules, air coolers can actually conduct heat away from other crucial components on the board. Why am I talking about this? I don’t want anyone to walk away with the impression that air cooling is irrelevant – always consider it as an option, especially if the case you’re using might focus more on GPU cooling than CPU cooling.

Testing will tell if this hypothesis is correct. I’m also curious to reverse the top fans to intake rather than exhaust for a few reasons as well, but that’s related to other testing we’ve been running in our smoke lab.

In terms of the cable routing, the Throne has around thirteen cable pass-throughs, around nine of which are rubber grommeted, and somewhere around 15-18mm of space on the business end. It’ll route cables, that’s for sure, but it’s also got fairly standard tool-less ODD and HDD mounts (which accommodate SSDs with bottom screws), so easy installation is a key factor with Rosewill, unlike SilverStone (who focus on performance).

At the end of the day, it’ll come down to a benchmarking and aesthetics battle between the Throne and NZXT’s Phantom 630, both of which MSRP at $180 for high-end/enthusiast builders. From purely a features perspective, I did find the Phantom 630 to offer much more impressive options at the price, but cooling will be another question entirely. Again, that’s just something we’ll have to test in a duel. Aesthetics are obviously idiosyncratic, so I’ll leave that up to your needs.

This one’s much simpler, almost to a point where it’s… oddly relaxing. The Line-M has a large-ish cut-out for CPU cooler mounting brackets, ships with 2x120mm fans (specs unknown at this time) front/rear, and can accommodate an additional 2x120mm fans on the left side panel. There’s no cable management to speak of, but at this price, that’s honestly sort of expected, so no points lost there. There’s really not much more to say than that – it fits a pair of 5.25” optical drives (external) and can mount a single 3.5” drive (no native SSD support). For such a simple case at $50, there’s not much more to expect – it seems like a reasonable offering at the cost, and might make for a good budget/cheap gaming PC build.

We’re testing this one in late January/Feb some time, so keep an eye out for that info. The case is mATX.

I don’t want to go too in-depth on the keyboard at this time (our previous article and the above video sort of cover it), but it’s worth a mention. With Rosewill’s Cherry Red/Black mechanical keyboards hovering around $80, they’re competitive with Cooler Master’s and Razer’s lower-end blue switch offerings, but the Rosewill keyboard has more overall features and a responsive kick-back. The Helios has red/green LEDs for each key, but the keyboard is not individually lit (unlike Corsair’s new model); however, you can set a few differing profiles for WASD/arrow key colors.

Let us know if you have any questions about any of these products.