Zalman's nickel-plated copper air coolers have been one of the most attractive units on the market for some time now – sleek, gray/black, and still copper. It works well in gaming and enthusiast systems, to be sure. The 9900 Max and 9900 DF are great examples that compete with other equally-sharp designs, like the Tuniq Tower 120 or CM T812.

The Zalman coolers produce a great visual effect through an acrylic side panel when lit by LEDs. Combine the large diameter, radially-arranged heat pipe design of these coolers with a Zalman custom high-flow rate, microchanneled liquid cooling pump and you get the new CI Liquid Cooler. When mounted in the case, the unit looks great from every angle—even its rear mounting point on the back of the case—which is a major advantage of liquid, given their small-ish design. We haven’t yet tested performance on the cooler, but all of us on the team are very interested in the fusion of traditional air cooler engineering with modern liquid cooler functionality.

Our hands-on preview of the Zalman CI Liquid Cooler unit was brief, but we do want to emphasize the potential for greatness given the radial heatpipe integration in the cooling fan. Without having tested the unit ourselves, it’s tough to say whether that potential will translate into delivery, but we should know more in the coming weeks. 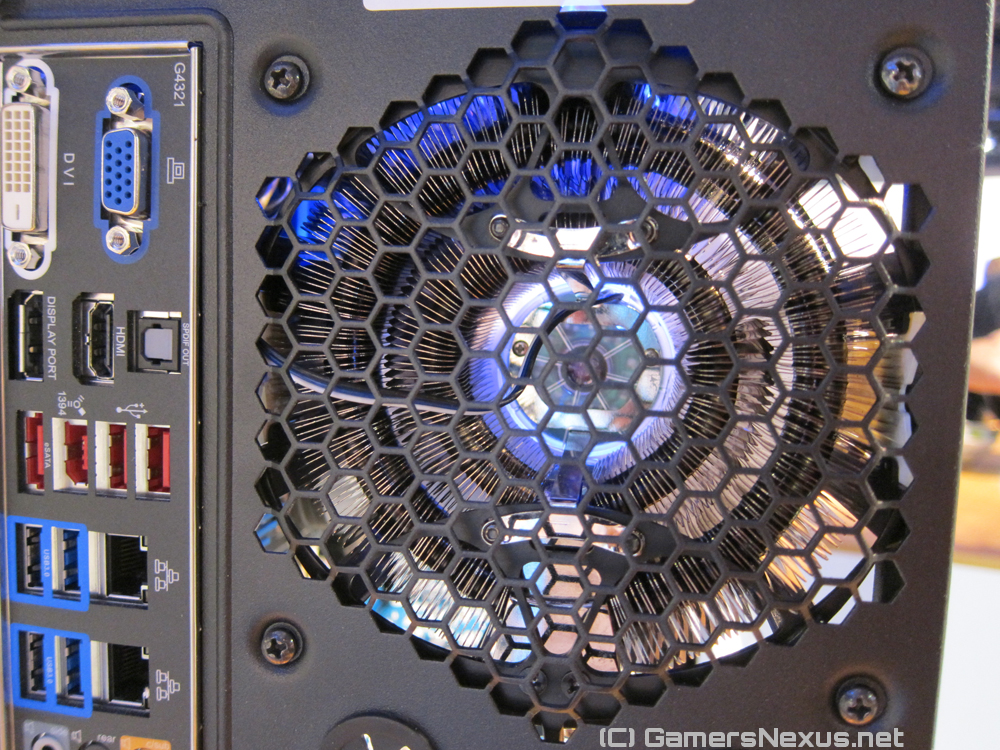 While the CI Liquid unit is a very quiet cooler for system builders, Zalman has another that trumps it in the low decibel category: The Cube, which was announced back in November (we’ve mentioned it in a few articles), is a completely passive CPU cooler. There is no active component. In case you missed out on this product release and you're interested in a nearly-silent system, read on! While it does appear large, Zalman's Edmund Li assured us that it does fit inside most mid-tower cases. He also pointed out that it was designed so that there is enough clearance around the base for RAM with tall heat spreaders. If you're into silent builds for office purposes or just a quiet home system, this cooling tower warrants some consideration. We’re not quite sure how its high-end performance is, but for most budge-to-mid-range builds, the large surface area should provide enough thermal dissipation potential for those purposes.

One other nice innovation on display at the Zalman booth was inside the previously-released MS800 Plus. This piece of tech may have been overlooked by many, but if you're like me and have enormous video cards, you're going to like the GPU support pillar – similar to SilverStone’s load-bearing arms introduced to the RV-04/FT-04/MM-01 frames. Taking a look at the photos, you'll notice that the screw-tensioned supports are easily adjusted but offer just enough support to take the stress off of your helpless PCIe slots. Sagging 7950s and 680s everywhere may now rejoice! If you like this case enough to check out the pillar then Zalman would also like to point out that, in addition to all the standard amenities of a high-end mid-tower, integrated fan control, dust filters, and a clean design, the case also sports front-loading SATA drive bays and support for a 280mm top-mounted radiator. 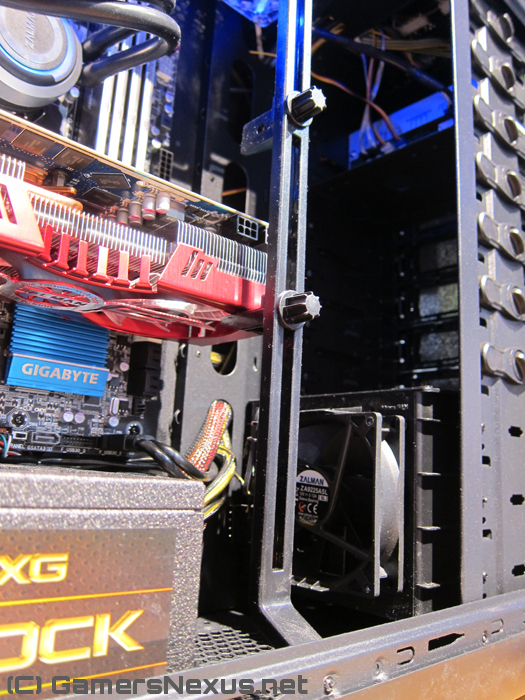 That’s it for this quick Zalman booth preview at CES 2013 – we’ll have further information available as we examine products in more depth and run thermal benchmarks. Be sure to check out the home page for more CES 2013 gaming hardware launches.