My first gaming PC build actually used an old Antec case – long discontinued at this point – but since then, I’ve closely followed their progression in the market. The company has produced some of the undisputed leaders in sales and innovation, specifically in the form of the Antec 900, which was almost single-handedly responsible for guiding case design methodologies toward our modern featureset. The 1100 has been ranked one of the highest cases on performance benchmarks for thermals, reigning in the top few for most of its shelf-life. Not all of their products are hard-hitters, as with any company, but we do have solid evidence that Antec at least is capable of predicting future demand for upcoming features in gaming cases.

The GX700 won’t blow the top off of the enclosure industry as the 900 did, but it is yet another competitive offering in the entry-level system building market. After looking at Rosewill’s ultra-cheap Line M gaming case (marked at ~$50) which impressed us at the price, this one (marked at ~$60) looks like the Trump Hotel against The friggin’ Quad. Can you tell we’ve been in Vegas all week for CES? 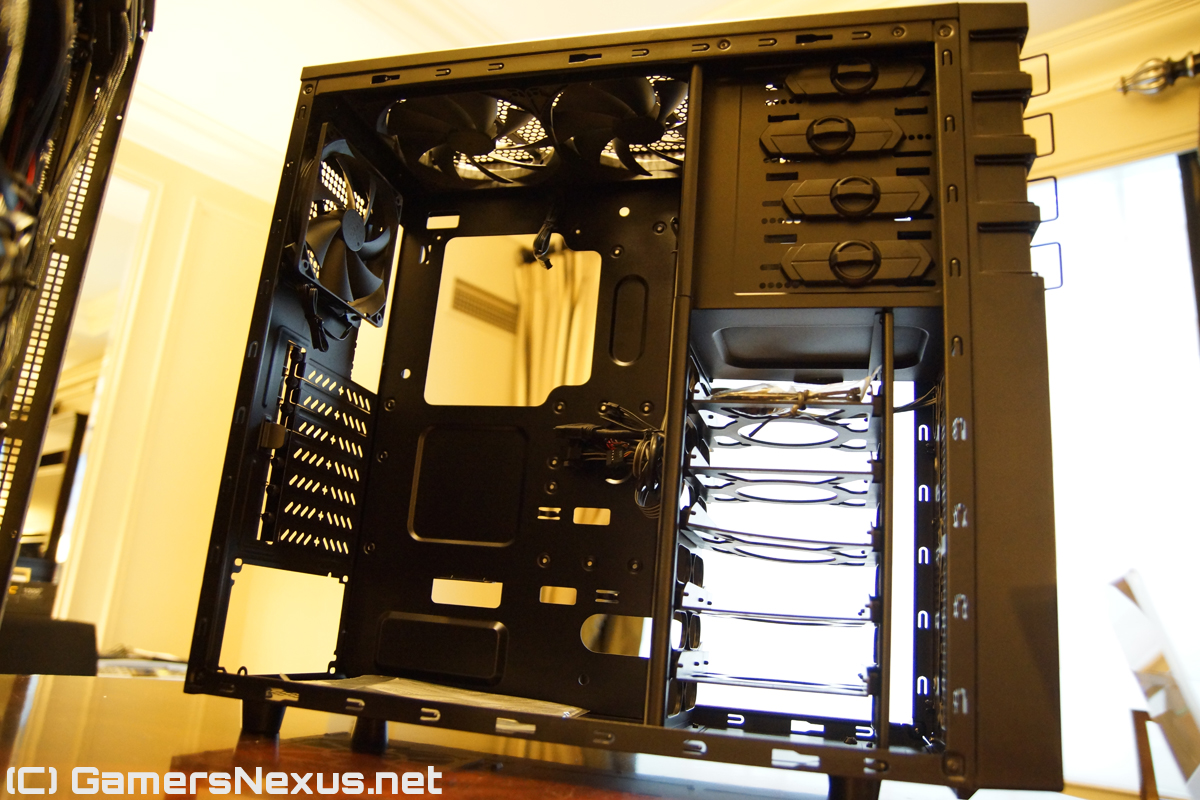 This Antec GX700 gaming case hands-on preview will offer a look at the newest budget PC case on the market; we also look into the TrueQuiet 120mm fans by Antec.

The GX700 is impressive at the price-point. It doesn’t innovate and it doesn’t break new ground, but it does aim to offer an affordable solution for gamers who have grown tired of the same old Challenger / 200R / Redbone cooling options. We worked with Justin Chou, marketing coordinator at Antec, to produce a quick 1.5 minute video run-through of all the major features in the case, so let’s start with that:

A solid preview, to be sure. What may have immediately caught your ear was Chou’s note that the case ships stock with 2x140mm top fans and 1x120mm rear fan, all in exhaust configuration; we’ve all grown used to the more standardized front intake + top/rear exhaust config (or as SilverStone has taught us, top intake for better performance in some cases). When asked about the thermal testing on the configuration, Chou noted that he has seen “good performance with a top radiator,” and figured that the stock configuration “should be fine for gaming systems, they pull a lot of air.” My own hypothesis? Well, unless the front grill obstructs intake to the extent that it is actually preferential to favor alternative positioning, I’d imagine front intake + side intake + rear exhaust with the CPU cooler exhausting to the rear would work best. 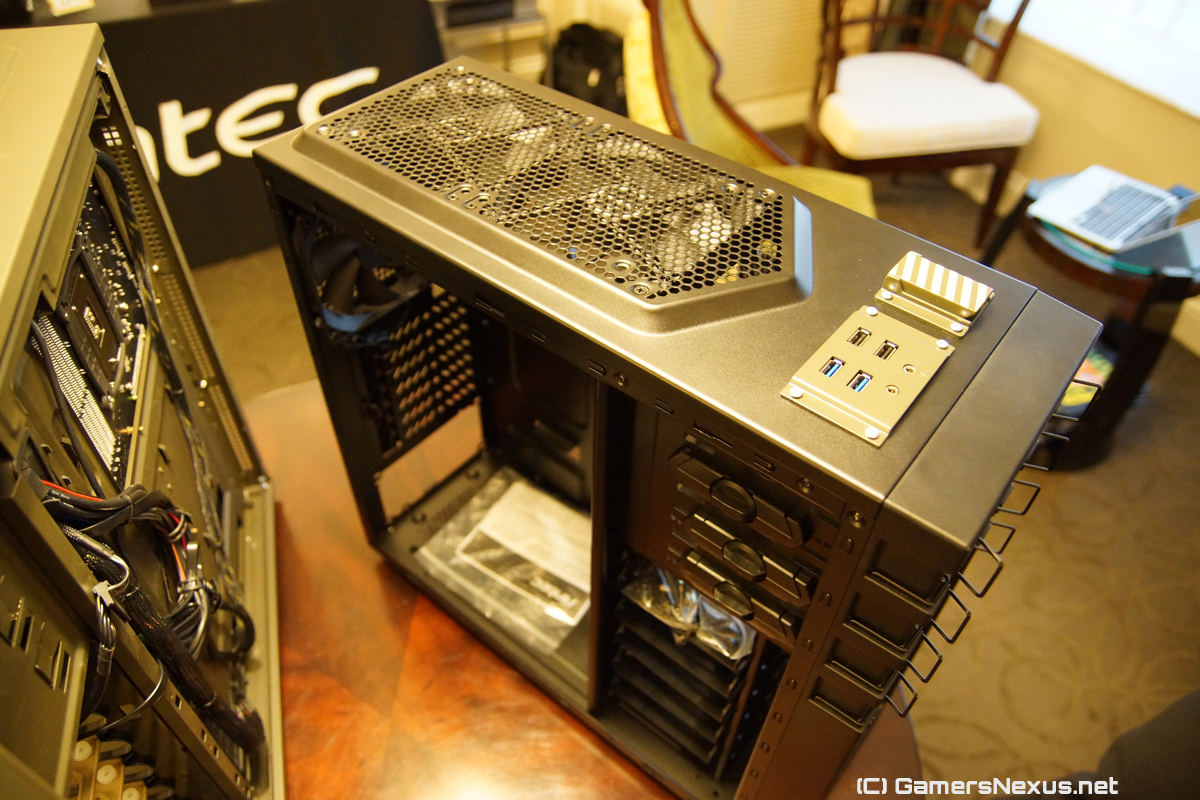 With an air cooler, which is what the majority of those purchasing a $60 case will operate on, it’s easy to inadvertently suffocate the CPU cooler by mounting too many exhaust fans in the vicinity; we saw this in our Phantom 820 testing, which actually heated up when we added an additional top exhaust fan. This was because the top exhaust was fighting with the CPU cooler for cool air (intake from the front/side), and it actually makes physical sense when considering the intake angle of the CPU cooler with the flanking exhaust positions of the two top fans in the 820.

We really won’t know more on the cooling performance until we simply test it, of course.

All this said, I have to bring us back to earth and remind everyone that it’s a $60 entry-level gaming case, so despite my concerns with airflow optimization, the case still seems like solid value at the price: You get three fans (which you can move around later, anyway), barebones cable management options, an entirely tool-less installation process to streamline for new PC builders, a non-linear fan controller (3-bit toggle: Performance, quiet, off) concealed under a totally inconspicuous missile launcher cover, 240mm radiator support, and a large CPU cooler cut-out. That’s a lot of features for a $60 case, and frankly, I think it’s extremely competitive.

The question at this point will be whether or not Rosewill’s price-encroaching R5 (often priced at $70 these days) will pose a better option for many of you. The thing is, though, you can always say “for only $XX more, you can get a better Y.” To the same tune, don’t get caught up in perpetually “upgrading” if you’re already satisfied with what’s available in your price range. For instance, I’d almost never be able to fit an R5 into our ~$500-$550 PC builds, but I could see us debating between the Line-M and GX700, based entirely upon whether that extra $10 is within budget. Honestly, it’s probably worth the ten bucks to jump up to Antec’s GX700 for the three fans and moderate cable management options.

Antec’s GX700 case is impressive overall and I’m seriously looking forward to benching it against similarly-priced models on the market. If the thermals are cooperative, I can see this case potentially being used in many upcoming budget PC builds.

Just for something artsy, here's what was in their 1100: 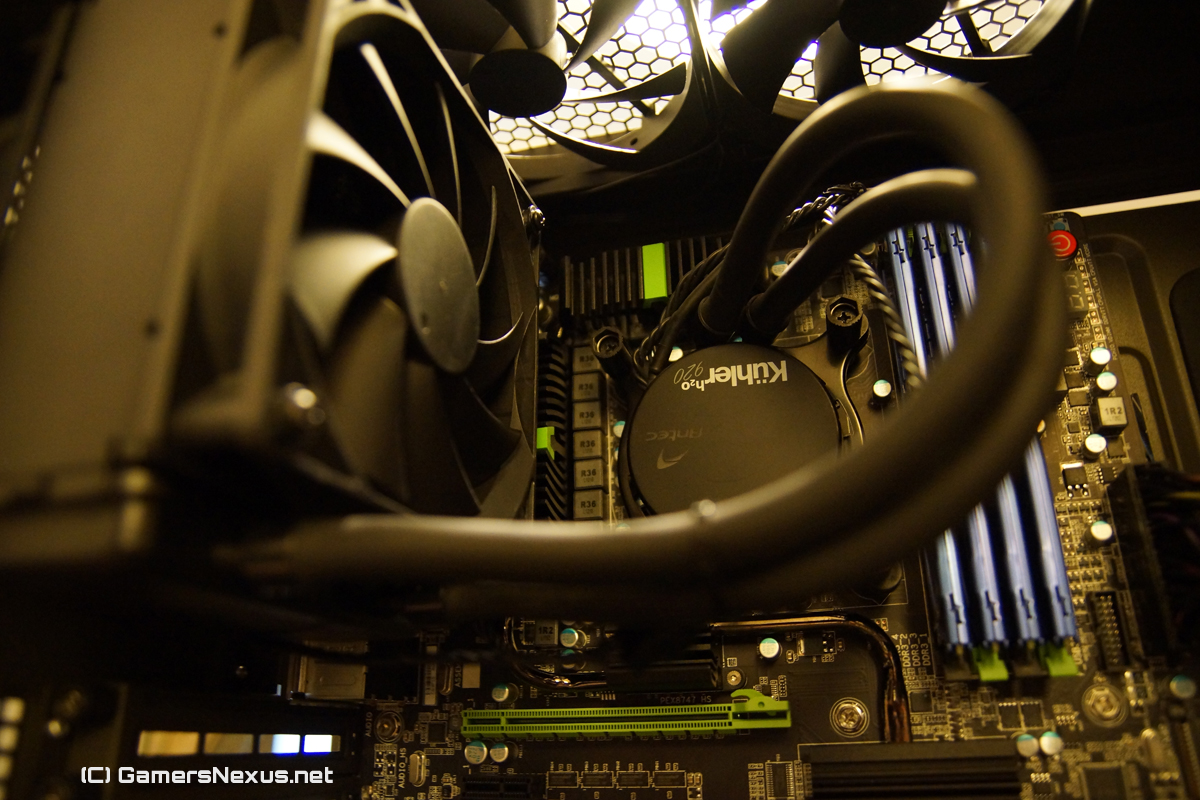 This just deserves a brief shout, mostly because I was interested in the design. Antec has some new highly-colorful fans on the market, their TrueQuiet 120 series, which offers a bit more than just colorful LEDs in an encompassing strip; although we do not presently have hard specs available, the design of the fans utilizes a sort-of unibody composition of the radial fan mount and its internal blades. It’s tough to explain without seeing it, so let’s start with an image: 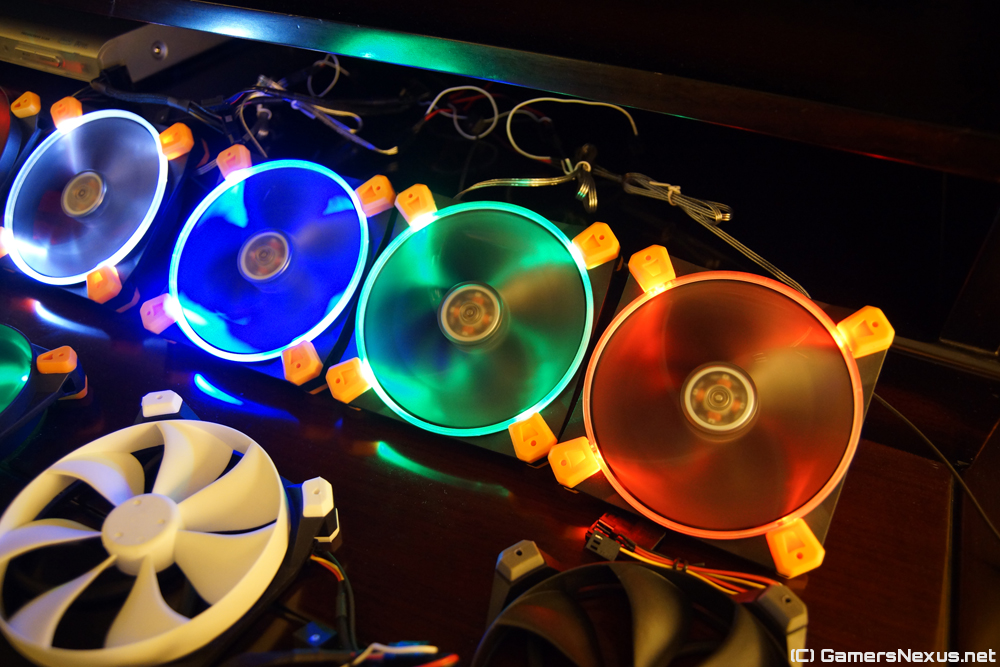 The circular enclosure is actually directly connected to the blades, meaning it spins right along with them. In the demo, I noted that when spun by hand, the fans seemed to perpetuate motion for far longer than traditional fans. I originally assumed this was a bearing advancement, but later realized that it’s due to the inertia potential of the heavier, unified unit. The fan spins more easily with less force (I’m sure you could do all sorts of energy conservation calculations by exploiting centripetal force tendencies), which translates into a smaller motor requirement. In turn, a smaller motor means longer fan blades (more scooping surface area), which eventually leads to greater overall airflow in the same space as a normal 120mm fan. Chou informed us that the blades in the TrueQuiet 120 series are roughly the same length as blades in a traditional 140mm fan as a result of this – though I couldn’t confirm this on-site, it does visually look to be about the same.

The colors are fantastic, too – vibrant and plentiful, but I’m personally most interested in overall design of the fan. It’s undoubtedly unique and could make for a highly-efficient 120mm option. The fans also have a high-quality rubberized mounting standoff on each corner, meaning there should theoretically be no noise produced from rattling/vibration.

We’ll post again once we have more info on all of these, or potentially just include it all in impending reviews.

That’s it for now. After a few hours of sleep, we’ll hit the show floor for one more day and then return home.