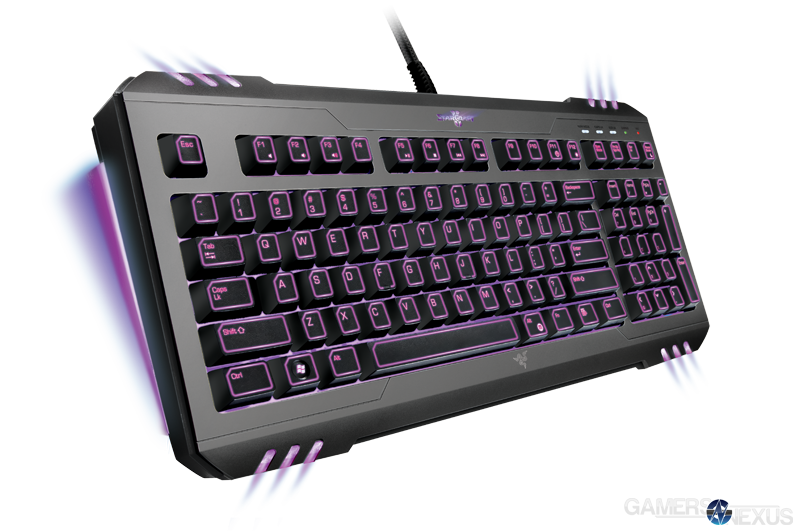 Gaming peripheral manufacturer Razer has announced the re-release of its custom StarCraft II gaming peripherals, now in Heart of the Swarm flair and boasting RTS-specific features and other interesting design elements. Among the company's re-launched peripherals are its Spectre mouse, Marauder keyboard, and Banshee headset, each outfitted with the StarCraft II logo in a default deep purple color, a la the HotS/Zerg origins.

Perhaps the item of most technical interest is the Marauder keyboard, which hosts what Razer calls "an APM Lighting System [that] offers a fully-integrated gaming experience that responds directly to a player's maneuvers and speed, providing vibrant performance feedback." The same feature was found on the original Marauder, launched some back in 2010, though we haven't personally tested it. The backlit keyboard features a fairly comprehensive color spectrum and manipulates the backlight color in accordance with the player's speed and actions, but is decidedly high-price considering its lack of mechanical switches (MSRP $100).

The keyboard polls at 1kHz, producing a respectable 1ms response time to ensure elimination of input lag. Although it is not mechanical, Razer's marketing specifications note that the keyboard has "optimized key travel distance," but lists no further details as to the actuation point or force requirements. The Marauder has grip-tape-like paint on the surface of its keys to improve contact and is outfitted with LEDs in its four corners, including an LED-backlit StarCraft II logo toward the top. StarCraft II UI-emulated etchings can be found on the keys.

In close pursuit of the keyboard is the company's somewhat oddly-shaped Spectre five-button mouse, which is spec'd at 5600 DPI on a standard laser sensor and runs on a 1kHz poll frequency; the mouse offers "click button force adjustments" for gamers who'd like to manipulate the input responsiveness of the buttons and will use Razer's in-house macro utility for key bindings. The Spectre also features the APM lighting system. The mouse MSRPs at $60.

Headsets have always been an anchor product for Razer, and with the branded SC2: HotS peripheral launch comes the Banshee headset (MSRP $80). Razer's Banshee uses a fairly sizable 50mm driver in each cup, produces a frequency response of 20 Hz - 20kHz (which is mostly standard at its price-range), has a 102dB sensitivity (at 1kHz), a seven-foot braided cable, and 32 Ohm impedance at 1kHz.

In case you'd like to give yourself a seizure while playing StarCraft II, the Banshee also ships with the APM rave system.

Let us know if you have any questions about these products and we'll do our best to secure answers from the appropriate contacts. You can find the product pages here.