One week after the official GTX 780 and ShadowPlay announcement, nVidia's next big embargo has finally lifted, and this time, it's for the GTX 770.

Let's cut to the info you all want: Below, we'll explore the GTX 770's specifications, release date, pricing, memory bandwidth, and 770 vs. 780 benchmarks.

Noteworthy Elements of the GTX 770

Sticking with tradition, the GTX 770 sees its official launch exactly one week after the GTX 780, and should be popping up in online stores throughout today. As with their 780, nVidia's reference cards will be immediately available, with manufacturer-made cards and non-reference boards coming shortly thereafter. The nVidia-made reference 770 ships at $400 MSRP, but we suspect nVidia's board partners should ship their versions for slightly less -- if barely -- as is the nature of competition and market saturation.

The reference card uses nVidia's new heatsink, similar in design to the (larger) GTX Titan and GTX 780, coupled with a squirrel-cage fan to help push air horizontally through the heatsink's fins. Board partners will obviously ship with their own heatsinks, which tend to either enable price-cutting or performance boosts, depending on that particular manufacturer's market objectives.

I've said it a few times now, but we should be seeing Boost 2.0 descend through the entire line of GTX 700 cards (which are still Kepler-based -- this isn't a new generation yet), and that includes the GTX 770. For the unfamiliar, Boost 2.0 is what's found in the Titan and grants the user a decent amount of OV/OC control, adaptive fan control (screenshot below) to compensate for noise, and user-targeted temperature thresholds that automate fan speed for that temperature. We also see the Boost Clock controlled in part by nVidia's Boost technology (which can be thought of as similar in objective to Intel's TurboBoost). 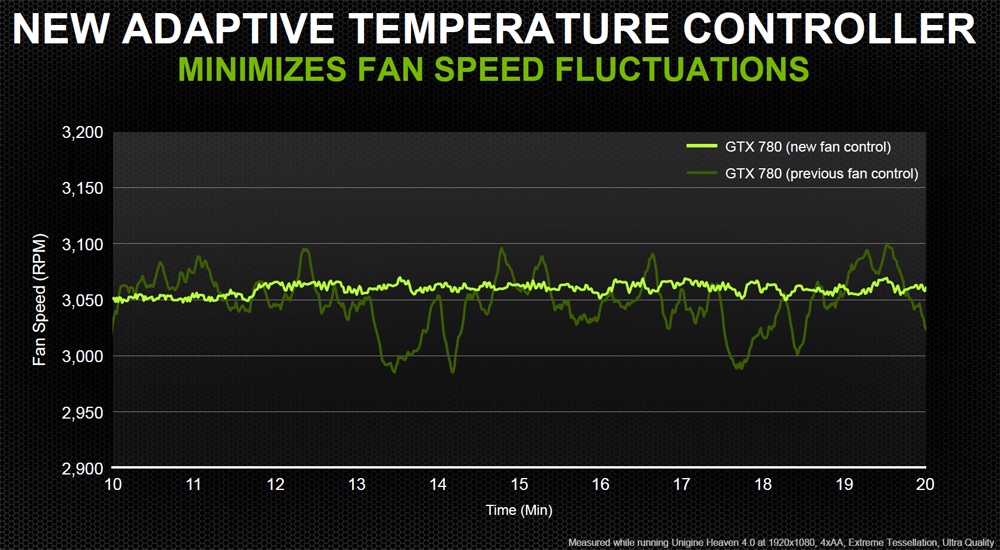 More noteworthy than all of this, the GTX 770's memory config ships in 2GB or 4GB editions, using a 256-bit memory interface and 7Gbps GDDR5 memory. As far as consumer cards go, that's faster than anything else on the market within this price range. Using a standard formula to calculate memory bandwidth (Memory bus width / 8 [convert to bytes] * memory clock * 2 [DDR] * 2 [GDDR5]), we get 256-bit/8 * 1.75GHz * 4, resulting in what appears to be the reference GTX 770's memory bandwidth equating ~224GB/s. The memory clock itself should be around 1750MHz (or 1.75GHz), extrapolated from the given 7Gbps memory speed.

That's impressive bandwidth, and given the 4GB option, it'll definitely go to use. To put things in perspective, the GTX 670 (and 680) ranked in at 192GB/s.

As with all other announcements made by nVidia in recent months, they've once again pushed the importance of the company's renewed focus on SLI. NVidia wants to move away from the days of incompatibility issues with multi-card arrays, and thus has worked more closely with engine developers to optimize drivers for more appropriate performance gains. We were provided with some internal bench results, though haven't been able to independently confirm the results; here's what we know: 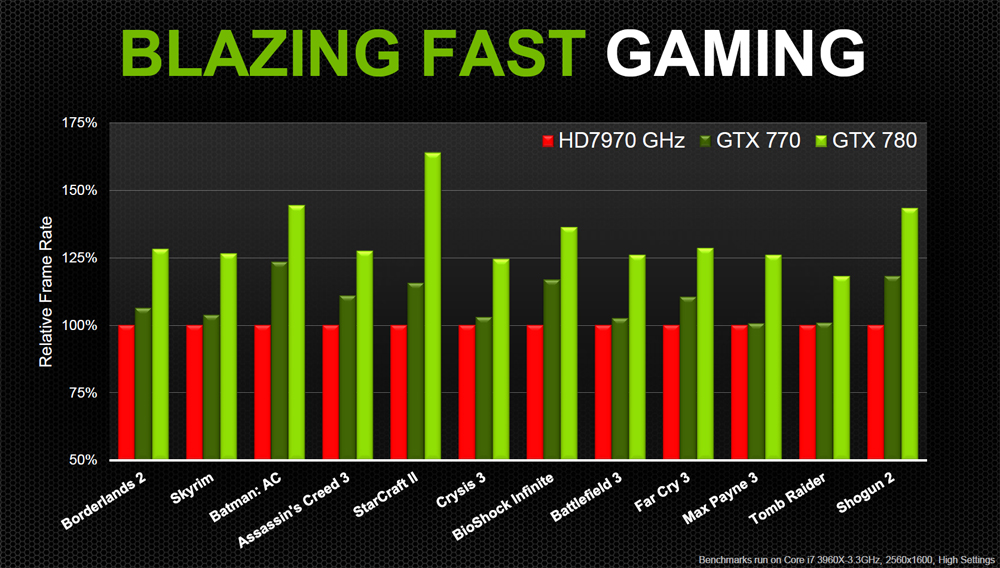 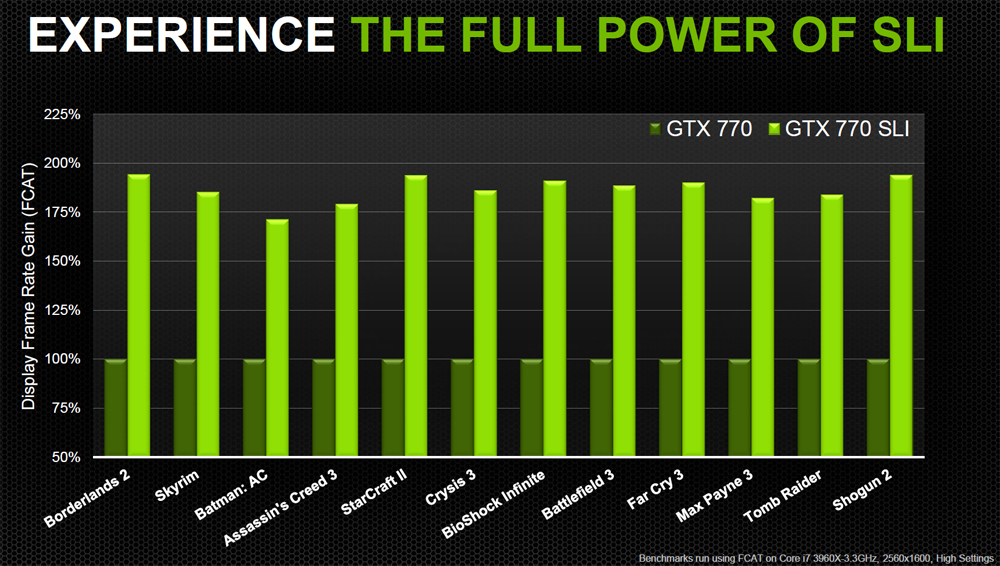 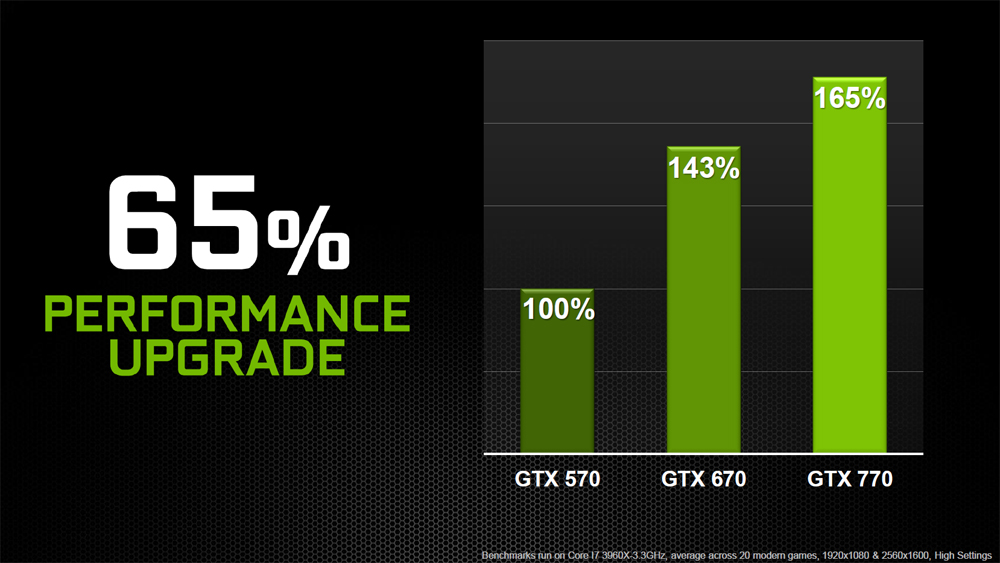 As a quick and final note, we were also told that the GTX 770 would exhibit similar fan dBA performance as the 780 -- approximately around ~42dBA under load.

Let us know if you have any questions about the launch of the GTX 770.