NVIDIA Titan Z Still Due for Q2 Despite Rumors of Cancellation 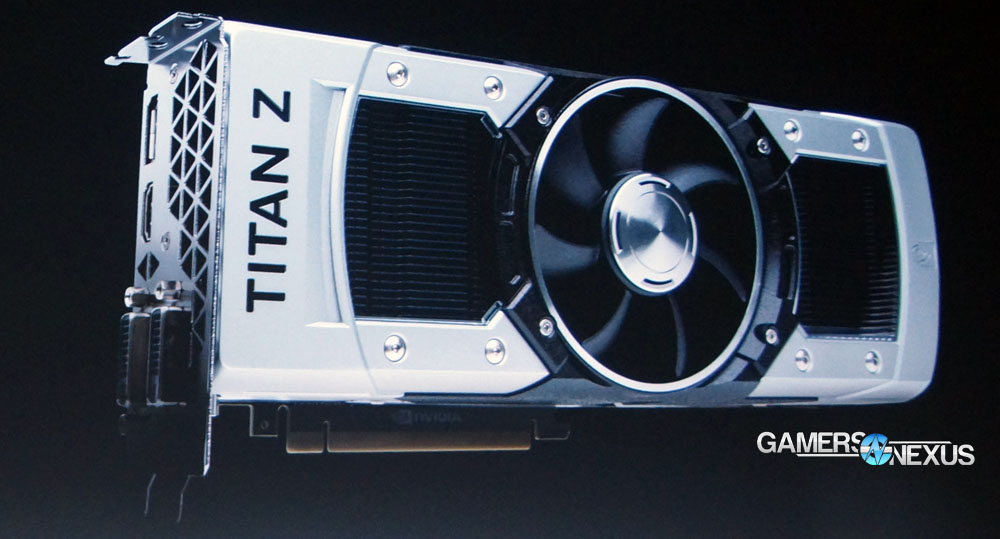 Rumors were spun on social pages and overclocking forums today that nVidia's Titan Z had been "canceled" or "indefinitely postponed," depending on who you asked. We first covered the Titan Z at its live unveil during GTC, in case you missed that, where we filmed the introduction of the company's new full double-precision, 2xGK-110 GPU. AMD announced its new W9100 FirePro card shortly thereafter, soon followed by its 295X2, which is targeted more at gamers and lacks full double-precision support.

I'd like to take this opportunity to educate the community on two key items: First, the Titan Z has not been canceled or postponed beyond its initially-targeted 2Q14 release date, and second, the Titan Z and 295X2 are not meant for identical markets. Each device has its place and they are not head-to-head competition.

Let's start with that first item.

The Titan Z is due for 2Q14, NVidia told GamersNexus

I called our nVidia rep after reading the "news" of indefinite postponement or cancellation and was met with a pretty straight-forward answer (and a laugh): "Actually, on the financial call yesterday, Jen-Hsun [CEO, NVidia] said it's due for Quarter 2. And we're still in Quarter 2," Bryan Del Rizzo told me.

After a quick search, I found the transcript for that financial call. Here's the relevant bit from Jen-Hsun Huang, CEO of nVidia:

"At the very high end, we announced our newest flagship GPU, the GeForce GTX TITAN Z. This is the highest performance graphics card we have ever designed. TITAN Z will please both PC enthusiasts and CUDA developers and will be available in Q2."

And there you have it. Case closed. The card is still due in Q2. It is still Q2.

The Titan Z is Not Meant for Pure Gaming

I've previously explained this same sentiment with the Titan and Titan Black, especially after the GTX 780 Ti's launch on the gaming side. The 780 Ti utilizes the same GK-110 GPU as the Titan (this is pre-Titan Black/Z), but loses double-precision and other simulation & CUDA dev targeted items.

Here's the thing: As with the FirePro cards, though to a different degree, the Titan devices are not built for gaming. That doesn't stop gamers and enthusiasts from using them, but they're just not meant for PC gaming at the core of the design. Actually, the devices generally ship with double-precision disabled by default because its computational redundancy significantly hampers the performance in gaming; game developers aren't building for double-precision because, for one, they don't need it. This means that if you were to stick a Titan into a system, turn double-precision on, and try to play a high-end game, you'd probably see worse (even unplayable) performance than with DP disabled.

Double-precision is meant for serious simulation and scientific endeavors where incredibly accurate, redundantly verified calculations are necessary. 3-Dimensional simulations of the known universe are an excellent real-world example where DP and CUDA devices have been used in tandem to build more accurate models.

As for the 295X2, well, it's not full-DP enabled -- it's crippled, but that's OK. The 295X2 is meant for gaming enthusiasts, not scientists. It's an excellent card in its own right (on paper), it's very affordable, and it has promising changes over some of AMD's earlier Hawaii launches -- but it's just not something you put against the Titan Z and say "this is definitively better." It's not that simple, especially when the Titan Z isn't even available for testing yet.

This is just something I wanted to clear up with the gaming community.