But a large issue was raised: VRAM and VRM cooling. The VRM filters the power going into the GPU to improve stability, and as such can be pretty toasty. VRAM doesn't necessarily run too hot, but can still benefit from heatsinks. So despite the G10 shipping with a fan to cool the VRAM/VRM, users still had worries since they would no longer have the massive heatsinks as they do with stock and non-reference coolers. That's where Corsair saw an opportunity to compete with NZXT.

At Computex yesterday, Corsair revealed their bracket for mounting CLCs to GPUs -- the Corsair Hydro Series HG10. The HG10 comes in two versions: the A1 Edition for AMD GPUs and the N1 Edition for nVidia GPUs.

The most notable feature of the Corsair HG10 is that it uses the stock-cooler reference fan and a heatsink to cool the VRAM and VRM. The advantage of this is that it properly cools the VRM and VRAM, but the disadvantage is that you must have a reference board to use the mount, and it has no ability to mount third party fans. In this regard, the way that Corsair implements the fan and VRM heatsinks leads to limited compatibility. For instance, NZXT's G10 is compatible with the 560 and 5830 and up (see here for full compatibility list), whereas the Corsair HG10 only supports the 290/290X for AMD and the 770 and up for Nvidia. It should be noted that neither of these brackets support dual GPU PCBs or non-reference PCBs. Another note for compatibility is that NZXT has a full list of all CLCs it supports, even if they aren't NZXT CLCs, whereas Corsair only specified which of their CLCs are compatible. This includes: H110, H105, H100i, H100, H80i, H80, H75, H60, and H55. The reason that these brackets are able to be used with differently-branded CLCs is because, like mentioned earlier, most CLCs are made by Asetek and simply rebranded by other companies, so the mounting hardware and CPU block size are the same. So more than likely, the case is that Corsair's HG10 bracket supports non-Corsair CLCs, but they don't want to acknowledgment this. 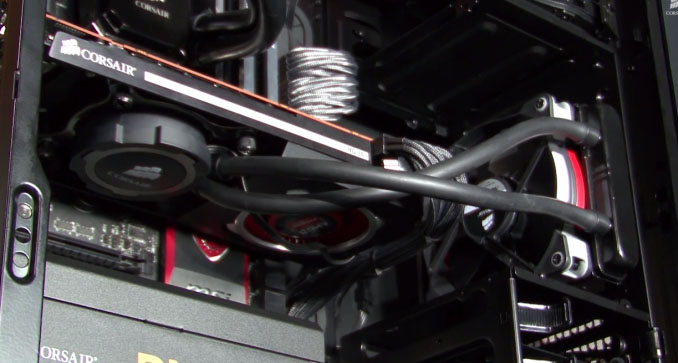 All-in-all, the Corsair HG10 has its advantages and disadvantages. It's smaller and has VRM/VRAM heatsinks, but it requires the stock cooler to use a fan, which cannot be replaced, and it has more limited GPU compatibility. I think it is a variation on the NZXT G10—the name certainly is pretty similar—and I think NZXT has the better product, especially if they included revamped VRM heatsinks with the G10. With the NZXT G10 retailing at $30 and the Corsair HG10's MSRP being $40, I recommend buying the NZXT G10 and a cheap VRM/VRAM heatsink, due to the lower cost and its ability to support non-stock cooler fans. Nonetheless, Corsair's HG10 certainly appears that it will perform similarly to the NZXT G10, and definitely looks sleek. Whether this will be enough to negate its disadvantages is up to consumers, who should be able to purchase the Corsair Hydro HG10 by Q3.