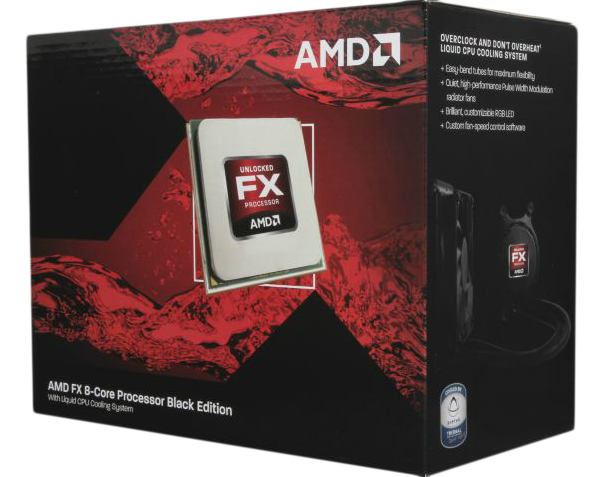 AMD has been teasing a new FX processor with a bundled liquid cooler, instilling hope that AMD would be releasing an updated -- or even completely new -- FX-series enthusiast CPU. To the disappointment of the enthusiast community, myself included, the release was just an FX-9590 with a bundled Asetek AIO CLC.

For those who don’t know, the 9590 is a previously-released CPU which is effectively an 8350 overclocked to 4.7GHz with a 5GHz turbo clock. These CPUs perform well in certain situations, though; in an encoding or rendering rig, the 9000-series can be a smart choice for cost-effective INT performance. For mid-range and high-end gaming, FX-9000 tends to be beaten out by Intel’s offerings.

The issue with the FX-9590 is its 220 watt TDP, due to its high 1.5v vCore. For reference, the TDP of an i7-4770k is 84 watts and the TDP of the FX-8350 is 125 watts. This increases heat produced, meaning that the FX-9590 only works with a select few high-end motherboards. Most AM3+ motherboard VRMs are not being able to handle the large power draw of FX-9000 CPUs. Another issue is that the FX-9590 uses the AM3+ platform, which is fairly lacking in modern features without aftermarket controllers. For instance, AM3+ does not natively support M.2, SATAe, PCIe 3.0, or USB 3.0 on-board.

The FX-9590 is priced at $330 for the CPU alone, whereas the bundle deal with the Asetek liquid cooler is priced at $370. Whether or not to get the bundle deal is largely dependent on sales; just be sure to check official motherboard/CPU compatibility when buying FX-9000 CPUs. If getting the CPU and cooler separately, be sure to also check if the cooler can sufficiently cool the CPU. Overall, we would not suggest the FX-9590 for most gaming builds due to its motherboard compatibility, average gaming performance, high TDP, and the outdated AM3+ platform.

The CPU has its place (like enthusiast overclocking, INT-heavy tasks), but it’s generally not going to be in high-end and mid-range gaming.