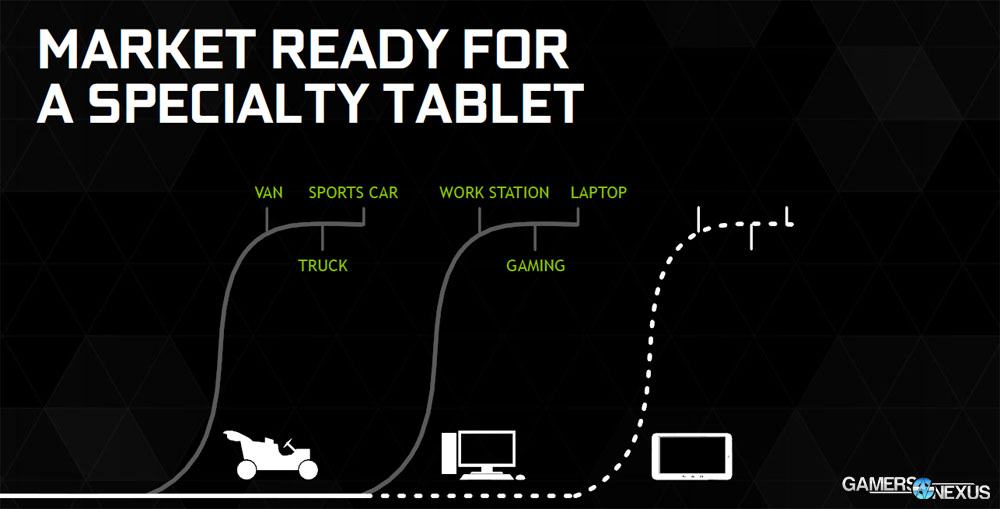 Apparently gaming is a truck and laptops... are a sports car?

The "Shield Proper," we'll call it, has picked up game compatibility substantially over its 2Q13 numbers. NVidia reports approximately ~170 compatible Android games with ~130 compatible GameStream titles (streamed from PC), compared to about 60 Android and 25 GameStream titles in July, 2013. We're told that the tablet should offer even greater support of future games given its more familiar architecture to consoles and traditional PCs.

In terms of its actual uses, the Shield Tablet effectively mirrors the Shield, just with expanded hardware and connectivity. Streaming games from a PC or beta GRID server (effectively "games on demand") is possible, just as with the Shield, and host Android play is also fully supported. NVidia emphasized that the tablet features no reskinning or OS customization; instead, the company opted for a native Android install with the "Shield Hub" application serving as a central shop. The Hub is effectively a glorified Android Market that lists compatible PC Stream and Android game titles, including those hosted on a Kepler- or Maxwell-powered PC.

NVidia takes pride in its compatibility with 720/24p Twitch streaming and ShadowPlay functionality, coupled with a front-facing 5MP camera for picture-in-picture streaming. If you'd prefer to use the 8" screen for portable gaming while retaining streaming ability, it would appear that the Shield Tablet is worth investigation. NVidia boasts 4K readiness for video playback and encoding, but it should be noted that the device is fully incapable of playing games at a 4K resolution. To clarify, this is because the Shield Tablet can export its display to a TV (or other display) with a higher resolution than the tablet's 1920x1200 host output. 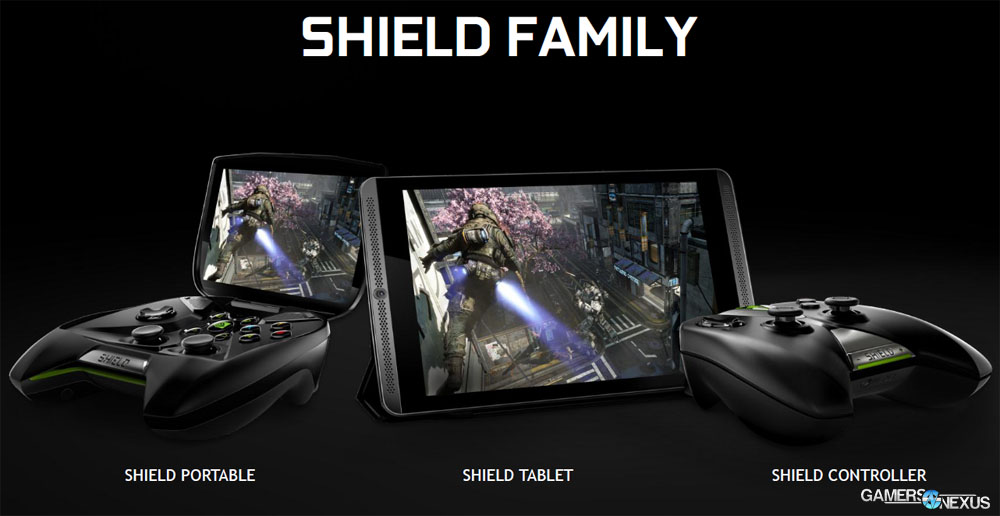 The tablet connects wirelessly to a standalone Shield controller (no screen) with a target latency of 10ms -- about 2x faster than most Bluetooth controllers -- and can stream about 24Mbps between the tablet and controller. The input is about on-par with an Xbox 360 wireless controller.

Two versions of Shield Tablet exist: a $300 MSRP version including 16GB of storage / wireless and a $400 32GB version with LTE support (additional fees from your carrier). A $40 cover (doubles as a "kickstand") is also sold by nVidia, along with a $60 wireless Shield Controller -- which is mostly the same as the Shield's controller layout. 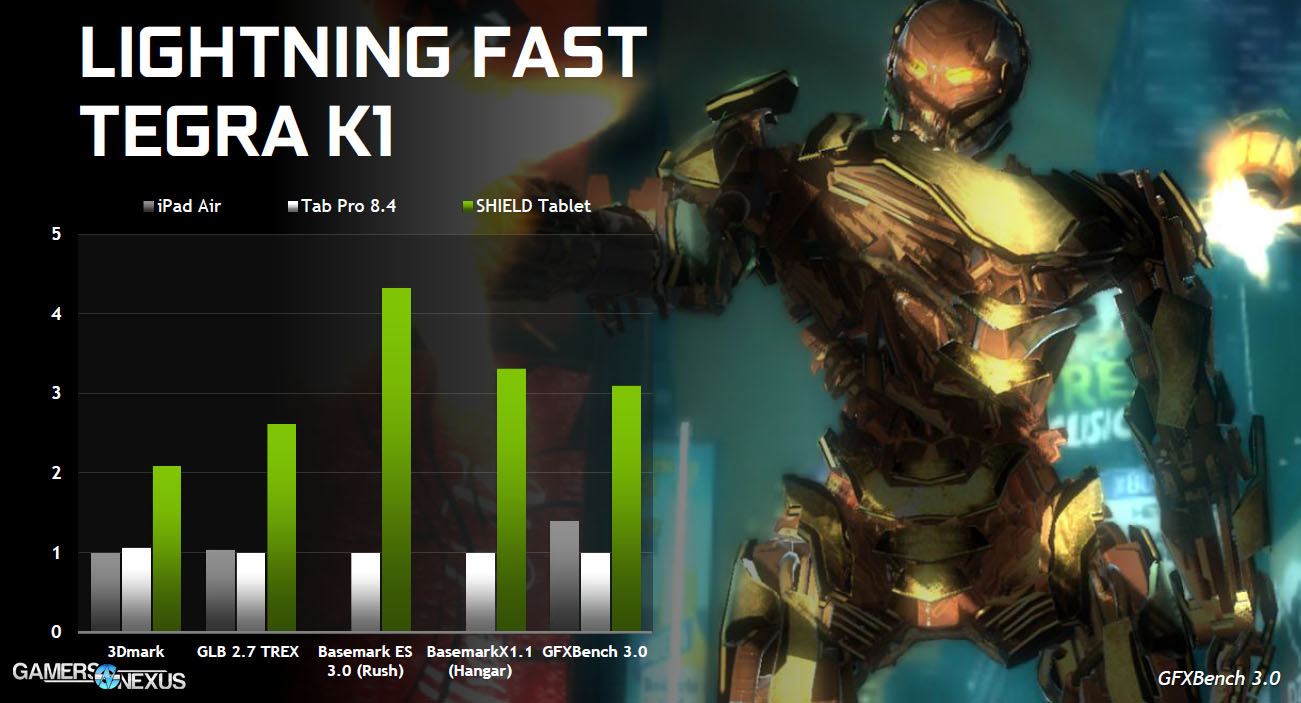 GN Staff Writer Scott Griffin joined me for this call, and in our brief discussion afterward, we both decided that it's a niche market. I'm just not sure that I can be convinced that I want a tablet like this -- but do feel free to tell us in the comments why you think it'd be a good fit for your gaming needs. Personally, I find tablets largely uninteresting. The artistic uses with GPU-accelerated painting are fun, but a professional artist would likely prefer to couple a GPU-equipped system with a high-end drawing tablet with greater pressure sensitivity. In that regard, I suppose it goes back to what I said earlier: It makes for a fun toy to play around with.

The take-away here is GRID. We've been talking to nVidia about GRID for a pretty long time now, but they haven't felt comfortable enough to show it publicly. This is sort of a quiet / soft-launch of GRID beta with an nVidia device. On-demand gaming has the potential to become a major offering from cable providers (and sites like Amazon, which already has GRID servers). NVidia's vision, as far as I can see it, is that gamers will plug an affordable Chrome Stick-like device (or this tablet) into their TVs, then stream a game on-demand from the service provider.

What about Maxwell, Damn It?!

NVidia still hasn't said anything about Maxwell since the initial 750 Ti launch, unless you count the 860M and other mobile GPUs. In fact, the GTC keynote entirely skipped Maxwell and looked strictly at Pascal and beyond -- something that surprised the murmuring press in the room.

That said, Maxwell does exist and is on its way. I have personally provided design input to a few different manufacturers on upcoming Maxwell cards and can confirm that something's coming -- it's just a matter of when nVidia is ready for a launch. We've seen some interesting boards so far.