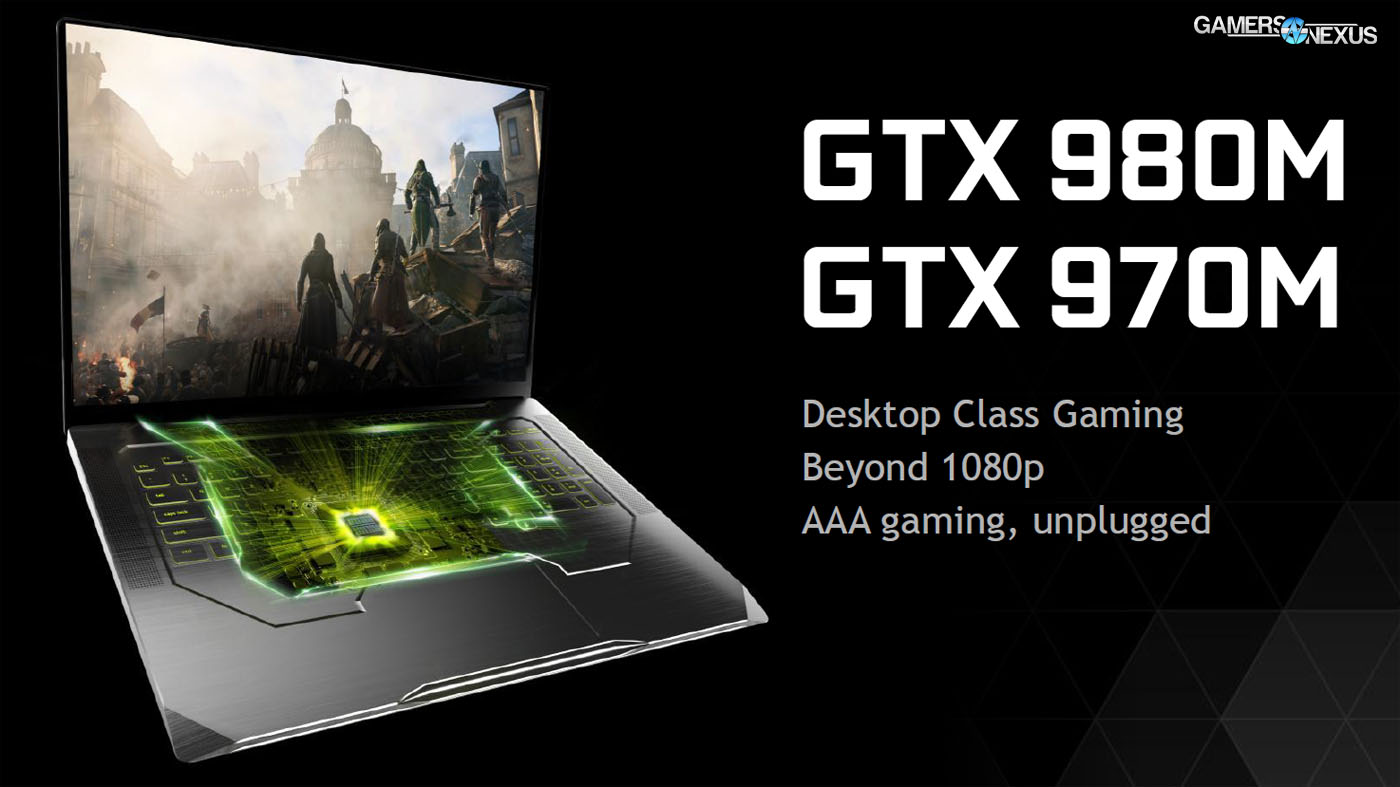 It feels like we've been linking back to our GTX 980 review relentlessly, and it's going to happen just a few more times this month. NVidia has officially unveiled its GTX 900-series mobile lineup, starting today with the 980M, and indicates a heavy focus on extended battery life when gaming at high framerates.

The news comes after a previous announcement of the company's “Battery Boost,” a notebook technology that eases off the GPU throttle more regularly when driving a portable unit without an AC drop to the wall. NVidia has had its scope on mobile gaming for at least a year now, but seems to be more serious this time; the company opened our briefing with industry growth trends, emphasizing that gaming notebook growth has expounded five times in three years. In light of this, the current leading graphics manufacturer presented the below image – “Closing the Gap” – and informed us that the GTX 980M would retain nearly 80% of the performance exhibited by the GTX 980 desktop video card. Considering that the GTX 680M was closer to 60% of the GTX 680's performance, the gains are noticed and large.

We don't have exact specifications for the mobile GPUs just yet, insofar as internals, but expect to be talking about them shortly. You'll see several new laptops launched today alongside the 900 mobile series, including units from MSI, Origin, and other manufacturers. 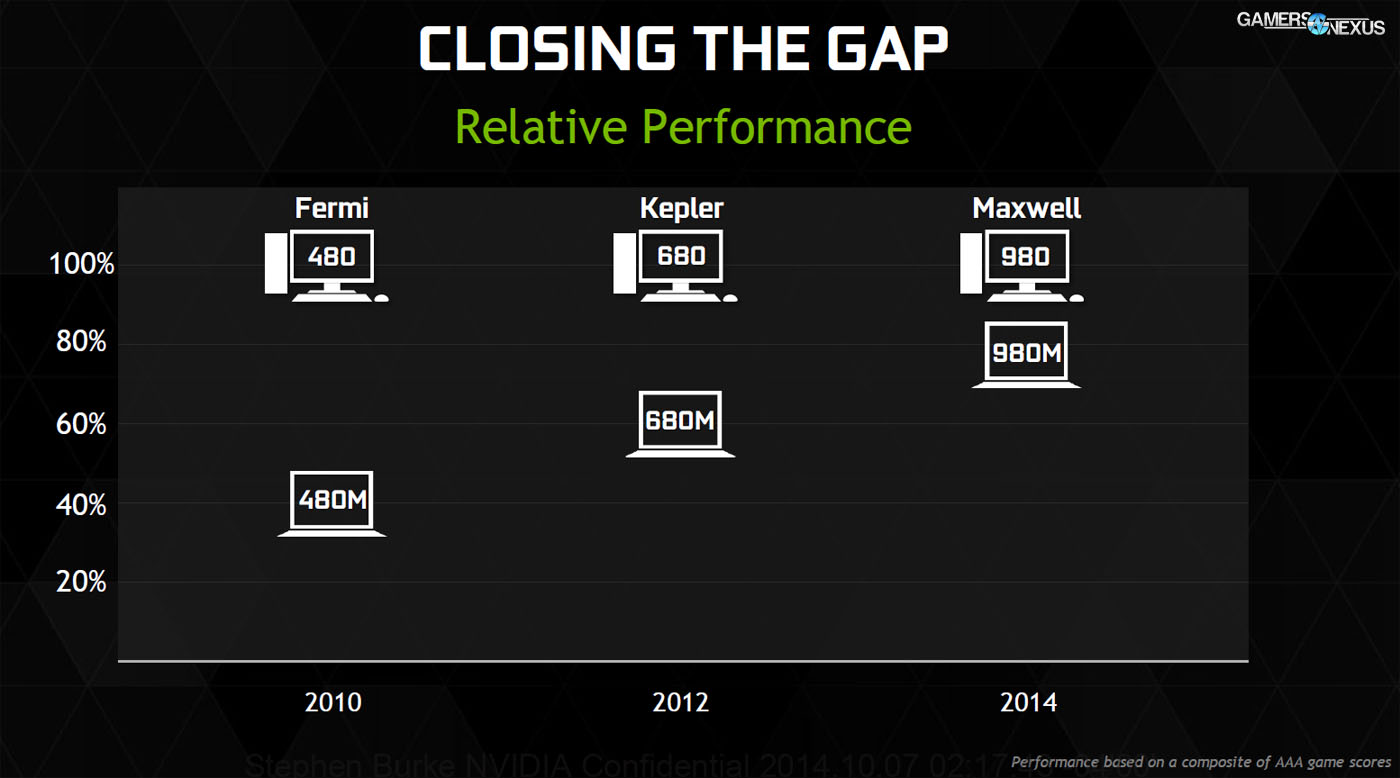 The GTX 980M offers all of the same technologies we discussed in our GTX 980 review, including DSR (Dynamic Super Resolution) and FXAA. As a very quick recap, enabling DSR will render game graphics at 4K resolution, then filter the images down to the native display resolution. This produces crisper output at the cost of 4K demands. FXAA is a more efficient form of MSAA, effectively combing multiple frames (instead of one) for anti-aliasing, splitting the workload in half.

Despite Maxwell's impressively low TDP, any mobile gaming is always going to drain a laptop battery at a rapid pace. We were told that “typical GTX 980M notebooks” (without knowing CPU specs – likely an i7) would draw 230W of power when plugged into the wall, but need to draw only 100W when on battery to extend life. That's where “Battery Boost” comes in, which will actively throttle the GPU in (hopefully) unintrusive ways. 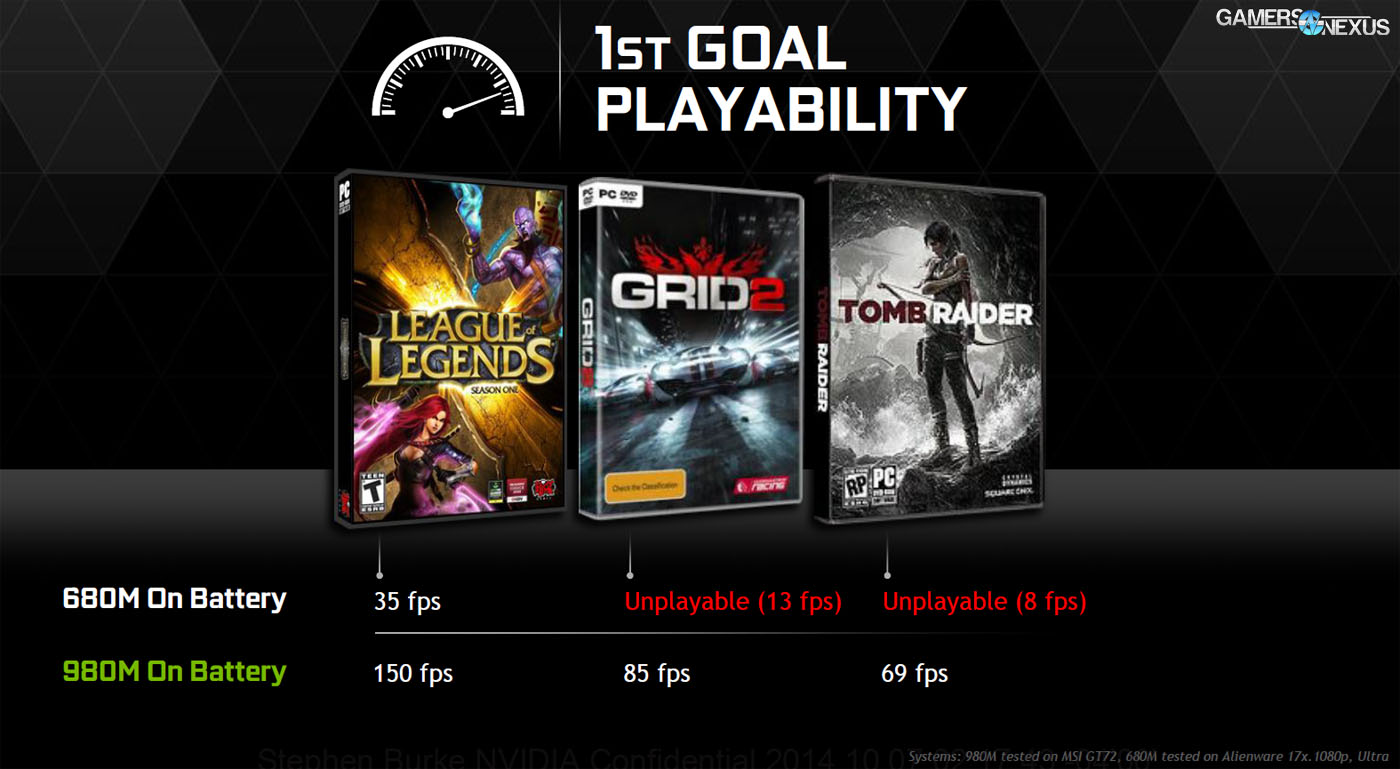 As seen above, the GTX 980M pushes 85FPS in GRID 2 when on battery and lasts approximately 102 minutes, a ~30% gain over the non-battery-boosted GTX 980M. Relative performance to the GTX 680M can be found below. 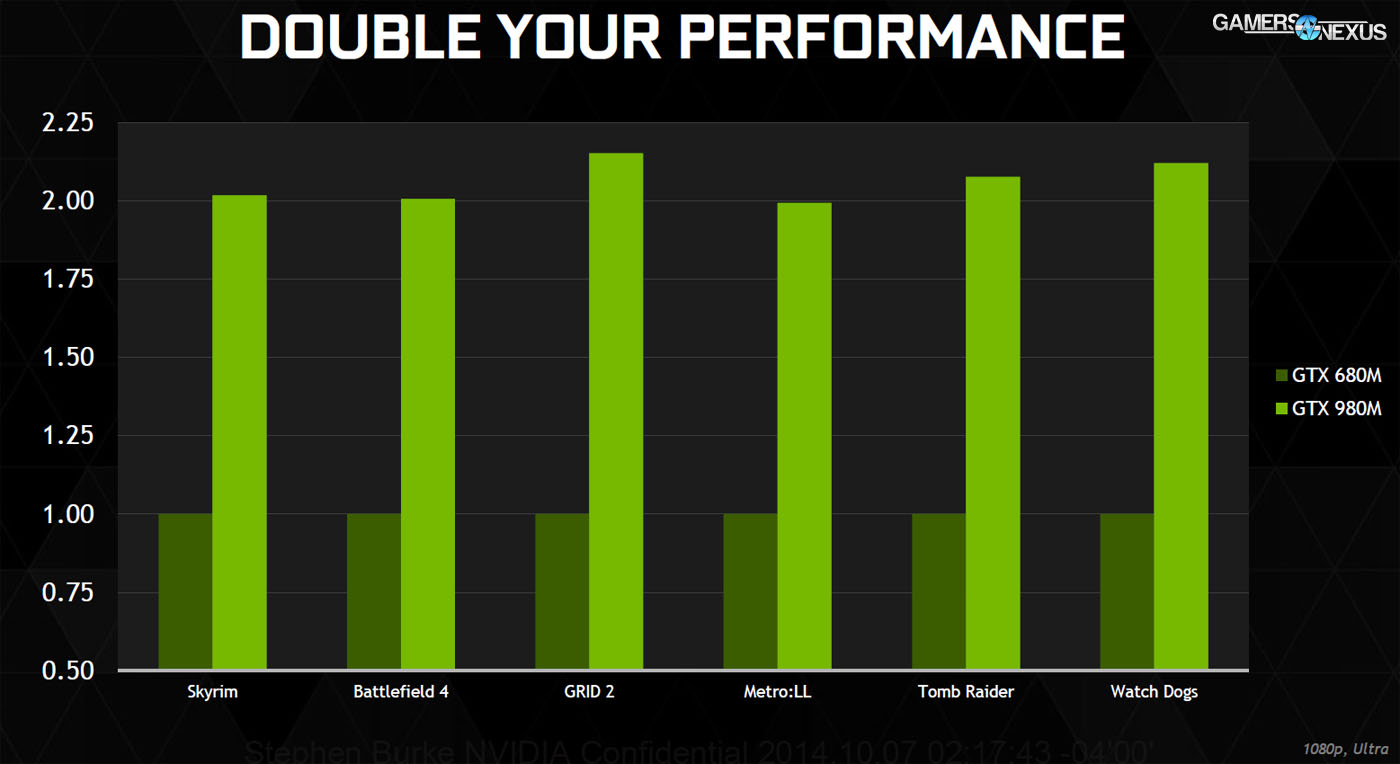 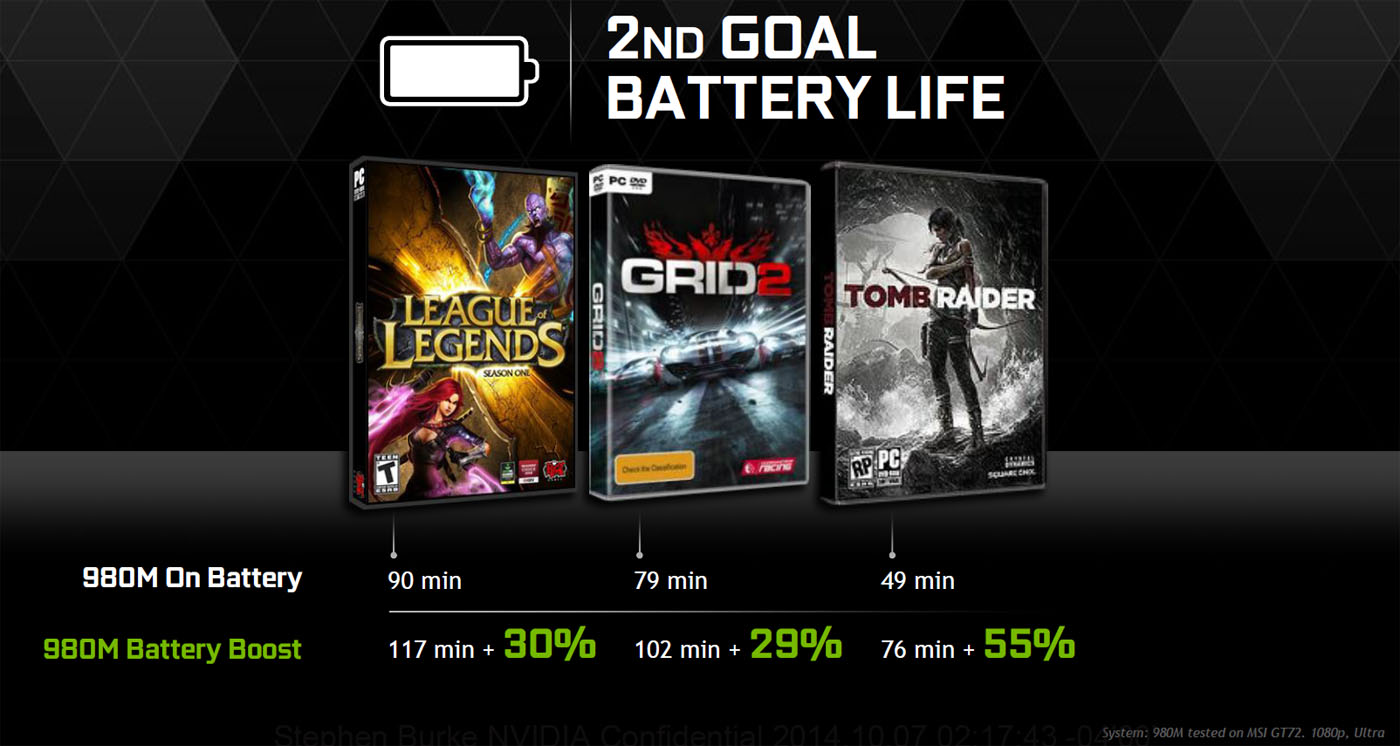 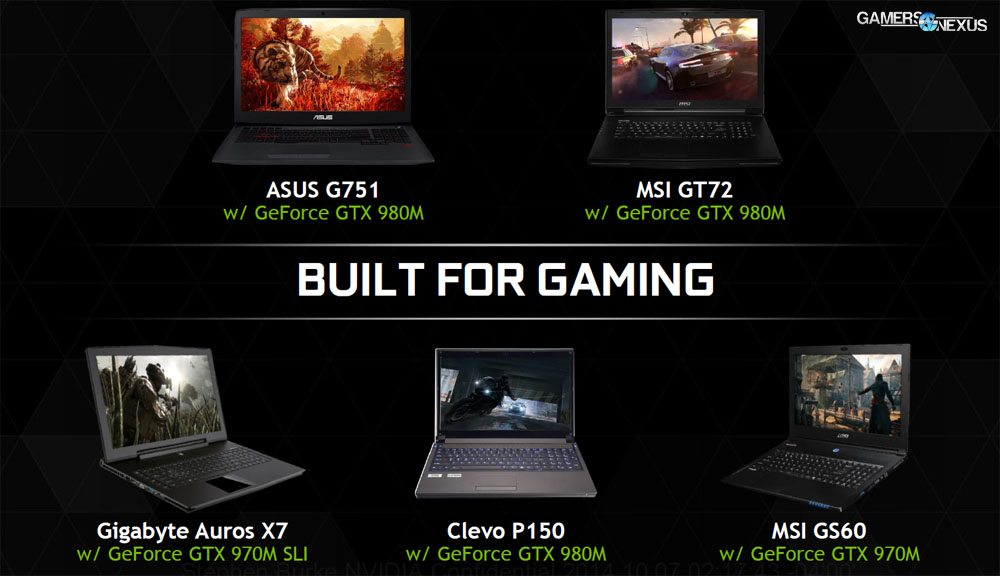 We don't yet have test units, but are expecting some from various manufacturers in the coming weeks, whereupon we'll develop absolute test values for FPS.

The 980M is expected to output at 25x14 resolution on Ultra settings inmainstream titles.

If all goes as planned, things are looking good for gaming notebooks. The gaming laptop market has long been regarded as “desktop replacement units” by the industry – including by manufacturers where I once worked – and that has been correct until recently. Lower TDP developments by all three major semiconductor engineering groups have yielded smaller, more portable laptops with longer gaming battery life. Lower TDP means lower heat generation, part of what allows the smaller size.