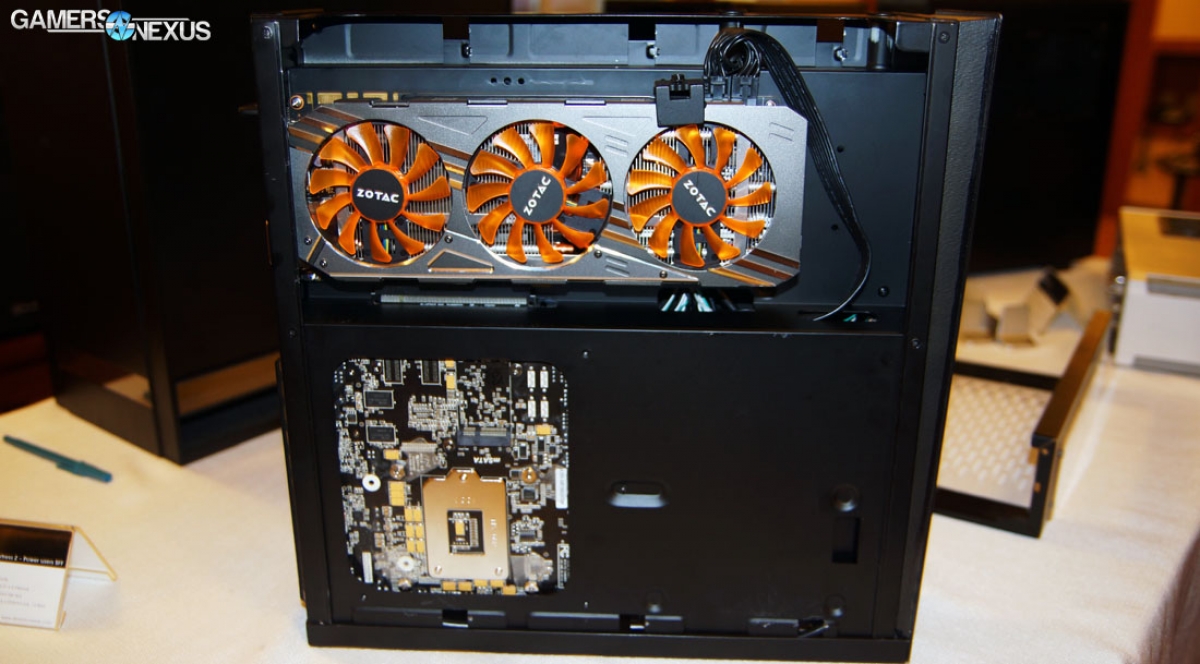 We've routinely been impressed by SilverStone's CES showing. Last year saw the exhibition of the jointly-designed SilverStone / ASUS XG02, an external GPU enclosure that garnered significant attention on our YouTube channel. This year's item of interest is the company's Raven RVZ02, a mini-ITX enclosure built to showcase the CPU cooler and video card heatsink.

Given the propensity of board partners to pretty-up VGA face plates, a front-facing video card mount allows for proper showcasing of a gaming system's most critical component. The RVZ02 makes use of a riser card PCI-e extender to bend the angle of installation for the graphics card, facing it outward from the left side panel. The motherboard is mounted facing the right side panel, exposed on the lower side to spotlight the CPU cooler behind a clear window. SilverStone's riser card should bypass some of the latency issues exhibited by ribbon cables, limiting delay to a point of near irrelevance when measuring GPU performance.

The side panels of the RVZ02 mirror one another and can be installed on either side, minimizing a bit of the user's workload when assembling the system. To this end, the company furthers its practical approach to installation by using plastic clips for mounting of slim optical drives and its 2x2.5" SSDs, which get snapped into place underneath a screwless SSD cage. At just 60mm of clearance, CPU coolers have to be low-profile air solutions and have minimal room for error. SilverStone used one its own AR06 ($40) 58mm tall CPU coolers to maximum effect in its demo system, just barely clearing the 60mm maximum height requirement. 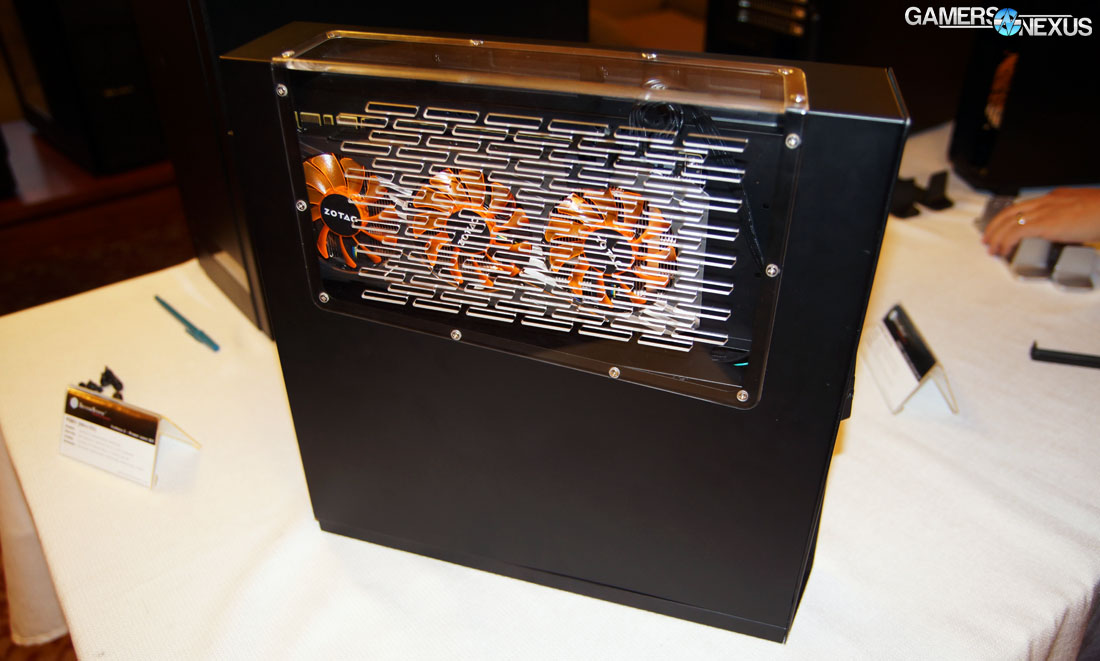 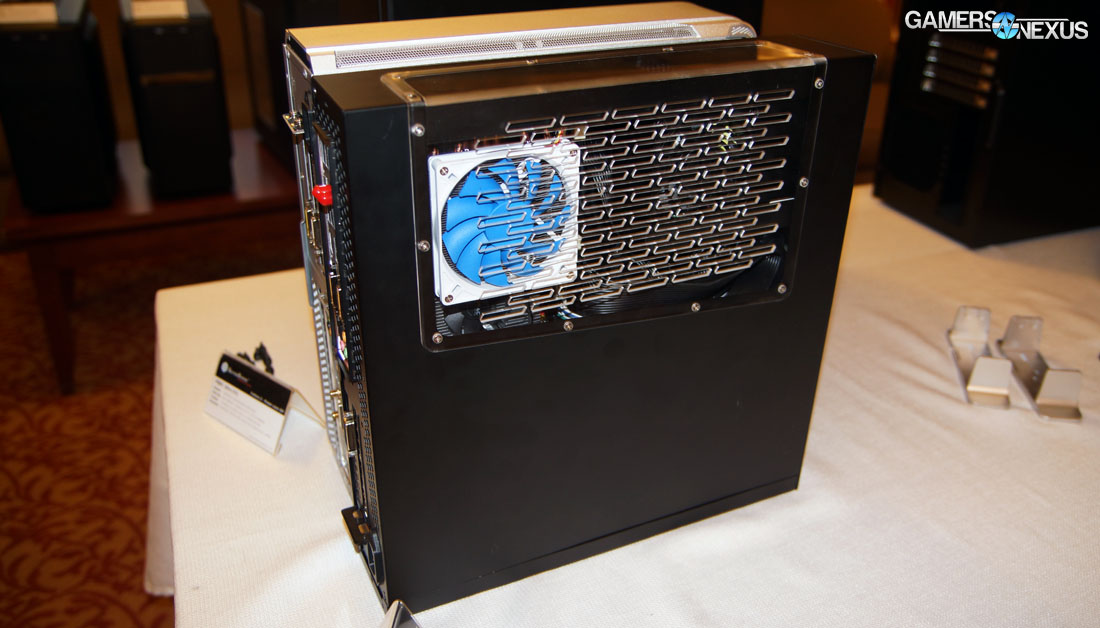 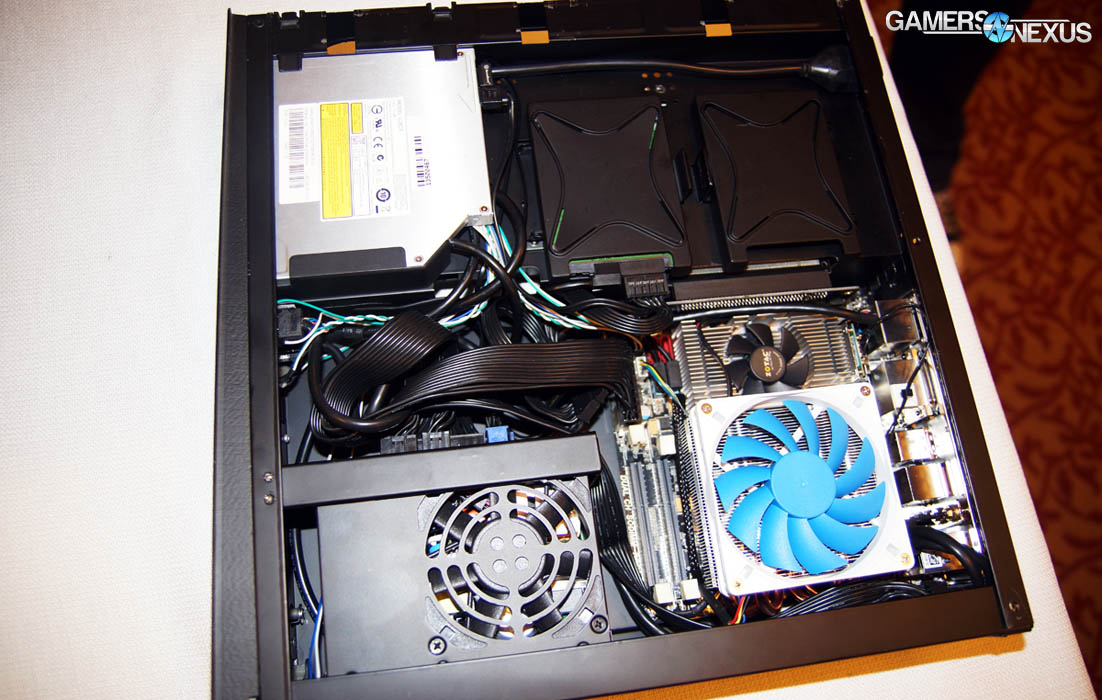 Once installed, the CPU cooler will host the only fan in the entire enclosure. The RVZ02 ships without fans pre-installed and hosts no fan mounts, given its restrictively small size in all dimensions. If cooled with a high-end, low-profile CPU cooler, the RVZ02 should run cool enough to support most HTPC builds running Intel Pentium and i5 processors (or the i7 Broadwell processor, which should run at around 87W TDP). AMD APUs could also work in such a case, such as the new AMD A8-7650K that we posted about.

SFX PSUs are required for the RVZ02, though SilverStone's impressively high-performing SFX solutions make the restrictive form factor support a non-issue. A 450W 80 Plus Gold SFX PSU can be had for $95, making an ideal unit for low-TDP HTPC builds.

Externally, the enclosure hosts the classic Raven logo with beak-like angularity on the front panel, sliding on rails to conceal the front I/O. The sliding hardware shines an LED out of the bottom, softly illuminating the front of the case.

The Raven RVZ02 is anticipated for full launch "sometime before Computex" (that'd be June) at "less than $85."

We've grown difficult to impress with cases. CES this year wasn't particularly exciting for affordable enclosures, but we're excited by SilverStone's RVZ02 and I'd be a buyer for my own HTPC. The RVZ02 shows that SilverStone is still one of the most innovative case manufacturers in the market, up there alongside the likes of In-Win and NZXT. SilverStone's Raven RVZ02 is brilliantly designed, makes efficient use of space, and is priced somewhat shockingly low.