The QBX aims to be the de-facto mITX case for providing a small form factor while allowing for an excessive range of component selection. The Cougar QBX allows for up to 350mm graphics cards, meaning that most graphics cards, even with aftermarket coolers, will fit without issue. The QBX also supports up to 105mm CPU coolers -- a limited height, but options exist from Thermalright, SilverStone, and CLC makers. Furthermore, the QBX supports normal PS2 ATX power supplies up to 140mm, which will help broaden component options as we won’t be limited by a small form factor PSU, such like in the Silverstone Raven RVZ02.

Only mITX motherboards are supported. Minimalism seems to be the general theme behind both the style and design of the QBX. Looking at the inside once again, we see that up to 7 fans are supported (with one included), although one of those is 90mm, and another 80mm, both of which have less options for fans (and more noise) than 120mm fan mounts. The QBX also allows for the use of a 120mm radiator with a 120mm fan or a 240mm radiator with a single 120mm fan. It also has 1x3.5” HDD bay and 4x2.5” SSD/HDD bays. There are two included fan filters to help prevent dust buildup in the Cougar QBX. 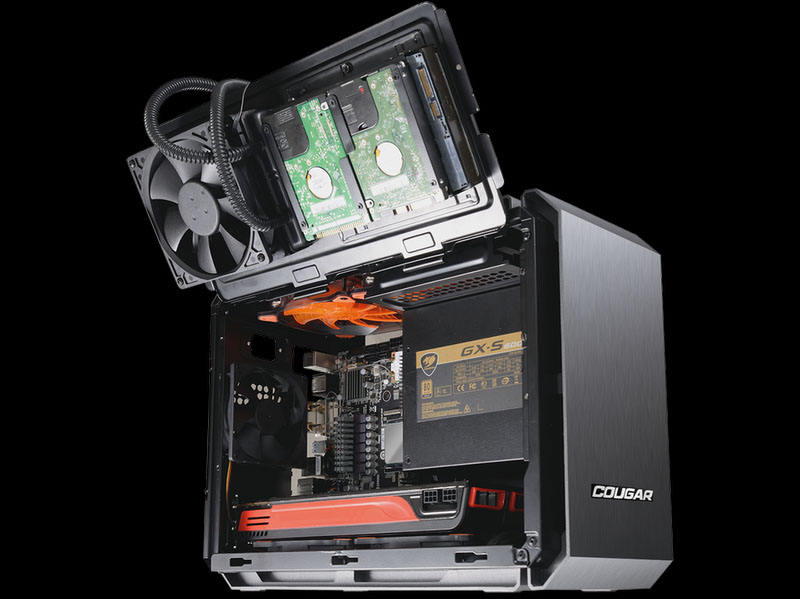 With room for a large amount of hard drives, fans, and even some watercooling options, the QBX looks to be a decent foray into the mITX case market.

The Cougar QBX will be available starting in late April.