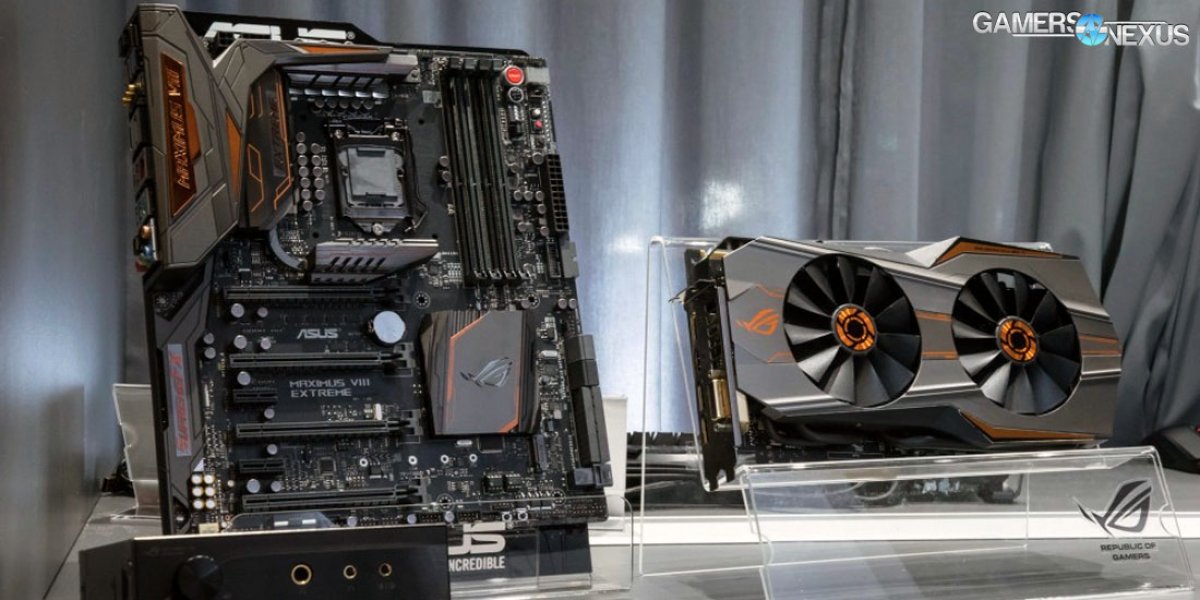 The Z170 ROG Maximus VIII Extreme/Assembly – we’ll shorten that to Maximus VIII Extreme – features a new copper-and-black color scheme which, in my opinion, is a large improvement over the black and “gold” color scheme that Asus ASUS began with Z87. It features 10Gb/s ethernet, a large power phase design, and improved audio solutions. The Maximus VIII Extreme uses an ESS ES9018K2M digital-to-analog converter (DAC) with two Texas Instruments LM4562 amplifiers and a TPA6120A2 amplified “to drive high-fidelity headphones.” The inclusion of three amps is a bit odd, as generally only one is used in motherboards and audio setups. Other than this, the Maximus VIII Extreme includes a beefy CPU VRM that is partially hidden, but looks to be 12 phases. The board appears to have 4xPCIe x16 and 2xPCIe x1 slots, although to what extent they are wired is hidden. Other than this, the Maximus VIII E has the other normal features, like 4xDDR4 slots and a selection of SATA ports.

ASUS has debuted their ROG Matrix 980 Ti Platinum. This uses the sammer copper and black color scheme as the motherboard, employing a similar style as their other Strix GPU coolers. ASUS claims that due to its Wing-Blade Fan Design, it runs 25% cooler and three times quieter. The Matrix 980 Ti Platinum uses Super Alloy Power II components, which should result in better reliability even when overclocked. It also has Memory Defroster, which defrosts the ASUS Matrix 980 Ti Platinum’s memory for using sub-ambient cooling (like LN2 or dry ice). There is also a one-click Safe Mode that restores VBIOS to its original settings, just in case someone gets a bit zealous when overclocking.