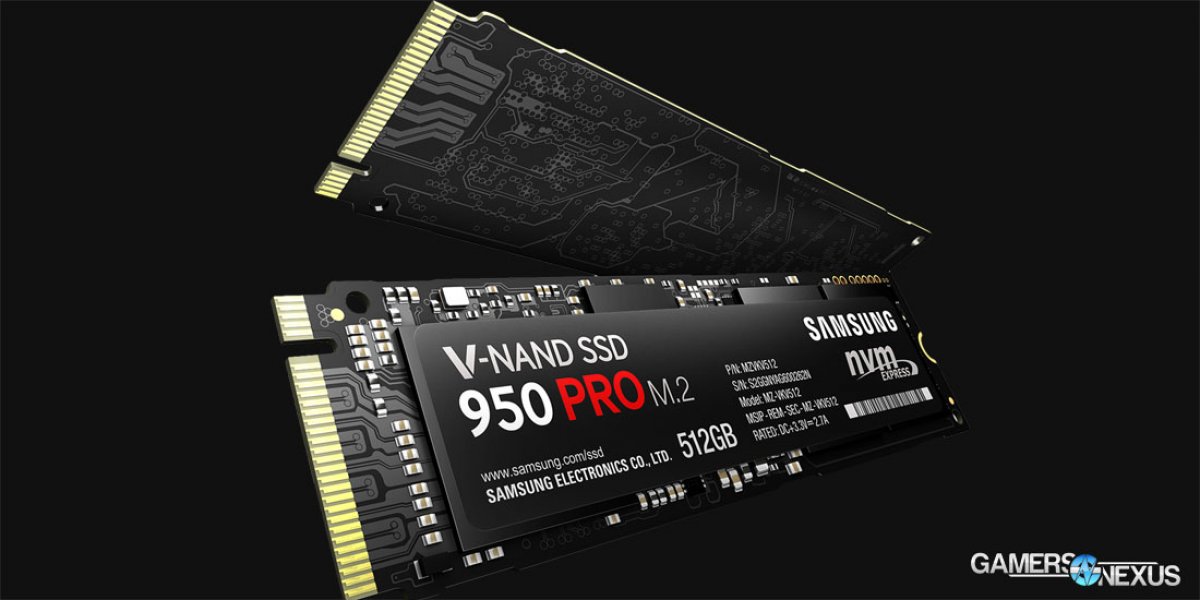 The new 950 Pro M.2 SSD sees utilization of the new VNAND on the fast M.2 interface, which is fueled by PCI-e lanes to exceed limitations on the SATA bus. Samsung claims that its new 950 Pro M.2 SSD is capable of operating at 2.5GB/s / 1.5GB/s (read/write sequential rates), which surpasses the data throughput of the HyperX PCI-e SSD we recently reviewed. This is partly because of the 950 Pro's move away from AHCI and into NVMe (Non-Volatile Memory Express) and usage of the PCI-e 3.0 x4 interface, ensuring the device is the only true bottleneck in the pipe. Four lanes of PCI-e 3.0 provides approximately 1GB/s throughput per lane (985MB/s per lane, or 3.94GB/s theoretical max throughput on x4).

The prevalence of M.2 slots on modern motherboards means that enthusiasts should begin seriously considering an M.2 SSD for maximum speed; it's not game-changing for gamers, but has use cases applicable to production users who throttle on storage (like those performing rendering tasks). Lacking an M.2 slot, PCI-e adapters exist for M.2 SSDs to go through an expansion slot port.

Of the drive, Samsung states:

“The drive was built to last, with AES 256-bit Full Disk Encryption to protect data and Dynamic Thermal Guard, which can protect the device and data in inclement weather from 0 to 70 degrees Celsius. It can also withstand physical shock of up to 1500G/0.5ms and vibrations up to 20G.”

This is a professional class drive that would do best in production or business machines, with enthusiast advantage primarily relegated to bragging rights. Users who do video production or rendering would also benefit from the mitigation of the storage bottleneck.