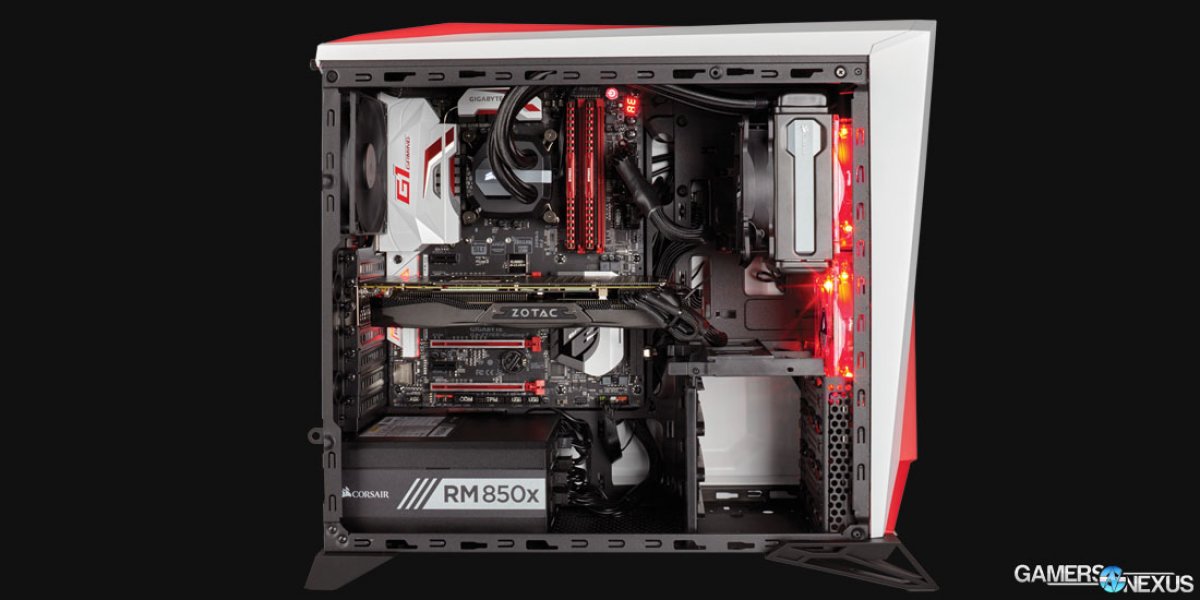 Our team has already landed in Las Vegas for CES 2016 and, over the next week, we'll be posting video and written analysis of new products from all major manufacturers. Corsair's announced some of their new items ahead of meetings, to include the Spec-Alpha gaming PC case.

The Spec-Alpha ships in gray-on-black and red-on-white finishes, making ample use of jutting angularity and bezels on top of bezels. Part of the front panel is mesh-covered, the other covered by usual case plastics, and the entire enclosure sits atop black feet (which look a bit out of place for the white and red case).

Cooling is done using 3x 120mm fans for what Corsair calls “Direct Airflow Path cooling” – which we think just means “the fans aren't obstructed by hard drive cages.” Two front-mounted 120mm fans draw intake from the front meshing, one of which is aligned with the VGA cooler and one with the CPU cooler; a third fan spits exhaust out the rear, from its usual rear-top position. Three-speed fan control is available through usual switches and power management.

No optical drive cages are present, either – a part of the “Direct Path Airflow” language – and marks a further nail in the coffin of physical media. We've previously endorsed attempts at moving away from CD/DVD drives, as done on the NZXT H440 and NZXT S340, as external media readers get the job done when truly necessary. This decision by Corsair to drop bulky drive cages is agreeable.

Front radiators are supported at 120mm and 240mm, for CLC users.

Direct Airflow Path Cooling isn't the only marketing text accompanying the case, though; it's also got a “panoramic window,” which is a square and smaller than Corsair's other windows. That's not to downplay the market potential of a product we've not yet been hands-on with – but it really is just a “window.” As our regulars know, we're fairly no-nonsense about this sort of stuff.

That stated, the window is bezeled outward to allow additional CPU cooler clearance (and probably some flair). We don't yet know specific clearance numbers, but will hopefully be able to report on them once we see the case this week.

Corsair has another case coming out this week, but we'll save the rest of Corsair coverage for our meeting on Tuesday.