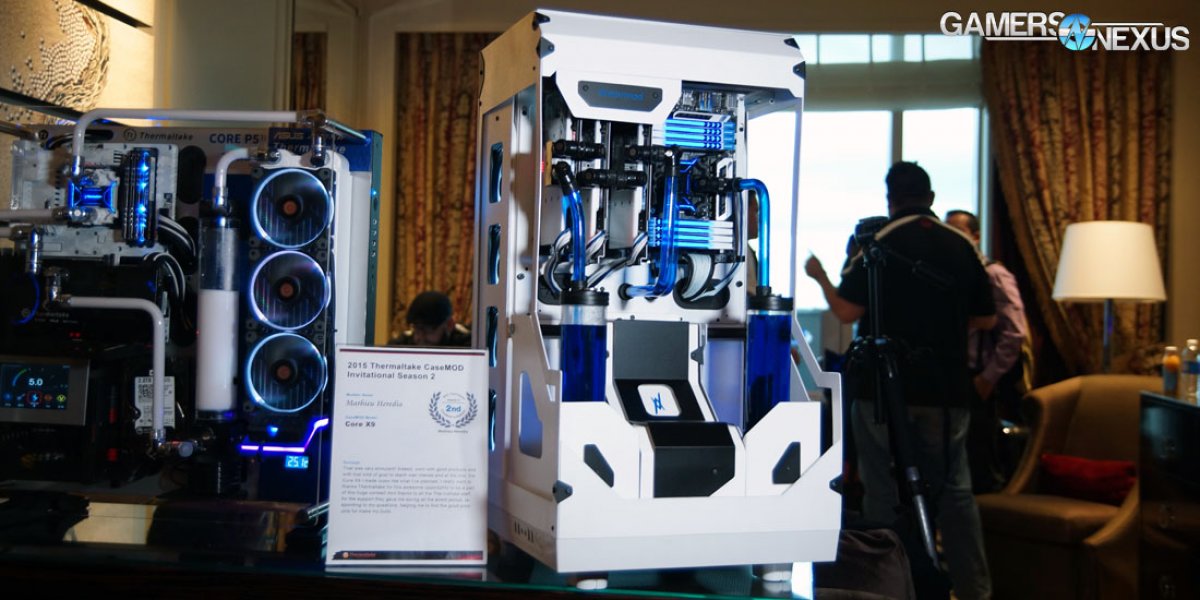 Thermaltake greeted us this year with a steel tank packing two mini-guns. It was the winner of the X9 modding competition and was created by Jesse Palacia, a case modder prolific in the Dirty South PC Mods group on Facebook. The Core X9 was hardly recognizable as the top had been cut down at about a 45-degree angle and the side panels had been sawed through and made into hinged, steel covers. Even though the mod wasn't currently powered, it was still eye catching.

Right behind the Unmanned Tank mod was the runner-up, the Watermod by Mathieu Heredia. Heredia chose to chop the X9 at about the same angle as Palacia did, but the Watermod is standing on its front panel instead of its normal footing. The case reflected light brightly, its vibrant white-and-blue mixing brilliantly. Besides using white fluid to match the white/blue paint job, the mood is best set by the mod's cathode-lit memory modules. The modules are made by Avexir and branded as Raiden, making reference to the mortal combat character.

Just to the left of the Watermod was Themaltake's own build in the Core P5. In case you missed its release back in October, the P5 is a wall mountable platform case with a large glass panel as its front cover. The case comes with a set of both horizontal rubber feet and vertical stands for instances where it'd be better suited for a desk. 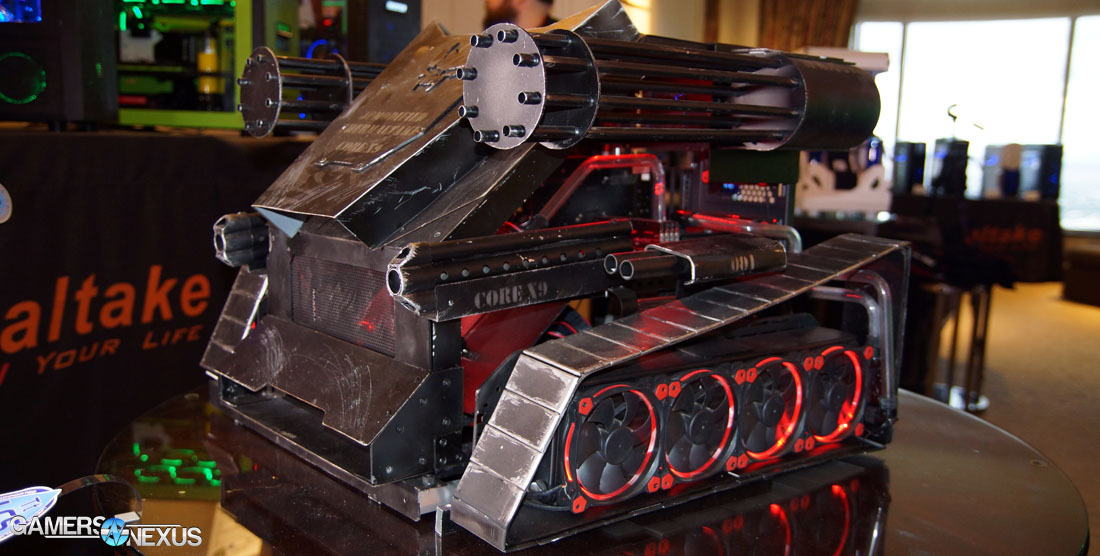 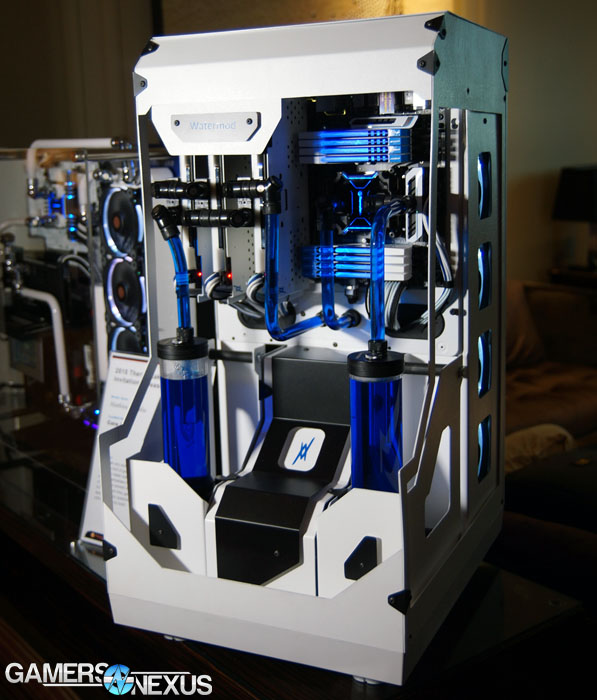 The first of three major, new releases by Thermaltake's CES showing was its Core W Series of cases. It's the newest addition to their recently debuted Premium line-up of cases. As these large cases are part of Thermaltake's premium line they have been badged with the newly squared TT logo. Preorder on the flat-packed, build-it-yourself cases started this week with expected delivery in late February/early March. 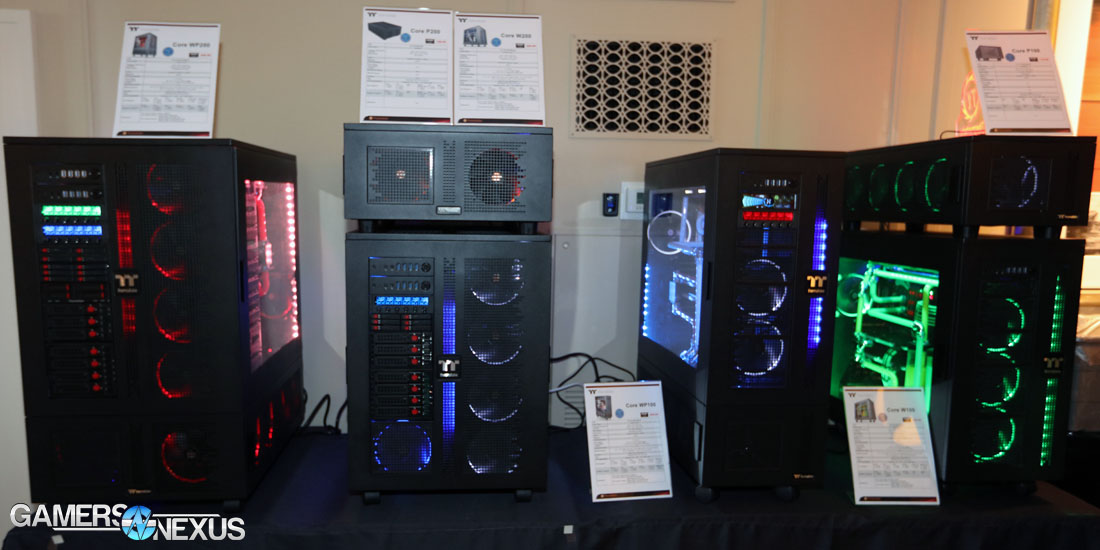 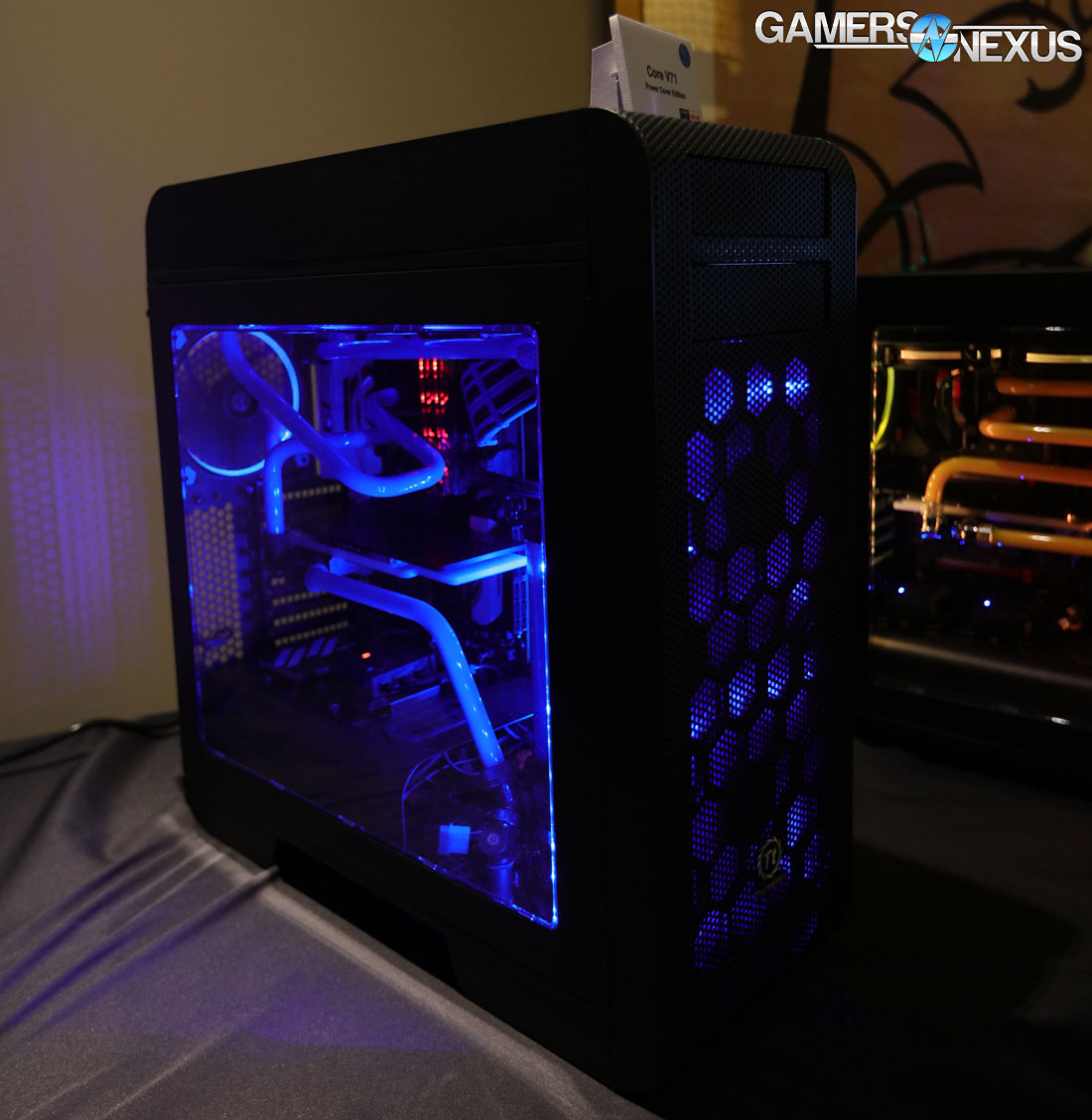 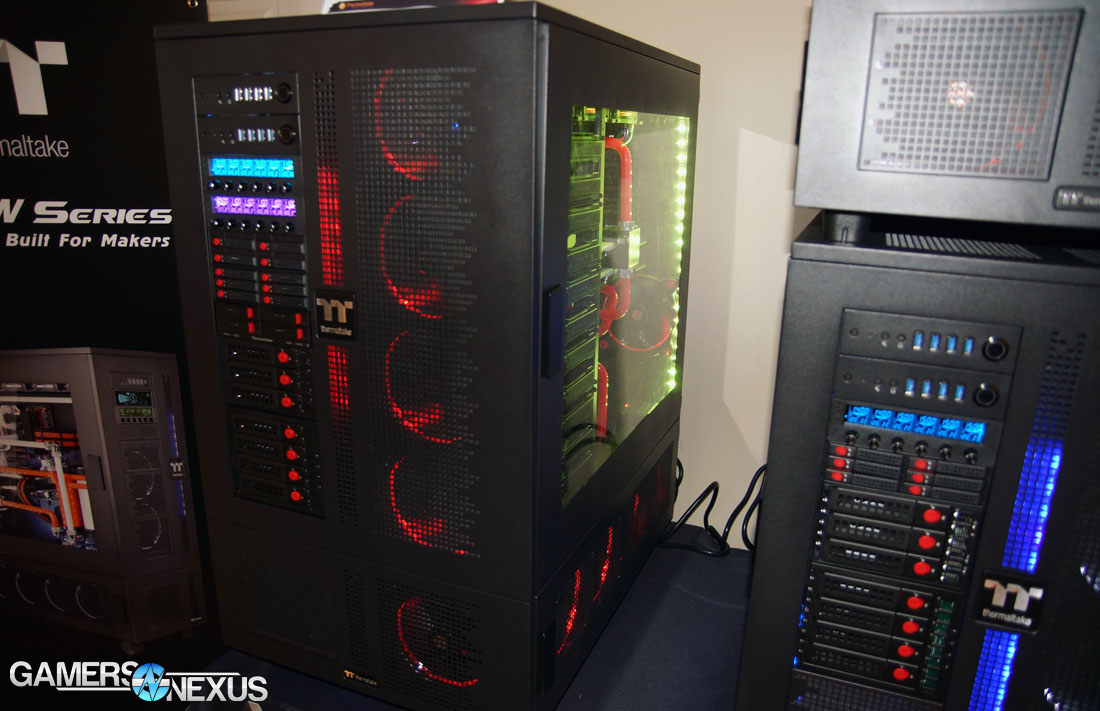 It's a two part system: pedestal and case. The pedestal, or P100, is built to house power, cooling, and storage. The main part of the system, the W100, can be purchased stand-alone and has the facilities to accommodate an entire build. If, for some reason, one system isn't enough, then there is also a 200 line of the series that doubles the width of both the P and W parts.

The X71 adds a lower chamber to the X31 for more cooling and to move the PSU away from the motherboard. Its introductory price is $150.

The final of the new realeases are the Riing RGB 12 and 14 fans. Their multicolor LEDs can produce 256 colors. The fans use a hardware controller – there is mercifully no software control at all – that has three buttons: speed, play/pause, and mode. The mode button cycles through red, blue, white, green, mulitcolor, and disabled. If the play/pause button is pressed again while in multicolor mode, it stops on that hue and keeps the color memorized, even when the unit is powered off. The speed button simply alters fan speed based on user preference. 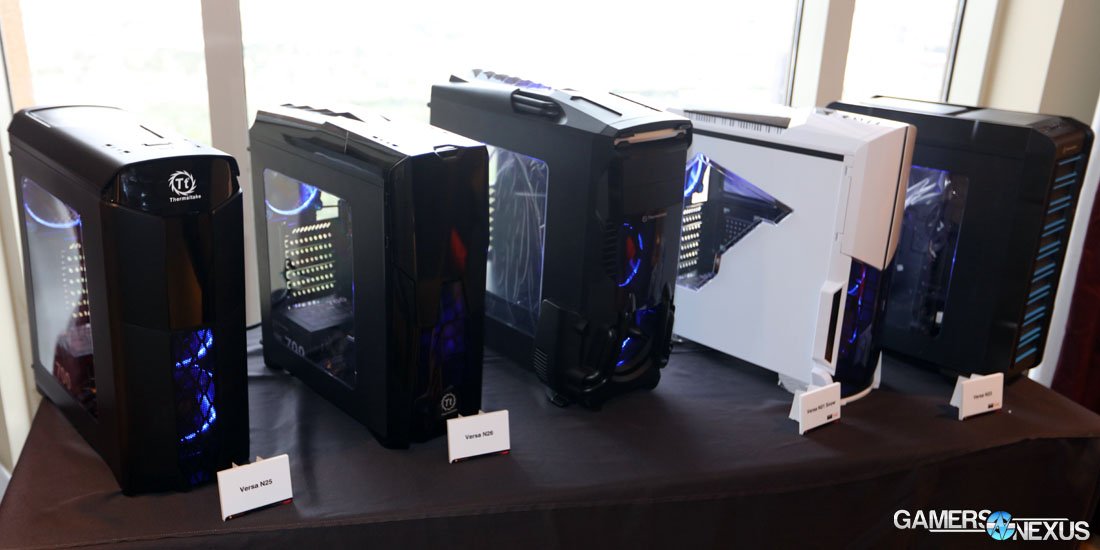 There were also several interesting renditions on previously released hardware. The Core X5, for instance, is a shorter version of the X9. Like the X9, it is specifically designed for horizontally-mounted motherboards, but in this case, the board will be mounted left-to-right instead of front-to-back. The alteration came about because of customer feedback stating that they liked the X9 but its depth was too much.

The less expensive Versa line up may be getting a new edition as well. On display was an unnamed case with no pricing information. The design seemed jet-inspired with the front cooling fans sitting behind what looked like a jet intake and a helmet visor. There was molded platic piping on the lower parts of the front and an angled set of fins on top. We're not even sure this case will come to the US market, but we'll put out an update if we learn more.

In the liquid cooling space, a new line of opaque fluids made in Germany was introduced to Thermaltake's offerings. The fluids have strong reaction to the type and intensity of light they are under and can be used to create just about any color desired.

There weren't any really exciting products in the Thermaltake suite, in terms of what's getting sold in coming months. We're still seeing the same basic design in the Core series. The manufacturing of the cases appears very similar to what is already offered, and the same idea of stacking is being redeployed. We'd like to see something a little more innovative from the company, not just the modders.

That stated, Thermaltake is easily one of the most vocal (and material) advocates of the case modding and enthusiast community, and for that, tremendous recognition is deserved. Case modding is getting big and serves as a structural support for the overall DIY segment, representing our best interests and efforts for the 'mainstream' event goers.