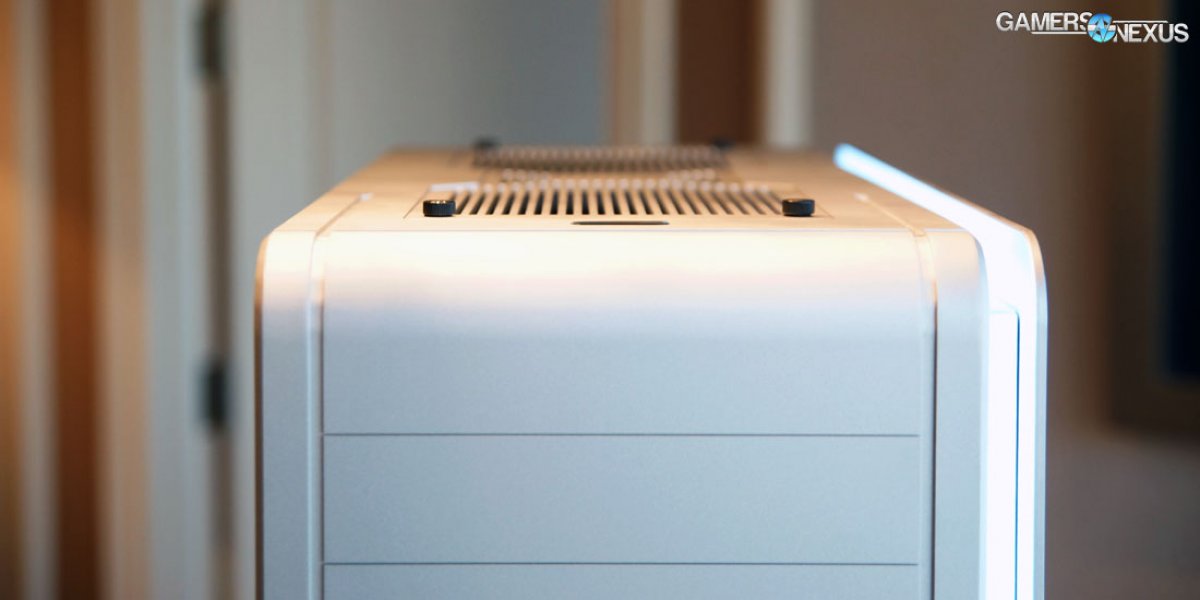 The biggest new product in the Phanteks suite is still a work in progress. At the moment it's being called “Project 916” or, as noted on the back of the name card, the “Primo Pro.” The design has deep channels along the outside that mirror the other Primo series cases, but P916 adds more LED lighting, thick aluminum and steel, and tempered glass that separate it from the others.

The chassis is built from 0.8mm steel for rigidity and the panels are made of 5mm aluminum (learn about case tooling here). The exception is the left side panel, made from equally thick tempered glass. Project 916's interior is designed to accommodate up to an E-ATX and mini-ITX motherboard at the same time. In order to power the simultaneous systems, there's room for two full ATX PSUs. The PSUs sit in the lower two of three separate chambers. The upper chamber, where the motherboards are housed, is about 70% of the internal space; the lower and back-side chambers make up the remaining 30%. The lower chamber is exposed to the left side panel, as is the motherboard chamber, but is compartmentalized to house power, drives, and cooling. If this chamber is being used for cooling, it can support up to a 480mm liquid cooling solution. The remaining back side chamber is big enough for a PSU, SSDs, and cable management. 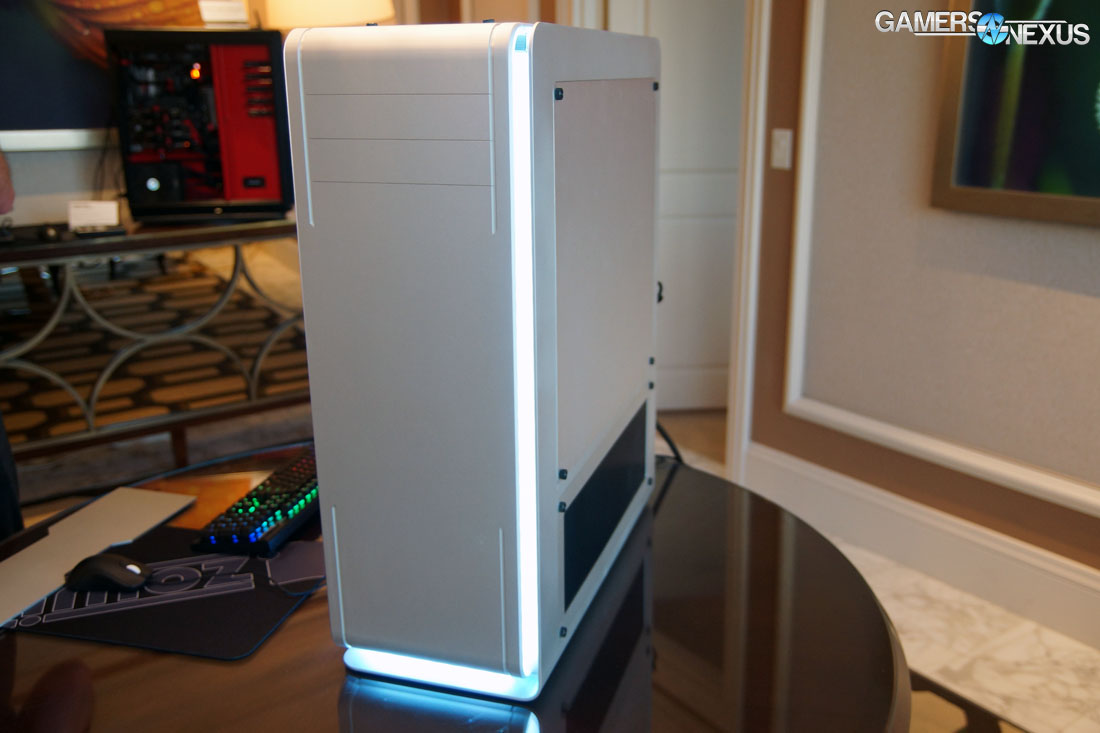 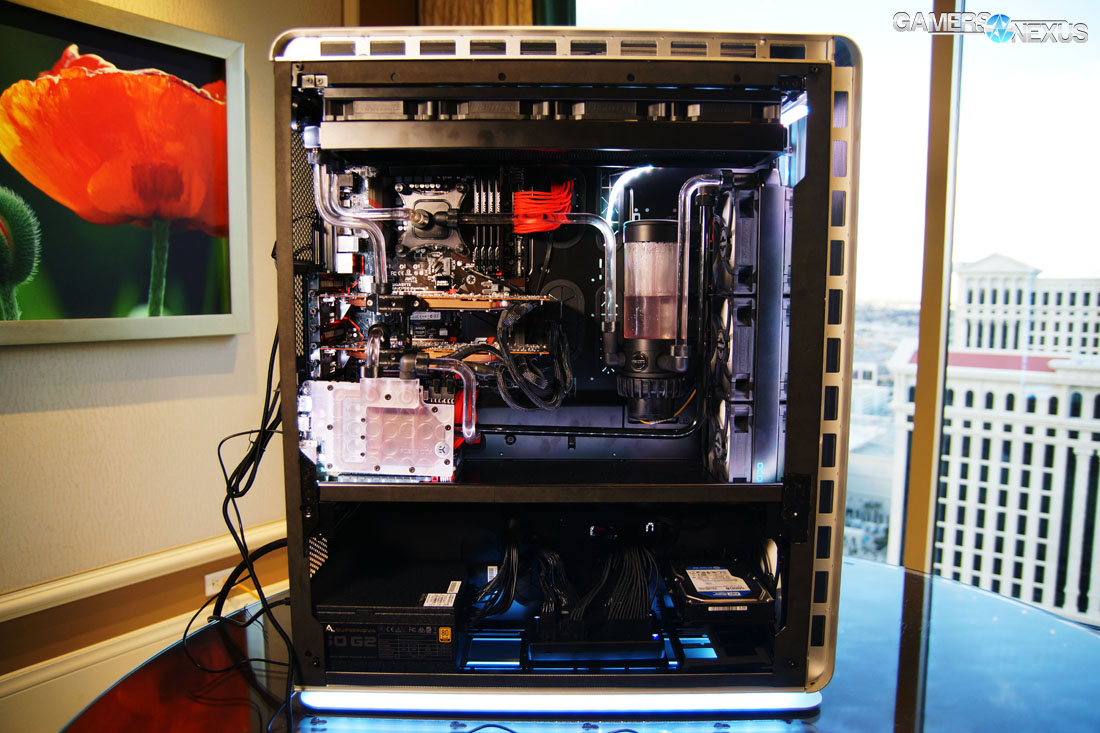 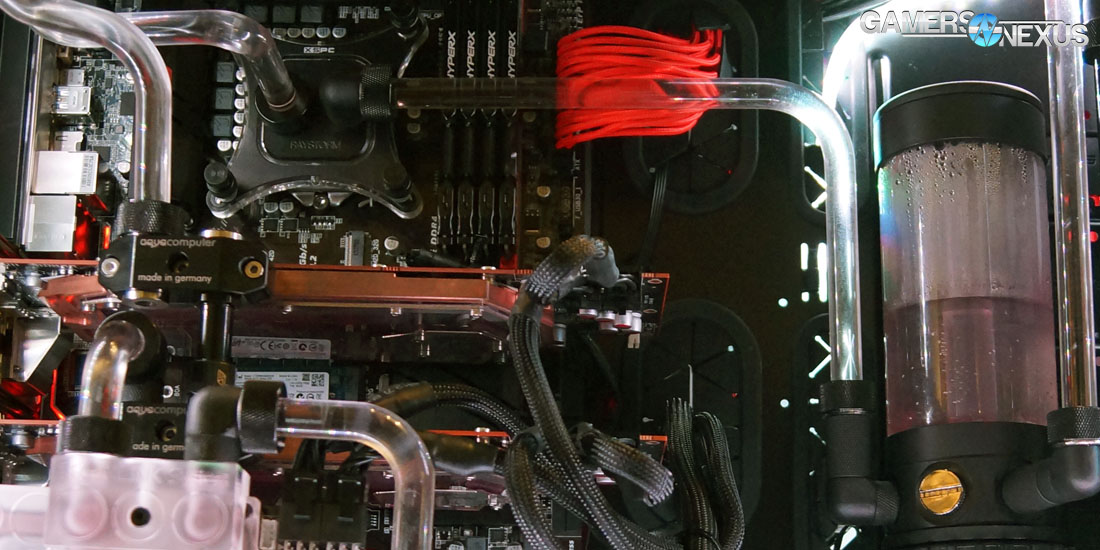 Liquid cooling can also be installed in the upper chamber (top-mount) from 480mm and smaller. The frontal liquid cooling solution is still a work in progress. The Phanteks representatives working with us shared that the company's desire is to fit a 560mm radiator in the front, but there's no guarantee that'll happen; front tooling isn't finalized at this time. When asked about launch information, Phanteks said that there are hopes of the case being as low as $400 and releasing around Computex 2016. With aluminum that thick, it's not going to be a cheap case -- $400 is a fine target, if perhaps unachievable. Project 916 is reminiscent of In-Win's work but is definitely a Phanteks Primo series with its focus on dual systems.

Following on the heels of the Enthoo Mini-XL Dual System (DS), the company is going to launch what will now be a third DS. The Enthoo Primo DS aims for March availability and is a variation on the current Primo, with new ITX brackets and a GPU mount that puts the ITX system's GPU in a prominent display position. The enclosure also includes the relatively new Power Splitter that debuted in the Mini-XL DS, alongside a separate set of front I/O that slides into one of the 5.25" bays to interface with the mini-ITX setup. All of the dual systems are being targeted toward multi-use audiences. The examples given were streaming/gaming, home server with failover, and CAD/rendering. The streaming/gaming option has already been implemented by system integrator CyberPower as the Pro Streamer.

Dual systems create a unique challenge when wiring and powering both systems. As a solution to this challenge, Phanteks is making and implementing a power splitter in the Mini-XL DS and Primo DS, available for retail purchase next week. The Power Splitter release is accompanied by another product, self-described within its “Power Combo” name. The Power Splitter uses a single PSU to power two systems. When powering off one system, the PSU doesn't disable and can remain operating for the second system. 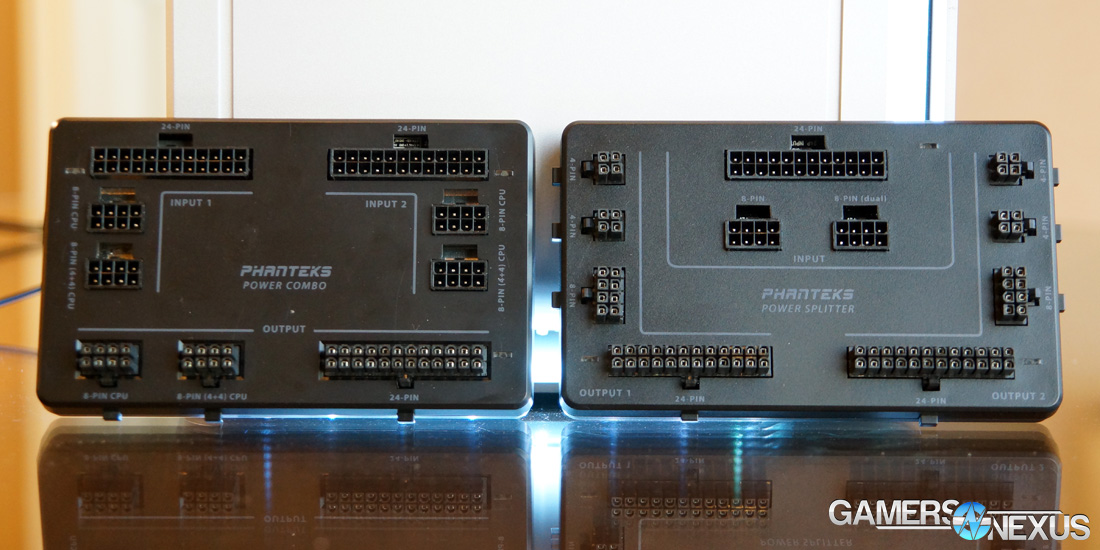 The Power Combo, which debuts late February or early March, will have a launch price of $40. Its purpose is almost the opposite of the Power Splitter. The Power Combo takes two PSUs and uses them to power one system. Phanteks provided the example that a 1600W and 1000W PSU could be combined (2600W) with a cumulative limitation of 4000W; granted, most US homes will be limited by the wall to ~1500W. And no system will draw that much power. But the example stands.

In a similar scenario, if a builder wanted to put together a system with a 1000W power demand, they could theoretically purchase the Power Combo and two lower cost 500W PSUs. We're not sure that we'd really recommend it, but it's possible. The device is also smart enough to load-share and, because of this, the Power Combo can be used for redundancy. If one PSU drops-out, the second one would immediately notice the load shift and react appropriately. This feature was demonstrated in the suite as Phanteks reps turned off a PSU and the Power Combo showed LED recognition immediately. A fitting scenario for the failover is a CAD/rendering machine. 3D renders often take more than 24 hours to complete. In a single-supply system, if writing to video files instead of PNGs for sequential render (which is what we do and recommend), a PSU failure could reset that render process. Using the Power Combo and two PSUs, the render would continue on in the event of a single PSU failure.

A final interesting note is that you can use the Power Combo and Power Splitter together, providing power and redundancy to two systems at once. 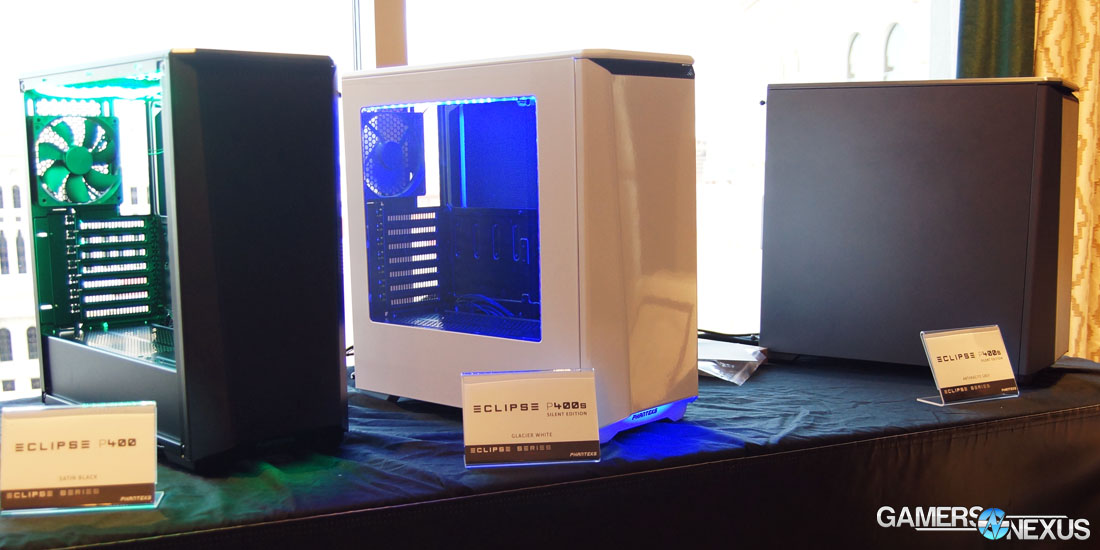 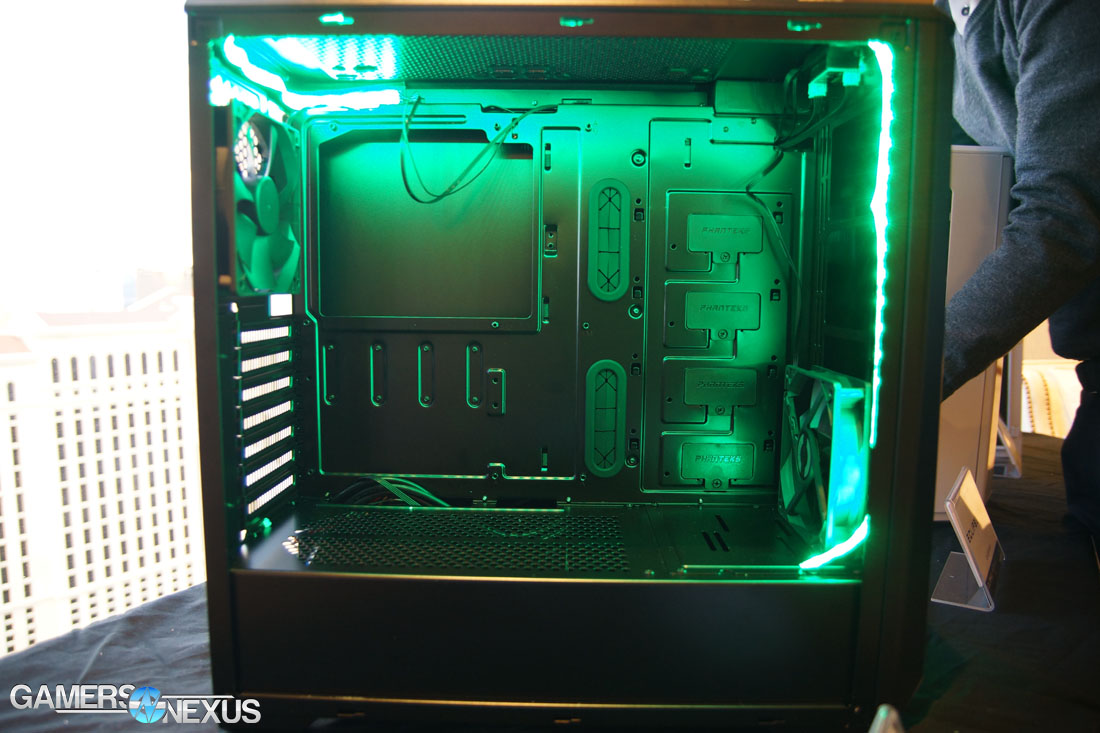 Along with Project 916, the other major announcement from Phanteks is an entire line of new cases – that'd be the Eclipse series. Available by late February/early March, the Eclipse line-up will feature three colors and two models. The P400 is very similar internally to the Pro M, but it lacks an optical drive bay and the PSU shroud fully encloses the side of the PSU. HDD bays are available as an additional cost. From the outside, the Eclipse 400 and 400S have a solid front panel and magnetic dust cover on top. 10-color lighting illuminates the bottom-front of the case.

The P400s is the same case as the P400, just with sound absorbing foam applied to the panels. The mesh on top of the case can be covered by either two sound damping covers or two dust covers (or a combination of the two). Both models will be available in Satin Black, Glacier White, and Anthracite Grey colors and have the option for a windowed side panel. The launch prices are $70 for the black and grey P400 and $80 for the white P400. Similarly, the black and grey P400s will release at $80, with the white at $90.

The final two product updates are applied to the Evolv ATX and Pro M. In late February, the Pro M will get a single acrylic side panel that moves the price from the original $80 to $90. The Evolv ATX takes that concept a step farther by upgrading to tempered glass on both side panels. The new Evolv ATX should launch in March with a new cost of $190.