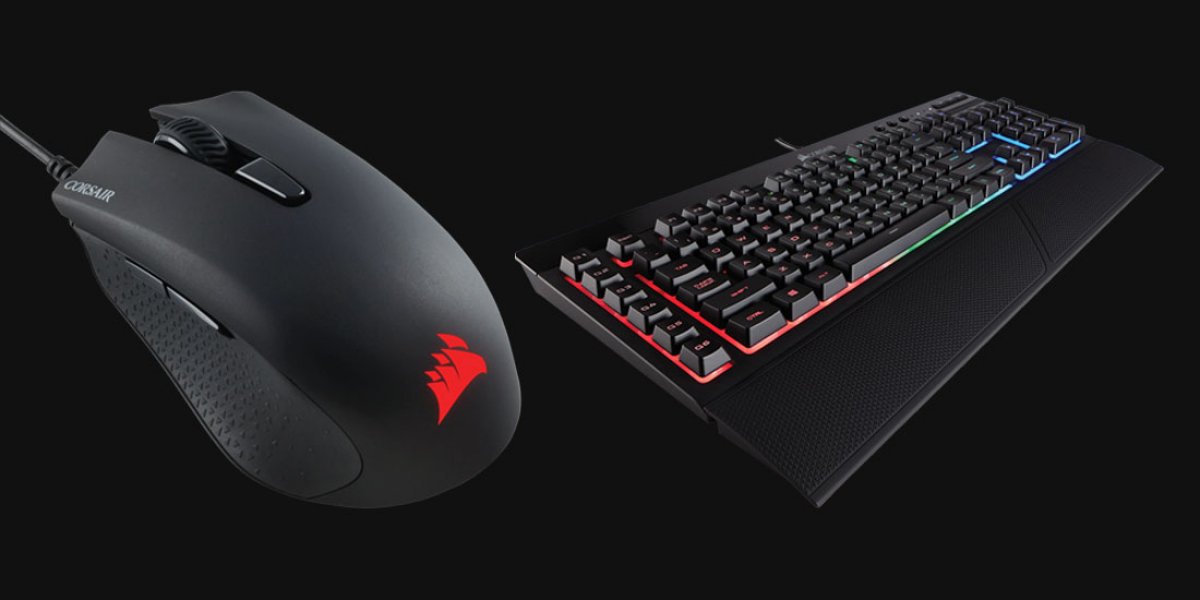 The HARPOON is a stripped-down FPS-focused mouse with six programmable buttons—initially, these are left, right, and middle-click, a DPI switch button, and forward/backward. The most distinctive visual feature is Corsair’s offset mouse cord, which leaves the mouse wheel exposed at the front rather than embedded into the body of the mouse. It is, like the K55, the cheapest and simplest of Corsair’s current offerings, but it still manages to offer all the basic features needed in a modern mouse (really, 6000 DPI is more than enough). Like most of the other mice in Corsair's “Lightweight Gaming Mouse” category, there are no adjustable weights, as the mouse is designed to be as light as possible—and it succeeds, tying with the Katar for Corsair’s lightest mouse.

Corsair mentions the “minimum noise and satisfying feel” of the keyboard, likely because it’s currently Corsair’s only non-mechanical gaming keyboard. That said, its price puts it in direct (favorable) competition with Logitech’s G213 Prodigy membrane keyboard, which is still hovering around its original MSRP of $70. It’s impossible to make a direct comparison without a K55 to test (it won’t be available until the 22), but there are still some specs to analyze: the K55 only has three color “zones” compared to the G213’s five, but with the addition of a removable wrist rest (Logitech’s is permanent) and six dedicated macro keys (Logitech uses the F-keys for macros). The K55 will have a less-than-smooth transition between colors as a result of its zoning, but that's potentially a minor point of concern for buyers of a $50 RGB keyboard. Our impression of the G213 was favorable at $70, which makes the K55 a bargain. Hopefully, more major brands will follow Corsair’s example and move into the budget market.