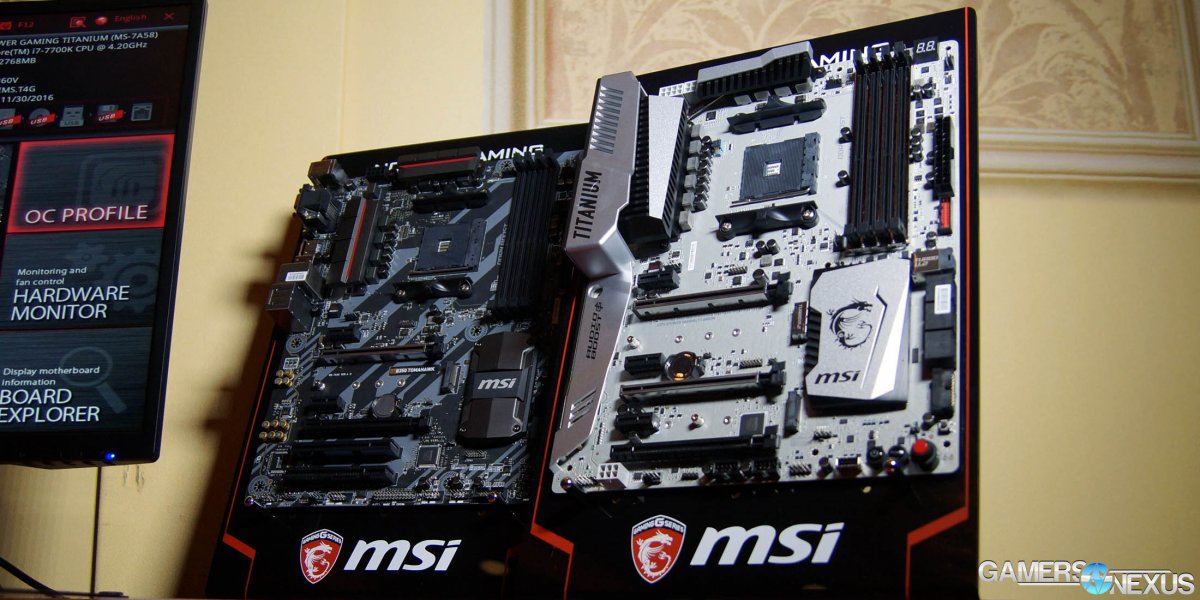 Regardless, the two boards we’re focusing on are the X370 XPOWER Titanium and B350 Tomahawk motherboards. 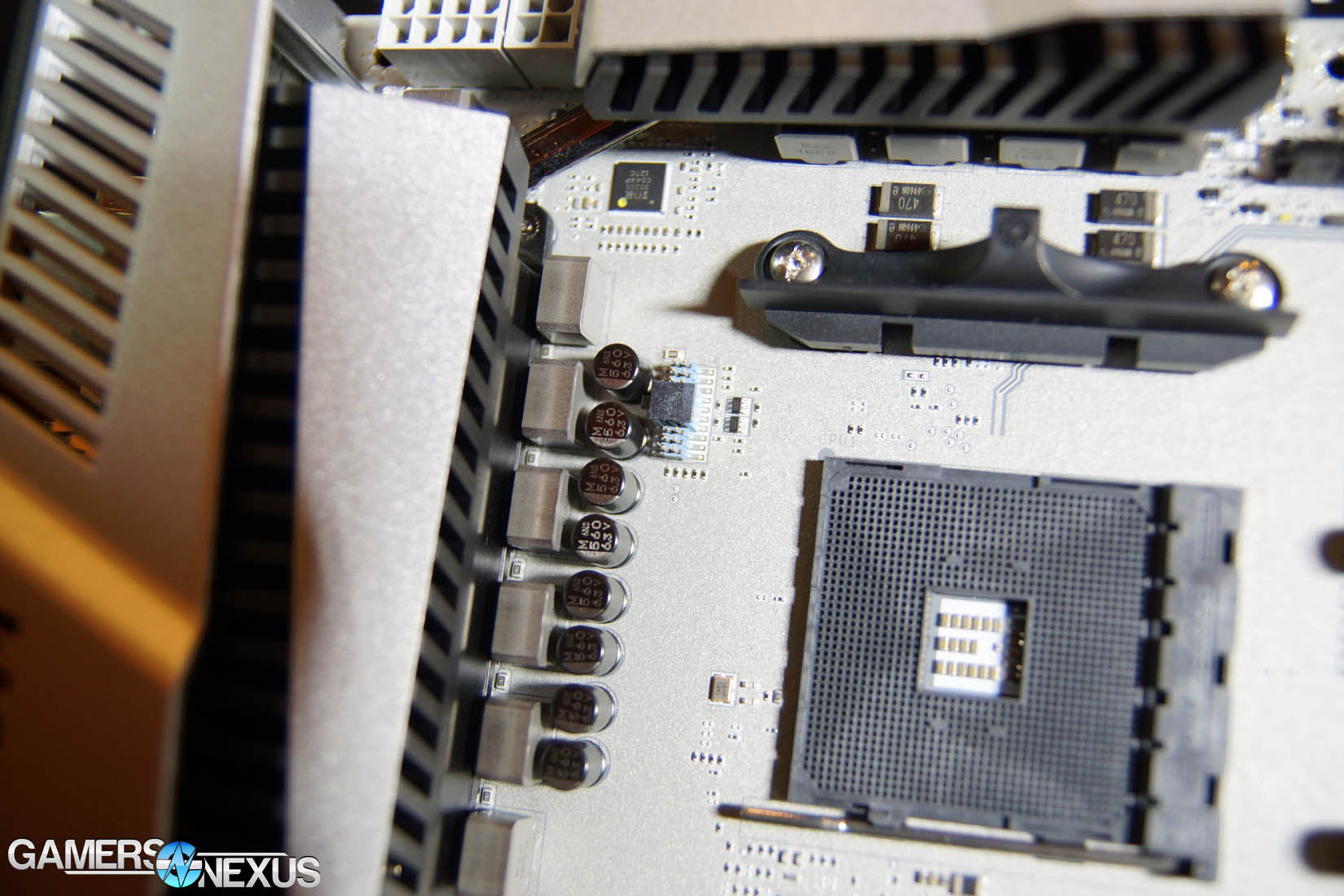 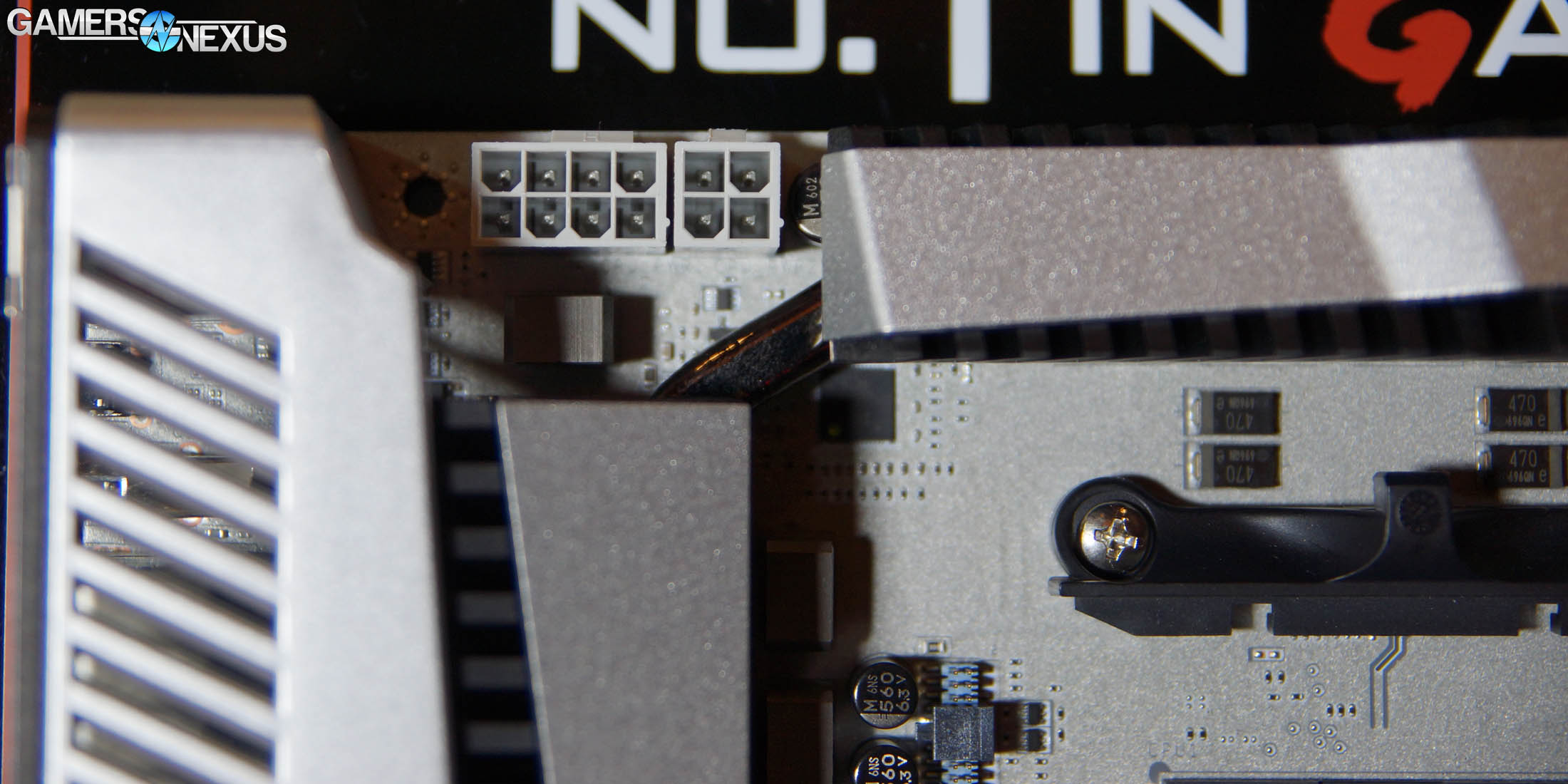 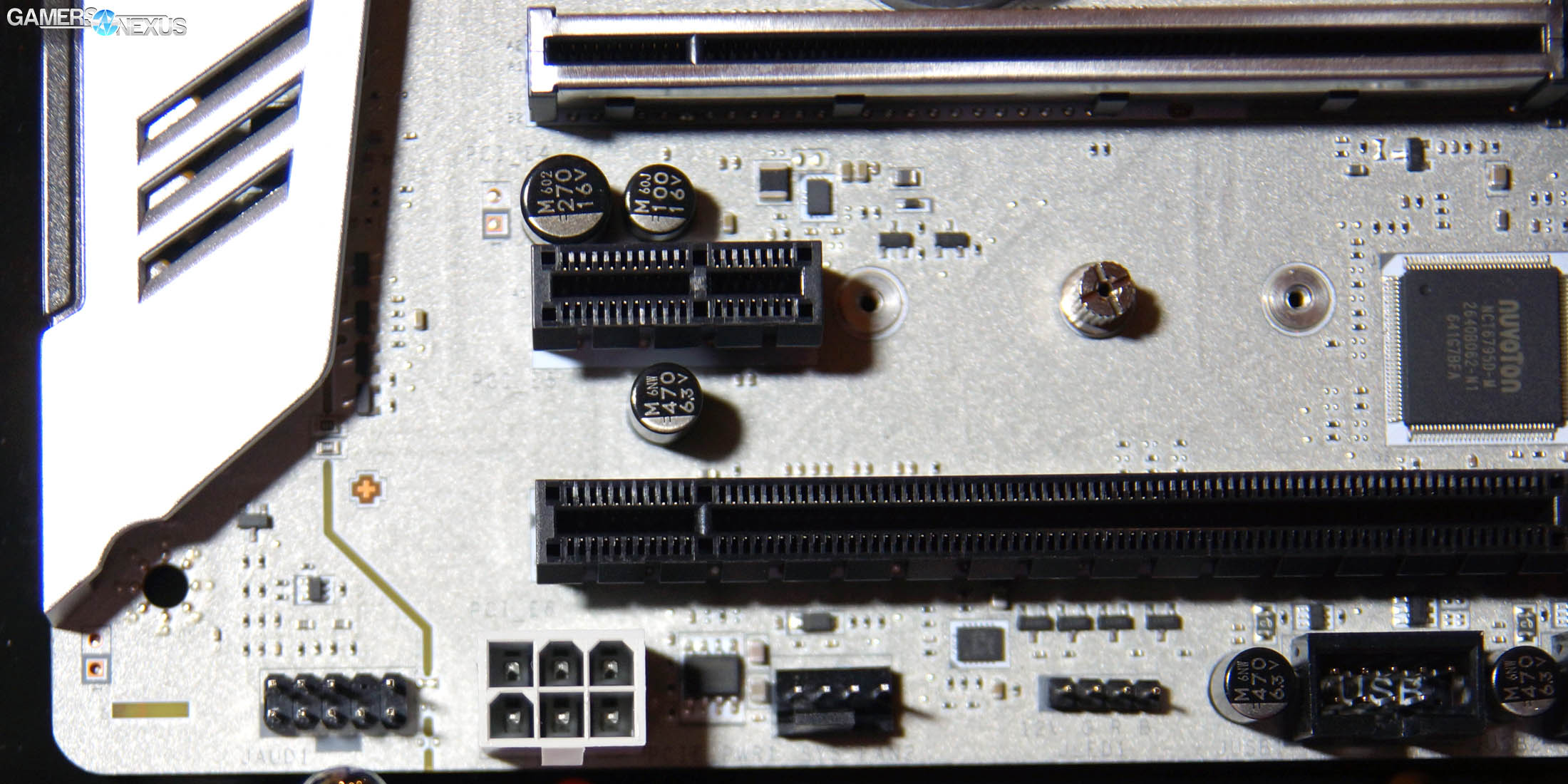 MSI’s X370 XPOWER Titanium has a few hidden secrets, but the obvious stuff first: The board supports USB3.1 Gen2 Type A + Type C connectors, 2x M.2, and 4xDDR4 DIMMs. Memory is supported up to 2667MHz (and up, with bigger OCs) and is accompanied by MSI’s “DDR Boost” branding. The motherboard accepts 1 x8 + 1 x4 power connectors for CPU power, allowing for additional power provisioned for overclocking tasks. In the same vein, an additional 6-pin power header is placed south of the PCI-e slots, used for extra GPU power (and to theoretically lighten load on the PCI-e bus). 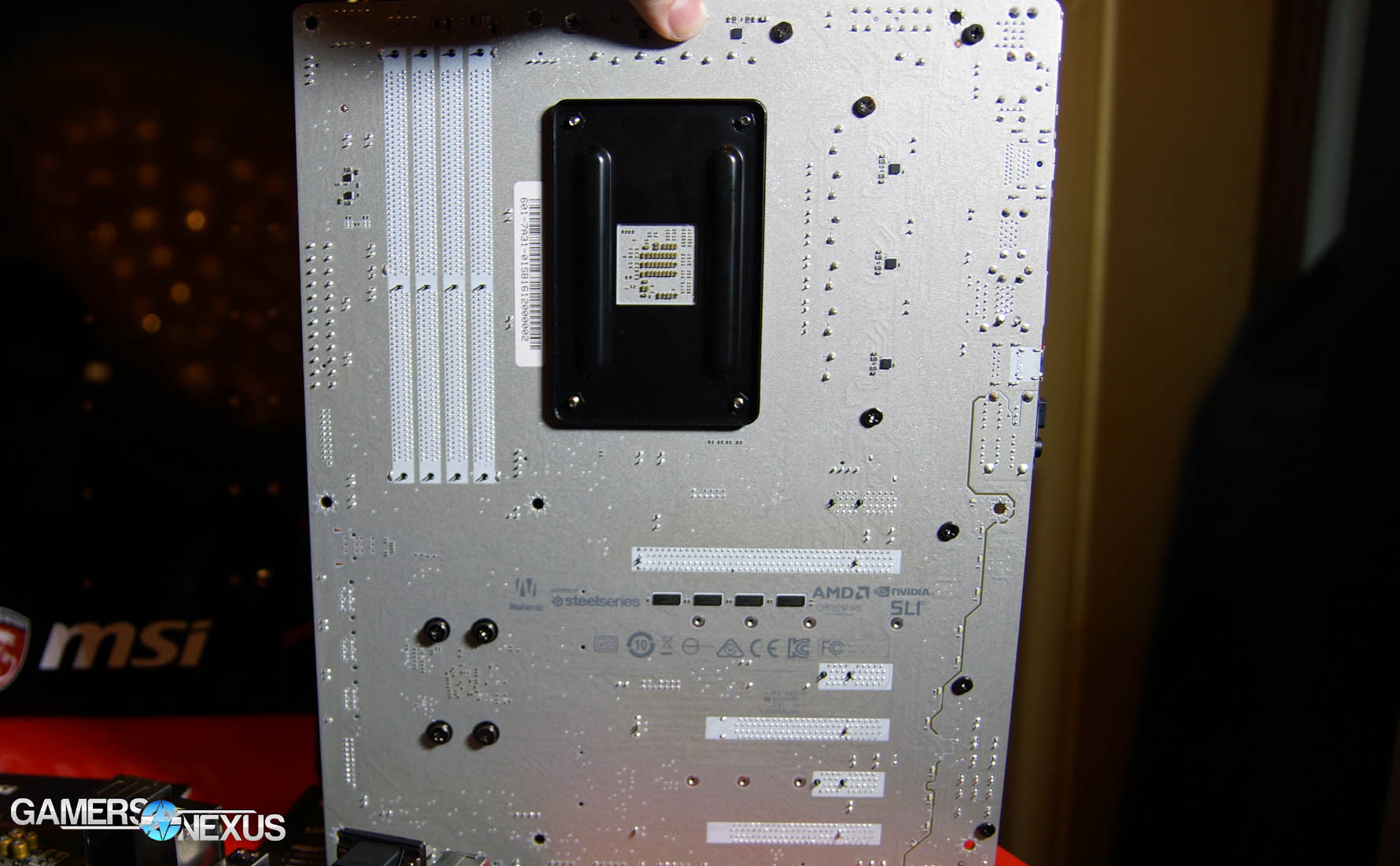 Looking at the back of the motherboard, we can see that it’s wired for the top slot to run 1 x16 PCI-e 3.0 configuration, with the next major slots operating at 2 x8. You may notice four chips located below the first PCI-e slot – those are for muxing, and allow the 1x16 lanes to become 2x8, according to MSI.

Also on the back of the board, you’ll notice additional mount points for the PCIe slots – those are for the “reinforced” version of the interface, theoretically reducing risk of ripping a slot out of the board by unscrupulous users. The memory, while it has this “armor” atop the slots, does not use its plating for physical reinforcement; instead, it’s for additional ground points to protect the RAM. That’s been done before and isn’t special, but worth note. This isn’t all that relevant to overall board quality and largely serves as a marketing checkbox. 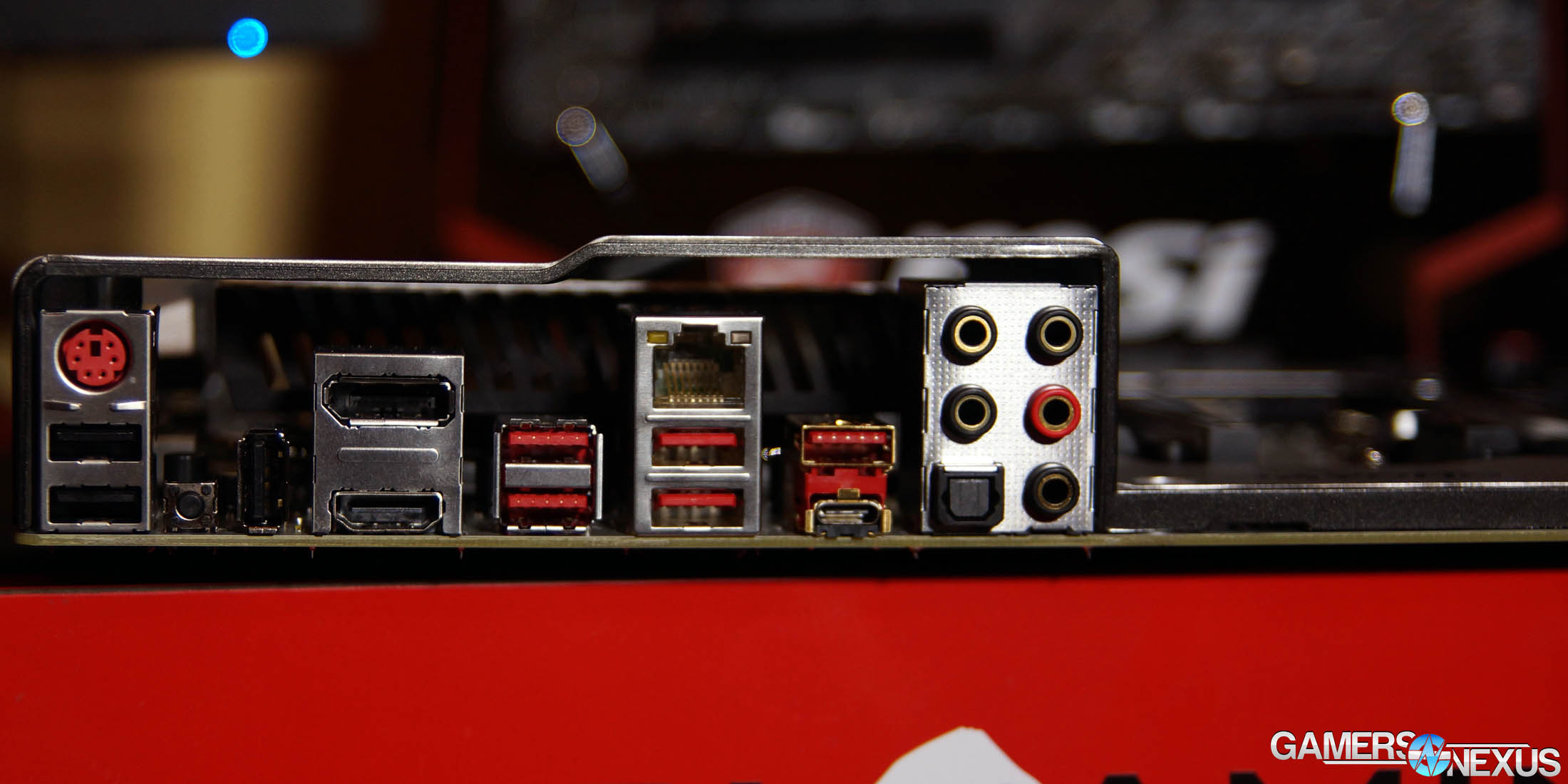 MSI’s other on-site motherboard was the Tomahawk B350, using the mid-range chipset that falls below the X370 in the stack. The Tomahawk B350 is simpler in its feature set and doesn’t appease overclockers quite as much, though still runs the basic MSI marketing adjectives and nouns – DDR4 Boost, armor plating, all that stuff.

The board has two full-length PCI-e slots, with 2x non-Express PCI slots below that (for legacy and sound card support, we’re told, and for developing markets in Asia).

The VRM design is also simplified, with the B350 Tomahawk running a 4+2 setup for core and GPU, respectively, with the core VRM capable of about 200A throughput.

We’ll cover the chipsets and motherboards in more depth as additional information rolls out.

Both boards have a targeted release date of “end of February,” from what MSI tells us. This likely coincides with a potential Ryzen launch, though we have no official information on that from AMD or elsewhere.